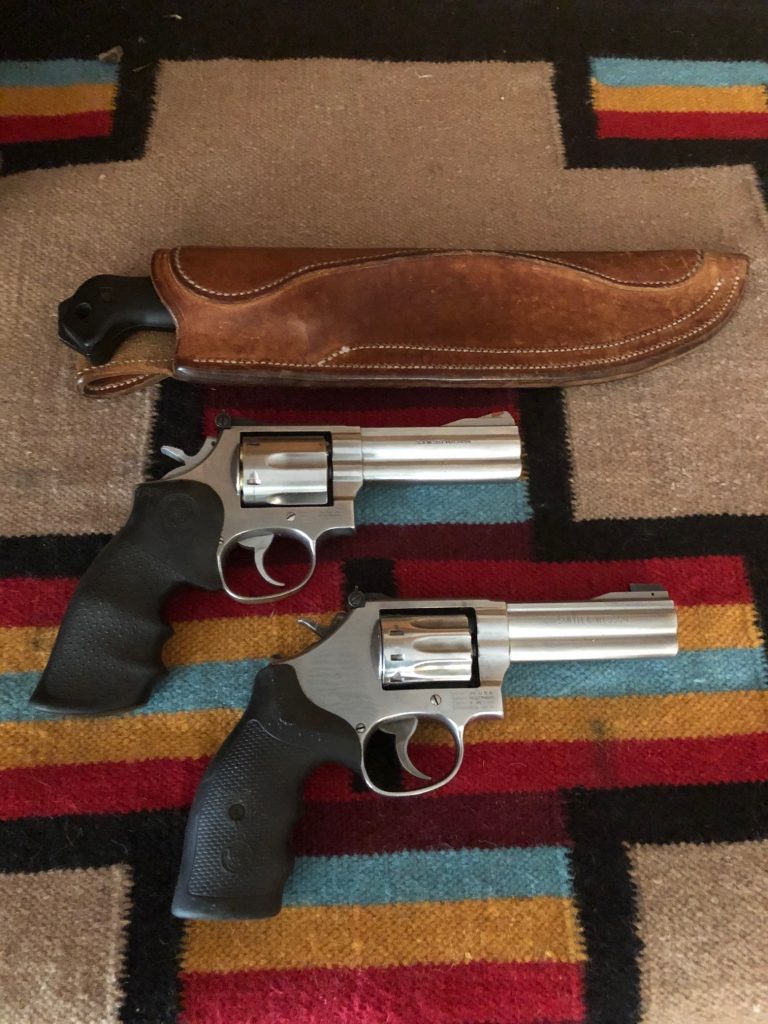 My EDC pistol is a slick-sided, striker-fired, light-weight, high-capacity polymer-framed 9mm semi-automatic for all the reasons that it should be. But if I’m carrying a belt gun out in the woods, it’s the S&W 686 stoked with six 158 grain .357 Magnum loads. Or if I want to do a little stump shooting, it’s the little brother, my 10-shot S&W 617 .22 LR.

The revolver is a classic weapon of the frontier. The Texas Rangers under Jack Hays adopted Sam Colt’s invention early, appropriating a consignment that had been purchased by the fledgling Texas Navy, but never issued. The five-shot revolver changed the tactical dynamics in the Rangers’ running fights with the Comanche.

Texas Ranger Samuel Walker proposed improvements to make the fragile implement more robust, resulting in the massive and powerful six-shot 1847 Walker Colt. And with that, the template was set. 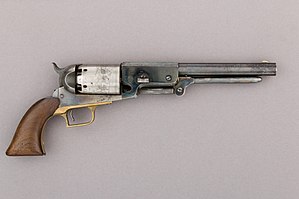 I was working in the firearms trade at Pachmayr in Pasadena, California, during the early days of the final transition away from revolvers toward the high-capacity semi-auto pistol. Despite a fair number of Jeff Cooper acolytes who insisted on the merits of the 1911 Colt Automatic Pistol and some devotees of the Browning Hi-Power (what the SAS ran), most gunslingers I knew were still devoted to the revolver.

We sold a whole bunch of Smith and Wesson Model 19s (Bill Jordan’s fave), S&W 586/686; and Colt Pythons with their gorgeous deep blueing and eye-watering price tags. The snub-nosed S&W 642 was tremendously popular for a pocket or purse gun, although obtaining a carry permit in California was basically impossible.

The revolver vs. auto debate was heated and the revolver men held the high ground.  Autoloaders jam. Revolvers are more reliable, etc. The FBI one-shot stop report favored the .357 Magnum 125-grain HP by a huge margin over any other round….

But the tide was turning. Pop culture played its part, as it often does. Just as Clint Eastwood’s Dirty Harry single-handedly created a market for the S&W N-Frame .44 Magnum, Mel Gibson’s 1987 smash Lethal Weapon made the Beretta 92 hot and sexy. The U.S. Military had already adopted it, as had some police departments, but the movie popularized it. In the hands of Martin Riggs, the Beretta was presented as something of a superweapon. Danny Glover’s stodgy old detective Roger Murtagh still carried a revolver, but the badass Special Forces veteran warrior wielded a REAL weapon. And he could shoot a smiley face in a target at 75 feet with it, so…

Here’s the scene that sold a thousand (plus) Berettas:

That beefy Beretta 92 fit my hand well, but I never particularly liked it. Our local indoor range (where the target shooting scene in Lethal Weapon was filmed, BTW) reported frequent slide-stop breakage after just a few thousand rounds. Not good. How the Beretta beat out the Sig Sauer P226 for the U.S. military contract is beyond me.

Speaking of the Sig… The P226 and the more compact P228 are the only semi-auto pistols that truly seduced me. Well, I did have a pretty big crush on a Kimber 1911 once. Sigh… The P226 came into my hand like it was custom made for me, and I shot it very well. It was too expensive for my budget, though, and I’ve never owned one.

Besides, I had my Smith & Wesson 586, bought (extremely lightly) used for a song within my first week at Pachmayr. This was also the era when Glock was first really making inroads into U.S. gun culture. Most of us scorned the “plastic gun” that terrorists could smuggle through metal detectors (they couldn’t), and who needs 17 rounds when 6 125-grain HP rounds will more than do the job (see FBI report)?

There were some enthusiastic adopters though, including one very nerdy, bespectacled Asian guy who worked at the nearby Cal Tech in polymer technology. He loved the things, of course, and bought one in every caliber and configuration we could order for him. He told us it was the pistol of the future, and we thought he was just a science geek and what did he know?

My friend and store co-manager Mark Hogan was a revolver man, too. Until the day he was invited to shoot a tactical course with the Pasadena PD, which had recently gone from the venerable .S&W Model 10 .38 to a semi-auto (don’t remember what flavor; probably the Beretta). Mark ran his revolver. He came back and said, basically, “Sorry, but revolvers are over.” Magazine capacity — and, more importantly, the ability to reload quickly and smoothly — rendered the six-shot revolver and speed loaders obsolete. Nothing like experiencing reality in action.

I’ve had that experience myself. My S&W 686 (my editor gave me the stainless version of the .357 Magnum as a bonus early in my freelancing career at The Nugget) is NOT an adequate modern tactical pistol. Not even close. The big revolver hangs up on seatbelts and such, and an average magazine change is quicker than a fast speedload. As it turns out, more rounds is mo’ better, and modern bullet design and materials  cleaned up the ballistic performance issues that used to plague the 9mm.

Not that I require validation for what must now be considered mostly an aesthetic choice, but I was most pleased (hat tip to the I’m With Roscoe Facebook page) to stumble upon an enduring European Cult of the Revolver.

From the online magazine The Drive:

The Groupe d’Intervention de la Gendarmerie Nationale, better known by its abbreviated name GIGN, which translates to National Gendarmerie Intervention Group in English, remains France’s premier counter-terrorism and hostage rescue unit. Since its founding shortly after the terrorist acts in Munich in 1973, GIGN has risen to prominence among the world’s counter-terrorism community. But one piece of gear in particular not only differentiates the unit from others, but it is also deeply ingrained in its lore and tradition—the revolver, and in particular, the French-built Manurhin MR73.

While it is available in several calibers, the classic MR73 chambering is .38SPL/.357 Magnum. I’ve never seen a Manurhin in the wild, but it is a legendary piece. The cylinder chambers are hardened to handle ridiculous pressures, giving the revolver the repute of being the strongest available. Like the magnificent German Korth revolver, the trigger is adjustable in both double action and single action, without negatively affecting the spring and the hammer strike.

The MR73 is reportedly capable of remarkable accuracy.

You know that the cockles of my heart warm at the use of words like “lore and tradition.” This bit of Continuity & Persistence pleases me:

The revolvers are issued to each GIGN member for symbolic reasons as well as utilitarian ones. A passage from a 2014 issue of the official Gendarmerie information magazine states:

“Respect of human life and fire discipline have always been taught to group members since inception, and each new member is traditionally issued with a 6 shot .357 revolver as a reminder of these values.” 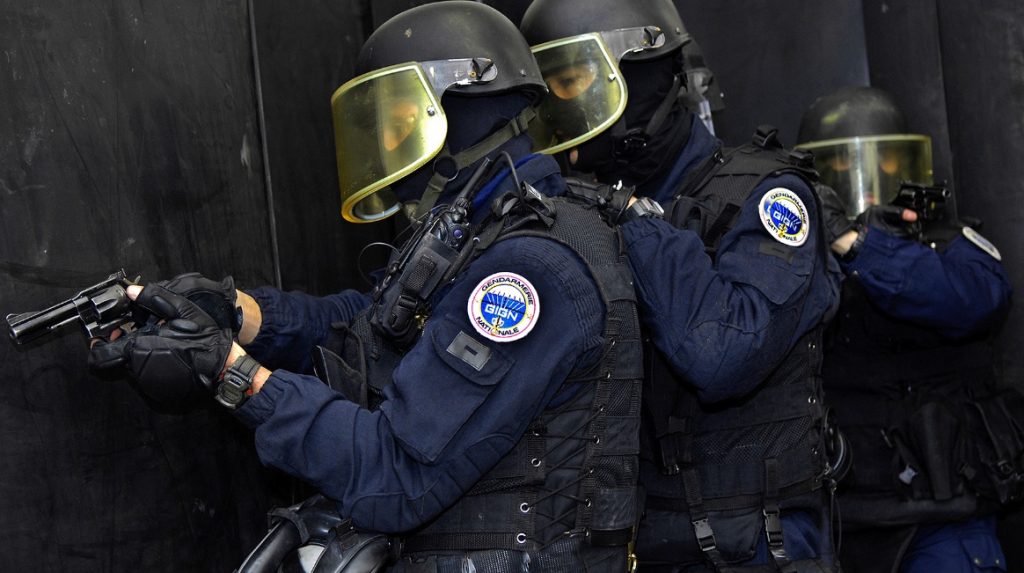 The Drive piece lists a number of tactical advantages of the revolver, which basically track with the classic ones: Revolvers go bang almost perfectly reliably, they’re hard-hitting, and they don’t have a slide that can hang up in tight quarters. But, honestly, you have to stretch a bit to identify a circumstance where a revolver is clearly superior to a semi-auto pistol.

Clearly, GIGN sees it as a lightsaber of sorts — an elegant weapon whose time may have largely passed for all but the most capable operators. But for those who can employ it with extreme efficiency, it still remains a potent, if not superior in some respects, tool for many applications.

Lightsaber, eh? I may have different cultural touchpoints, but that’s a nice illustration. For me, the revolver is like the 1952 Vincent Black Lightning motorcycle in the great Richard Thompson song:

Nortons and Indians and Greeves just won’t do

As Justin Carroll, a MARSOC veteran of Iraq and Afghanistan and founder of the website RevolverGuy.com put it, the Smith & Wesson 686 is a gun “to ride the river with.” 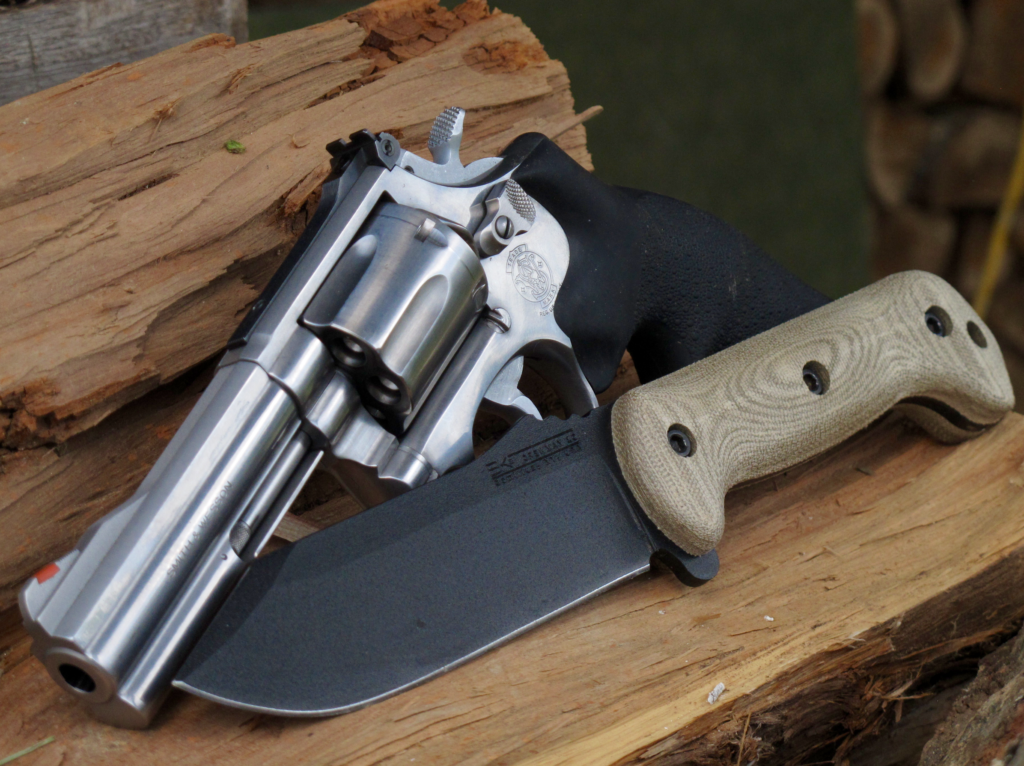 Justin Carroll’s piece on the S&W 686 “A Gun To Ride The River With” is illustrated by the revolver and another of my favorite implements: a Becker knife. Obviously Justin Carroll is a brilliant guy.

When they light my pyre on a longship and push me off on the long night journey down the river, I wish to be accompanied thus: My Breedlove guitar; my Baldwin hat; my CZ rifle; my CZ side-by-side shotgun; my Becker BK 9; my Wetterlings woodsman’s hatchet — and my Smith & Wesson 686 revolver.

Those .357 magnum rounds should be cooking off any second now…

Previous Post: « Remembering The Armed Standoff In Oka — Summer 1990
Next Post: ‘I Have Been But A Common Man’ »