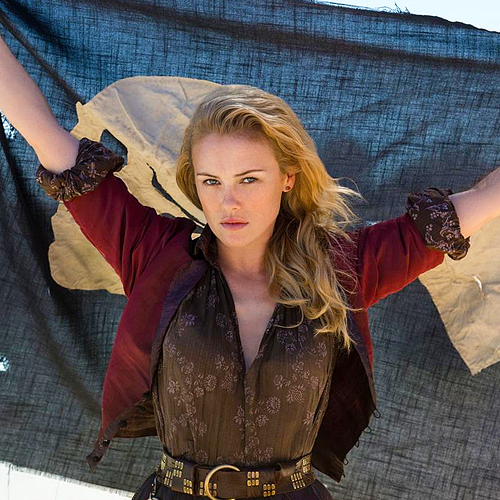 “GIVE US YOUR SUBMISSION AND WE WILL GIVE YOU ALL THE COMFORT YOU NEED.’

“I CAN THINK OF NO MEASURE OF COMFORT WORTH THAT PRICE.”
—Captain Charles Vane, Black Sails

“These were more than just a few thugs knocking over liquor stores.”

Drink up me hearties, yo ho! It’s International Talk Like A Pirate Day!

I shan’t annoy you with an entire post written in Pirate Pidgin. I shall, however, take advantage of the commemorative moment to indulge in once again proclaiming my rum-besotted ardor for Black Sails, which I consider to be among the very finest frontier dramas ever created. Marilyn and I have launched another cruise through its tight , four-season run.

(I may also spend the day working on my Charles Vane growl, which Marilyn seems to find quite sexy).

Entertainment journalist Lauren Sarner, who has long been a stalwart advocate for this under-appreciated STARZ drama, once referred to it as “Pirate Deadwood,” and the tall cavalier boot fits.

Treasure Island lore informs the long arc of the tale: Who was the legendary Captain Flint? Whence came Long John Silver? How and why did the treasure end up buried on Skeleton Island? 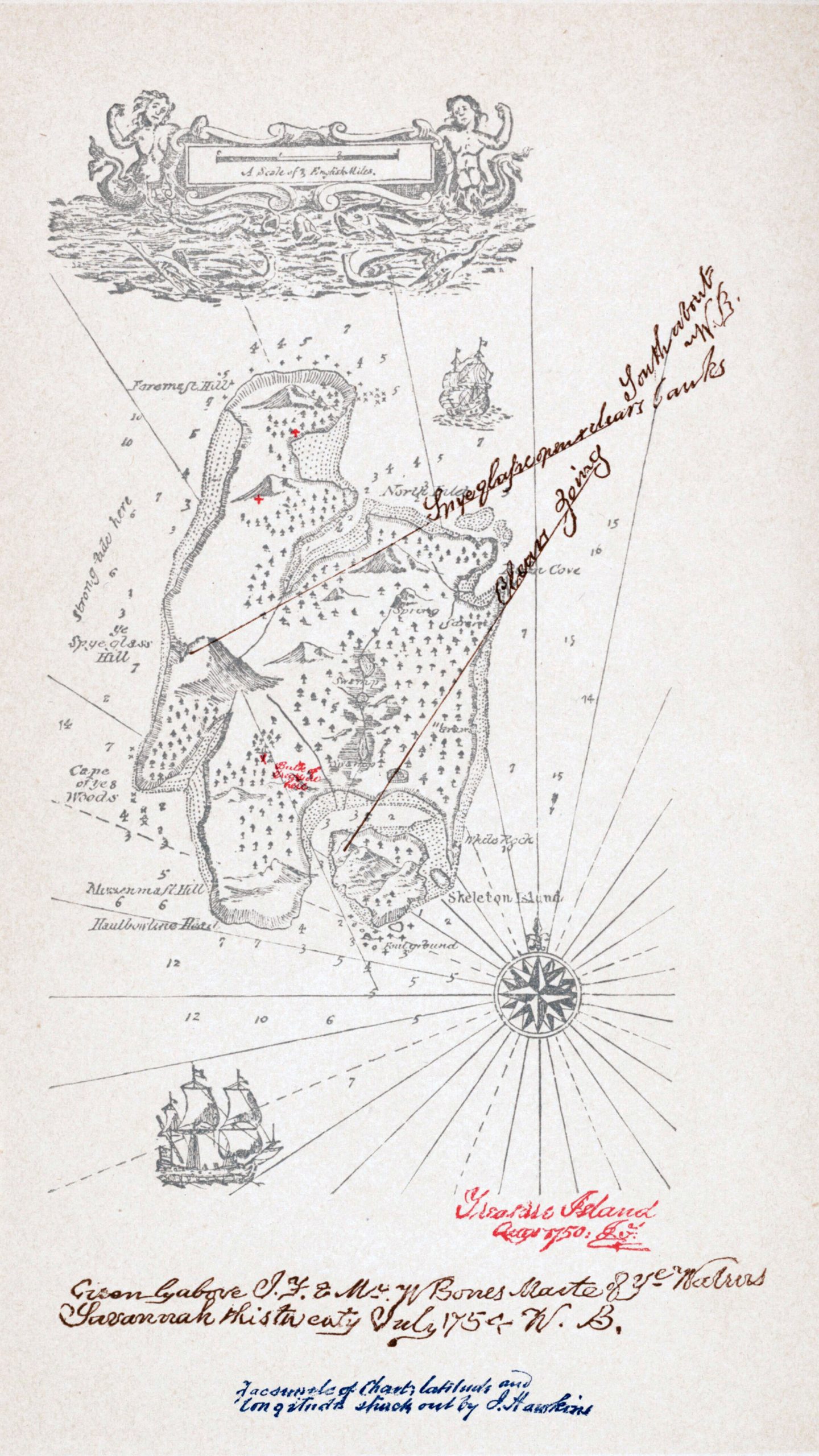 Who is not captivated by a map to pirate treasure?

The writers skillfully weave Treasure Island lore into the historical context of the very real pirate “republic” that arose on New Providence Island in the years leading up to 1715 (the year that Black Sails opens), before the pirate hunter Woodes Rogers reasserted British control. They very obviously plundered the rich cargo of Colin Woodard’s 2004 popular history, The Republic of Pirates: Being the True and Surprising Story of the Caribbean Pirates and the Man Who Brought Them Down. A most absorbing read.

In common with a far more famous (and to my mind lesser) swashbuckling cable yarn, the action revolves around a deadly game of thrones, as Eleanor Guthrie struggles to maintain her position as the commercial linchpin of the pirate economy, while pirate captains vie for dominance of Nassau — each always insecure in his own position because crews elect captains and expect appropriate constituent service. A captain can be deposed by a simple vote.

And always looming is the eminence of the British Empire, as civilization intrudes upon this barbarous haven of free men. 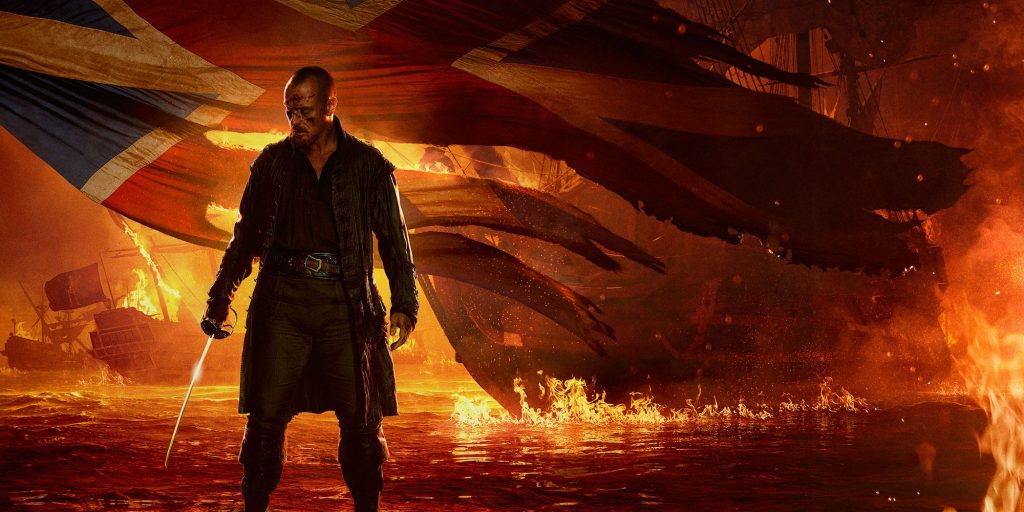 We’re not used to thinking in terms of the politics of piracy, but there was significant political, cultural and ideological content to the ad hoc polity that evolved in the Bahamas. Nassau was not in a state of anarchy. The Pirate Republic — in the show and in reality — operated under a code of conduct, and Blackbeard himself was at one point appointed a magistrate to enforce it. Men who came out of the brutally oppressive environment of either the Royal Navy or the British merchant service demanded and achieved a level of democracy that was unparalleled in the era — a harbinger of the rebellious spirit that would thrive in the so-called New World.

“(I)n all the pirate vessels, as they were rebelling, as it were, against the conditions on these merchant ships, they sort of turned the world upside down in the way they operated their own vessels and by extension this pirate republic they created in the Bahamas. They were extremely egalitarian. Their captains were actually appointed by a vote of the crews and to be deposed by a vote of the crews. They only had absolute power when they were actually in combat.

“The plunder was shared remarkably equally, with the captain only getting usually, say, a share and a half or two shares for each ordinary seaman’s share, whereas on a merchant vessel or a regular privateering vessel, it could be, you know, 14 or 15 shares to one.”

Actor Zach McGowan, who portrays the ferocious, feral and ardent-hearted Captain Charles Vane struck with the point on the subject:

“As much as the pirates and cowboys of American history are kind of the beginnings of America. I feel like it started with the pirate rebellion in the Caribbean. The first time me and [showrunner] John Steinberg spoke about the role, he asked me who I thought Charles Vane was. I said, ‘He’s the first American.’” 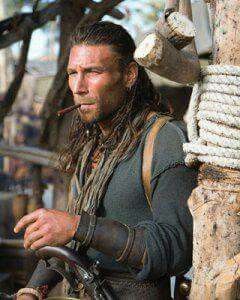 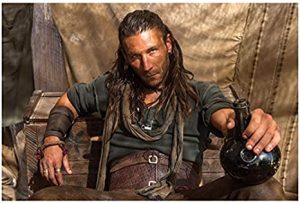 Black Sails gets the fundamentals of the historical setting right — and the intimacy  serves the excellent ensemble cast well. As Woodard notes:

“(T)hese fellows all knew each other. It was one, sort of, clique of people, albeit they served together. They set up a sort of pirate republic together, and it was unusual in that in addition to, sort of, the common thievery of piracy, this group of people also seemed to be engaged in some sort of conscious social revolt, as it were.”

The revolt included another element that can never be overlooked in 17th and 18th Century British history: Some of the pirate rebels were Jacobites — supporters of the exiled Stuart dynasty. The Jacobite threat was critical factor in British imperial policy up until the final crushing of Bonnie Prince Charlie’s army in 1746 — 31 years after the events of Black Sails. The presence of Jacobite agents in the Caribbean raised the stakes for the Hanoverian monarchy considerably.

I was delighted when the show touched this element (albeit lightly).

The show should not be taken as historical. It mixes Treasure Island lore and the clay of history in a brew of politics, violence and self-conscious legend-weaving that concocts what it ultimately should and must be: simply a pirate yarn. It’s a yarn that is at its foundation about the power of legends and stories. As Calico Jack Rackham himself says…

“A story is true. A story is untrue. As time extends, it matters less and less. The stories we want to believe, those are the ones that survive, despite upheaval and transition and progress. Those are the stories that shape history.”

Sexual freedom (or licentiousness if you prefer) was also in play in the Pirate Republic, an aspect Black Sails is more than willing to explore (or exploit if you prefer). 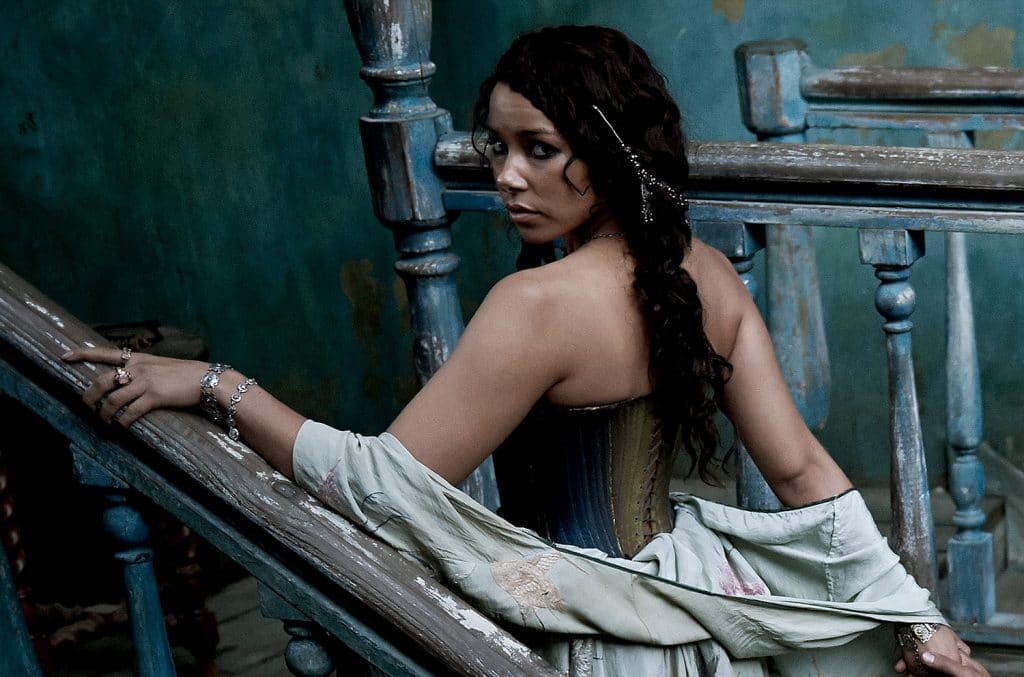 The carnality inspired by a short-life-but-a-merry-one culture is a legitimate element of any depiction of the time and place. Black Sails absolutely indulges in a little of the cable-TV propensity for viewer-grabbing salaciousness (particularly in Season 1), but it also effectively uses the complex sexual relationships between the characters to drive their individual stories and the tale writ large.

The Caribbean Basin of the early 18th century was as polyglot a world as has ever existed. Europeans of various extraction mixed with indigenous peoples, and Africans — both slave and free — and already by 1715 there was a very large population of mixed race. Black Sails accurately depicts the reality that people of African descent could ascend to positions of equality and prestige in the pirate community. And a subplot involving “maroons,” a self-governing colony of escaped slaves, weaves seamlessly into the broader tale. 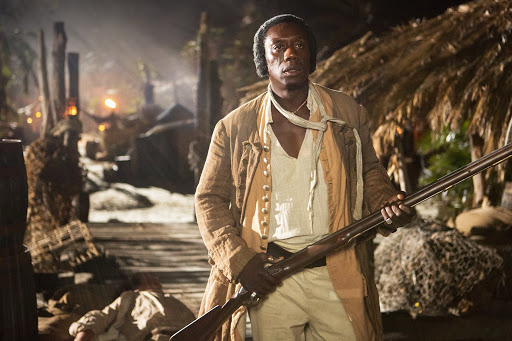 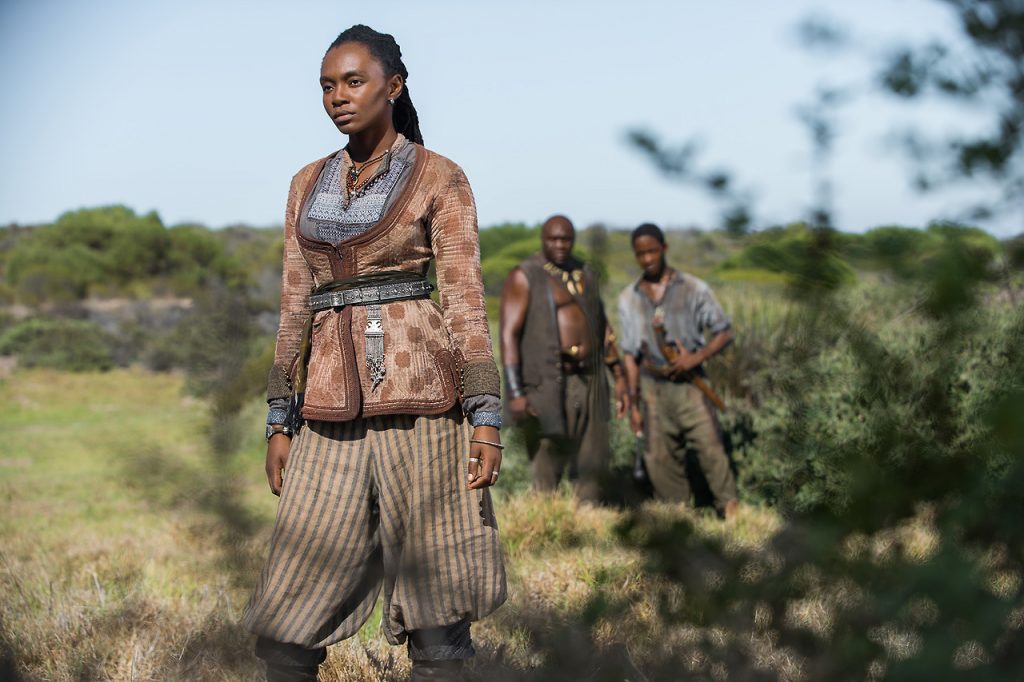 While it works against some Pirates of the Caribbean-type pirate movie tropes, Black Sails is still heavily stylized. The ships are big and majestic, and there are big sea battles with thundering broadsides the likes of which pirates strove mightily to avoid. I do like it that the musket and the boarding ax are given their proper respect as pirate weapons — it’s not all cutlasses — and there are some nifty tactical moments that surely felt the influence of historical and technical advisor Benerson Little, whom I hold in high esteem. 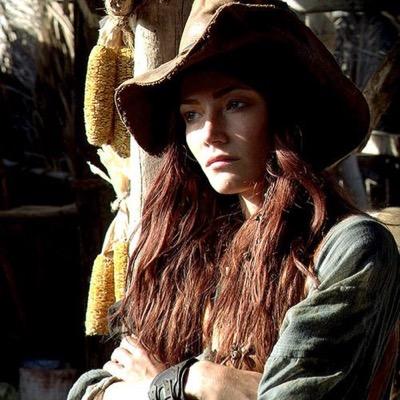 This is not historical — and offends my kapelophile sense of aesthetics generally. Yet it remains a quibble. It’s a good-looking show, from the actors to the landscape (filmed in South Africa; sigh…)

Season 1 is a bit uneven, both in pacing and tone, as the show establishes itself. Season 2-4 are really first rate — and the story ends exactly when and where it should.

Black Sails is available through the STARZ app, the STARZ channel on Amazon Prime, on DVD and on the cheap through HULU (with commercials).

If you want to go full nerd on this, as I am obviously wont to do, spend some time with the excellent Fathoms Deep Podcast. Daphne Olive and Elizabeth Rae Stevens take an entertaining and insightful deep dive into the blue waters of Black Sails over 75 installments. They’re good company on a long drive or when the still sea conspires an armor and you’re becalmed in the Horse Latitudes.

It would be remiss of me not to mention (again) Bear McCreary’s outstanding soundtrack. I listen to it at work almost every day.

I’ll leave you to your rum with these, my favorite pirate songs. The first is from the estimable Swedish troupe Ye Banished Privateers…

The last is from Gaelic Storm, a song my band covers with unseemly, piratical verve…