He closed his eyes in the shade, with the scent of roses in his throat, and let the music roll through his soul, a saraband which caressed the face of death as lovers caress the face of their beloved. The darker instrument overwhelmed his senses with waves of ecstatic melancholy, in one moment brutal with exaltation, as delicate as candlelight in the next. Nothing he had known, not merely heard but known, had prepared him for such transcendence. What possessed him to allow his soul to yield to its force? What sorcery could conjure such specters and send them roaring through his heart and on and away into an eternity nameless and unknown? And when each note ended where did it go? And how could each be and then not be? Or did each echo until the end of all things and from one far rim of Creation to the other? 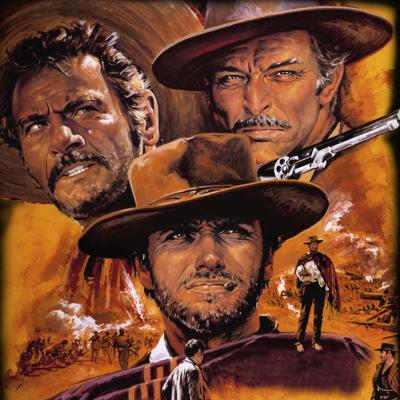 The music of Ennio Morricone forms an integral part of the landscape of my imagination. I was drinking in the strange, subversive, stylized Westerns of Sergio Leone at the same time I was imbibing the fantasy works of Robert E. Howard and the pulp Westerns of Ben Haas (John Benteen) and Gordon D. Shirreffs in great draughts — and Morricone’s sound seeped from one mythic realm into another, imbuing everything it touched with a permeating weirdness evocative of a desert mirage.

Ennio Morricone, the Oscar winner whose haunting, inventive scores expertly accentuated the simmering, dialogue-free tension of the spaghetti Westerns directed by Sergio Leone, has died. He was 91.

The Italian composer, who scored more than 500 films — seven for his countryman Leone after they had met as kids in elementary school — died in Rome following complications from a fall last week in which he broke his femur…

“The music is indispensable, because my films could practically be silent movies, the dialogue counts for relatively little, and so the music underlines actions and feelings more than the dialogue,” Leone, who died in 1989, once said. “I’ve had him write the music before shooting, really as a part of the screenplay itself.”

My favorite performances of Morricone’s work are those of the brilliant Danish National Orchestra.

Previous Post: « El Indio — The Most Interesting Man In The World
Next Post: A Long Haired Country Boy Has Gone Up The Trail »