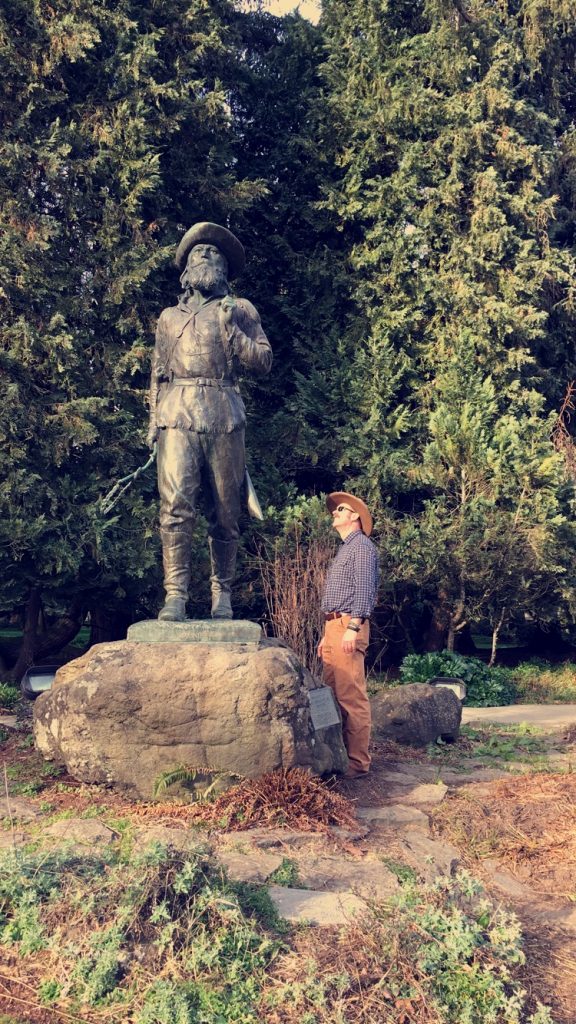 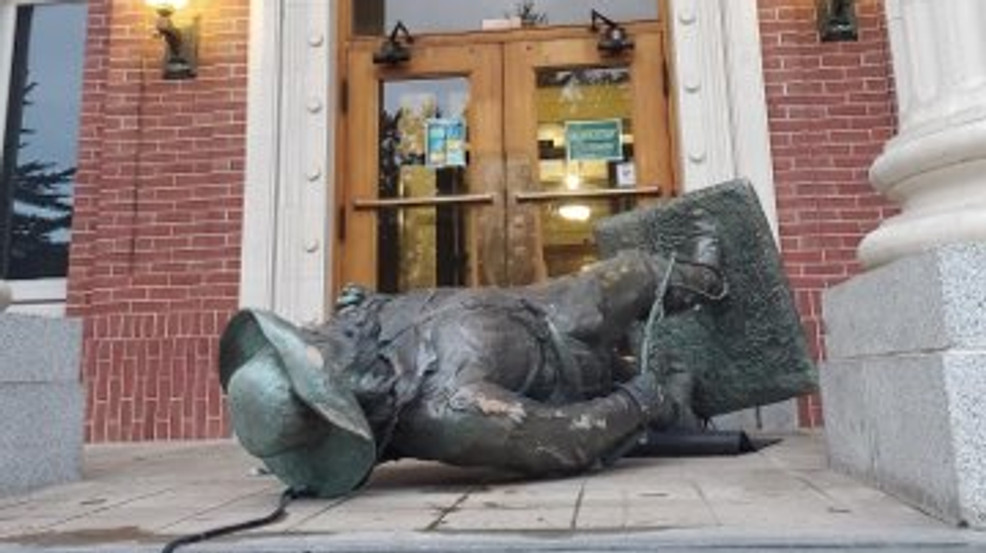 The quest for Year Zero continues.

EUGENE, Ore. (KMTR) — Two historic statues have been torn down on the University of Oregon campus this weekend — the Pioneer Mother and the Pioneer outside Johnson Hall.

I’m sure the vandals are simply seeking a deeper “conversation” about frontier history. Happy to oblige. I’ll wait.

This sculpture, located across from Johnson Hall, in between Friendly and Fenton Hall, was dedicated with great ceremony in May 1919. The sculptor, Alexander Phimister Proctor (1862-1950), used a trapper from near Burns, Oregon, as his model. The 1918 bronze statue, mounted on a base of McKenzie River basalt, was a gift of Joseph N. Teal, Portland attorney.

In the early twentieth century there was a movement across the country to install pioneer statues to valorize the achievements of pioneers. Proctor, the sculptor, made several of these monuments. He had the idea for this statue and searched for ten years to find the right model. After he found J.C. Cravens, he went to Joseph Teal, who agreed to fund the statue and it became the fist statue on campus.

In 1919, the President of the Oregon Historical Society made a speech at the dedication that extolled the virtues of the Anglo-Saxon race. In the speech he stated, “the Anglo-Saxon race is a branch of the Teutonic race. It was and is a liberty-loving race. It believes in the protection of life and of liberty an in the rights of property and the pursuit of happiness. This race has large powers of assimilation, and its great ideas of liberty and of the rights of mankind caused other races to become a part of it, so it became a people as well as a race.”

Due to these controversial statements, various students and faculty have worked to bring awareness about this issue and reveal the history and statements surrounding the statue. See the “related sources” section below for a list of these articles and research projects.

As additional projects and reactions to the history of the statue are completed we will share them here on this project site.

vandals are not interested in additional projects and reactions. They don’t want to engage with history — they want to erase it. Dialogue, after all, is liberal appeasement; weak tea. That won’t get us to Year Zero — the erasure of history and culture and replacement with a new, revolutionary culture. Or call it Year One, like the French Revolutionary Calendar, if you prefer.

Zero or One — just remember where this kind of mentality leads. 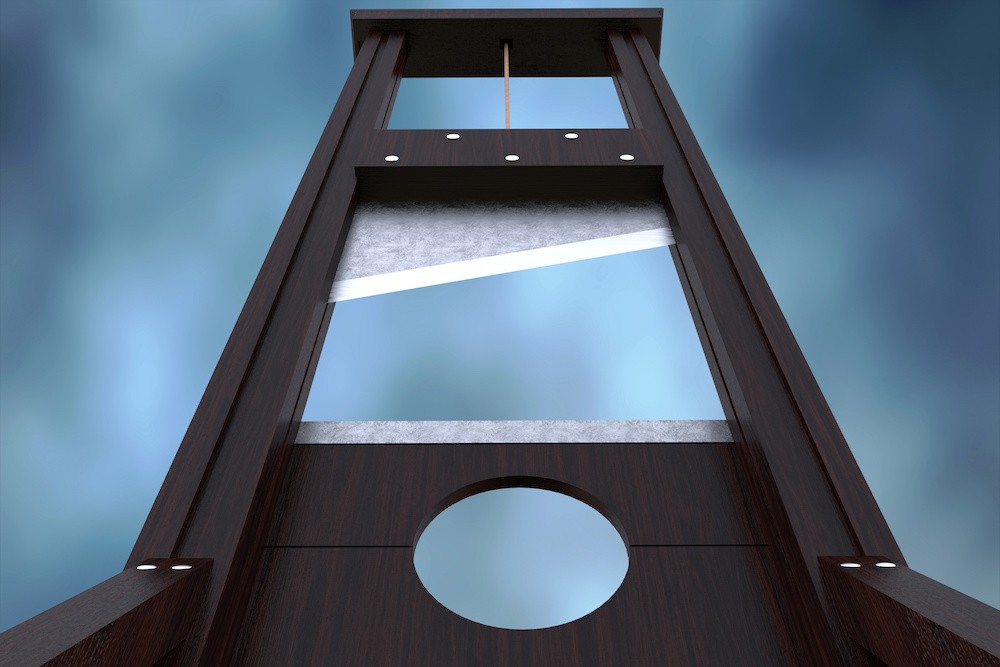 I will engage with anyone who acts in good faith on the fraught topic of frontier history. It is, after all, my life’s work.

I am no triumphalist. We can and must look back from our vantage point in the 21st century with as much clear-eyed resolution as possible and seek to truly understand what happened and why. And part of that clear-eyed resolution must be a willingness to account for the cost of the creation of the world in which we live, in which we are so ill at ease, plagued by our own hard-won civilization and its discontents.

The President of the Oregon Historical Society, speaking in 1919, represented a triumphalist view of history that was common then and rejected now. I am no triumphalist. Nor am I an iconoclast — and I won’t tolerate their kind.

I continue to stand by the introductory statement I made on this site back in 2011:

It was an age of conquest. From the 18th Century through the first part of the 20th, the Great Powers, including the young United States, scrambled first to map the wild hinterlands of the world, then to paint that map with their national flag.

From North America to Africa, Australia to Central Asia, bold men chased riches in land, furs, minerals, timber — and the pure prestige of planting the flag in a “howling wilderness.” That used to be the stuff of triumphalist history and patriotic legend. Nowadays, we see things differently. Today, we don’t like to think much about the way the world we live in was made, about the graves our homes are built upon. Looking backwards in comfort and security, through a lens of politcally-correct piety, we condemn the men who “stole” the Americas, the lands of Africa, the continent of Australia.

It is right to acknowledge the cost of conquest, both in human terms and in terms of environmental degradation. The cost was high. Whole peoples disappeared, ravaged by war and even more by disease. And these bold men with rifles shot whole species to the brink — and past the brink — of extinction. Yet to regret this world historic burst of exploration and conquest and condemn the men who pushed it forward is the rankest kind of hypocrisy. Might as well condemn the tectonic plates for shifting.

It’s true that the “wilderness” wasn’t empty. Native peoples thrived there, with a fierce love for their homeland every bit as potent as the land lust that drove the European interlopers. It’s also true that those native peoples had displaced others.

I have no desire to be drawn into a Culture War, and I reject those who insist that I have to decide “which side of history” I’m on. I don’t look at history that way — history is multifaceted, contradictory, paradoxical, weird and wonderful. But I tell you this: I seek to live the values of the Frontier Partisans with whom I have ridden the whole of my life — men of many a creed and color — and if culture warriors insist on pushing me into a corner, I will respond in a manner that the bastards of all nations would understand. 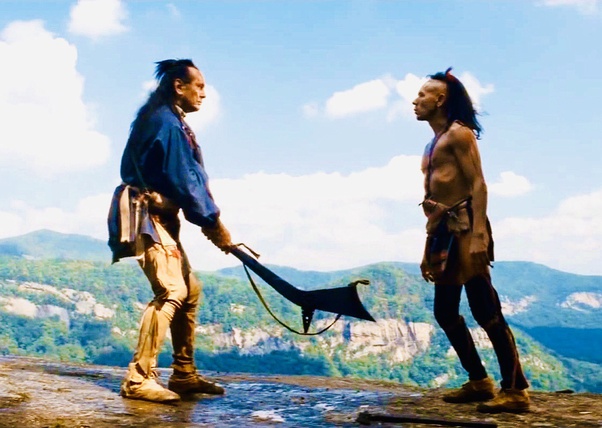