Lowlands get settled first. Later arrivals head for the hills. The mountainous backcountry becomes the outback, the frontier. It takes hard, hardy people to make it there. In Australia by the1880s cattle and sheep stockmen had moved their herds into the Snowy Mountains in the summer to graze the high country. It was a hardscrabble life up there in the Australian Alps. 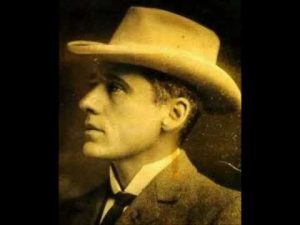 And a fellow named Banjo Patterson published a poem in 1895 about that era that became famous, The Man from Snowy River.

Eighty-seven years later, in 1982, a feature film about the well-know tale of the Australian frontier was released. Talk about being late to the party: By 2020, neither your writer nor my wife had yet seen the movie! No good reason. We hadn’t avoided it; just hadn’t seen it. But the pandemic has a cinematic silver lining.

For after we’d completed Outlander and Poldark, we started searching for movies to watch. Scanning the options one night: There it was! Thirty-eight years on, I’m happy to report that that grievous gap in our Frontier Cinema has been filled!

And what a fun tale it is. Writer and poet Banjo Paterson grew up on his mom and dad’s sheep farm in that region of New South Wales. There he saw drovers, bullock teams, horse races and backcountry polo. It was a rich environment for a kid, leading to a love of horses and fueling the stories he later wrote.

Paterson’s famous tale tells of a young man of that mountainous outback who gets orphaned when his widowed dad dies in a logging accident. Unfriendly frontier horsemen tell Jim Craig that he can’t make it alone in the outback, and needs to move to the low country to prove himself. Craig gets a job on the ranch — “station” in Australia — of Harrison, a hard-bitten, opinionated tyrant with a pretty late teen-aged daughter named Jessica. The stage is set for clashes between the headstrong, stubborn young folk and the headstrong, stubborn Harrison.

The crux of the movie concerns a massive riding effort to capture a herd of brumbies — free-ranging feral horses — into which two valuable horses, one Craig’s and, especially, a very expensive horse of Harrison’s, have run off and joined. Riders gather from all around and Harrison leads them off on a chase lasting hours. When the herd plunges off a ridge down an amazingly steep slope to the lands below, Harrison calls off the chase. But Jim Craig, on his rugged mountain pony, rides right off the edge of the ridge, makes an astounding descent, and continues the chase alone. It’s one of the great horse riding scenes in movies.

Way out in post-World War II 1949 a controversy arose about whether that famous ride really happened. It was generally considered great fiction. But was there really a Man from Snowy River? In the Upper Murray River “cattle country around Kosciusko they will tell you that the hero was no myth but really lived. You may not tell the cattlemen out there that Banjo’s Man was a synthesis, a combination of all the characteristics and qualities that Banjo had discovered in the mountain riders. ‘No doubt about it,’ they tell you, ‘John Riley was Banjo’s Man. We can prove it.’”

The story offered is that Banjo Patterson and two other riders once stayed the night in John Riley’s hut. “There they heard the story of Riley’s memorable ride, as a young man, down the slopes and through evil country in chase of horses.” Paterson’s companion, John Pierce, in later years recounted that, “John Riley pulled his hat down over his ears, and with a wild yell charged down after the outlaws while his friends held their breath. It is difficult to imagine what Riley rode like down that slope. Riley vanished from sight in a flurry of heels and a shower of dirt through a thousand hazards where the wild hop scrub grew thickly and the hidden ground was full of wombat holes, the lash of branches, the menace of boulders, the clawing brush must have made it a nightmare. Any slip was death, and hardly a man among the hunters thought to find him alive.” Pierce asserted that, “It was this ride that gave birth to Banjo’s poem.”

Another local stockman, one H. Barlee, who as a younger man had been employed by Pierce, said that The Man From Snowy River “appeared soon after Banjo had heard the story of Riley’s ride, and if he did not use John as his hero, at least he used his achievement for his text.”

As John Riley or a composite, Jim Craig’s ride in the movie is spectacular. Actor Tom Burlinson had ridden horses a bit before, but got excellent training and did most of his riding in the movie, including the descent (though not the jump off of the top). It is some riding; would have been even for an experienced horseman. Burlinson learned fast and had guts!

As the others turn back, Jim Craig proceeded after the brumbies alone. Sure enough, as the riders reach home, what do they see but Craig, long whip snapping, driving the brumby herd into the station and the corrals! Craig ties his own recaptured horse to his wagon, tells Harrison that he’ll be back for 12 brood mares that are in the brumby herd, and that he’ll be back for Jessica, too! Heading back up to his home in the hills, superb mountain horseman Jim Craig had proven himself! 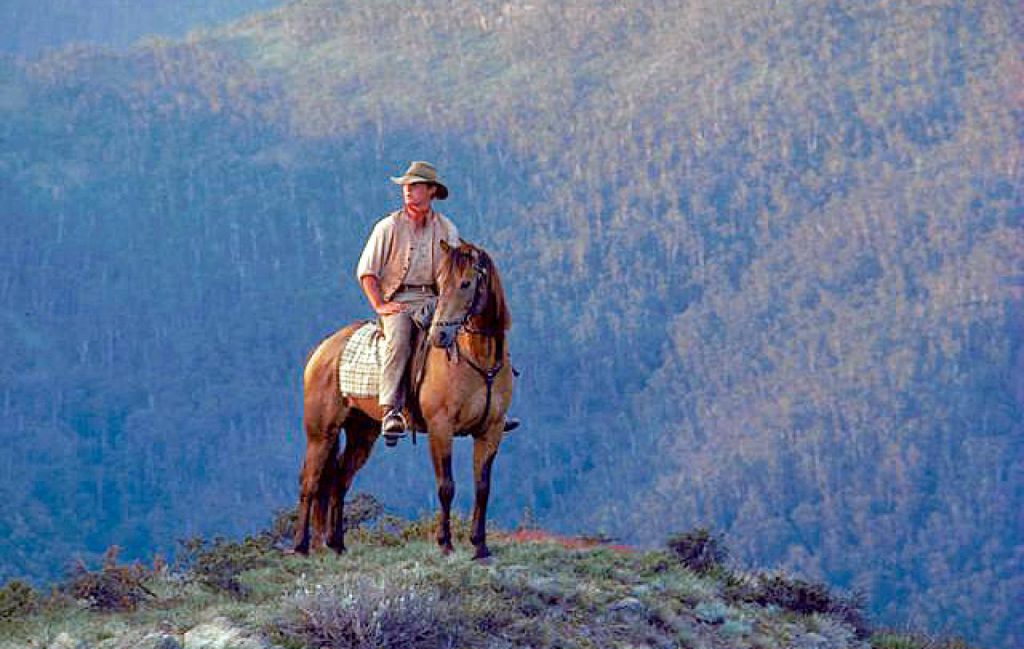