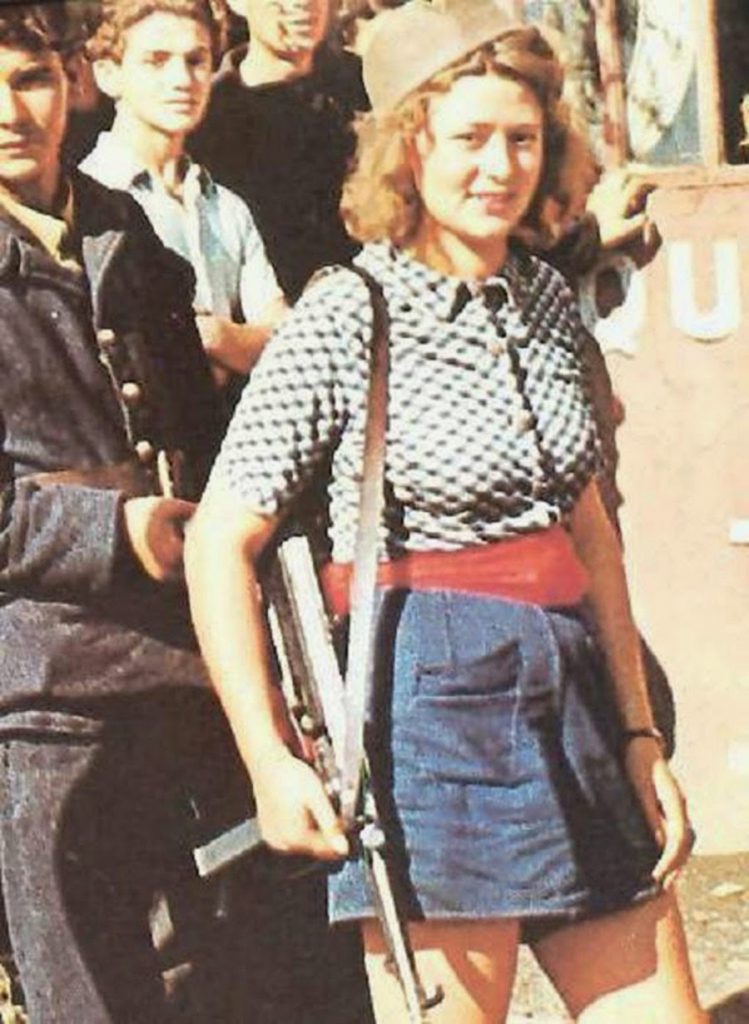 One morning in Occupied France in 1944 German soldiers emerged from a billet to find all the tires of their bicycles and motorbikes slashed. And one bicycle was missing – stolen. Unbeknownst to them, the culprit was a young French woman, Simone Segouin. She then got the bike repainted to use as a messenger between Resistance factions.

Simone Segouin, just 18 years old, had met Resistance commander Roland Boursier in the countryside outside her village of Thivars near Chartres. They’d fallen in love, and it was Boursier who asked her to become a messenger for him. Eventually, he asked Segouin to join up. Motivated by the example of her farmer father — a medal-winning French soldier in World War I — her French Nationalist beliefs, and love, Segouin adopted the nom de guerre Nicole Minet, received fraudulent identity papers, and joined the FTP, the Francs-Tireurs et Partisans — Free-Shooters and Partisans. 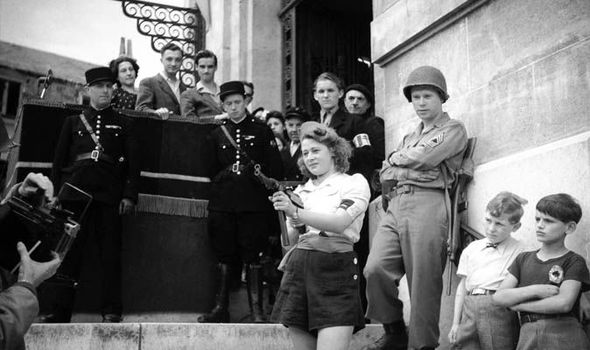 Partisans trained Segouin to use weapons. She gained proficiency with a Schmeisser MP-40 sub-machine gun, taken from a German soldier. Along with her messenger duties, Segouin started scouting out potential sabotage targets for the FPT. She began going on missions blowing up bridges, attacking German convoys and trains, and even attacking detachments of German soldiers.

As Segouin described it, “One of the best days was when we arrested 25 German soldiers…. It felt good, as we knew we would soon have our country back from occupation.”

Asked once if she’d ever killed, Segouin referred to a July 14, 1944 ambush she and two comrades set for a couple of German bike messengers. As the soldiers rode by, all three Partisans opened fire, killing them instantly. Segouin said she couldn’t say whose bullets killed the Germans; but expressed regret, saying that it was a terrible way for them to die.

Seguin participated in the liberation of Chartres in August 1944. She and her comrades then linked up with the French 2nd Armored Division on its drive to liberate Paris. She was fully engaged as the Germans fought a rearguard action.

“I was not the only woman who joined the Resistance. I am proud of what we did as a team. But the proudest moment was probably going to Paris with General Charles de Gaulle. It was a wonderful feeling entering the city but my excitement was limited because it felt very dangerous.”

It was in the liberation of Chartres that Seguin’s fame began. First, journalists noticed her “eating a baguette smeared with jam, her machine gun by her side,” wearing shorts, a jaunty military hat, and an FPT armband. Then, after the city was liberated, she appeared on the steps of a building in front of comrades, police, an American soldier, and two young teenaged boys, posing with her machine gun in a fighting position. American photographer Robert Capa snapped some photos of her, which ran in Life magazine. George Stevens also got some film footage of her walking with a bit of a smile on her face, wearing her same outfit. Then in the thick of the fighting in Paris, a photographer took a photo of Segouin dressed in her signature attire between two comrades taking cover along the side of a building.

It is a remarkable photo.

Segouin became famous as a symbol of women in the Resistance.

After the war Segouin was promoted to Lieutenant and honored by being awarded the Croix de Guerre. She became a pediatric nurse back in Chartres, “where her wartime exploits made her hugely popular.”

And her romance with Roland Boursier was long lasting. While they never married, they had six children, all of whom were given Segouin’s maiden last name.

About four years ago the British military charity Soldering On presented her with an international award.

“The award is in recognition of your exemplary courage and devotion to the vital work carried out by the French Resistance during the Second World War. They were an inspiration for your fellow countrymen and women and to those of us in Britain, more than 70 years ago and they continue to be to this day. We in Britain are still keenly aware of the vital role played by yourself and your comrades in weakening German morale…, often at great personal sacrifice. The French Resistance and your part in it proved critical in supporting our armed forces, especially those stranded behind enemy lines.”

Simone Segouin is still with us, described now as a frail 94-year-old living in a nursing home in Chartres.