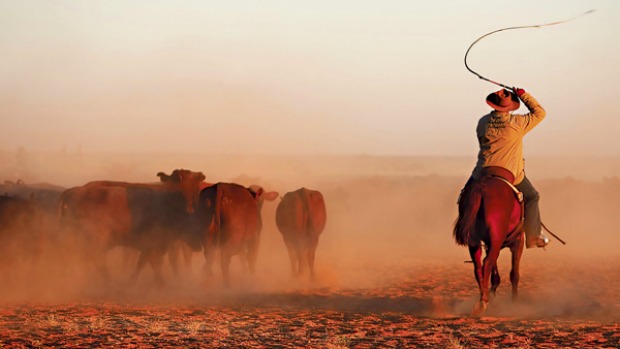 Many moons ago, I sat mesmerized in the performing arts center in Elko, Nevada, as a woman recited Harry Harbord Morant’s poem, Who’s Riding Old Harlequin Now? The setting was the National Cowboy Poetry Gathering, and the Breaker’s work falls seamlessly into that tradition. The recitation was excellent, and it gave me chills to hear it in a packed and utterly silent hall, and to think that it outlasted the echo of the shots that hurled him into eternity in Pretoria, South Africa, on February 27 1902.

My prep for the recent screening/discussion of Breaker Morant led me back to his poetry, of which Harlequin is my favorite.

They are mustering cattle on Brigalow Vale
Where the stock-horses whinny and stamp,
And where long Andy Ferguson, you may go bail,
Is yet boss on a cutting-out camp.
Half the duffers I met would not know a fat steer
From a blessed old Alderney cow.
Whilst they’re mustering there I am wondering here –
Who is riding brown Harlequin now? 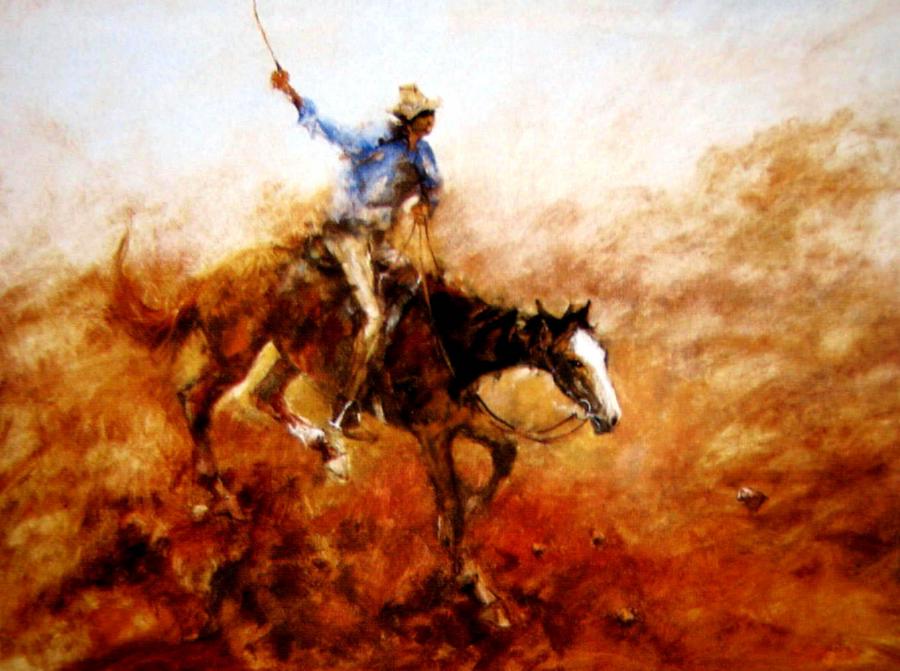 Are the pikers as wild and the scrubs just as dense
In the Brigalow country as when
There was never a homestead and never a fence
Between Brigalow Vale and The Glen?
Do they yard the big micks ’neath the light of the moon?
Do the yard-wings re-echo the row
Of stockwhips and hoof-beats? And what sort of coon
Is there riding old Harlequin now?

There was buckjumping blood in the brown gelding’s veins,
But, lean-headed, with iron-like pins,
Of Pyrrhus and Panic he’d plentiful strains,
All their virtues, and some of their sins.
’Twas the pity, some said, that so shapely a colt
Fate should with such temper endow;
He would kick and would strike, he would buck and would bolt –
Ah! who’s riding brown Harlequin now? 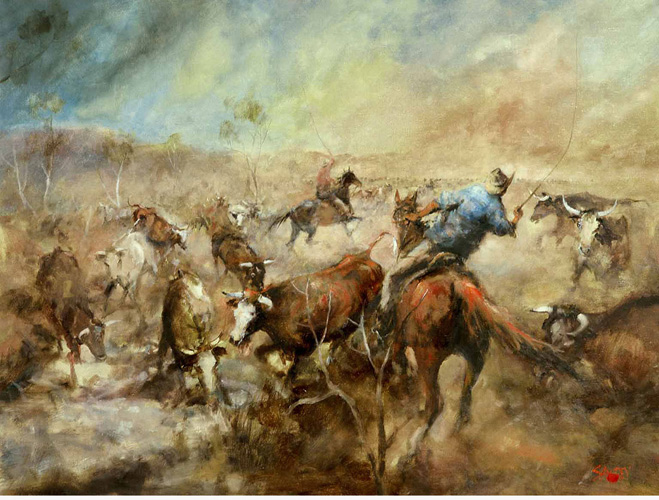 A demon to handle! a devil to ride!
Small wonder the surcingle burst;
You’d have thought that he’d buck himself out of his hide
On the morning we saddled him first.
I can mind how he cow-kicked the spur on my boot,
And though that’s long ago, still I vow
If they’re wheeling a piker no new-chum galoot
Is a-riding old Harlequin now!

I remember the boss – how he chuckled and laughed
When they yarded the brown colt for me:
“He’ll be steady enough when we finish the graft
And have cleaned up the scrubs of Glen Leigh!”
I am wondering today if the brown horse yet live,
For the fellow who broke him, I trow,
A long lease of soul-ease would willingly give
To be riding brown Harlequin now!

“Do you think you can hold him?” old Ferguson said –
He was mounted on Homet, the grey;
I think Harlequin heard him – he shook his lean head,
And he needed no holding that day.
Not a prick from a spur, nor a sting from a whip
As he raced among deadwood and bough
While I sat fairly quiet and just let him rip –
But who’s riding old Harlequin now? 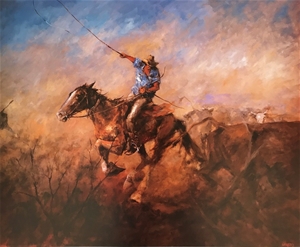 I could hear ’em a-crashing the gidgee in front
As the Bryan colt streaked to the lead
Whilst the boss and the niggers were out of the hunt.
For their horses lacked Harlequin’s speed;
The pikers were yarded and skies growing dim
When old Fergie was fain to allow:
“The colt’s track through the scrub was a knocker” to him –
But who’s riding brown Harlequin now?

From starlight to starlight – all day in between
The foam-flakes might fly from his bit,
But whatever the pace of the day’s work had been,
The brown gelding was eager and fit.
On the packhorse’s back they are fixing a load
Where the path climbs the hill’s gloomy brow;
They are mustering bullocks to send on the road,
But – who’s riding old Harlequin now? 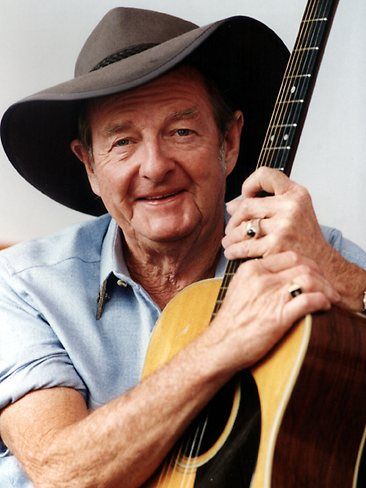