Rick Schwertfeger stole Raylan Givens’ hat. He swears that it was was justified.

The Pacific Northwest HQ of Frontier Partisans pulled up stakes and headed south for a few days last week to Austin, Texas. Music, Mexican food, barbecue, steak…. Oh, yes, and business. The trip was newspaper-related, but Marilyn stowed away and made the trek with me — and we took the opportunity for a council with the Southern Command under Captain Rick Schwertfeger. As most of you know, Captain Schwertfeger is a consistent contributor to Frontier Partisans, with several pieces on the civil war within the Revolutionary War and a recent piece on Hubbell’s Trading Post.

Rick and his wife Marcia Desy offered guide services to our choice of Austin music on Friday night, and Marilyn and I chose to partake of a classic Texas Dancehall experience at the Broken Spoke. Blame Slaid Cleaves, who has mentioned the joint twice in song lyrics… 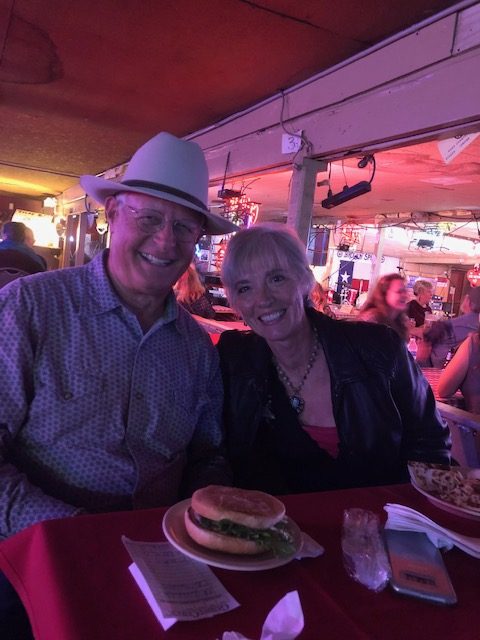 The legendary place has seen everyone from Bob Wills to Jerry Jeff Walker to Willie Nelson and George Strait got his start there. The 80-something owner James White is there each night in his Western finery to mingle with his guests, while his daughter teaches them how to dance to traditional country music. Marilyn and I are not ace dancers by any measure, but we’ll get out there, especially when the band plays Dwight Yoakam’s Fast As You. We had a delightful time, even though between bootheels and hat crown, I could barely stand up tall in the place. 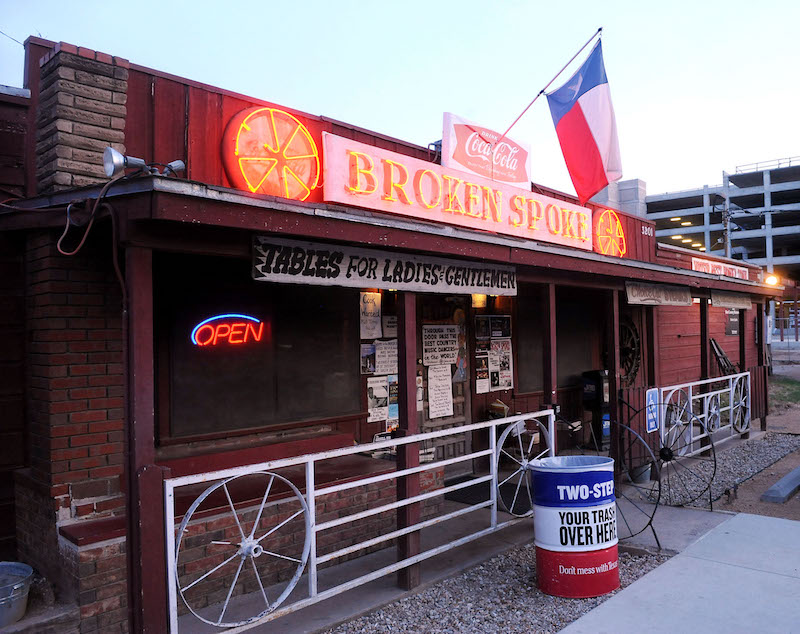 The place is “vintage” in every respect — as in virtually nothing has changed since the joint opened in 1964, including the bathroom fixtures. There’s a reason for that, which may or may not be a Texas Tall Tale:

James White likes to tell a story about another Texas legend, Davy Crockett: “Yeah, old Davy came through here on his way to fight at the Alamo and he liked what he saw. He said, ‘James, don’t change a thing ’til I get back.’ Well poor ole Davy never made it back so we ain’t changing nothin!” 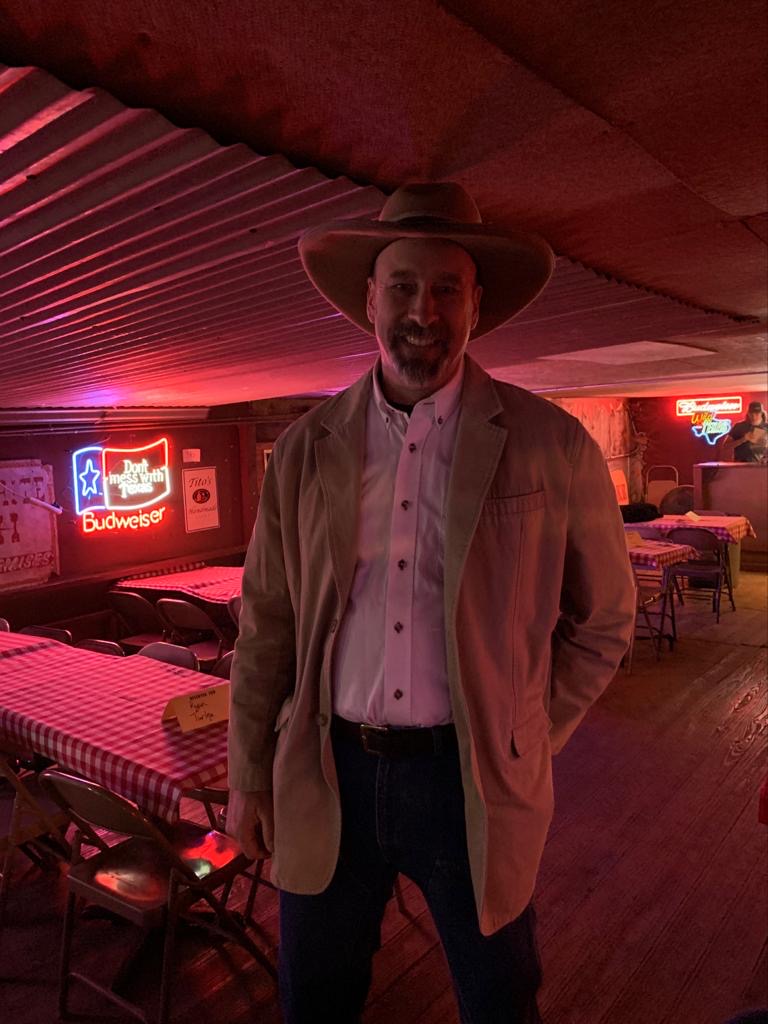 As much as I enjoy Austin, I hankered to get out into some terrain — so on Saturday the Schwertfegers led us out to Pedernales State Park, about 40 miles or so to the West of Austin. Now we’re talkin’. We drove into Hays County, Texas, named after the legendary Texas Ranger Jack Hays. He rode here, as did his Comanche adversaries. The Frontier Partisan Blood began to sing. I also thought of Robert E. Howard as he took a fateful road trip that led him through nearby Fredericksburg:

In February 1932, Howard took his trip down to the Rio Grande Valley, passing through Fredericksburg. While he was in Mission, he wrote the poem “Cimmeria”(at least, so he told Emil Petaja when he sent him a copy of the poem: “Written in Mission, Texas, February 1932; suggested by the memory of the hill-country above Fredericksburg seen in a mist of winter rain.”). At some time during his stay in the Valley, Conan came to him. 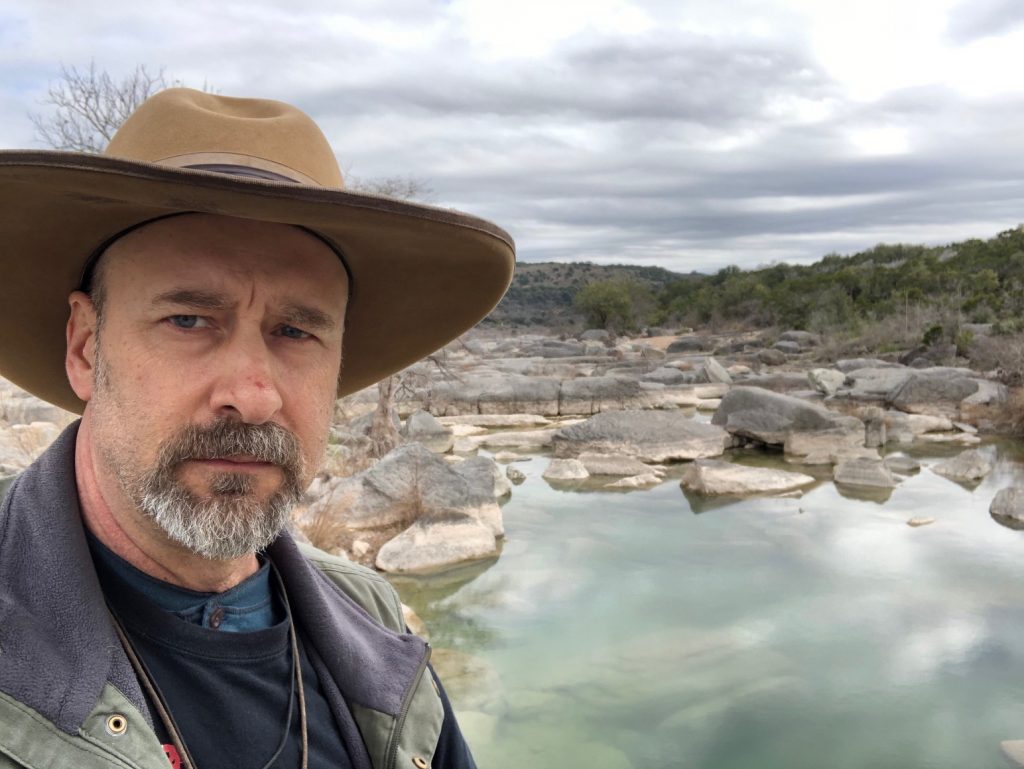 Pedernales Falls is where the Pedernales River steps down along its limestone-bedded course. It can be mighty flashy, apparently, and there are plenty of warnings about getting the hell out of the riverbed if the water starts to rise or get muddy.

As it was on Saturday, February 8, 2020, it was just a boulder-hopper’s playground, and I enjoyed it to the fullest.

It was an absolute delight spending time with Rick and Marcia, talking Story and soaking up every bit of Texas experience we could get. Looking forward to returning the hospitality up here in the Pacific Northwest Command. 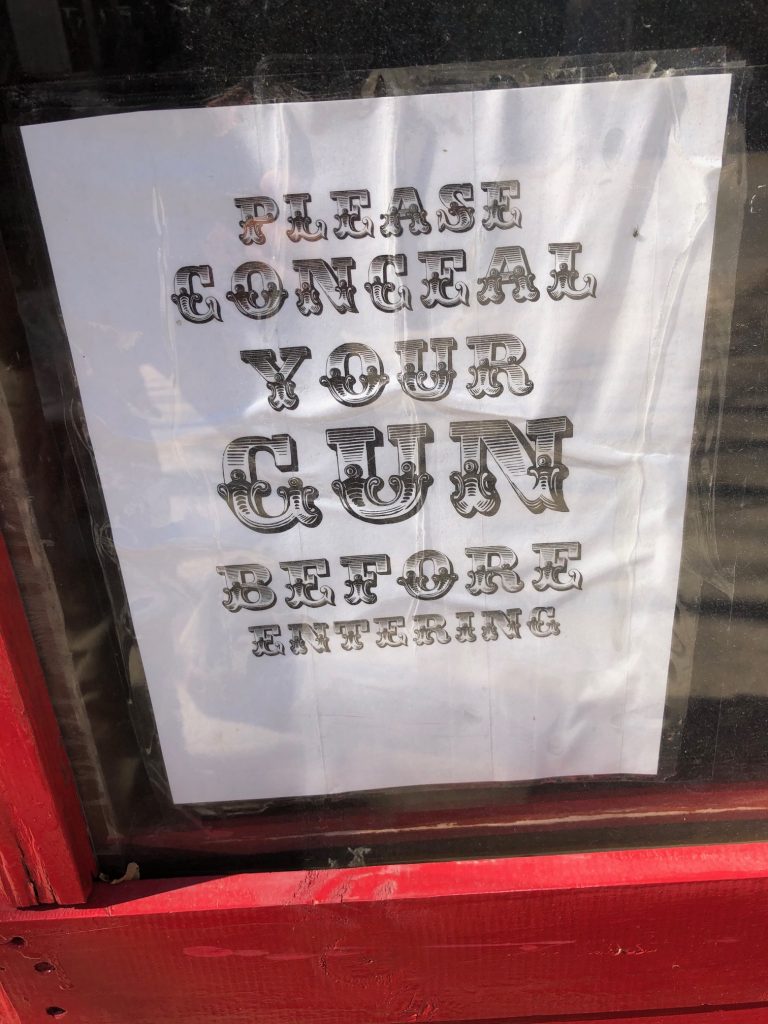 Classic sign on the door at Iron Works Barbecue in Austin.