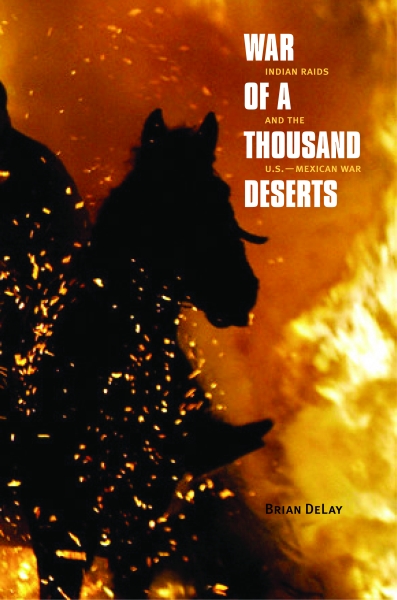 I’ve been meaning to crack this book for a long, long time. Damn! What I had been missing.

War of a Thousand Deserts: Indian Raids and the U.S.-Mexican War, by Brian DeLay, is a masterpiece. Overused term, I know, but  I really mean it. A true magnum opus. Scholarly, well-written and, most importantly, honest and real. I’ve grown so used to throwing tomes filled with absolute academic claptrap against the walls that I have become downright prejudiced against any product that comes out of the world of the university. But there it is: DeLay is an associate professor of history — at UC Berkeley, no less. And his book kicks ass.

The thesis is straightforward: Comanche raiding into northern Mexico in the 1830s and ’40s fundamentally weakened the republic, compromising its ability to fend off the Americans during the U.S. Mexican War of 1846-48. The unintended consequence of this for the Comanche was that their most dangerous enemy was thereby empowered, so the Comanche’s own actions sealed their doom.

How all this came to pass is stay-up-way-too-late fascinating.

I knew a fair bit about the general outlines of Comanche and Apache raiding and warfare in Mexico, but DeLay gives the story detailed economic and diplomatic context. There were reasons why a long period of general peace between the Spanish, then the Mexicans, fell apart and raiding surged to an unprecedented scale in distances covered and in sheer savage carnage.

On the diplomatic front, the Comanche were besieged by intertribal enemies in the early 19th Century, making it necessary to observe more-or-less peaceful relations with Mexico. And they dared not leave their camps  for long raiding expeditions, for fear that they’d be ravaged in turn by Osage or Cheyenne and Arapaho raiders. The conclusion of several peace agreements with other tribes, including the Great Peace of 1840, freed the Comanche up to conduct massive raids, hundreds of warriors strong, deep into the heart of Mexico

There was strong economic motivation for raiding. Mexico was rich in horses and mules, which were in high demand across the plains. The Comanche stole thousands of head of horses and drove them north, keeping some and trading others to the tribes farther north.

Delaware and Shawnee traders served as intermediaries who conducted trade in la Comancheria for horses and mules that ended up in the possession of Americans. DeLay makes the case that raiding came to be on a par with bison hunting as a primary economic driver for the Comanche.

As always comes clear when you study the real frontier, the scope of trade is astounding. Far from being in a state of nature, the Comanche and other Indians were integrated into extensive and sophisticated trade networks that included desirable manufactured goods, from cotton cloth to brass buckets. And, of course, firearms. The frontier was a porous and permeable border; the interplay of peoples and cultures — Comanche, Apache, “civilized” Indians, Mexicans, Americans — was significant.

DeLay studied Mexican sources to depict and understand the nature and impact of Comanche raids. It is interesting to note that, as they penetrated as far south as Zacatecas, the Comanche and their close Kiowa allies used Mexican guides. Some, obviously, under duress, but all too often men riding with the Comanche as renegades. Some towns served up their neighbors in exchange for a pass. Farther west, in Chihuahua and Sonora, the Apache were able to play state governments off against each other, making peace with one to create a sanctuary to raid the other.

This kind of disunity and institutional weakness made northern Mexico easy prey when the vigorous, aggressive United States decided to force territorial concessions by force of arms. 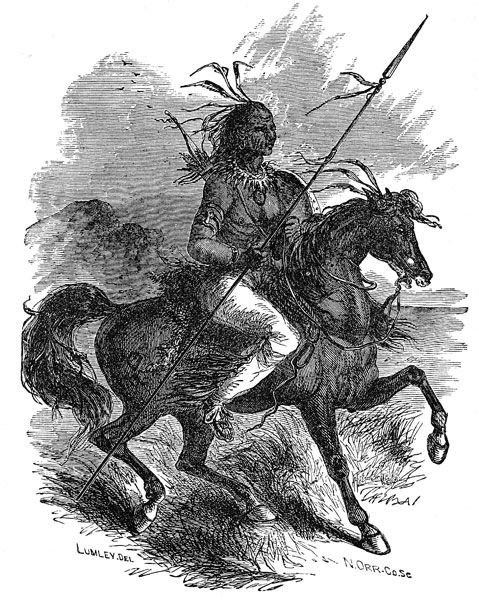 DeLay’s Comanche are no historical victims. They are one of the great raiding cultures of history, who knew well what it was to crush their enemies, see them driven before them and hear the lamentations of their women.

DeLay spares no sensibilities in depicting the nature of the mass Comanche raids. They were horrific. The Comanche went out of their way to be cruel and destructive and the violence they perpetrated was against people who were no threat to them or their homelands.

They raped women and took captives for slaves. Livestock that was of no utility to them — goats, pigs, cattle — they slaughtered and left strewn in  heaps. If they lost men, that was regarded as an affront demanding vengeance, and revenge need not be meted out on the “guilty.” They laid waste to ranches and whole villages and towns. The Texas frontier, raw and bleeding as it was, saw nothing to compare with the horrors of the “thousand deserts” the raiders left in their wake in Mexico.

It is refreshing to see an academic face up so squarely to the realities of the 19th Century borderlands, without grinding some contemporary cultural-political ax or glossing over the real savagery of native peoples who warred for the love of war. In DeLay’s interpretation, the Comanche were powerful non-state actors in a major geopolitical drama, acting as their cultural, economic and diplomatic imperatives bade them do. He doesn’t patronize them with victimology and as a result the Comanche are seen as what they were: One of the great warrior peoples of history, terrible and magnificent. And, one must see, “a legion of horribles.”*

DeLay’s attitude toward these raiders is right in line with Fehrenbach and aligns perfectly with where Frontier Partisans is coming from.

“…Comanche and Kiowa Men were not fighting to change Mexican behavior. They were not fighting for their land or the safety of their families or in defense of their culture. They were not avenging Mexican attacks on their villages or resisting Mexican economic and territorial colonialism. At bottom they were fighting to win honor, avenge fallen comrades, and grow rich. But to say that Comanches and Kiowas waged an extraordinarily cruel war for revenge, personal prestige, and material gain, and that they justified it with arguments that might sound unpersuasive today is not to revive the discredited stereotype of the subhuman ‘savage.’ Just the opposite: It is to say that these people were fully human. Comanches were obviously not the only group in history, or even in nineteenth-century North America, to butcher, enslave and impoverish people who had done them little harm. And, as any atlas will attest, Comanches were not the only people to exaggerate their grievances with Mexicans in order to take from them what they wanted in the 1830s and 1840s.”

This is the way it should be done, folks: Strong research, clear-eyed interpretation, fine storytelling. Shoulda bit earlier, but I’m glad to have it now — one of the very best books in my Frontier Partisans library.

“A legion of horribles, hundreds in number, half naked or clad in costumes attic or biblical or wardrobed out of a fevered dream with the skins of animals and silk finery and pieces of uniform still tracked with the blood of prior owners, coats of slain dragoons, frogged and braided cavalry jackets, one in a stovepipe hat and one with an umbrella and one in white stockings and a bloodstained wedding veil and some in headgear or cranefeathers or rawhide helmets that bore the horns of bull or buffalo and one in a pigeontailed coat worn backwards and otherwise naked and one in the armor of a Spanish conquistador, the breastplate and pauldrons deeply dented with old blows of mace or sabre done in another country by men whose very bones were dust and many with their braids spliced up with the hair of other beasts until they trailed upon the ground and their horses’ ears and tails worked with bits of brightly colored cloth and one whose horse’s whole head was painted crimson red and all the horsemen’s faces gaudy and grotesque with daubings like a company of mounted clowns, death hilarious, all howling in a barbarous tongue and riding down upon them like a horde from a hell more horrible yet than the brimstone land of Christian reckoning, screeching and yammering and clothed in smoke like those vaporous beings in regions beyond right knowing where the eye wanders and the lip jerks and drools.”

The “thousand deserts” is the land and era of “Blood Meridian,” and DeLay has conquered it. 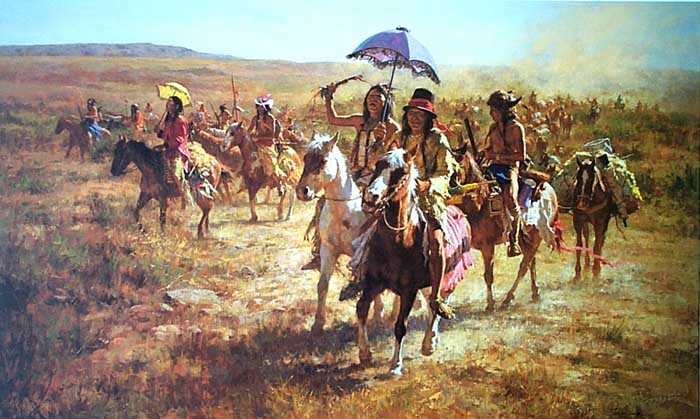