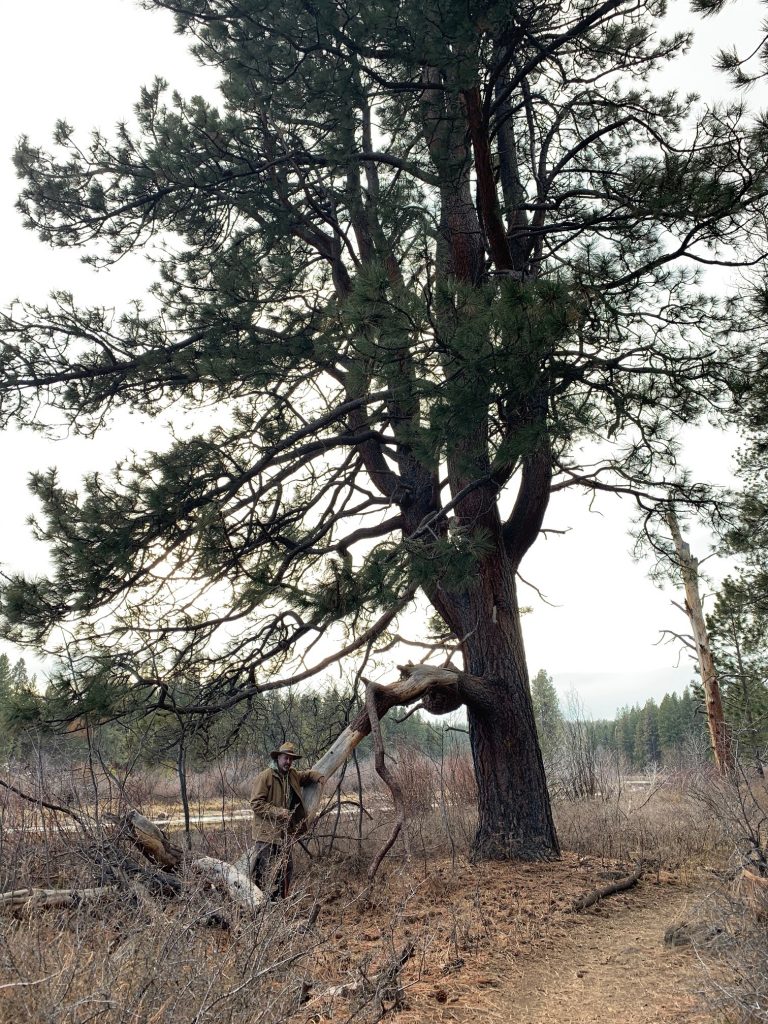 A remarkable old ponderosa pine by the Deschutes River. Rare to see a pondo with so many forks thriving. Proximity to water helps, no doubt.

I always enjoy checking the traps at this time of year, because they’re always full of prime peltries of promise for the new year. Like this here: 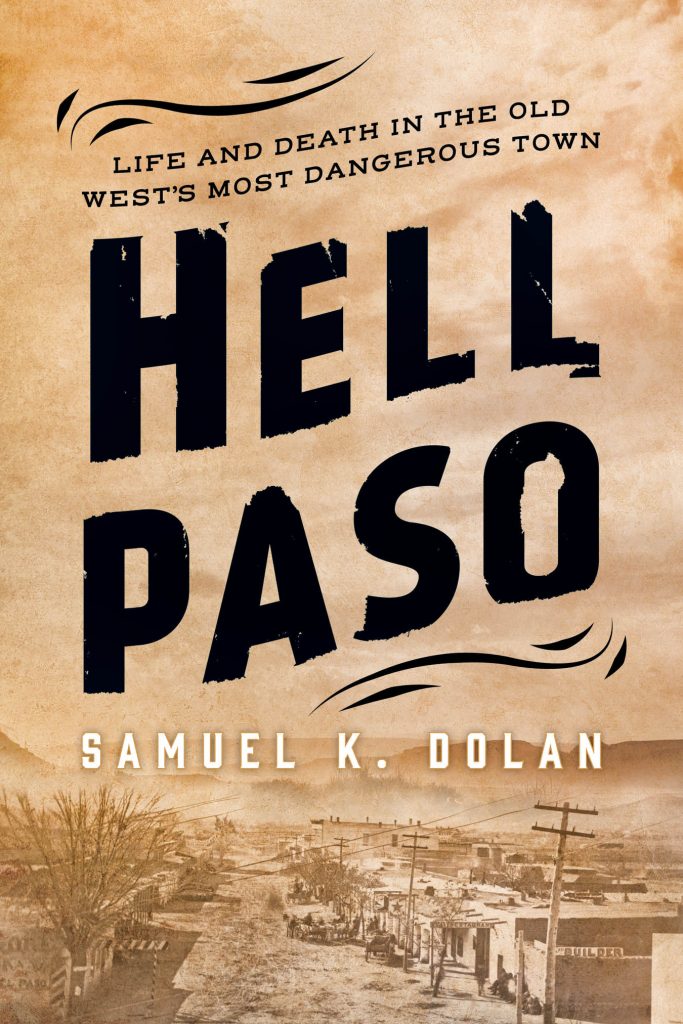 Born For The Saber is available in North America through iTunes and Amazon Prime, with English subtitles. This “education of a warrior” tale is a labor of love and a fine documentary tribute to one of the most magnificent of Frontier Partisan cultures. I enjoyed it a great deal. 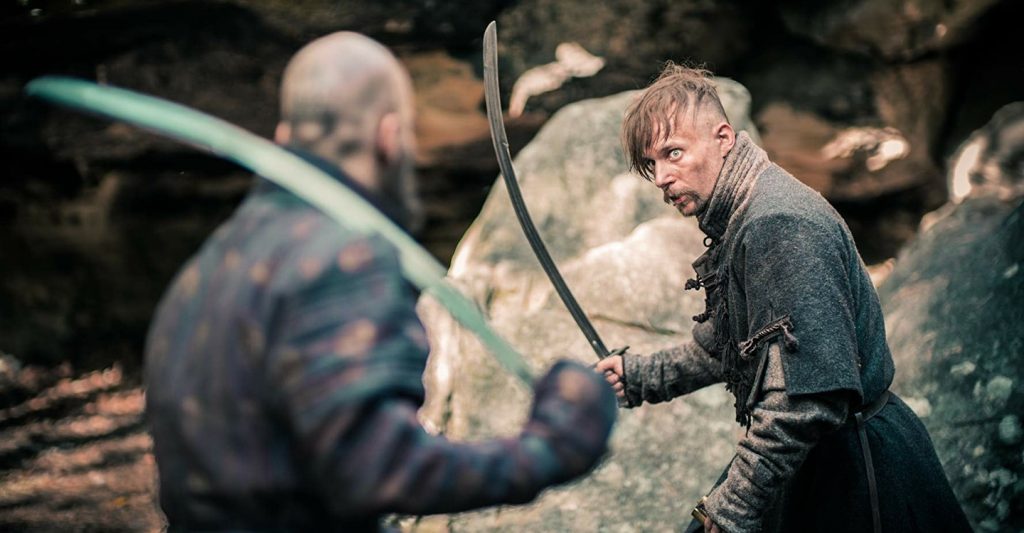 Thanks to the ever-reliable FP Scout Lane Batot for the word on Togo.

As Outside Magazine has it:

In the winter of 1925, a deadly illness struck the city of Nome, Alaska. The nearest stores of medicine were hundreds of miles away, across the state’s snowy interior. But you’ve heard this story. The 1995 Disney movie Balto immortalized it for a generation: the eponymousdog rallied the team that brought the lifesaving serum through the Alaskan wilds, heroically saving the city’s children. Since 1925, Balto has earned universal acclaim, legions of fans, and a commemorative bronze statue in New York City’s Central Park.

But Togo, a new movie that hits the Disney+ platform on December 20, corrects the historical record in favor of an underdog. As it turns out, Balto was just one of more than 100 pups who made that lifesaving dogsled relay to Nome possible. Balto did lead the canine team over the final 55-mile stretch of the journey (he was still leading the pack when it arrived in the city itself). But a different dog, Togo, ran more than double the distance of any other dog on the team and led it through some of the riskiest spots.

Togo, which stars Willem Dafoe, promises to chart the life of the historically overlooked pup who made the crucial delivery of medicine possible.

Our  14-year-old dog Conan ran out of trail last month, and I don’t know that either I or Marilyn can make it through a hero dog movie intact right now. Guess we’ll just have to gut it out…

Leonhard Seppala was a helluva man — one of Alaska’s great mushers and a leader in developing the Siberian Husky breed. 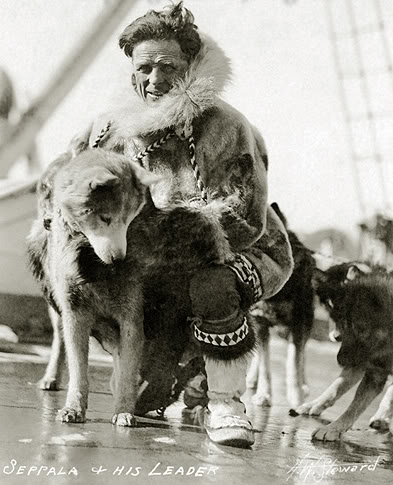 Alaska.org gives a brief recounting of his story:

Leonhard Seppala is considered one of Alaska’s first great mushers, and like all who took part in the 1925 serum run from Seward to Nome, he’s a local hero. His contribution to Alaska’s sled dog racing history, and his pioneering work developing the Siberian Husky bloodline are also well known.

Seppala didn’t start out working with dogs, though. He was recruited to Alaska from Norway by fellow Norwegian Jafet Lindeberg, who had struck it rich in Nome. Lindeberg convinced Seppala to come work for his Pioneer Mining Company. The work was difficult for Seppala, and he regretted his decision to leave home, until he became a sled dog driver, mushing supplies up to 100 miles each day. When Lindeberg asked him to train a sled dog team for an expedition Roald Amundsen was planning, he found his calling. The expedition was ultimately cancelled and Seppala got to keep the dogs.

Later, he began racing in the All Alaska Sweepstakes, winning a spot in the annals of sled dog racing history for three wins. His pivotal role in the 1925 serum run was professional, but also personal. His eight-year-old daughter Sigrid was in Nome, in danger of contracting diphtheria herself. Seppala and his team mushed five times farther than any other team during that effort. Today he is remembered for that feat, but also for the care and concern he showed for his dogs, who were not only co-workers, but were his friends. The prestigious Alaska Airlines Leonhard Seppala Humanitarian Award is given annually to the Iditarod musher who illustrates outstanding dog care throughout the race.

Smithsonian Channel will premier a new doco on The Battle of the Little Bighorn on January 13. 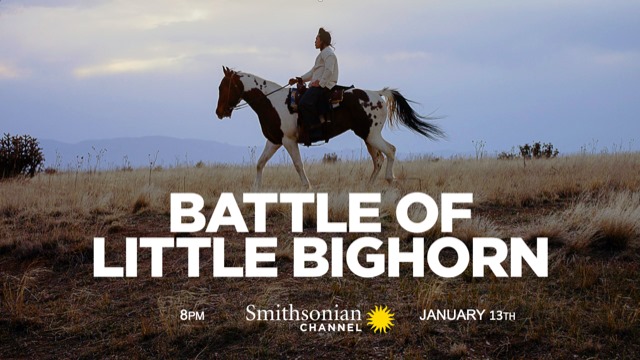 The Biscuit Factory-produced Battle of Little Big Horn traces the events leading up to Bighorn — broken treaties, stolen lands and the threat of government initiatives targeting the assimilation of the Lakota Sioux and other Native American tribes.

Battle of Big Little Horn uncovers how tabloid news coverage of the battle turned the U.S. Cavalry’s loss at Bighorn into an “unstoppable mythos” while fueling stereotyped depictions of Native Americans that persist today.

STARZ has released the opening credit sequence for Season 5 of Outlander. The Frasers are now settled in the colonial North Carolina backcountry… and conflict looms…

Ran across this feller out in the virtual woods. After bear, perhaps? Petchora is a region in Russia west of the northern Ural Mountains. Frontier country. 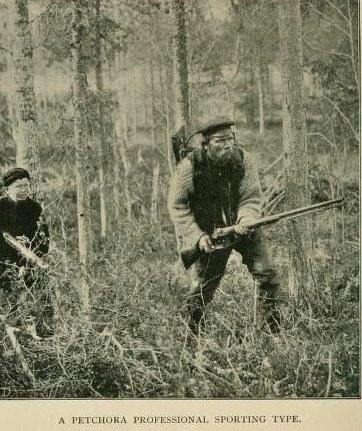 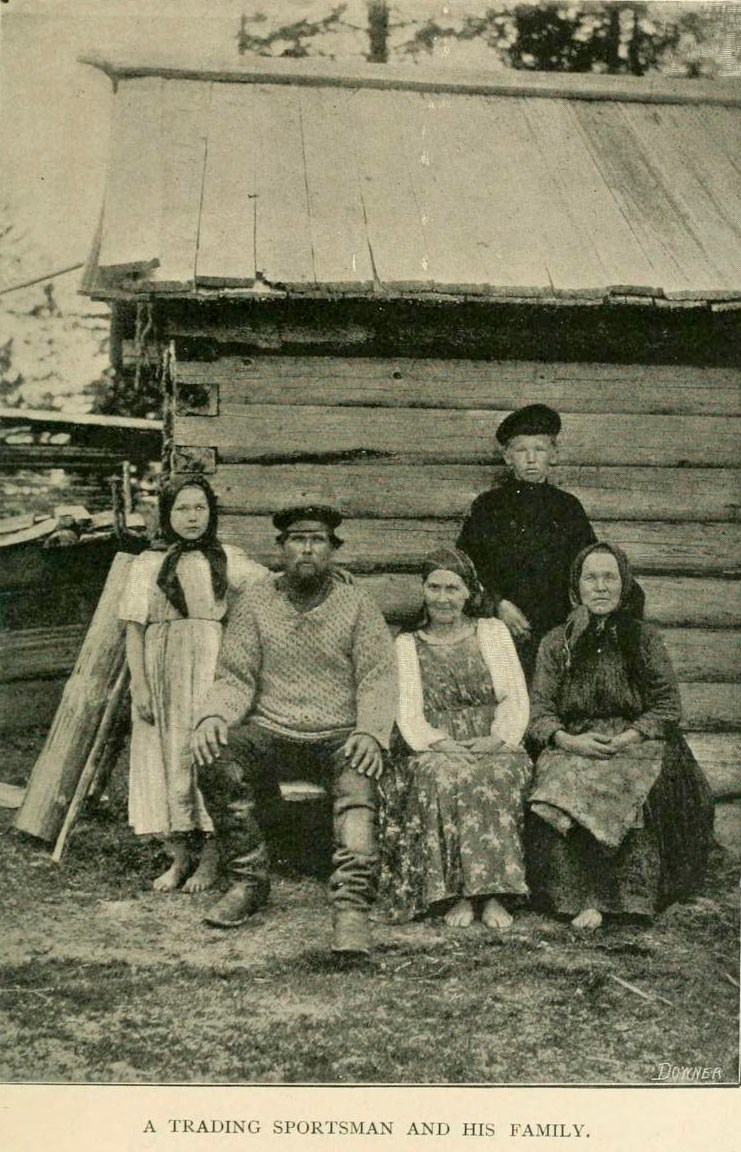 A new version of the classic ’70s song — a duet between songwriter Michael Martin Murphey and Steve Earle.

Watched a very well-put-together documentary titled 100 Days To Victory that details the Allies’ remarkably effective use of “all arms warfare” in the summer and fall of 1918 during  the last throes of the First World War. Canadian and Australian troops were the tip of the spear that thrust through the Hindenburg Line and forced Germany to seek an Armistice.

Smith earned his MC in France on November 9, 1918 — two days before the war ended.

The Allies had finally broken through the enemy defences along the Western Front and were advancing steadily eastward. Smith’s battalion was fighting its way toward Mons, Belgium. According to his citation, he “led his platoon forward with such rapidity that he surprised a party of [enemy] sappers preparing to blow up a road mine.” The party was stopped as the fuse was being ignited. As well, Smith personally captured an enemy machine-gun from its crew later that day.

Smith’s people migrated to Canada with the great Mohawk Frontier Partisan Joseph Brant after fighting for the British Crown in the American Revolution. As you all know, I get a powerful charge of frisson from such episodes of continuity and persistence…

Captain Rick Schwertfeger scouted up an interesting story about a young playwright taking on the fraught subject of missing indigenous women.

Isabella Madrigal has written, directed and starred in a play on missing and murdered Indigenous women, won scholarships and awards for her work, including a national Girl Scout award, and spoken at the United Nations. 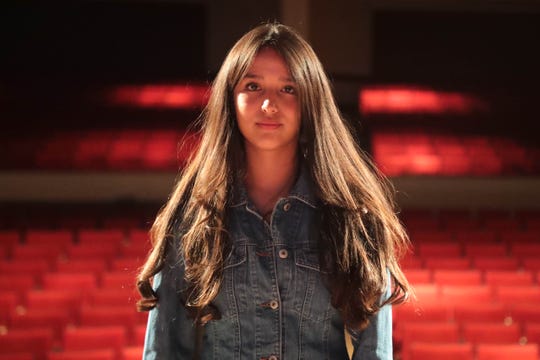 Madrigal, a Cahuilla Band of Indians tribal member, said her play, “Menil and Her Heart,” was inspired by ancient Cahuilla stories. It follows two sisters — played by Madrigal and her real life sister, Sophia Madrigal — one of whom goes missing. 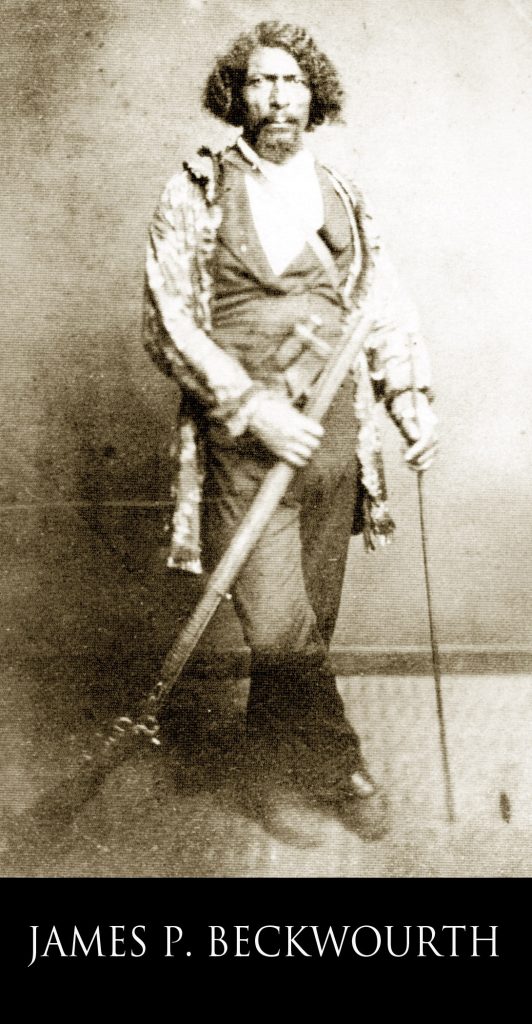 The story of Jim Beckwourth has always been one of my favorites from the era of the Rocky Mountain Fur Trade. Need to do an in-depth post on him this year. He’s the subject of two novels that I’ve long admired — Leigh Brackett’s Follow the Free Wind and Matt Braun’s Bloody Hand.

Born a slave, Beckwourth became a Mountain Man and a Crow War Chief. A 2015 article in Muzzleloader Magazine presents a strong case that a firearms collector has his rifle — a full-stock plains rifle converted from flintlock to percussion. It would seem that the rifle served Beckwourth through his long and adventurous career.

That rifle could tell some tales…

Note the classic shrunken leather and brass tacks repair to the wrist of the rifle. 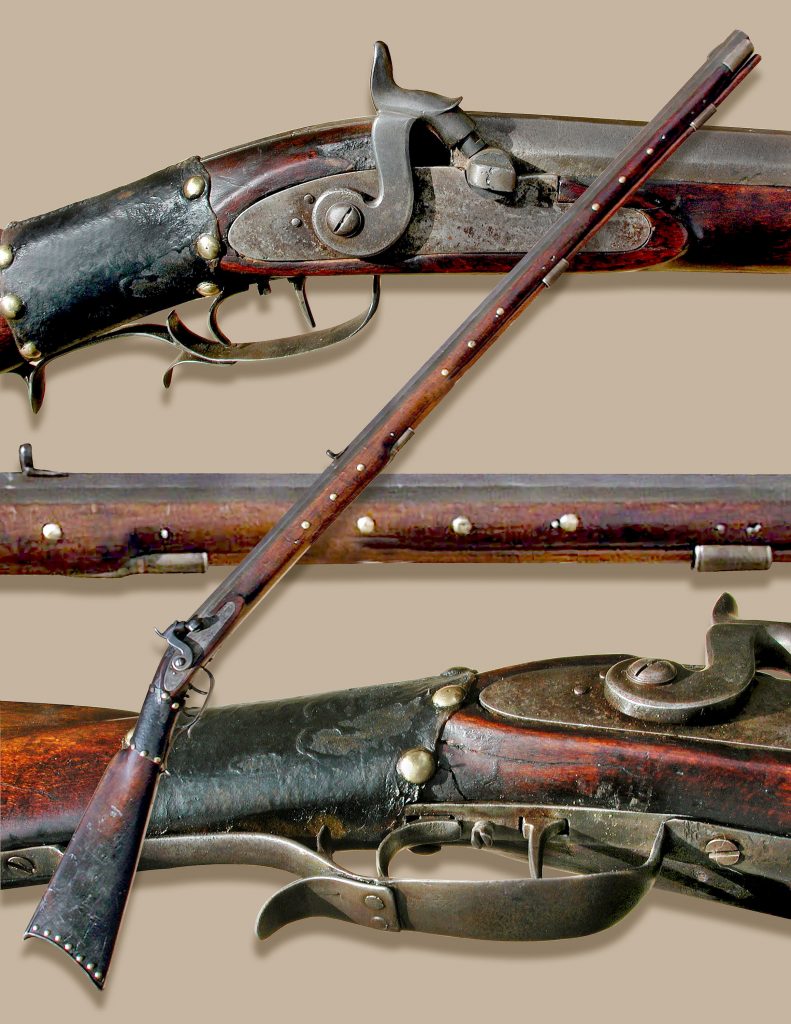