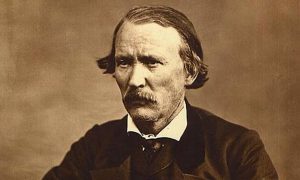 Editor’s note: This series on Canyon de Chelly and the Navajo Campaign of 1863-64 were inspired by my friend Jack McGowan’s trip through the American Southwest this fall. The first two parts of the series can be found here and here.

Kit Carson was a desperately sick man. By 1864, the robust mountain man of decades gone was beginning to fade. He carried a ticking timebomb in his chest, a pulmonary aneurysm that would, in four short years, take his life.

The rigors of a grinding, inglorious campaign against the Navajo were taking their toll; he was weary to the bone and he wanted to be done. Carson’s most fervent desire was to return home to Taos and the arms of his beautiful young wife Josefa Jamarillo and their children. 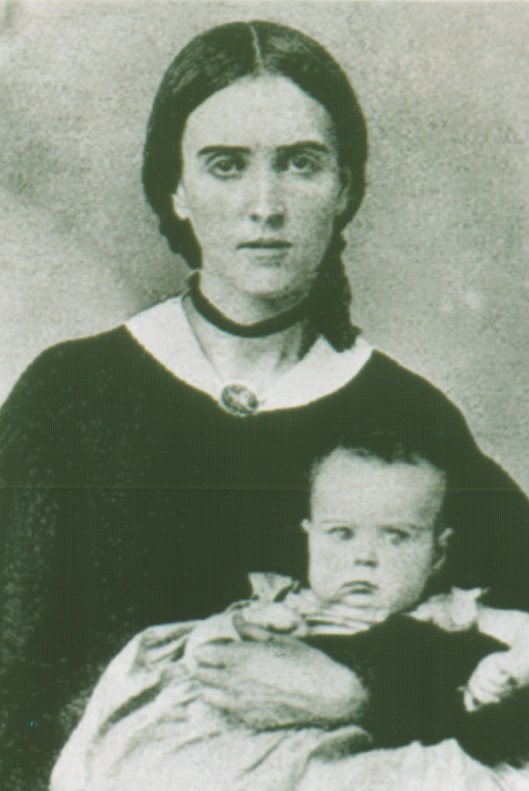 He sought several times to relinquish his command or to obtain a leave of absence, but General Carlton would not have it. Carson could earn his rest only by rounding up the Navajo.

If Carson was in a bad way, so were the Navajo. With their hogans burned, their crops and livestock destroyed, the Dine were feeling the pinch of starvation and the cold of winter. Some had surrendered. Carson was infuriated when a sadistic dolt of a post commander abused some of the first to come in. Not only was this inhumane, it was strategically stupid. Carson wanted the surrendered Navajo to communicate to their people that surrender was the best option; abuse merely stiffened resistance. 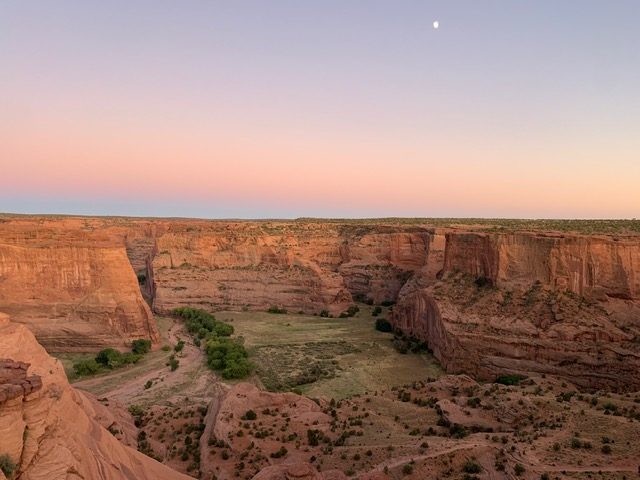 A substantial number of holdouts had retreated into the depths of the Canyon de Chelly complex. The three canyons that made up the complex were terra incognito to white men, and it made every mountain man instinct honed over years of traveling hostile country tingle. The canyon complex was a perfect trap, and Carson greatly feared that his command might be ambushed in its labyrinth and rubbed out. Ever cautious, he scouted the rim, then sent columns in from each end of the canyon. He, himself would not enter the canyon. As Hampton Sides notes:

“…even though his name would be forever associated with it, Carson would never set foot in Canyon de Chelly.”

One of the columns that entered the canyon complex from the east mistakenly moved through Canyon del Muerto. They rounded up some Navajo, skirmished with others. The column moved past Fortress Rock, unaware that 300 Navajos occupied the top of the tremendous sandstone pillar, supplied with food and snowmelt captured in cisterns. 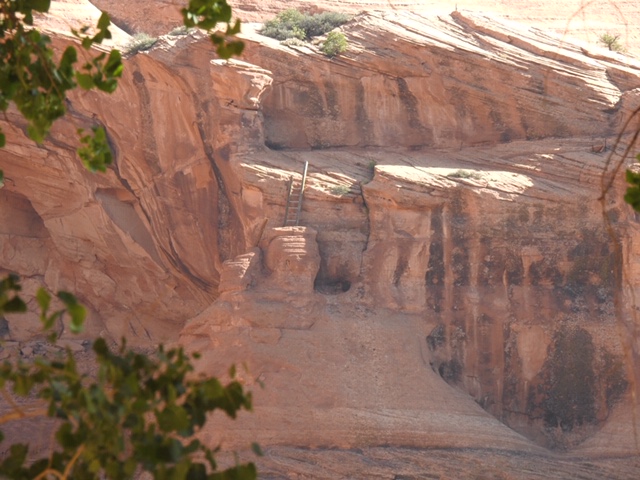 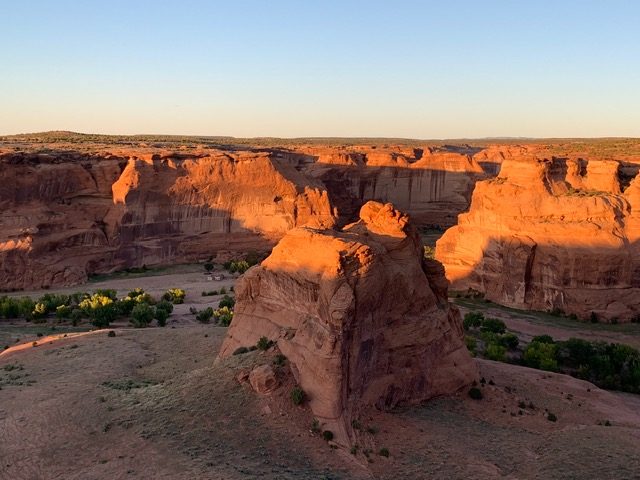 Later, Carson would send a force into the canyon to camp along Tsaile Creek and lay siege to Fortress Rock. In February 1864, the Navajo, perishing from thirst as the cisterns ran dry, pulled off an epic effort that Jack and Jan McGowan’s guide recounted to them. Hampton Sides describes it in Blood and Thunder:

“They formed a human chain along the precarious toehold path, all the way down to Tsaile Creek, where several American guards lay sleeping. A group of warriors crept out to a legend 20 feet over the stream and dangled gourds from yucca ropes, dipping  the containers into the cold running water. Working through the night, they filled gourd after gourd — right next to the sleeping Americans — and steadily passed the vessels from hand to hand back up the sheer rock face to the summit. By dawn, they had replenished their stores.”

The 300 withstood the siege and eventually slipped away. The were never rounded up in Carson’s sweep.

Despite the heroic efforts of some of the refugees in the canyon, the campaign had the effect Carson and Carlton sought. The Navajo began to surrender. Those who came in were relieved to discover that Carson did not intend a war of extermination. The Army colonel assured the cold, starving Dine:

“The government wants to promote your welfare. The point is not to destroy you, but to save you, if you want to be saved.”

He probably believed it.

Carson’s kindliness to the surrendered was mixed with a grim ruthlessness. The first major surrenders seem to have given him hope that he could swiftly wrap up the campaign, of which he was so heartily sick. He prepared to return to Fort Canby — but as he left, the hard man ordered an action that cut at the heart of the free Navajo, an act that Sides calls:

“…a parting gesture of pure aggression… Carson ordered his captains to chop down every peach tree in Canyon de Chelly.”

The order could not be carried out in the depths of winter, but the Americans returned in the summer and sawed down and burned thousands of the trees — the pride of the Dine.

It was an ugly act, one that renders Carson’s name forever accursed among the Navajo.

The worst by far was yet to come for the Dine. The trickle of surrender became a flood, and the Army marched them in their rags and hunger 400 miles to the east to Bosque Redondo on the Pecos River in far eastern New Mexico, where General Carleton planned to turn them into farmers.

It is not known how many Navajo died on what became infamous as The Long Walk. A great many fell to disease and exhaustion and to a spring blizzard. Marchers were preyed upon by Ute raiders, who took no pity on their hereditary enemy. There were incidents of rape and murder by the escort soldiers.

Bosque Redondo was hellish. The water was bad, the land completely incapable of supporting the numbers Canby was determined to house there. Comanche from the plains to the east saw easy pickings and raided the hapless Navajo at every opportunity. They had no means of self-defense and the Army could not protect them.

In the fall of 1864, Carson would lead an expedition out onto the plains to hit the Comanche and their Cheyenne and Kiowa allies, which would culminate in the inconclusive Battle of Adobe Walls.

For four years, the Navajo would eke out a miserable existence at Mosque Redondo. Canby, his great civilizing experiment a manifest failure would be fired. In the summer of 1868, General William Tecumseh Sherman himself — a man not noted for pity — authorized the return of the Dine to a reservation in their homeland.

The leader Barboncito signed a treaty with the U.S. government and took his people home. 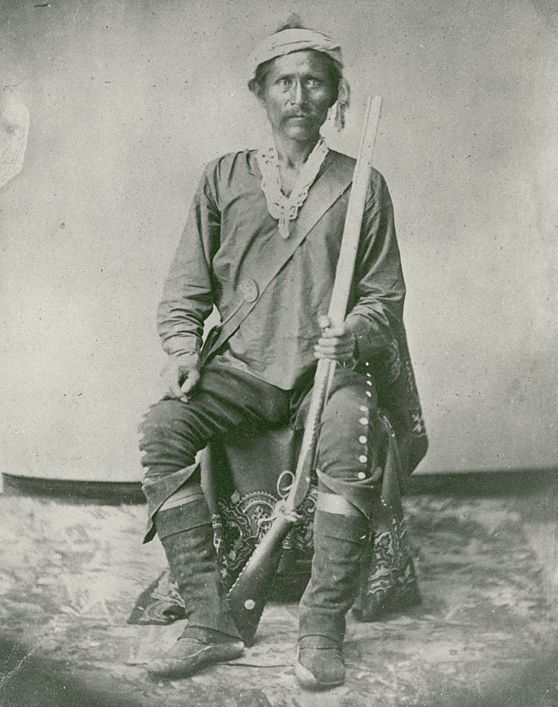 Kit Carson was dead, as were thousands of Navajo. A sad and terrible chapter in Frontier Partisan history had closed.