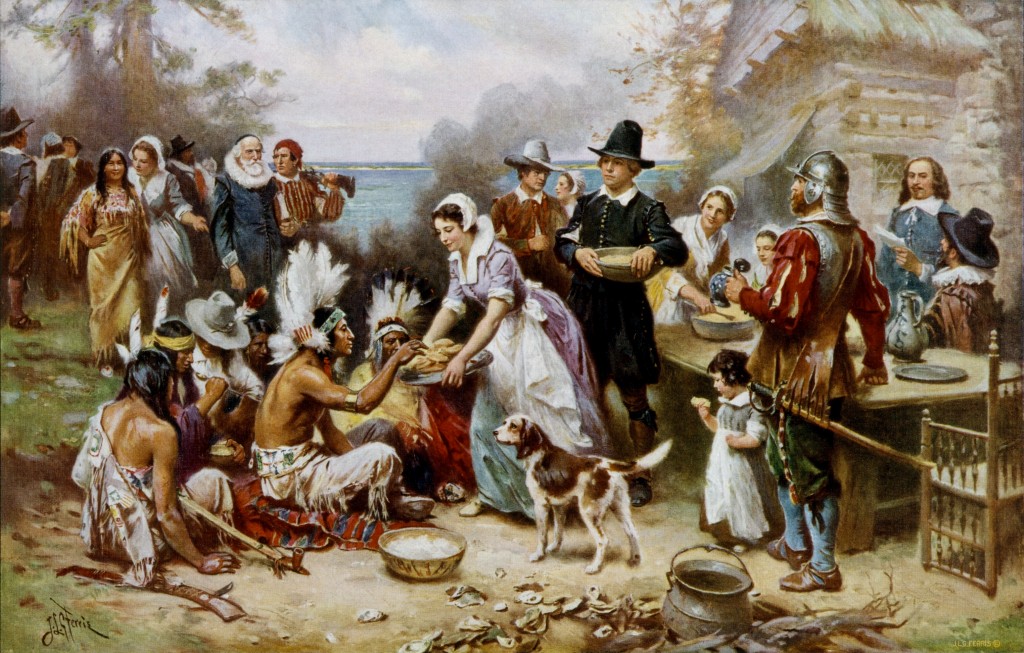 The Pilgrims didn’t really think of the First Thanksgiving as a “thanksgiving” at all. Within their Puritan theology and practice, a “day of thanksgiving” would have required fasting and prayerful contemplation of their gratitude to God for seeing them through a terrible series of trials and tribulations.

The actual feast they organized in September or October of 1621 was … not that.

David Silverman recounts the event in his 2018 work, This Land Is Their Land: The Wampanoag Indians, Plymouth Colony, And The Troubled History of Thanksgiving:

“… they planned to feast and indulge in some ‘recreations,’ including militia drill and target practice. After a session of drinking beer, ‘strong water,’ and perhaps wine, the men’s uninhibited boasting probably also led to contests of (staggered) speed and strength. Modern Americans tend to imagine the Pilgrims as stern and joyless. They could be both of these things, but not on this occasion.”

About 90 Wampanoags showed up unannounced, which momentarily created some tension, as Silverman recounts.

“Wampanoag tradition is that this force rushed to the scene out of concern that Plymouth was under attack because of the sound of gunfire from the colonists’ sporting. Ironically, the English initially feared that these armed Wampanoag were the real threat. Yet the two people possessed just enough trust in each other that no one overreacted.”

Once the party-crashing tension dissipated, the Wampanoag headed out into the woods and came back with five deer to add to a three-day revel.

The actual menu for the ‘First Thanksgiving’ in Plymouth Plantation in 1621 was a little different from — and richer than —  our “traditional” menu. Venison, obviously, was on the menu — probably roasted. Indian corn meal was certainly part of the repast. Gunmen went out and shot some waterfowl, and by this time the colonists also knew how to winkle eels out of their beds and make a meal of them. Plymouth was a seacoast colony, so there was a profusion of fish to feast upon. There were no potatoes — but our traditional turkey was certainly represented. Plymouth governor William Bradford wrote that:

“… besides waterfowl there was great store of wild turkeys, of which they took many…”

And did we mention beer? There was beer. The Pilgrims loved the stuff, and dozens of the colonial version of the growler surely adorned the puncheon tables where lay the feast.
So, if you’re looking to truly go traditional this Thanksgiving, you might want to unlimber the firearms for a shooting frolic, then head back home to cook up the eels and the venison, quaff locally-brewed beer, and race and wrestle with your friends.