Perhaps I was moving too fast along the trail and failed to cut the sign. Maybe it was over-tracked by other critters. Somehow I missed the 2018 publication of Unsettling the West Violence and State Building in the Ohio Valley. 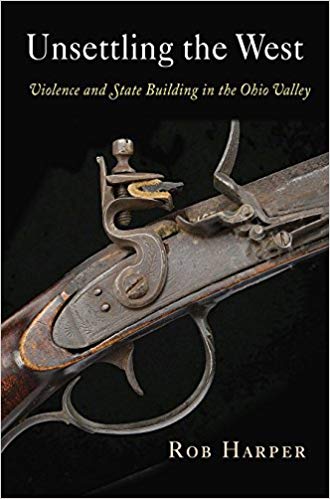 Well, I’m hot on its trail now. Given the near fifty-plew price tag, I ordered it up through interlibrary loan. We’ll see if it earns a spot in the permanent Frontier Partisans library.
Author Rob Harper Associate Professor of History at the University of Wisconsin-Stevens Point, is offering what purports to be a fresh interpretation of the nature of conflict and violence on the Ohio Valley Frontier during the American Revolution. I’m always open to such reinterpretations, while maintaining a healthy wariness of revisionism for revisionism’s sake.

Here’s the lay of the land…

The revolutionary Ohio Valley is often depicted as a chaotic Hobbesian dystopia, in which Indians and colonists slaughtered each other at every turn. In ‘Unsettling the West,’ Rob Harper overturns this familiar story. Rather than flailing in a morass, the peoples of the revolutionary Ohio Valley actively and persistently sought to establish a new political order that would affirm their land claims, protect them against attack, and promote trade. According to Harper, their efforts repeatedly failed less because of racial antipathy or inexorable competition for land than because of specific state policies that demanded Indian dispossession, encouraged rapid colonization, and mobilized men for war.
‘Unsettling the West’ demonstrates that government policies profoundly unsettled the Ohio Valley, even as effective authority remained elusive. Far from indifferent to states, both Indians and colonists sought government allies to aid them in both intra- and intercultural conflicts. Rather than spreading uncontrollably across the landscape, colonists occupied new areas when changing policies, often unintentionally, gave them added incentives to do so. Sporadic killings escalated into massacre and war only when militants gained access to government resources. Amid the resulting upheaval, Indians and colonists sought to preserve local autonomy by forging relationships with eastern governments. Ironically, these local pursuits of order ultimately bolstered state power.

Following scholars of European and Latin American history, Harper extends the study of mass violence beyond immediate motives to the structural and institutional factors that make large-scale killing possible. The Ohio Valley’s transformation, he shows, echoed the experience of early modern and colonial state formation around the world. His attention to the relationships between violence, colonization, and state building connects the study of revolutionary America to a vibrant literature on settler colonialism.

I think there’s something to his thesis, and from the academic reviews I’ve seen, it looks like he did a lot of yeoman’s work both in gathering and interpreting his source materials. And David Preston, whom I respect and who wrote the outstanding Braddock’s Defeat: The Battle of the Monongahela and the Road to Revolution had this to say:

“After decades of scholarship on the Ohio Valley’s history, it is difficult to say anything new or original. And yet, Rob Harper does exactly that, with a novel argument about the importance of coalition building and the influence of governmental power in the region. There is no other work on the Ohio Valley in which colonial and Indian peoples have seemed so real to me.”