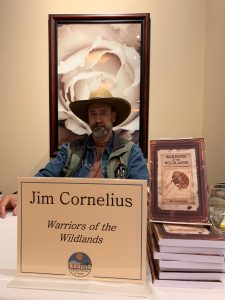 The weather turned cold and wet over the weekend, with the snow level dropping down to about 4,000 feet. The wind whipped the rain into stinging needles, occasionally breaking up the cloud cover to allow a glorious rainbow to arch over golden meadows.

In other words, it was an ideal weekend for surrounding yourself with books. The inaugural Sisters Festival of Books looks to have been a signal success. Sure was for me. My buddy Craig Rullman and I were both invited to Friday’s local authors session, where we sold copies of Warriors of the Wildlands and Craig’s The Bunkhouse Chronicles. I’m damn near sold out, so if any of you frontier partisans are looking to pick or give it for a Christmas gift, best to order from Paulina Springs Books sooner rather than later.

I was honored to be asked to introduce two of the featured authors — Joe Wilkins and David Joy — both of whom write contemporary fiction that is right in the Frontier Partisans wheelhouse. Wilkins, who is a fine poet, wrote his debut novel set in Eastern Montana:

Wendell Newman, a young ranch hand in Montana, has recently lost his mother, leaving him an orphan. His bank account holds less than a hundred dollars, and he owes back taxes on what remains of the land his parents owned, as well as money for the surgeries that failed to save his mother’s life.

An unexpected deliverance arrives in the form of seven-year-old Rowdy Burns, the mute and traumatized son of Wendell’s incarcerated cousin. When Rowdy is put under his care, what begins as an ordeal for Wendell turns into a powerful bond, as he comes to love the boy more than he ever thought possible. That bond will be stretched to the breaking point during the first legal wolf hunt in Montana in more than thirty years, when a murder ignites a desperate chase. Caught on the wrong side of a disaffected fringe group, Wendell is determined both to protect Rowdy and to avoid the same violent fate that claimed his own father.
A gripping story set in a fractured and misunderstood community, Fall Back Down When I Die is a haunting and unforgettable tale of sacrificial love. 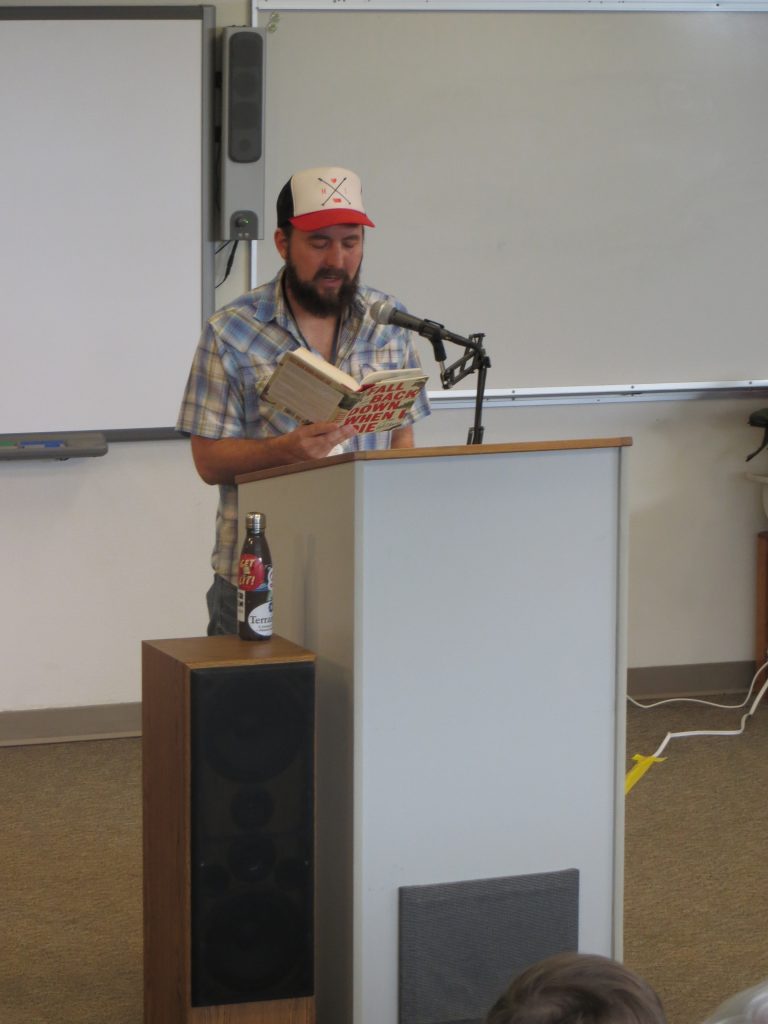 David Joy hails from the mountains of western North Carolina, where he has turned out three 100-proof novels of Appalachian noir and edited a collection of essays on flyfishing. He’s at least as passionate about forest and field as he is about his literary work. In fact, he told us:

This was his first trip to Oregon, and he intends to come back — to hunt turkeys. He saw plenty as local folks spent Friday taking him out to explore the landscape and to get in some fishing on the Metolius River.

I’m sure he’s telling the truth about his fishing skills, but the bit about the half-assed story is nothing but good humor. I already knew the man can write at an elite level he’s also a damn fine oral storyteller — which is, after all, the tradition from which he sprang. I was responsible for keeping the session to the schedule, and I almost blew it. I looked up and 40 minutes had passed in that strange way it does when you are spellbound. 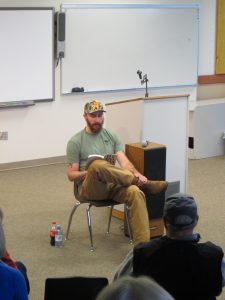 Joy’s most recent novel is The Line That Held Us.

When Darl Moody went hunting after a monster buck he’s chased for years, he never expected he’d accidentally shoot a man digging ginseng. Worse yet, he’s killed a Brewer, a family notorious for vengeance and violence. With nowhere to turn, Darl calls on the help of the only man he knows will answer, his best friend, Calvin Hooper. But when Dwayne Brewer comes looking for his missing brother and stumbles onto a blood trail leading straight back to Darl and Calvin, a nightmare of revenge rips apart their world. The Line That Held Us is a story of friendship and family, a tale balanced between destruction and redemption, where the only hope is to hold on tight, clenching to those you love. What will you do for the people who mean the most, and what will you grasp to when all that you have is gone? The only certainty in a place so shredded is that no one will get away unscathed.

Joy got quite a kick out of my observation that if Darl had just mounted a Leupold scope on his rifle, the whole damn story might never have happened.

You can find these books wherever you buy books — but please consider ordering from Paulina Springs Books, unless you’ve got your own indie source. It’s them as has the passion that makes events like the Sisters Festival of Books happen, and it pays to support ’em.

Unrelated to the festival, my copy of Lakota America arrived at Paulina Springs on Friday, creating a massive distraction from things like work…

Of all people, y’all know how spun up I can get over a tome like this. I am thrilled to dive into a deeply researched, vividly written history that explores complex dynamics of trade, culture, warfare and politics. Pekka Hamalainen, bless him, is determined to keep it real. Taking seriously the agency of indigenous peoples is a revolutionary historigraphical development — one that he helped pioneer — but there’s an obvious pitfall:

“The scholarly pendulum has swung abruptly — perhaps too abruptly. If Native Americans were for a long time stunted as historical agents, today it is the colonists and settlers who seem to be in danger of becoming caricatured, their motives and ambitions simplified, their complexity flattened. With the Indians commanding hte center stage, the whites often appear as a monolithic mass hell-bent on conquest, or as weak, hapless pawns in intricate Indigenous politics they could neither understand nor control. I have been guilty of such simplifying myself and have aimed for a more balanced exposition in this book. I have tried to keep all of the protagonists — Lakotas and their kin; the many native peoples they had dealings with; the French, Spanish, British and American colonist who came to them — in the frame of rounded historical figures. This has meant taking the ideals, anxieties, and ambitions of the colonists seriously, tracing how they clashed and intertwined with native ones, and how the Lakotas and European newcomers created lasting shared worlds even when they misunderstood, hated and killed one another.”