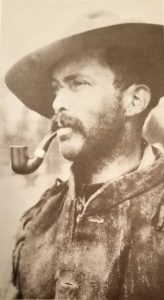 “There, lying on the muddy shore, was the largest crocodile I ever have seen. I placed my bullet at the junction of its skull and spinal column and it just quivered and lay still. It measured 14 feet, 2½ inches from the tip of snout to tip of tail.”

U.S. Army infantry and ordnance officer Townsend Whelen’s (1877-1961) outdoors skills and drive equaled those of his marksmanship and meticulous focus on testing rifles and cartridges.  Rambling afield in his youth with his .22 in New York’s Adirondack Mountains, Whelen grew devoted to shooting, hunting and camping. After five years as an officer in the Pennsylvania National Guard, in 1902 Whelen earned a commission in the U.S. Army, serving for close to forty years. And Whelen continued his passionate pursuit of outdoor adventure.

For “leaves and vacations invariably spent in the wilds served to gratify and intensify my longings for the peace and freedom found only there.”

Once Whelen’s National Guard service in the Spanish-American War ended without his unit being deployed, he obtained leave and went on his first major expedition. At the age of 23 in 1901,

“I ‘jumped off’ to the wildest and most glorious country – British Columbia. I left the end of the rails alone, with a saddle horse and two pack ponies loaded with grub and meager equipment into an uninhabited country I knew nothing of – not even how it looked on maps.” (emphasis added) After “a few days wandering unguided up valleys and over snow-covered passes, I came to the bivouac of an old hunter and prospector.” Whelen and “Bones” hit it off, becoming “partners to hunt, prospect and trap in the wild regions where there was not civilization. Over nine glorious months Bones taught me the way of the mountains as only those of the Old West knew it.” (“On Your Own in the Wilderness,” 1958). 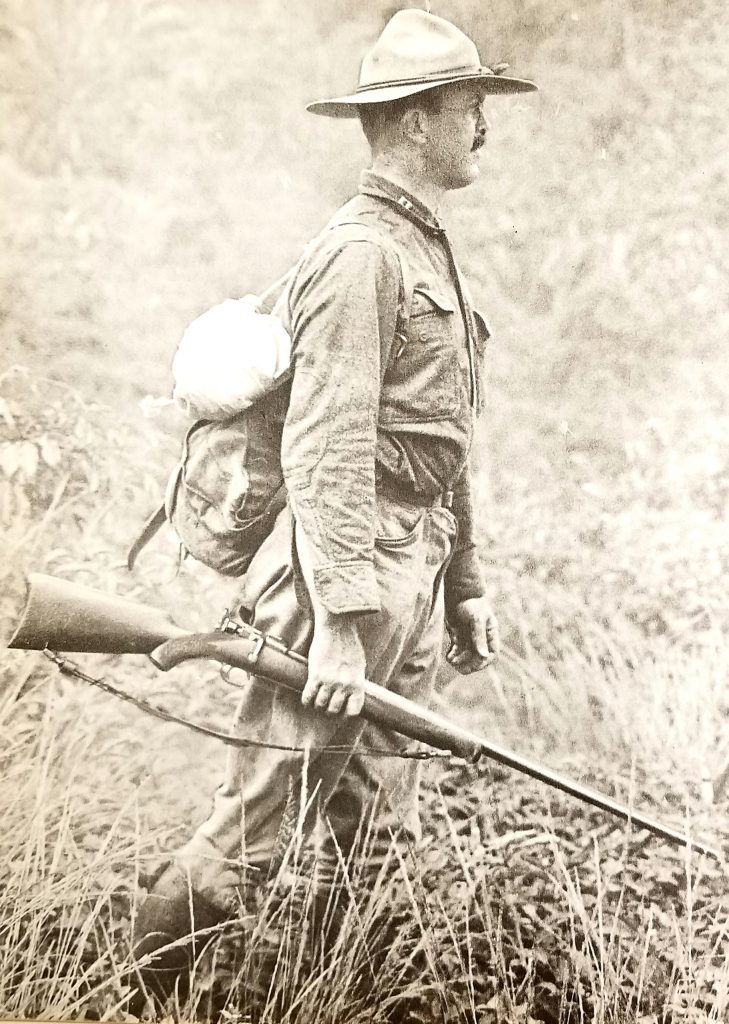 Whelen made another extensive expedition to British Columbia in 1906.

In his autobiography MR. RIFLEMAN (1965), Whelen recounts his three years of adventure in the wilds of Panama (1915-1917). The U.S. realized that the still under construction Panama Canal might need to be defended after completion. And that the surrounding forest was “terra incognita,” unmapped and unknown to Americans. Mr. Rifleman Townsend Whelen — who perhaps also should be called Mr. Backcountry – was assigned to lead troops exploring and mapping the “extremely rough mountainous region thickly covered with primitive rain forests” northeast of the Canal to the sea. And what adventures they had, at times almost idyllic.

Whelen scouted out a base camp site, and brought in heavy canvas tents as they would be there for months.

“Everywhere was shade, and clearing out the underbrush let breezes in from the lake. This was one of the most comfortable and beautiful camps I have ever seen. There was fine bathing and fishing in the lake, and good hunting in the hills, while to the east stretched the primeval forest where the work ahead of us lay.” In methodical fashion, Whelen and his men “first proceeded to explore and map the terrain within a day’s journey of base camp. This yielded a fairly complete map. Then, I took four men with me on a reconnaissance along the crest of the mountain range to the east.”

After additional reconnaissances carrying 40-pound packs, Whelen pioneered what is now called ultra light backpacking. He reduced his load to 12 pounds, excluding food and rifle. In the balmy climate, neither tent nor sleeping bag was necessary. He set up a tarp like a lean to as rain shelter, with a mosquito bar (netting) inside. The netting resembled an oblong box, and by tucking the netting underneath his ground cloth he prevented mosquitoes and ants from entering. 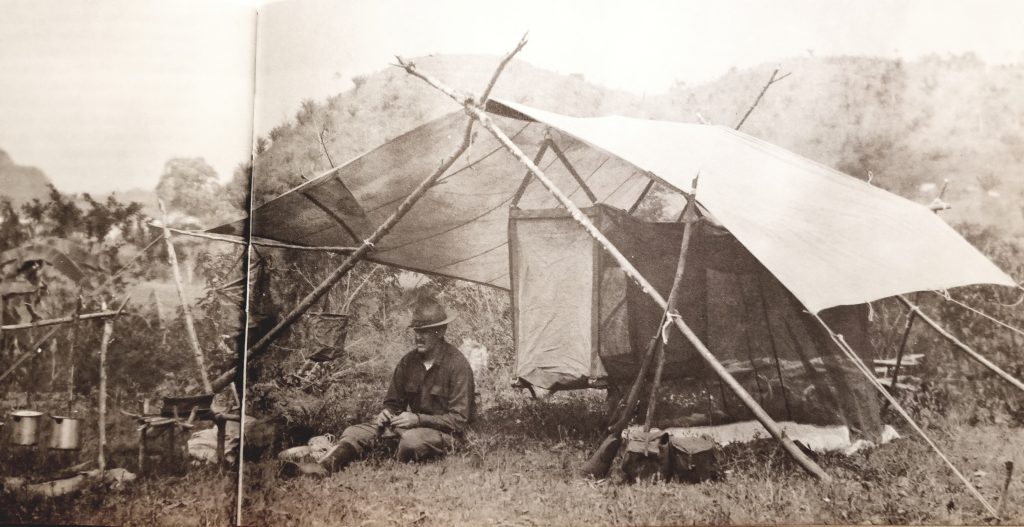 As exploration and mapping proceeded, Whelen learned why the region was so unpopulated.

“In primitive times this country had a dense Indian population. When the Spaniards came they enslaved these people, forcing them into hard labor and work on their fortifications. When one bunch died, their masters simply tossed their bodies into the seas, went into the bush and corralled another lot. This, together with diseases imported by the whites, and malaria and yellow fever, completely depopulated this country.”

Whelen describes the villages on the Caribbean coast, the inhabitants and their lifestyles, and the rivers that the soldiers explored and mapped. He also describes the large number of small and medium sized animals he shot with his .30-06 Springfield — which comprised most of the meat for the troop — what they tasted like when cooked, almost all quite delicious, even sloths.

After deciding to travel along the coast by dugout canoe, the heavily laden cayuca swamped.

“The men lost their packs, food and rifles. We were half mile out at sea. Fortunately, the wind pushed us ashore.”

Whelen had kept his arm in the straps of his rifle and pack, saving both. Straggling into Colon disheveled and famished, they wrangled a private dining room in the Cristobal Hotel. And it was outside Colon that Whelen shot the crocodile mentioned at the top of this article. All told, the chapters on Whelen’s Panama adventures alone were worth the price of MR. RIFLEMAN.

Whelen’s strong drive and rigorous outdoors skills led to him rambling in the wilds for over 40 years. He valued ability with arms, strength, endurance, and the competence to rustle for oneself. And he had a standard:

“No man is competent unless he is able to stalk alone and armed through the wilderness.”

Your writer — an experienced hiker and camper — wonders if I could meet Colonel Whelen’s standard of competence. Surely some Frontier Partisans readers could, and perhaps do. From over 60 years ago, outdoorsman par excellence Townsend Whelen challenges the rest of us. 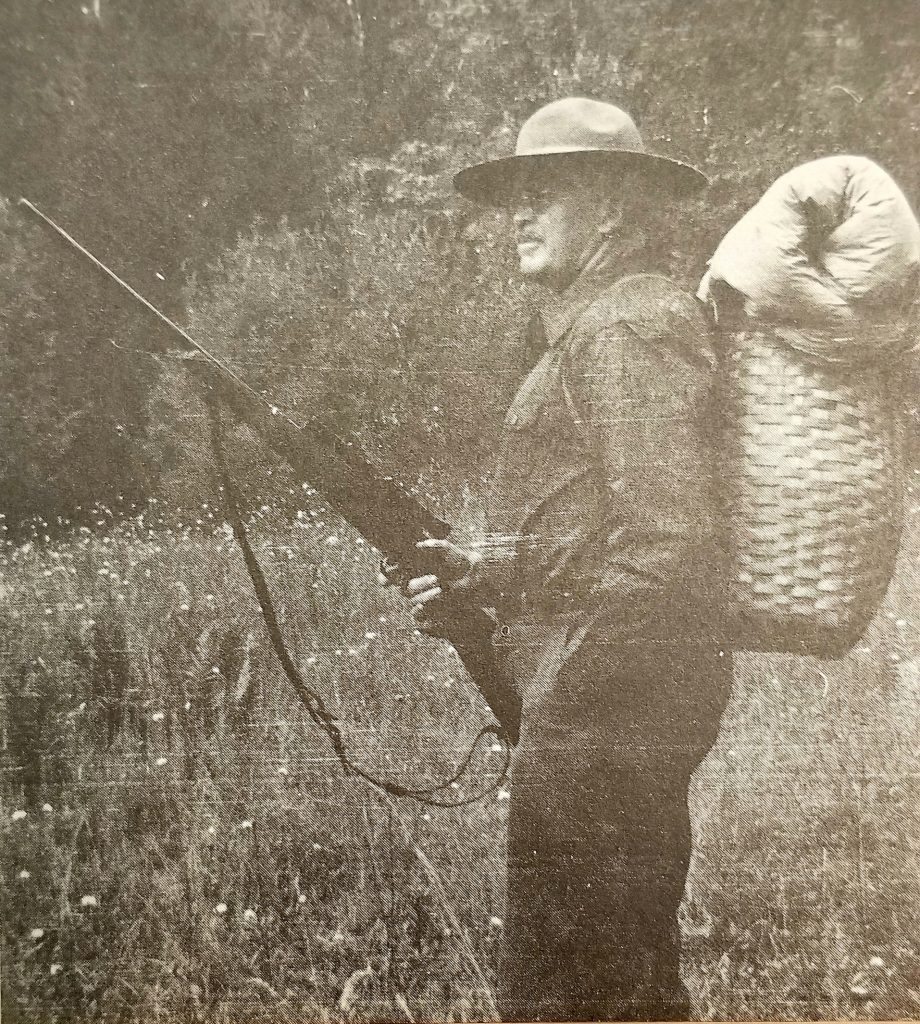