This one is a music-heavy trapline. It’s Sisters Folk Festival month, after all. 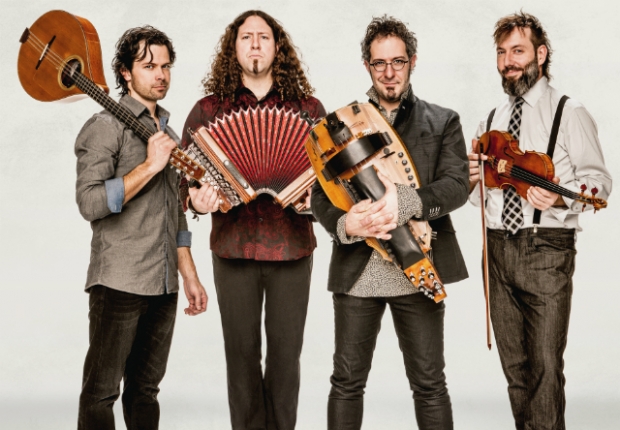 The band that brings the most “frontier” to the festival is Le Vent du Nord. Ceili wrote a profile of the band for The Nugget, which you can read here:

The traditional Quebecois band, Le Vent du Nord is an award-winning group considered leaders in the francophone folk movement. They draw upon traditional sources and original compositions while enhancing a driving, soulful sound rooted in the Celtic diaspora.
Andre Brunet, fiddle player of the band spoke with The Nugget about his role in the band and how honored he feels to be in this long-lasting Quebec-based band playing songs of his homeland.
Le Vent du Nord has been a band for 17 years and has done over 1,000 shows. Throughout the years, the membership of the band has fluctuated, but the group now is as solid as ever.
“It is an honor to be a part of this band who plays such traditional music that I have such an appreciation for,” said Brunet.

Their music evokes northern lakes and rivers, the singing of voyageurs and coureur de bois sliding through the woods, fusil in hand… 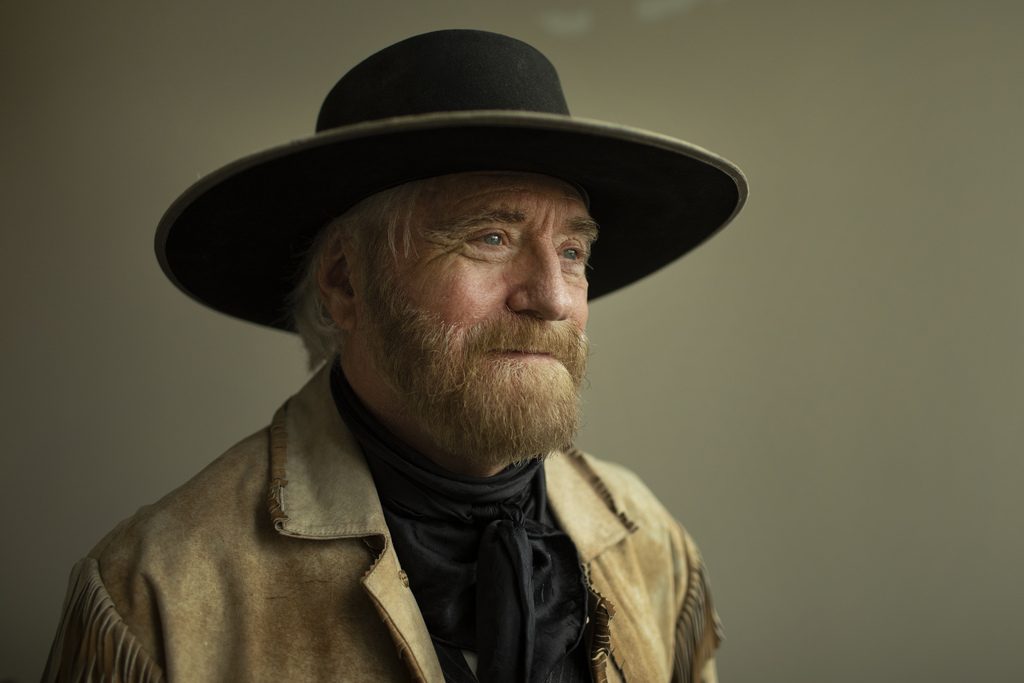 Michael Martin Murphey’s 1970s ballad Wildfire is being turned into a movie featuring Frontier Partisans favorite Wes Studi. Murphey was one of the original Austin Cosmic Cowboys back in the wild ’70s. He’s since become a stalwart of the Western music revival and a scholar of the frontier west. And these days he’s looking like Jim Bridger did when he scouted at Fort Phil Kearny…

The scenery and Cherokee culture of Tahlequah and the county will be captured next week as filming for the movie “Wildfire” is set to begin.

Shepherd, who is a champion barrel rider and active in school drama productions, will play the lead role of Samantha, a girl who moves with her family to Tahlequah after the death of her father. She works through her grief with the assistance of the cast of characters and a friendship developed with a wild horse.

Those helping the character Samantha will be: a Cherokee elder, Studi; a musically inclined pastor, Murphey; a horse ranch manger, Grunberg; a mentor, Heche; and a sage, Lewis…Pancho, an acclaimed dancing and performing horse, will be the lead horse as guided by trainer Charro Jerry Diaz…

Featuring six songs, including three new originals, “Wildfire” is meant to “appeal to music fans, horse-lovers, mainstream audiences and families looking for films with an inspiring and uplifting message.” 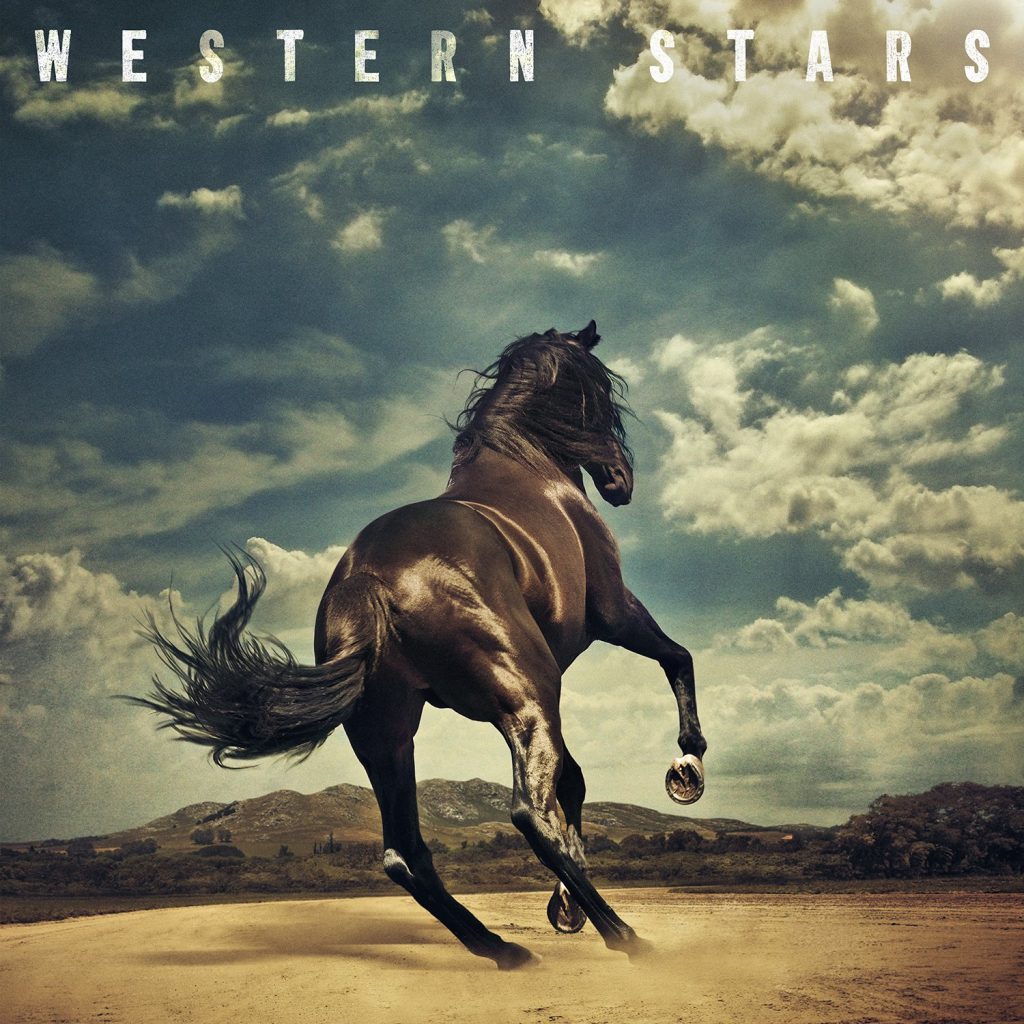 Another musician with his eyes on the Western Stars is hitting theaters. Talking about the New Jersey cowboy — or is that cowBOSS? — Bruce Springsteen. Springsteen has always been drawn to desert landscapes and Western themes, and that is on full display in the new album. The trailer for the forthcoming Western Starts documentary makes me wistful. My friend Cris Converse hosted house concerts in an old barn on her ranch for a number of years, and it was hands-down the coolest venue to play in the whole region. The ranch was sold and The Barn hasn’t heard a guitar chord for years. Miss those days. But anyway…

One more from the Frontier Partisans songbook:

Ken Burns’ Country Music premiers on PBS on September 15.  I’ll be there. An extended preview can be found here.

Last weekend, an outfit called Trash No Land organized a cleanup at Zimmerman Butte (aka The Pit). About 20 local shooting sports enthusiasts, along with some Forest Service personnel, turned out to get rid of the accumulated detritus of hundreds of mad minutes. The area wasn’t really in bad shape, but there was nonetheless plenty of work to do. The FS dropped a 60-trash receptacle there and hauled out the junk.

A grand thing, bringing people together to keep our own joint in order. 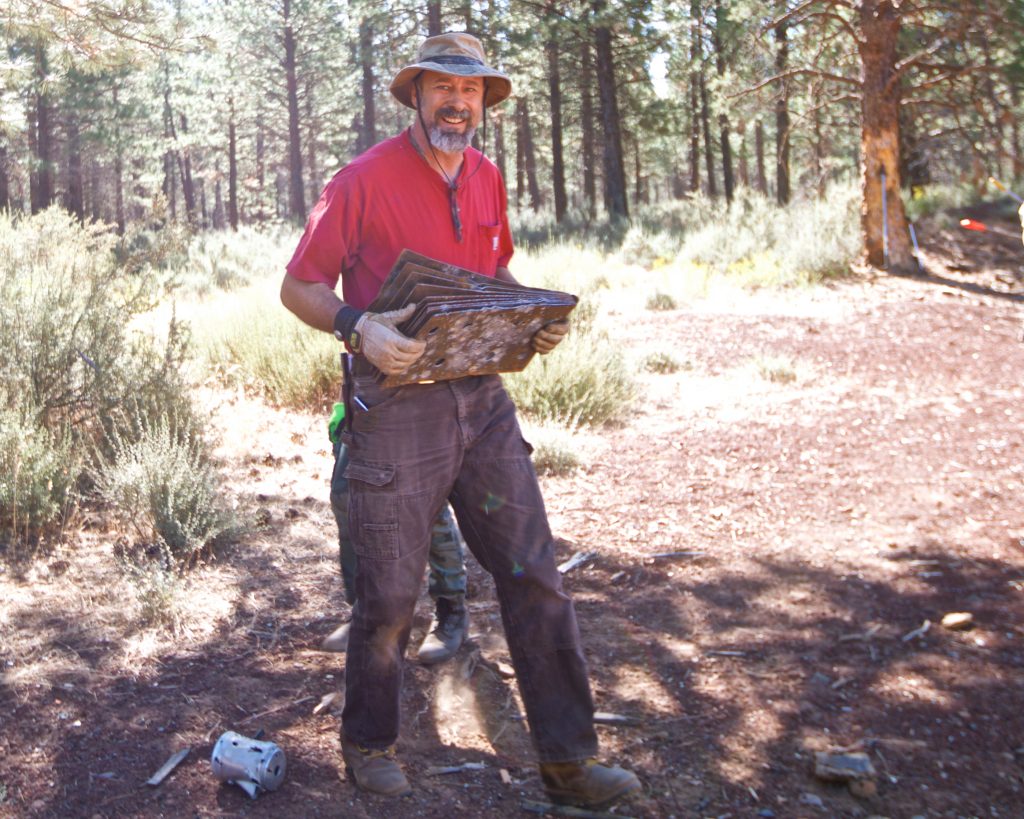 On Wednesday, Ceili and I redeemed an inexplicable failing of Clan Cornelius: In all our years living in Oregon, we had never been to Tamolitch Blue Pool. This beautiful spot was formed where the McKenzie River ducks underground for a span before reemerging in a rushing torrent. The water is 37 degrees. Ceili went in. I did not. 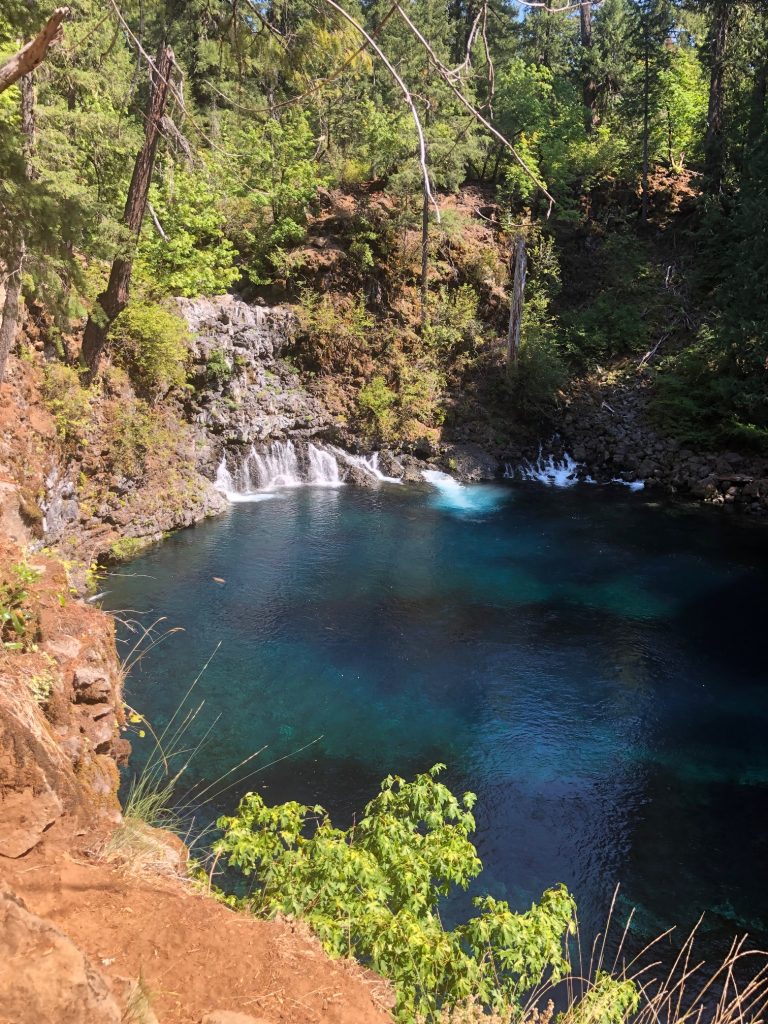 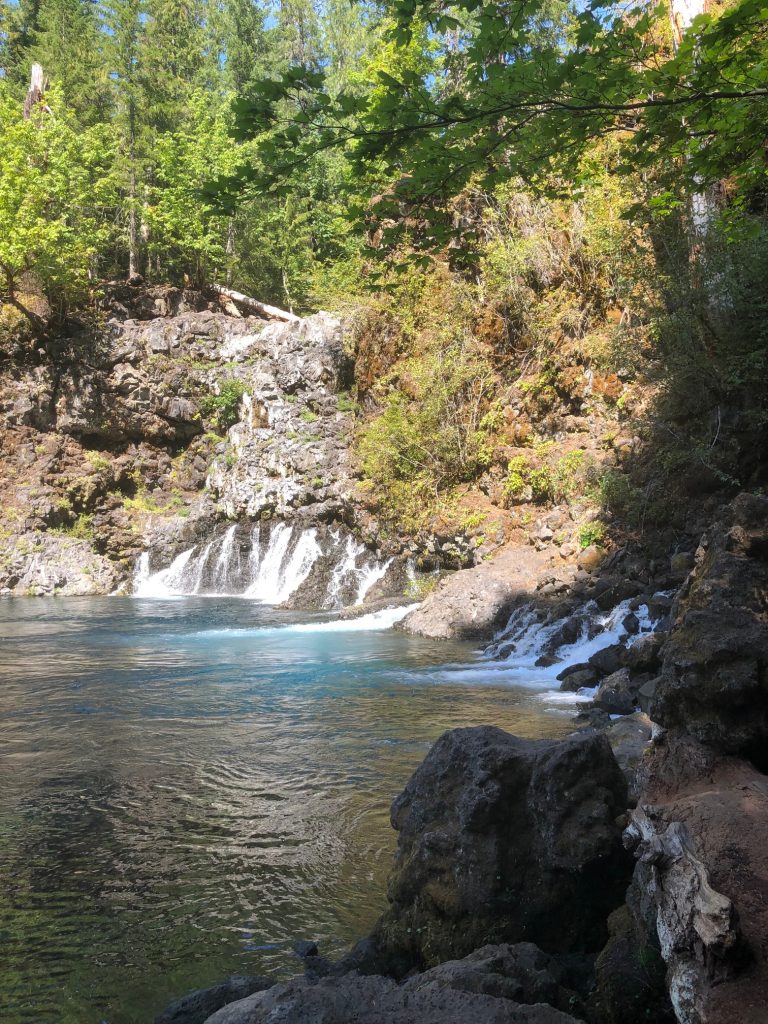 That water is COLD. 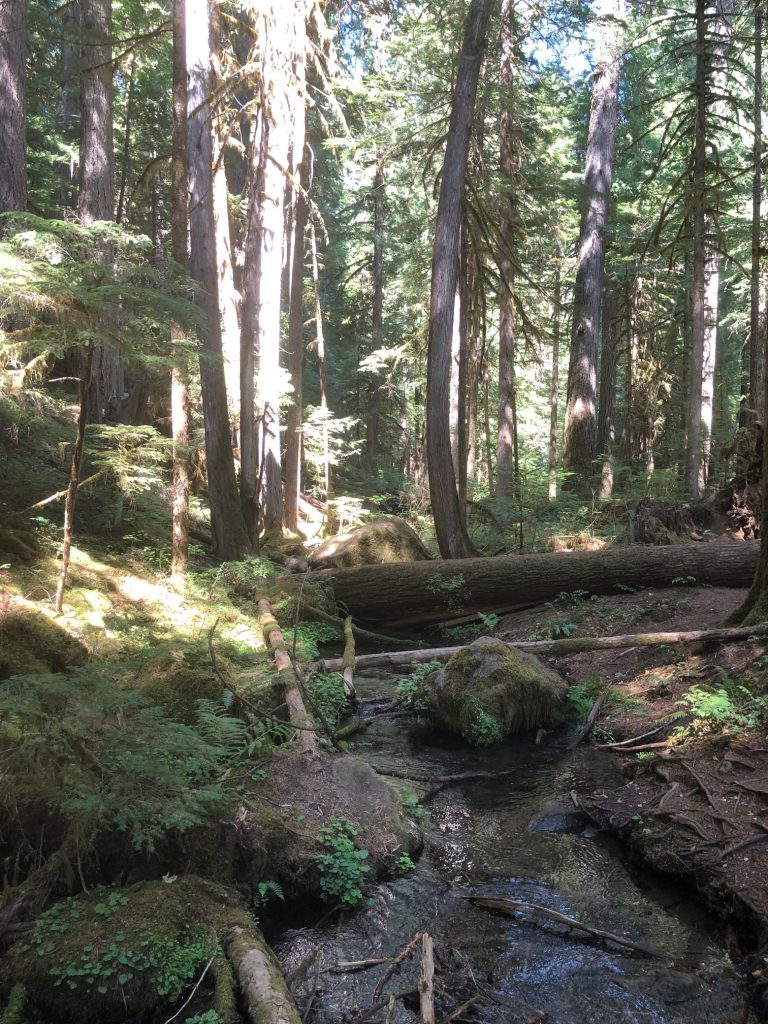 The 2-mile trail to the pool starts in your basic enchanted forest. 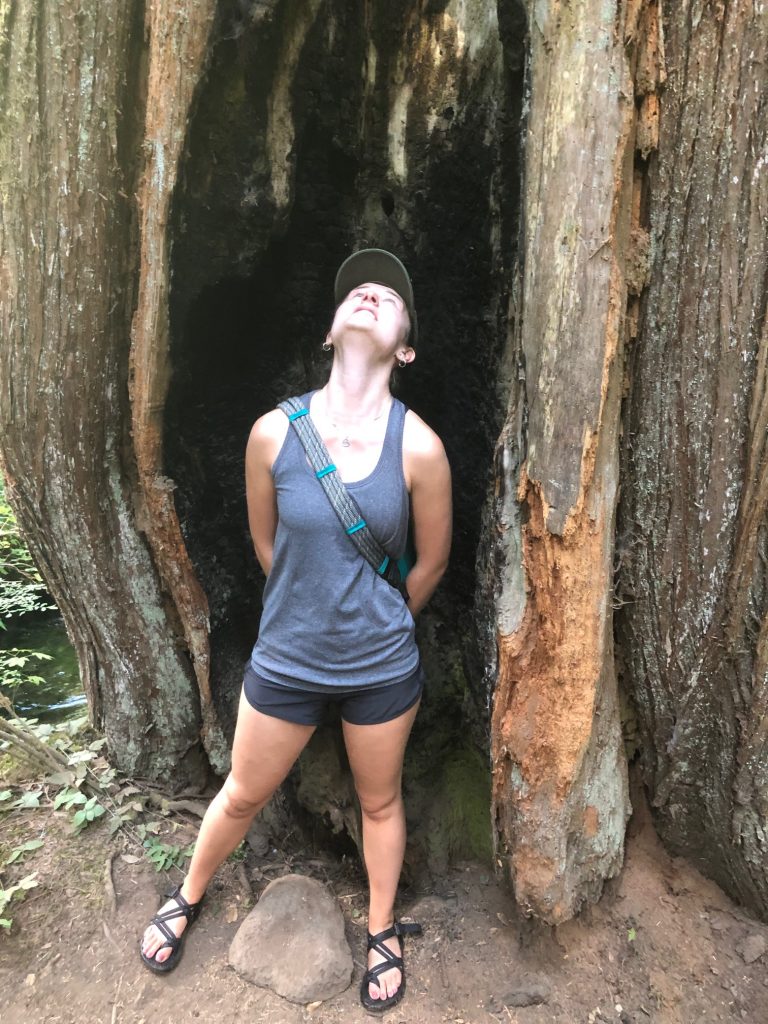 Ceili in one of the biggest lightning hollow I’ve ever seen. The majestic old Doug Fir is alive and healthy. 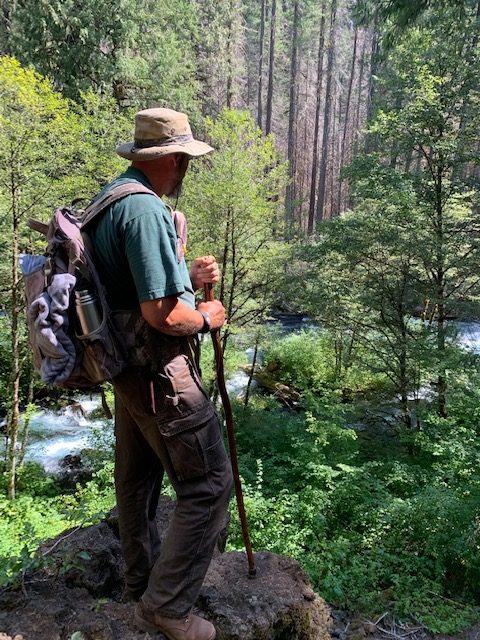 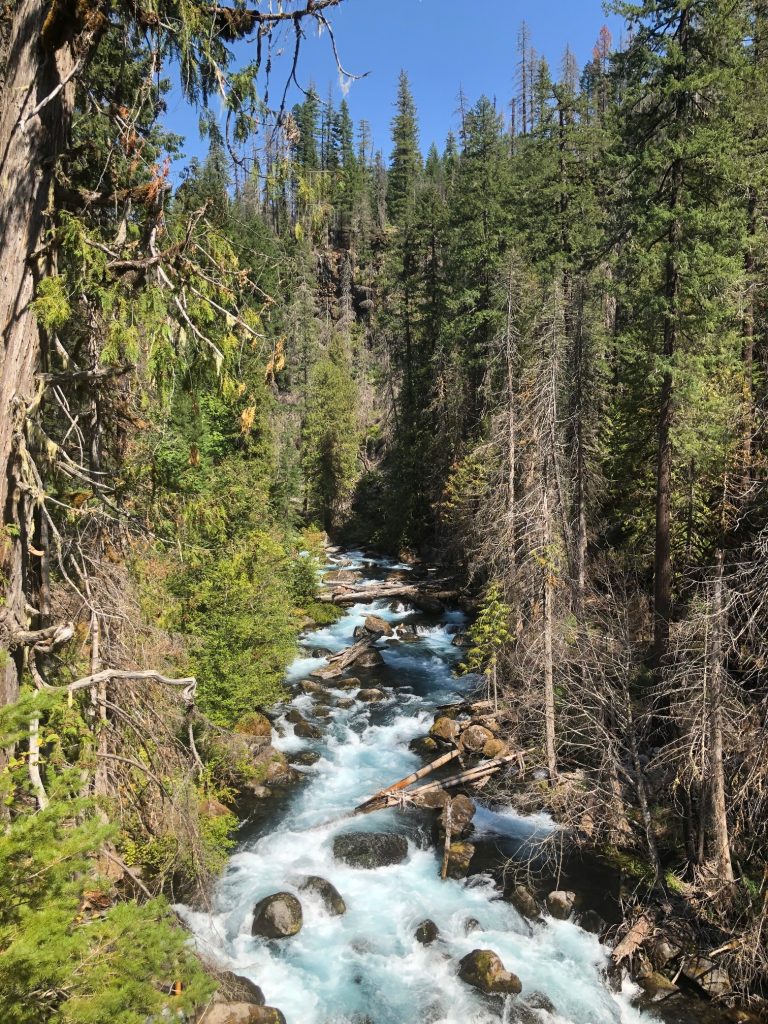 The McKenzie swiftly becomes a torrent again below the pool.

Irish Times film critic calls The Dig “an Ulster Western.” That gets my attention.

Andy and Ryan Tohill, directors of this much-acclaimed Northern Irish feature, leave us in little doubt that – despite setting the action near a border that offers no vistas of the Rio Grande – they are working within the traditions of the western.

The local barman pours whiskey straight from the bottle into a shot glass. Law enforcement is in the hands of just one man who, when challenged, lifts his shirt to reveal a pistol in a side-holster. Moe Dunford does what Moe Dunford has to do.

This being an Ulster western, the searchers (unlike those in The Searchers) stay in pretty much one place and pursue their hunt through a Sisyphean process that, involving piles of earth, would suit the characters in a Samuel Beckett play.

Rambo: Last Blood drops on September 20. We’ll see. As mentioned previously, the original First Blood — both the novel and the movie — were worthy, packing a genuine storytelling punch rooted in the way Americans were just beginning to interrogate the Vietnam experience and its impact on veterans of that conflict. The subsequent movies took the character into more and more outlandish action-hero territory — inevitably, I suppose, but unfortunately. I’m hoping that this coda will hearken back to the heart of the original. 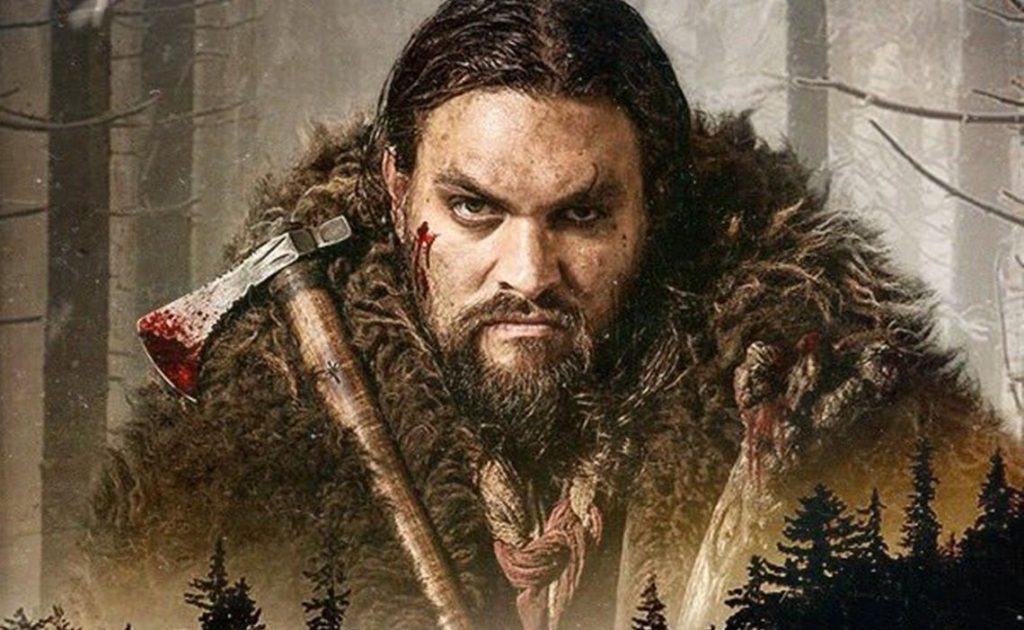 The soundtrack for Netflix’s Frontier has been released. It’s potent, with an edge of the weird that I find compelling. you can download it here.

All of the tracks from David Arkenstone’s soundtrack for the History Channel’s 1995 docudrama Frontier are now available on Youtube as well.