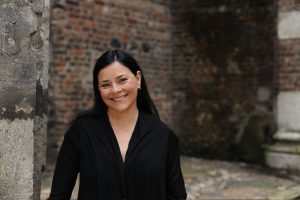 There’s this thing called The Outlander Effect. It refers to the massive impact the Outlander series of books by Diana Gabaldon and the STARZ series based on the novels on the economy and culture of Scotland. Over the past quarter century, the books and show — largely set in the Highlands at the time of the Jacobite Rising of 1745, then moving to the North Carolina backcountry in the run-up to the American Revolution — have created a measurable increase in tourism in the Scottish Highlands.

My brother John and his wife Roxane were early carriers of The Outlander Effect. They fell in love with the novels in the 1990s and visited Scotland entirely because of them. Thousands, maybe millions, have followed, dropping millions of pounds into the Scottish economy.

‘I’ve seen a film studio flourish in the centre of Scotland, complete with workshops, several sound stages, edit suites and an impressive costuming department, employing huge numbers of local staff and benefiting local businesses. I think we grossly underestimate how much influence and enterprise Diana Gabaldon has brought to us, placing the spotlight on our country and celebrating our culture. Not only that, she has written some devilishly good characters and really enthralling books. Keep writing Diana, and thank you.’

I experienced The Outlander Effect — or perhaps more accurately The Gabaldon Effect — for myself last Friday. This happened: 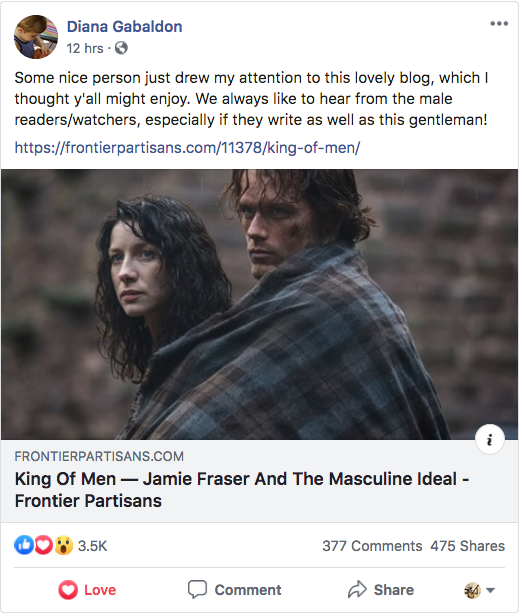 It took me a minute when I sat down with my coffee and opened my laptop to figure out that a flash-bang grenade had just gone off in my cabin. I’m surprised my laptop wasn’t reduced to a smoldering heap of silicon slag. Let’s put it this way: It was like thousands of settlers pouring down the Wilderness Road into Kaintuck in the moccasinprints of Daniel Boone — all compressed into a few hours.

My soundtrack for the morning could only be this:

The happy result of Diana Gabaldon pointing her legion of devoted readers and Facebook followers down the trail to Frontier Partisans is that we have a whole bunch of new folks to welcome to the campfire. So… welcome.

(For those Frontier Partisans who have not yet unfurled the Cross of St. Andrew banner, the first two seasons of Outlander are now on Netflix. For the record, my reading is up through Voyager; The Scottish Prisoner; and the stories in Seven Stones To Stand Or Fall).

Of course, I felt honored to earn a shoutout from the creator of a Story that my Clan loves unreservedly. More than personal validation though, I see in this episode a reminder of a belief that I treat as my lodestar: Stories matter. Telling them, reading them, singing them, listening to them, watching them. Living them. Diana Gabaldon’s remarkable accomplishment is to have created a story and characters that are as real to those who love them as any flesh-and-blood person, a Story that has led legions to delve into history, to travel — to live in the Story themselves and to create their own.

What we do here at Frontier Partisans is what the ace podcaster Dan Carlin calls “historical storytelling.” Stories from frontier cultures around the globe and across time all the way up to the present. For I am fascinated by continuity in history, the manner in which old, even ancient, modes persist amid the flashy now of modernity and post-modernity. 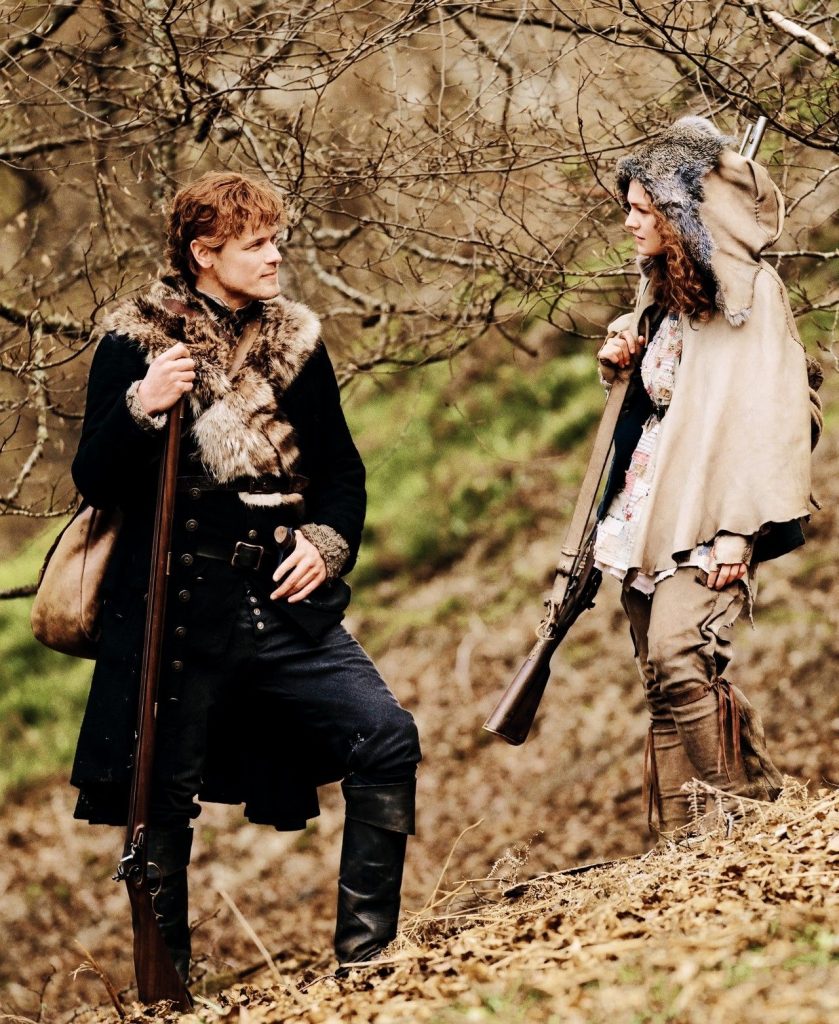 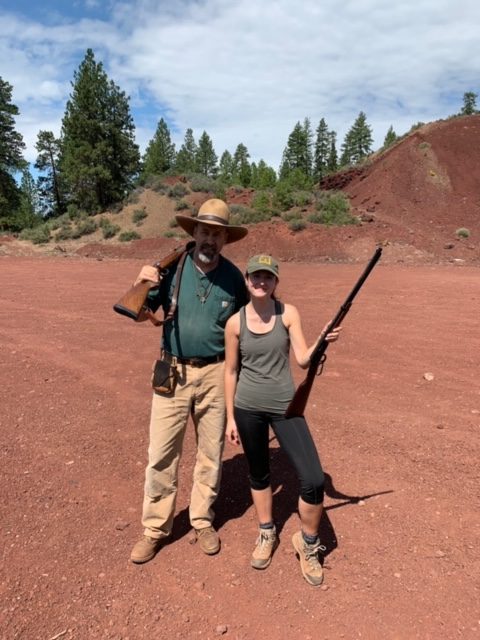 Traditions are carried on…

There’s always music ’round this campfire, and myth and legend are welcomed as honored guests when the darkness encroaches around the circle of light and the wolves howl across the prairies and among the trees. So spread your robes and join us. 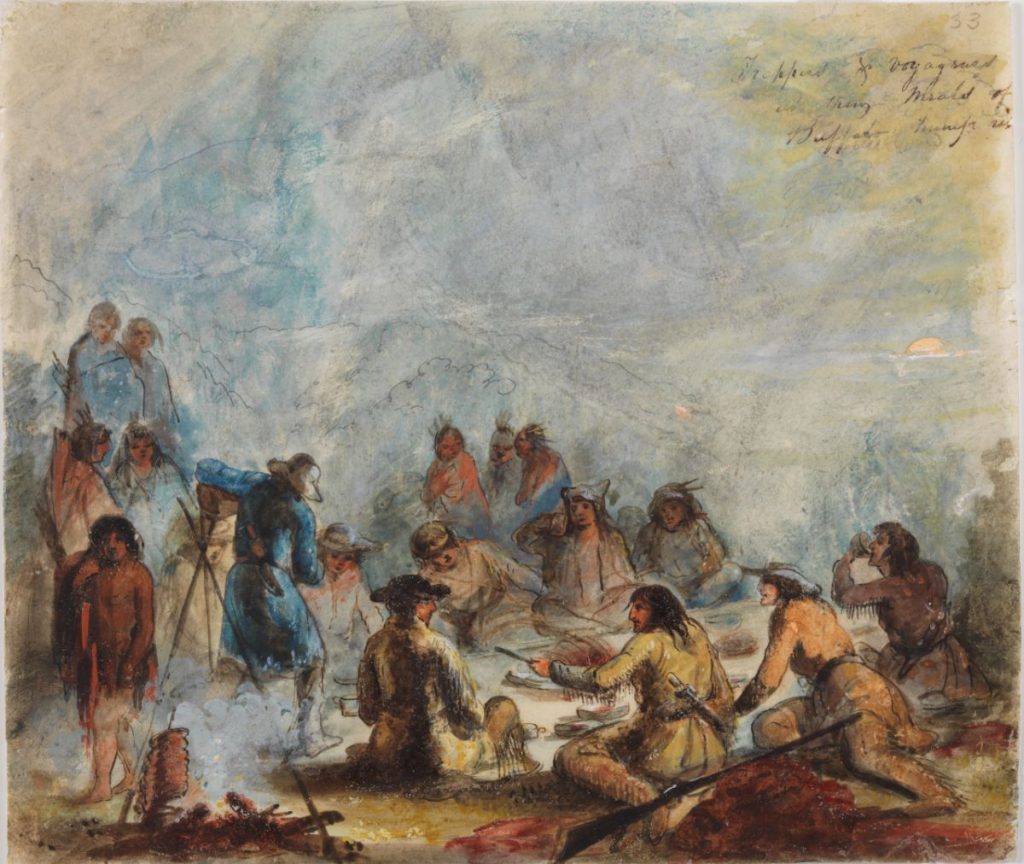 ”Sunrise, Trappers and Voyageurs at Their Meals of Buffalo Hump Rib.” Art by Alfred Jacob Miller.

Previous Post: « A Fine Fandango
Next Post: Must Be A Certain Kind Of Fool — An Appreciation Of ‘Desperado’ »