“If you go into our hunting country, our people will wipe you out.” 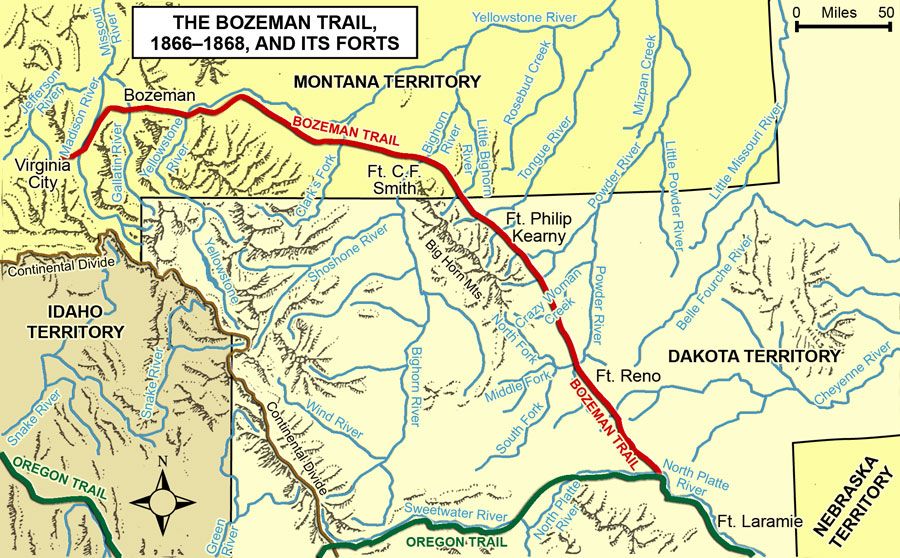 Like most trouble, it started over gold. More precisely, it started over a route to the gold. The Bozeman Trail, scouted in 1863 by Georgia prospector John Bozeman and mountain man John Jacobs, was an offshoot of the  Overland Trail that led directly to newly-established goldfields in Montana. It cut 400 miles off a circuitous trek to Virginia City. Unfortunately for gold seekers and the U.S. Army that was tasked with protecting them, the trail ran north and west from Fort Laramie, skirting the eastern flank of the Bighorn Mountains — right through the heart of the Powder River Country that the Lakota and Northern Cheyenne had recently wrested from the Crow in epic intertribal warfare.

The Lakota and Cheyenne had mostly accepted the Overland (Oregon) Trail along the North Platte River; in fact some thousands of their people made their living loafing around Fort Laramie living on annuities and looking for handouts from traders and travelers. But the free northern people were not going to stand for a heavily-trafficked trail driven through the last great buffalo grounds. Red Cloud and the Oglala in particular were ready to kill to keep travelers off The Bozeman Trail. 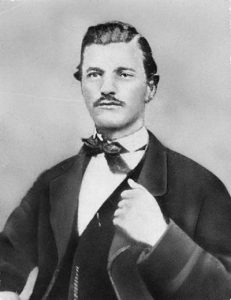 John Bozeman himself led a wagon train up his trail and into the Powder River Country in 1863. The Lakota stopped him and gave him the sternest possible “No Trespassing” warning. Bozeman’s assurances that he and his train were just passing through cut no fat with the Sioux. An old head man gave Bozeman the word:

“You are going into our country where we hunt. You people have taken the rest. Along the great road to the south, white men have driven away all the buffalo and antelope. We won’t let you do that here. If you go into our hunting country, our people will wipe you out.”

Bozeman wanted to push on, despite the warning. The leaders of the wagontrain were less bold — or reckless. They deliberated for 10 days before turning around and heading back south, where they would return to the Oregon Trail and take a different, less direct cutoff that kept them west of the Bighorns and out of the Powder River Country. Bozeman himself, with nine companions, forged ahead.

Despite warnings and thefts and occasional killings, emigrants did push through on the Bozeman Trail, heading for the golden Gallatin Valley. In 1864, 450 wagons and 1,500 people pushed up the trail. One emigrant train ran into a fight, but Henry and Spencer repeating rifles won the day, leaving 13 Indians dead.

The climate was growing hostile, but there was not yet a war on the Plains. However, in late 1864 a storm would break far to the south in Colorado. The thunder and lightning would reverberate in the north and there would be a rain of blood.

The Sand Creek Massacre was a vile episode, an atrocity that stains the soul of the nation to this day.

On November 29, 1864, a militia unit known as the Colorado Volunteers, under the command of an ambitious religious fanatic named Col. John Chivington, struck the Cheyenne village of Black Kettle. Cheyenne warriors had been raiding across Colorado, but Black Kettle’s village was peaceful — and supposedly under the protection of the U.S. Government.

The militia slaughtered and mutilated an estimated 53 men and 110 women and children. 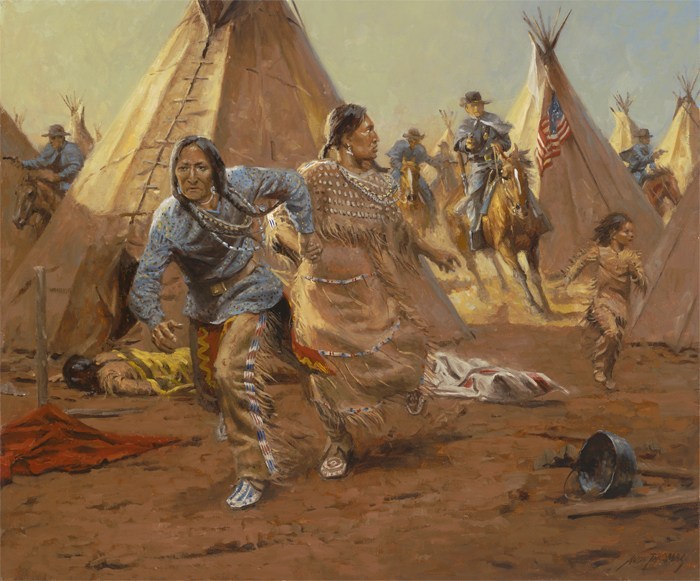 Apart from the grotesque moral transgression, Chivington’s action was a massive strategic error. Instead of fulfilling the putative mission to protect frontier settlers, Sand Creek was akin to tossing a parfleche packed with buffalo fat and gunpowder on a smoldering fire — producing an explosion and inferno that would burn for a decade.

With the spring thaw, a torrent of Cheyenne Dog Soldiers burst across the plains, raiding, burning, killing and scalping in a quest for revenge. As was always the case in Frontier Partisan warfare, the blade of vengeance fell almost entirely on the innocent.

A huge contingent of  Cheyenne moved north toward the Powder River sanctuary of their Northern Cheyenne kin — murdering and looting along the way. When they arrived in the north in March of 1865, their account of the Sand Creek Massacre sparked intense rage among the northern Indians — and gave the militant Red Cloud everything he needed to persuade the tribes to unite and go to war with the whites in earnest.

It would be an oversimplification to treat Red Cloud as the “chief” or  commanding general of the Powder River Country insurgents. That’s simply not the way the highly independent and individualistic culture of the Plains tribes worked. I have avoided using the term “Red Cloud’s War” for this conflict for this reason.

But the deadly Oglala warrior did exert profound influence, and his military leadership was exceptional. His first remarkable feat as a leader of a massive combined force of Lakota, Cheyenne and Arapaho was to craft a coordinated campaign of simultaneous raids on outposts and transportation facilities.

In one of these, his warriors raided a stage relay station west of Fort Laramie, killed five white men and crucified them on trees. It was a message meant to terrorize, and it did. The raiding was intense enough that the U.S. Army closed the Oregon Trail to civilian traffic in May 1865.

In July 1865, Red Cloud and the Cheyenne warrior Roman Nose gathered more than 1,000 warriors — perhaps as many as 3,000 — to attack a small post located at an ancient crossing of the North Platte River northwest of Fort Laramie, unimaginatively named Platte Bridge Station. 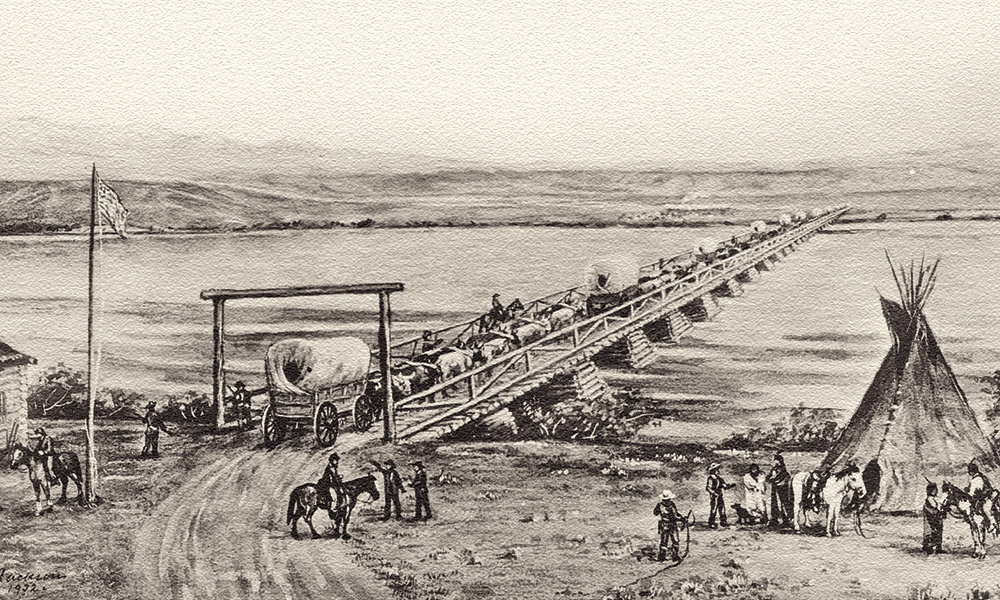 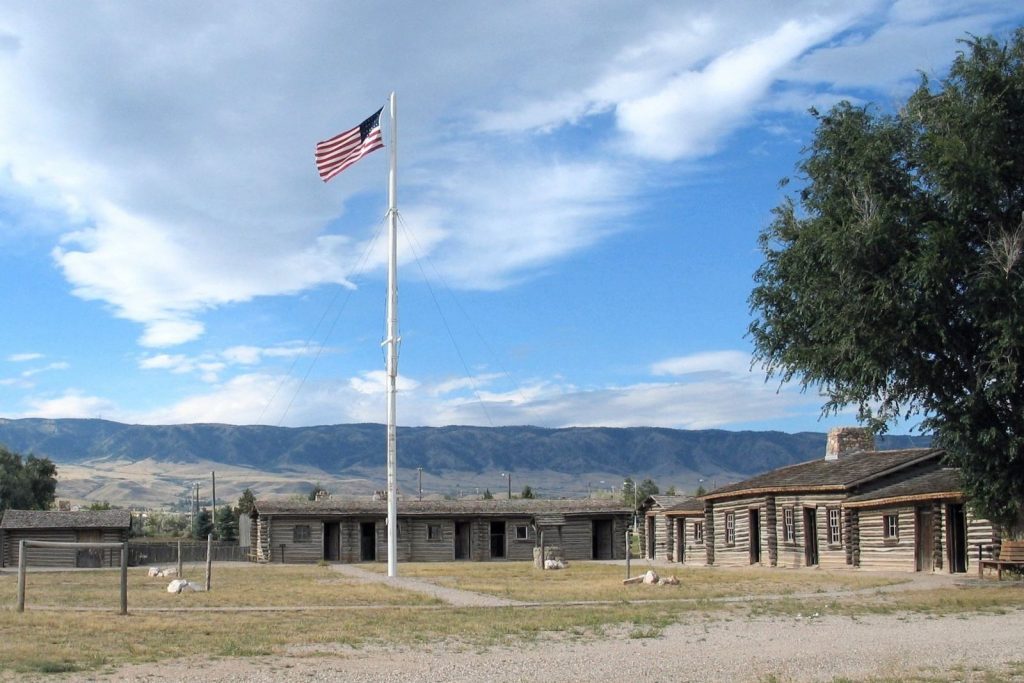 Fort Caspar Museum — a reconstruction of the frontier post — at the site of Platte Bridge Station.

With a massive cavalry army ready for action, on July 26, 1865, Red Cloud and Roman Nose tried to lure the 120-man garrison of combat effectives out of Platte Bridge Station, running decoys across the prairie and taunting the soldiers. A field battery rolled out to lob a few shells at the Indians, but the garrison stayed put — until they got word that a freight train was inbound, and, given the presence of the enemy, they needed an escort.

Nobody wanted that mission; in fact, several officers placed themselves on sick call as a means of refusing it. Twenty-year-old Caspar Collins, the son of a Civil War officer for whom Fort Collins, Colorado was named, accepted the duty, even though he seems to have recognized it as a suicide mission. He gave his cap to a friend “to remember him by” and accepted the loan of a brace of Navy Colts and a big high-strung charger to ride out on.

“I know what it means to go out,” he told his worried comrades, “but I’ve never disobeyed an order. I’m a soldier’s son.”

Collins led 28 men out of the post, across the bridge and turned toward the location of the freight wagons. A small field artillery unit crossed the bridge and established a position to hold his line of exfiltration.

The Lakota/Cheyenne force pounced immediately, swarming the small command. Lt. Collins took a wound in the hip and reeled in the saddle. His powerful horse bolted directly into the Indian force, plowing over the smaller Indian ponies. The last anyone saw of him, he was still in the saddle — with an arrow drilled into his forehead, right between the eyes.*

One soldier took a lance in the torso and with a dying effort slid down the shaft, pushed out his revolver and blew out his slayer’s brains. 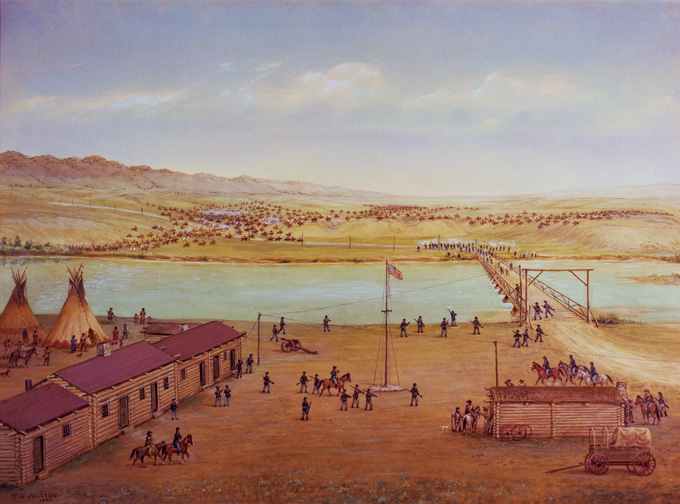 The Battle of Platte Bridge Station. The painting depicts the Indians swarming Lt. Caspar Collins’ command just beyond the bridge.

Remarkably, most of the command was able to break free and make it back to the bridge, though almost everyone was wounded. The Lakota failed to cut the survivors off, which mightily pissed off the Cheyenne, who broke off contact and turned their attentions to the freight wagons off to the west. The teamsters circled the wagons and forted up. The Cheyenne eschewed a direct assault for a slow creep through the grass.

The attackers fired the grass and the wagons and their defenders were rubbed out. The Army reported 29 dead and many wounded. As is usually the case, it’s hard to pin down the casualties among the Indians. The Army claimed a body count of 60, but that is almost certainly a spurious number. George Bent, the remarkable half-Cheyenne Frontier Partisan who had survived Sand Creek was in the thick of the fight at Platte River Bridge. He said eight Indians were killed.

After the fight, the tribes splintered off and set about preparing for their fall buffalo hunt.

While the tribes had struck a bloody blow, the summer 1865 campaign was not decisive — or even particularly effective. The campaign had disrupted travel, but it had failed to push the Americans out of the country or to secure the hunting grounds of the Powder River. Given the massive force Red Cloud and others were able to assemble, the results were pretty weak.

Still, the tribes retained a strategic advantage. A U.S. Army punitive expedition sent out onto the plains in the late summer and early fall was a failure; the Indians mostly avoided contact and let the troops wear themselves out. And, with a massive post-Civil War downsizing underway, and Reconstruction in the South topping the list of strategic priorities, the U.S. Government couldn’t afford a full-scale Indian war.

So they decided to try to buy the Indians off. A great council was called for June 1866 at Fort Laramie. No white man wanted to try to take the invitation to Red Cloud, so some Laramie Loafers went out to persuade the war leader to come in and hear what the white men had to say — and see what kind of presents were on offer. Red Cloud agreed to come. He would listen — but he also had a thing or two to say…

* Platte Bridge Station would be renamed Fort Caspar in honor of the brave young lieutenant. Eventually, a city would rise nearby. A vowel slipped and it would become Casper, Wyoming.

Here’s a little more detail on the Battle of Platte River Bridge: