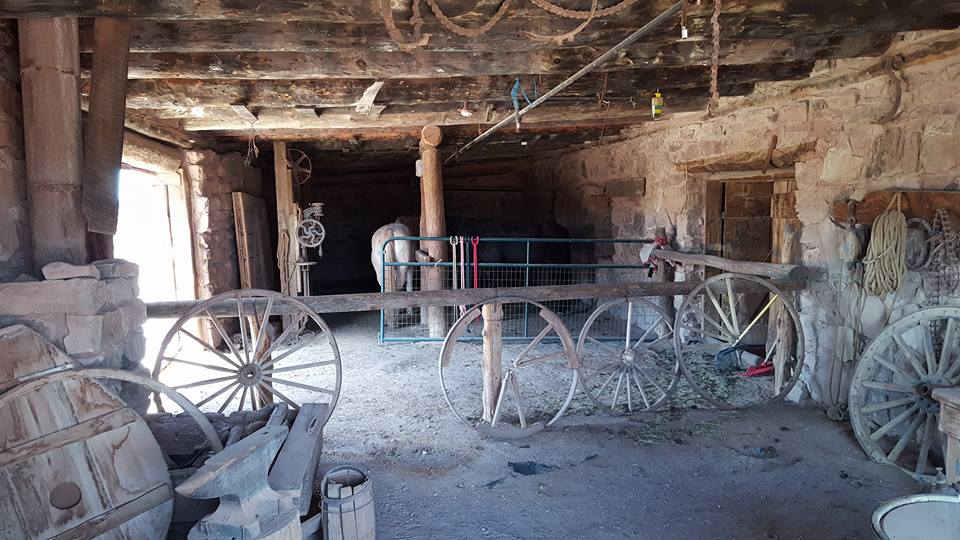 The stables at Hubbell’s Trading Post. photo by Rick Schwertfeger

Kit Carson, The Long Walk, Skin Walkers, The Navajo Witch Purge, alcohol. What do they have to do with this exceedingly pleasant place on a hot day in May?

Kit Carson. It is said that the mere mention of his name can elicit a curse on the streets of Gallup, New Mexico. In 1863-64 U.S. cavalry troopers under Carson invaded Canyon de Chelly and drove the Dine/Navajos out. The soldiers then led survivors on The Long Walk from their northeastern Arizona homelands to imprisonment at Bosque Redondo outside Ft. Sumner, New Mexico.

The controversies around Carson’s role in these actions are many. Tom Dunlay presents a nuanced, even positive view in Kit Carson & the Indians. Regardless, Carson got saddled with condemnation for his role.

In 1868 the U.S. government released surviving Dine/Navajo from Bosque Redondo to return to their ancestral homelands.

“They returned to destroyed homesteads – hogans, herds, and crops gone. Because of this devastation, trading for food and products became important.” (NPS)

New Mexican Juan Lorenzo Hubble and his brother Charlie had begun trading in the area. Then in 1878 up to 40 suspected witches — “Skin Walkers” — were murdered during the Navajo Witch Purge. One of them was killed “right on the doorstep of Charlie Hubbell’s trading post” near Ganado Lake, Arizona. J.L. Hubbell, “knowing that the Navajo would never again enter that building,” “bought a cluster of adobe buildings” from one William Leonard to develop into a new trading post.

The Hubbell Trading Post opened in 1883, and remains open for business to this very day — as well as having been named a National Historic Site by the National Park Service. And that is the peaceful, pleasant, and interesting place two miles outside Ganado, Arizona, that I visited. 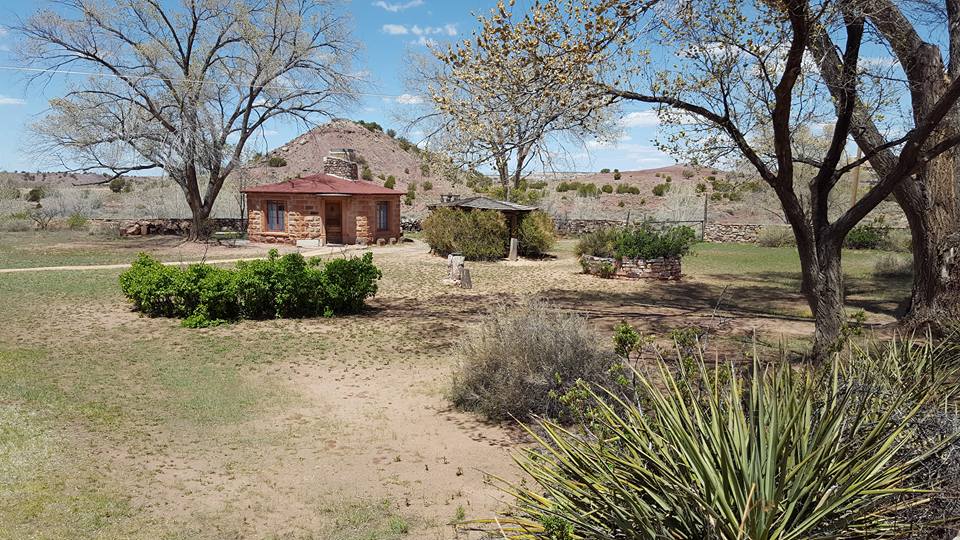 From the late 1870s to 1930 J.L. “Hubbell traded in Navajo country. Sentiment about him varied. Euro-Americans viewed him as the dean of Indian traders in the Southwest. Some Navajo customers said it was good to have trader Hubbell as a friend, while others said Navajos did everything around his trading ranch for low wages.” (MB)

In Hubbell can be seen virtually all of the threads of Southwestern American history and cultures during his time. He was a mixture of Spanish colonist ancestry dating back to the late 17th century on his mother’s side, and his father’s 19th century Yankee characteristics, brought with him during the Mexican-American War (1846-48).

“The two cultures melded in Hubbell. Much of his life was dominated by common Hispanic practices: social position and responsibilities inherent to landowner status, and the maintenance of a dependent and supportive family and community. These mixed with Yankee business ethics, aggression, and his effort to live up to the particularly American myth of the self-made man.” (MB)

Juan L. Hubbell and his life make this student of American Civilization giddy with interest. Little did I know when entering the cool interior of Hubbell Trading Post that I’d begun exposure to a complex man and an extraordinary symbol of the Southwest of his time. Biographer Martha Best calls his life “a story with multiple layers of reality.”

“He turned 160 acres of land into an entrepreneurial base with tentacles over, through, and past Navajo and Hopi country.”

He developed 26 trading posts during his lifetime, plus “scores of other businesses, ranging from a saloon/billiard hall to stage/freight lines. He personally influenced a native economy on the Navajo and Hopi reservations for over fifty years.” Hubbell’s annual Navajo rug sales often exceeded $40,000.

“He was trustworthy, old-fashioned, and a believer in American myths.”

BUT, viewed from another hilltop:

“He was a lady’s man, a gambler, a power monger, a resource extractor and exploiter, a federal bounty recipient, and a sometime toady. He grabbed land and water use by fusing his aims with those of the Indians and minimizing his direct benefit. And he believed in Euro-American superiority over Indians.”

Martha Best calls her book “an ethnobiography — a complex portrait of an era as exemplified in the life of one man.”

Hubbell connected himself to important people, and “reveled as a raconteur and the most interesting actor in his own Wild West stories.” A great example is his relationship with core Frontier Partisan Theodore Roosevelt. They were acquainted over many years without having met. Then in 1913 Colonel Roosevelt, facilitated by Hubbell’s influence, went to Arizona to see the Snake Dance. Hubbell also attended. They then traveled in Hubbell’s wagons to the Trading Post ranch for an overnight visit.

Both Republicans, these strong personalities discussed political disagreements —especially Hubbell’s anger over T.R. splitting the Republican vote by running as the Bull Moose candidate in 1912.

“J.L.’s grandson Hubbell Parker remembered the ex-president and the trader arguing ‘like they were mad at each other. It was very vociferous. But they were just good friends. They’d cooled off by the next morning. You’d never know they’d had an argument.’”

In typical Hubbell fashion, afterwards Hubbell used to say that Roosevelt had visited for a week. (EC)

Oh, about the alcohol mentioned at the beginning. Charlie Hubbell liked a toot or three or more. This displeased J.L., who exiled Charlie to run the Cedar Springs Trading Post on the reservation. On a night one hundred years ago, March 21, 1919, two Navajo men robbed the store, killed Charlie with shots to the head at close range, and burned down the building with Charlie’s body inside. Charlie was held in such high regard that Navajos Bohokishi Begay and Quinani applied their truly phenomenal tracking skills to run down and capture the murders at a hogan 80 miles north of the burned down trading post.

Charlie’s remains — just his torso — were buried in Winslow, Arizona.