The Robert E. Howard podcasters over at Rogues in the House scouted up a bit of Conan-related intel last week. They noted that the role-playing game creator Modipheus Entertainment has just released a new sourcebook titled Conan the Scout, taking the Cimmerian beyond the Black River for frontier adventures in the Pictish Wilderness. 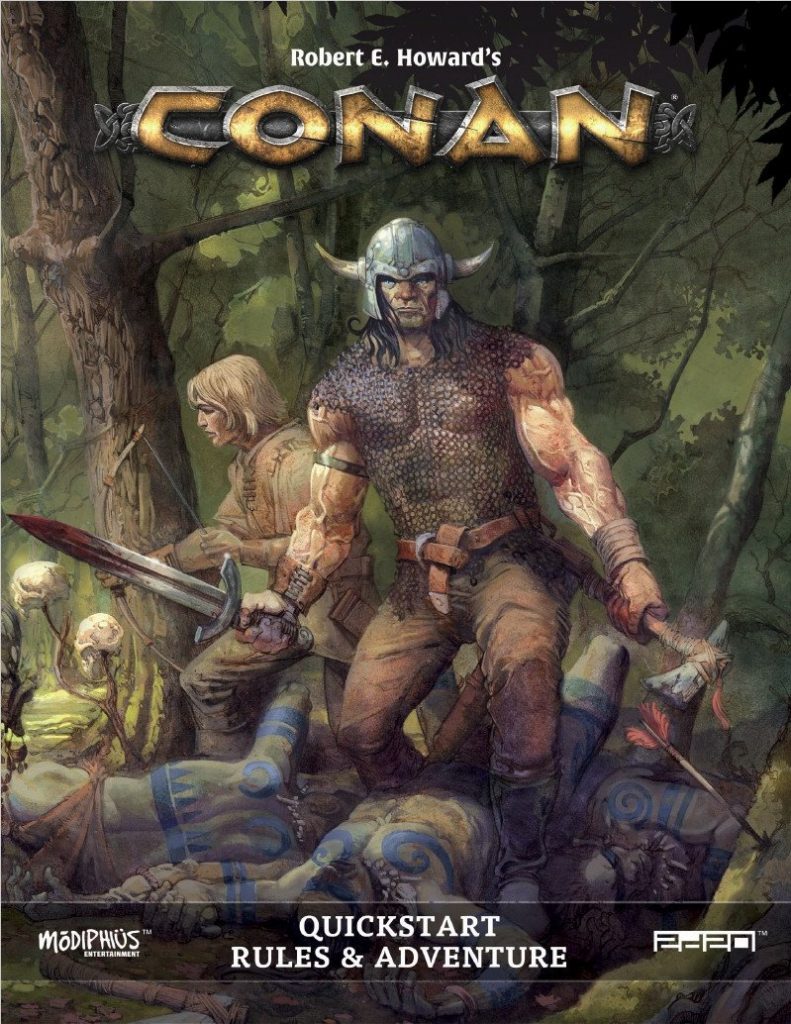 I am not a gamer of any kind, but I’m tempted to get the book simply for the sake of exploring its depiction (dePICTion?) of the Hyborian Age frontier setting. For, of course, Conan on the Frontier tripped my trigger from the moment at about age 13 I read the opening line:

“The stillness of the forest trail was so primeval that the tread of a soft-booted foot was a startling disturbance. At least it seemed so to the ears of the wayfarer, though he was moving along the path with the caution that must be practised by any man who ventures beyond Thunder River.”

While Howard’s tale Beyond the Black River — regarded as among his very best Conan yarns — clearly owes much in tone and setting to the New York frontier of the 18th Century (including place names) and to the frontier novels of Joseph Altsheler and Robert W. Chambers, Howard was clearly also channeling the history of his native Texas. Beyond the Black River was published in Weird Tales in May-June 1935, just a year before Howard’s suicide.

He told horror writer H.P. Lovecraft that he had deviated far from the usual formula for pulp acceptance with a new Conan yarn:

Howard longed to write substantially about his native region and its extraordinary history, and Beyond the Black River seemed to have felt like a step in that direction. He expressed to girlfriend Novalyne Price his excitement that Weird Tales editor Farnsworth Wright had accepted the story:

“I’m damned surprised he took it. It’s different from my other Conan yarns…no sex…only men fighting against the savagery and bestiality about to engulf them. I want you to read it when it comes out. It’s filled with the important little things of civilization, little things that make men think civilization’s worth living and dying for.”

Price recalled how important it was to REH that “it was about this country — and it sold!”

REH knew his frontiersmen. Simon Kenton and Lewis Wetzel are both mentioned in his letters, and either could have provided inspiration for Conan. But there can be no doubt that a certain Texas Ranger was present when Conan strode fully formed out of Howard’s consciousness in 1932. Bigfoot Wallace was Robert E. Howard’s favorite frontiersman. He’s mentioned frequently in Howard’s letters, and his powerful physique and adventurous life clearly inspired REH in his creation of the mighty Cimmerian.

“Have you heard of Bigfoot Wallace? When you come to the Southwest you will hear much of him, and I’ll show you his picture, painted full length, hanging on the south wall of the Alamo — a tall, rangy man in buckskins, with rifle and bowie, and with the features of an early American statesman or general. Direct descendant of William Wallace of Scotland, he was Virginia-born and came to Texas in 1836 to avenge his cousin and his brother, who fell at La Bahia with Fannin. He was at the Salado, he marched on the Mier Expedition and drew a white bean; he was at Monterrey. He is perhaps the greatest figure in Southwestern legendry. Hundreds of tales — a regular myth-cycle — have grown up around him. But his life needs no myths to ring with breath-taking adventure and heroism.” 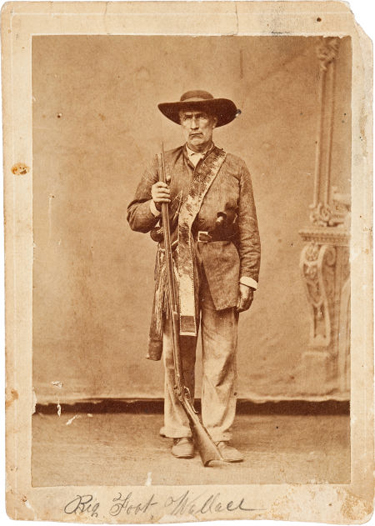 It is, in fact, almost impossible to separate fact and legend in the life of Bigfoot Wallace. In the finest tradition of the American frontiersman, he wasn’t above stretching the blanket for the sake of a good yarn, and his biographers weren’t too concerned about keeping all the threads separate. 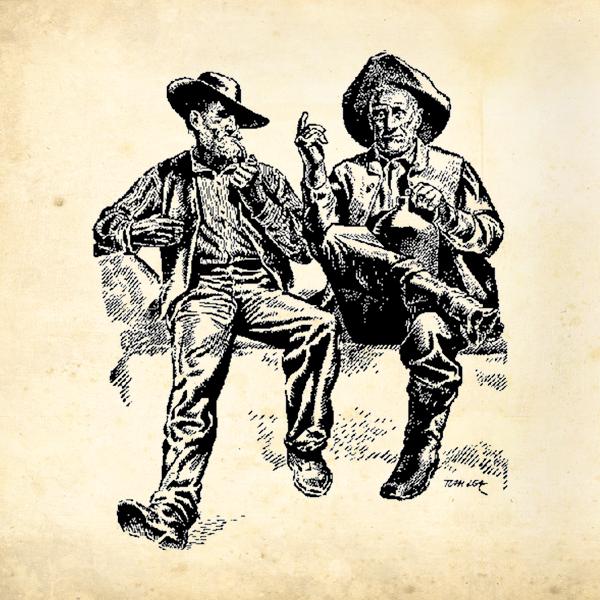 Howard’s description of his career is accurate enough. He was, for certain, a survivor of the ill-fated Mier Expedition. In retaliation for two powerful incursions by Mexican troops in 1842, the fledgling republic sent out a thoroughly disorganized punitive expedition. Many of the filibusters were captured, and General Santa Anna — still smarting from his humiliation in the 1836 Texas Revolution — wanted to execute the lot of them as pirates. He was persuaded, instead, to have them decimated. In the Roman sense. As in one-in-ten being killed. The men drew from a jar containing black beans and white beans. Drawing the black bean meant being stood up against a wall and shot. Wallace noted that the black beans were poured into the jar on top of the white beans, so he dug deep and came up good. He eventually escaped captivity and returned to Texas, where he would resume a career dedicated to fighting Indians and Mexicans, hunting, and yarnin’ about it.

Frederick Remington dramatized the moment when Bigfoot dug in. 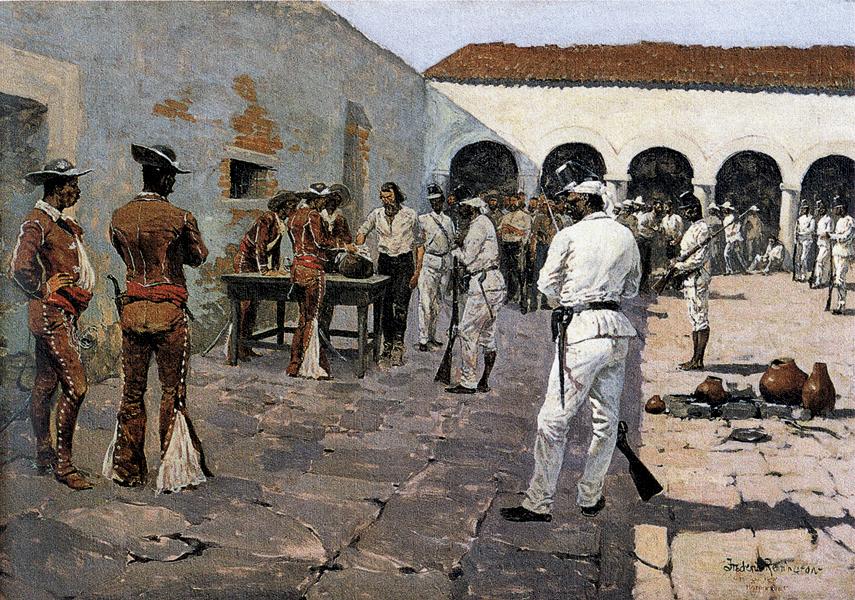 Like the Cimmerian, Wallace was a giant of a man — 6’2″ in height and weighing in at some 240 pounds. That’s a big dude even now; in the mid-19th century, he loomed a head taller than average and had a good 80 pounds or more on just about everyone. The photograph above shows that the field gear of a frontiersman had stayed pretty consistent for the past 100 years, from the Appalachians west to the prairies of Tejas. The long rifle was still the weapon of choice, even into the 1860s, though the ignition had changed from flintlock to the more reliable percussion cap. The revolver in his belt was something new — and something of a game changer in the hands of Texas Rangers.Wallace’s roundhat could have easily adorned Daniel Boone, and the plain hunting frock would not have been out of place in Kaintuck in 1775. His shoes look no different from a good pair of South African veldskoen.

Such things please me…

Speaking of spinning yarns… If you are at all interested in Wallace and the early Texas Republic, dig into the five-part series on the Texas Rangers at Legends of the West. And may the bean you draw be a white one.

You can give a listen to Beyond the Black River here: