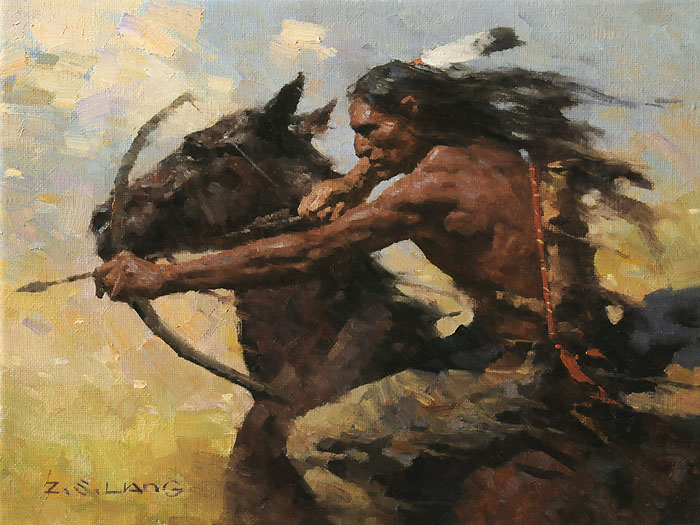 Having run off down a sidetrail into the Bozeman Trail War — thanks to my fortuitous encounter with the ghosts of Captain William Fetterman’s command and the spirits of Crazy Horse and Jim Bridger — I am, of late, blessed with extraordinarily vivid dreams of the Riders of the High Plains. These are fed by the magnificent images rendered by artists like Howard Terpning, ZS Lang, and James Ayers.

I am eagerly awaiting the arrival of a compendium of native accounts of the Fetterman Fight, along with a couple of historical novels and a couple volumes of recent scholarship on the event, which upend some long-standing myths about Fort Phil Kearney and the “massacre” of 79 soldiers and two civilians on December 21, 1866.

It is my goal to depict the actions and the actors as vividly and as accurately as possible. That requires depicting the Lakota, Cheyenne and Arapaho who overwhelmed Fetterman’s command as they truly were, not in a fetishized manner that seeks to create a fantasy version of an ecological earth-spirit. I addressed this topic before in my post “Crazy Horse Was Not A Wood Elf,” and I don’t think I can state it more plainly than I did there:

Treating a man like Tasunka Witko as though he was some kind of fantastical creature upon whom one can project all sorts of fantasies of ecological and spiritual connectedness is, to my way of thinking, grotesquely patronizing. The free Lakota of the era were extraordinarily connected to the landscape and to the horse that was the center of their culture — but these were learned qualities, not some sort of supernatural power assigned by a cosmic D&D Dungeon Master.

They were a very political people, riven by internecine rivalries. They were major players in a complex economic system, deeply enmeshed in the snares of commerce. They were well armed with the latest weaponry — and dependent on trade for ammunition. They were imperial, pushing others native peoples off of desirable lands and defining their worth and their very being in the heroic style of a warrior nation. In fact, their inter-tribal rivalry with the Crow remained more important to them than resistance to the encroaching whites — all the way to the end of their days of freedom.

In short, they were a rich, vibrant, complex and variegated culture under tremendous pressure from a tectonic shift in the turnings of the world.

In the wake of the fraught commentary around Greg Walker’s expose on the El Mozote Massacre, I would be remiss if I did not address forthrightly the cruelty and barbarism of Plains Indian warfare. As noted in the post on Red Cloud, it must be understood that what we (and Western culture of the era) perceived as abysmal savagery was exemplary behavior in Lakota (and other Plains Indian) culture. That matters. But the actions are the actions — and if I am making any special pleading it is this: A deeper understanding of what happened and why demands that we don’t flinch when confronted with horrors, and that we don’t pretend that they don’t exist so that we can construct a fantasy creature out of flesh-and-blood men.

Yes, I dream of Sioux and Cheyenne warriors riding like the wind across the prairie, and the dreams are compelling and beautiful. So far, I have not dreamed of a bagful of severed hands of children…

In his masterful book The Killing of Crazy Horse, Thomas Powers describes what troopers and Indian scouts discovered in a Cheyenne village that they captured and destroyed after the Battle of the Little Big Horn:

“Some grisly discoveries helped to explain the drumming singing heard by the soldiers before the fight began. Billy Garnett, Lieutenant Bourke, Jerry Roche and others reported that some saddles found in the village were recognized by Shoshone scouts as those of friends. Fresh scalps were hanging from lodgepoles. With the discovery of the saddles and the scalps, the Shoshone scouts began to cry openly as they moved about the village. Baptiste Pourier in going through lodges also found two necklaces made of human fingers; one was buried that night, the other given to Lieutenant Bourke. Finally, a buckskin bag was opened. Within were the right hands of a dozen Indian children, all members of a band of thirty Shoshones out hunting which had been surprised and rubbed out by the Cheyenne only a few days earlier. The bag was given to the Shoshone.” 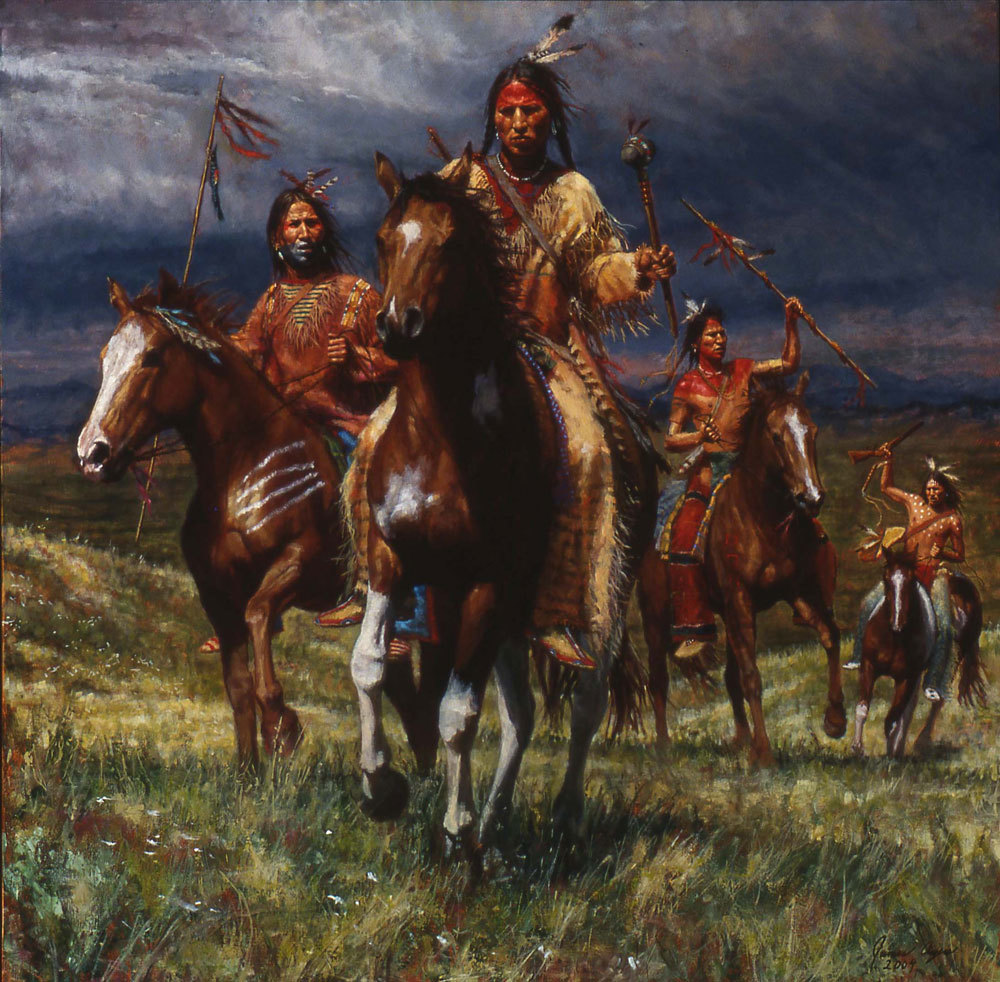 “The 19th Century Lakotas were as ethnocentric a people as ever walked the earth, assured of their centrality in a world that was about to be transformed beyond recognition. Crazy Horse inherited their sense of exclusiveness, and his adult life was devoted to fighting the enemies of his people. We should not mistake that fight for some high-stakes game or noble martial art: exciting, full of dash and color, it was also a deadly  arena in which Crazy Horse, like his peers, killed men and women and routinely mutilated the dead.”

The Lakota were an imperial people just hitting the apogee of their power and prestige in the mid-19th Century, when they began to collide with the expanding might and ambition of another imperial people — the Americans. It is important to recognize that the Powder River country that is the locus of the tale we are about to unfold was a dark and bloody ground well before the Bozeman Trail War of 1866-68. It was NOT the ancient hunting grounds of the Lakota. The land had until recently been Absaroka, Land of the Crows — a territorial designation codified in the Treaty of Fort Laramie in 1851. The Lakota had been encroaching in force upon their old enemy, and in about 1857 they finally succeeded in pushing them out of this well-watered, expansive buffalo range.

The Lakota’s argument before the bar of history is “we stole it first.”

I fear that the foregoing reads like an indictment of the Lakota and their allies, the Northern Cheyenne. That is not my intent. On the contrary, I have, since boyhood, been drawn strongly to the barbaric splendor of their way of life in their days of glory. War and raids for horseflesh; spiritual and material preparation for war and raids on horseflesh; lounging and smoking and singing songs and telling stories of war and raids for horseflesh. Almost nothing done that we would consider “work.” Sure, the life was punctuated with periods of extreme privation, and making enemies out of just about everyone made it exceedingly insecure. Loss and personal tragedy and trauma were rife. But it was barbarian life lived to its fullest — and those of you who are regular readers of Frontier Partisans and Running Iron Report know excactly what that means here. 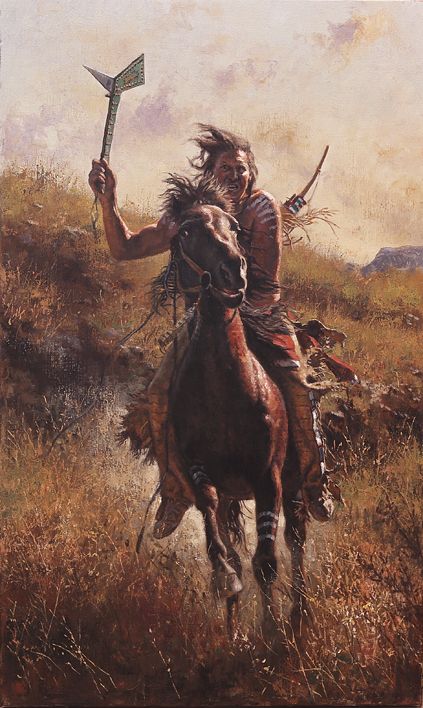 Reader Felonious Monk sent up a smoke signal about this:

Pekka Hämäläinen, one of the leading lights in “borderland history,” and the author of The Comanche Empire has turned his attention to the great imperial rise of the Lakota. It comes out in October, which is making me gnash my teeth because dammit I need it now!

This first complete account of the Lakota Indians traces their rich and often surprising history from the early sixteenth to the early twenty-first century. Pekka Hämäläinen explores the Lakotas’ roots as marginal hunter-gatherers and reveals how they reinvented themselves twice: first as a river people who dominated the Missouri Valley, America’s great commercial artery, and then—in what was America’s first sweeping westward expansion—as a horse people who ruled supreme on the vast high plains.

The Lakotas are imprinted in American historical memory. Red Cloud, Crazy Horse, and Sitting Bull are iconic figures in the American imagination, but in this groundbreaking book they emerge as something different: the architects of Lakota America, an expansive and enduring Indigenous regime that commanded human fates in the North American interior for generations. Hämäläinen’s deeply researched and engagingly written history places the Lakotas at the center of American history, and the results are revelatory. 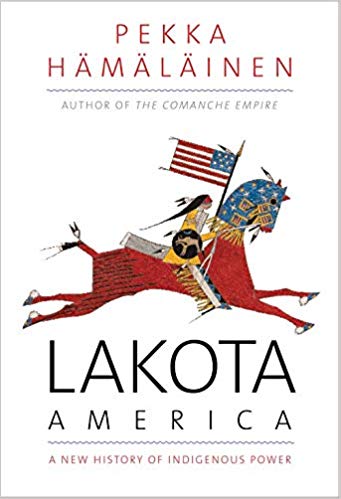