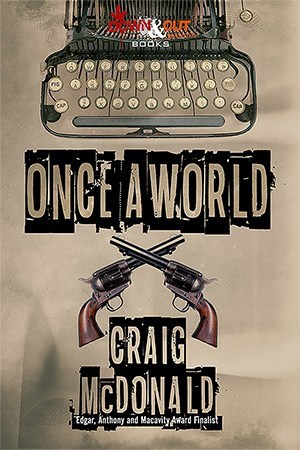 Summer of 2019 was already shaping up pretty damn good in the world of Frontier Partisans literature and cinema, what with a Deadwood movie, the return of Yellowstone and a mountain of research books to read. But this piece of news blows the whole thing up: Craig McDonald’s tale of Hector Lassiter and the Punitive Expedition is hitting the streets in July.

Welcome to America, circa 1916-1918, and two of the bloodiest conflicts that starkly defined an era.

Teenage Hector Lassiter, an aspiring author inspired by propaganda and a siren’s song of throbbing war drums, lies about his age, mounts a horse, and storms across the Mexican border behind General “Black Jack” Pershing and George S. Patton to bring the terrorist and Revolutionary General Pancho Villa to justice.

Soon, the still underage Hector is shipped off to the bloody trenches of France, fighting the so-called “War to End All Wars” where he meets fellow novelists-in-waiting, John Dos Passos and Ernest Hemingway.

Once A World is a love story at once epic and intimate; a portrait of the artist, and his country of birth, at a defining moment in their storied history.

Pre-order from Down & Out Books.

Craig’s first Hector Lassiter novel Head Games exploded on me like a hand grenade back in 2014.

What a hoot. McDonald is in love with the same kind of pulpy goodness that trips my trigger and he put together a wild-and-wooly, lurid trip through 1957 America with a soundtrack by Tom Russell.

Orson Welles, Marlene Dietrich, the ghosts of the Mexican Revolution… What’s not to love?

That caper was made into a graphic novel. There’s a whole decade’s worth of Hector Lassiter novels, that run us from Key West to Hollyweird, from Papa’s Idaho to wartime Europe.

Sometime in July when you hear gunshots and the cry: Tonight we ride, you bastards! just carry on. It’s just me and Hector saddling up again…