George Rogers Clark’s March to Vincennes (in modern Indiana) stands as one of the great epics of the Ranging Way of War. With 170 light infantry and no artillery, he set out to recapture Fort Sackville from British Lt. Governor Henry Hamilton, who not only held a fortified position but also outnumbered Clark’s force with a garrison of British Regulars, Canadian Loyalist militia and Indians. But Clark, a frontiersman and a fighting man to his core, understood the concept that underpins the archetypal modern special operations force, the British Special Air Service (SAS): Who Dares Wins. 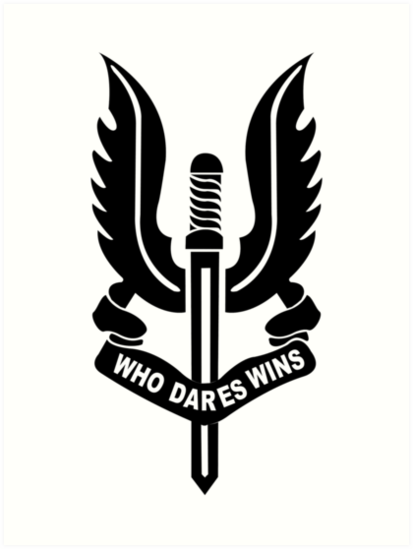 George Rogers Clark lived by this motto long before it adorned the badges of the SAS.

Conditions were horrible. Melting snows turned the prairies to mud, and rivers were out of their banks. For 12 days, Clark’s men — a mixed force of his Illinois Regiment frontiersmen and Cahokia and Kaskaskia militia slogged eastward through mud and icy water, focused only on making it from hillock to hillock where they could grab a little rest. Their food supplies ran low and they marched hungry, wet and exhausted.

As always, Clark knew how to move men. When his force was near exhaustion and demoralized by the strains of a terrible march, facing the deep waters of the flooded Embarrass River, Clark stepped to the fore, smeared his face with a paste of black powder like an Indian warrior’s paint, gave out a shrill war cry and plunged into the waters. As always, the men followed him.

Worn to the nub, Clark’s tiny force hit Vincennes on February 23. Clark fired on Fort Sackville that night and the next morning boldly demanded Hamilton’s surrender. The Hair Buyer refused. The Americans peppered the fort with hot fire, using powder purchased from French inhabitants of the town, since their own had been damaged traversing the flooded plain. The American sharpshooters made life most stressful for the British, firing with the unnerving accuracy of the American rifleman through loopholes in the fort’s stockade. 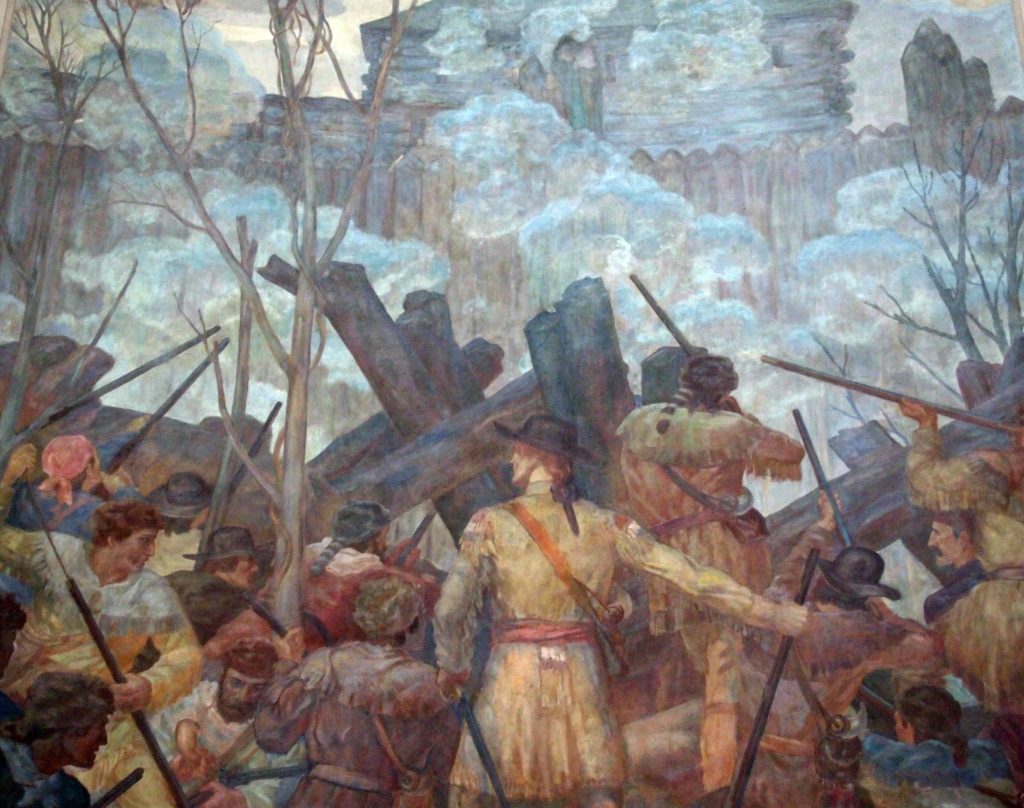 Later that day, Clark got a fortuitous chance to exercise the theatrical psychological warfare of which he was such a master. This time, it would be brutal. A war party of Indians and French partisans (loyal to the British, or just opportunistic) returned to Vincennes from a raid on Kentucky, whooping and firing their muskets in the air, escorting a bedraggled party of prisoners  and waving their trophy scalps. They had no idea that Fort Sackville was under siege. Clark detailed a squad to ambush the raiders and rescue the prisoners. The ambush was successful; the prisoners were liberated and several raiders were killed. Six were made prisoner.

Clark had them escorted into view of the Fort Sackville garrison and forced to their knees. As he would recall it:

“I now had a fair opportunity of making an impression.”

Clark meant to make his impression by executing the captured raiders. In an example of the very small world that made up the Frontier Partisan theater of war, one of Clark’s militiamen recognized a warrior as the son of the Odawa Pontiac, who had saved his life back in the old war of 1763. He begged Clark to spare the man, and the colonel did as he bade. Then a Cahokia militiaman recognized his son among the captives. Clark spared him as well.

Accounts vary as to who wielded the tomahawk, but a Canadian militia captain claimed that it was Clark himself. I believe that it was. The Virginian slammed his tomahawk  into the skulls of each warrior in turn, as one of the Odawa warriors chanted his death song. Then, the militia captain recalls, Clark dipped his hands into the blood of his victims..

“…rubbing it several times on his cheeks, yelping as a savage.”

Clark shouted that Hamilton had better hear his terms. The threat was implicit: The Hair Buyer could submit and be made a prisoner or end up under the Virginian’s tomahawk. The British commander caved. The next day, he became a prisoner and Clark’s tattered force occupied Fort Sackville.

The Virginian conqueror ardently desired to follow up on his victory with an expedition to seize Detroit — always the brass ring that tantalized him. It just wasn’t in the cards. With enlistments running out, he would have had to raise a regiment almost from scratch. And the demands of administering territory and defending Kentucky were increasing. Detroit would have to wait. 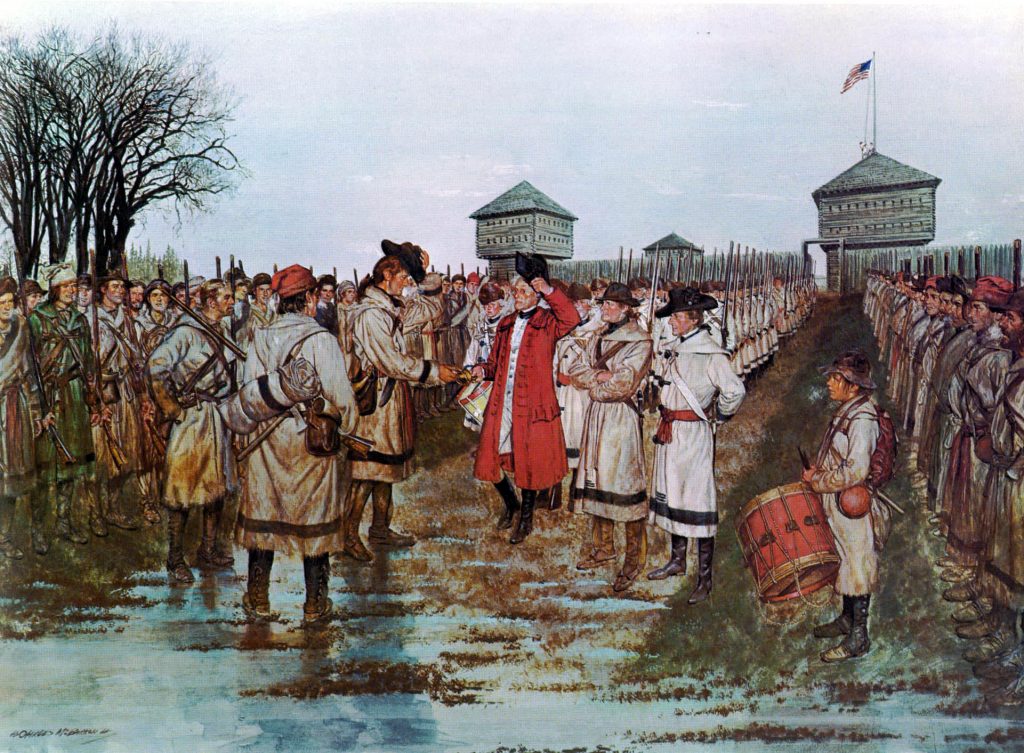 Hamilton surrenders to Clark. The Virginian’s display of savagery must have chilled the British commander, who knew how much the Long Knives hated him for instigating raids on the Kentucky settlements. Hamilton was sent in chains to Williamsburg, Virginia.

The capture of Vincennes was the pinnacle of Col. George Rogers Clark’s career. He was 26 years old. He had met and overcome every challenge and executed a strategic plan that projected American force to the Mississippi River and deep into the Illinois interior, through a mixture of tactical mastery, brazen and sometimes lurid theater, and a keen grasp of human psychology. Everything after this would be harder.

Having secured the Illinois country, Clark returned to the Ohio to organize the defense of the Kentucky settlements, which were under pressure every bit as intense as it had been in 1777. The first stirrings of troubles that would topple Clark from his pedestal rippled through Kentucky. Many settlers and militia leaders resented Clark’s focus on the Illinois Country and the Falls of the Ohio when the direct threat to the settlements was infiltration across the upper Ohio River. And the colonel was slowly sinking into a mire of sketchy bookkeeping and resistance to reimbursement for vast expenditures on behalf of a bankrupt state of Virginia.

But there was still a dram or two of the Clark magic in the bottle. In August of 1780, he led a punitive expedition to destroy the Shawnee town of Peckuwe (Piqua) deep in the Ohio country. The expedition was manned by a who’s who of the great Frontier Partisans of the era: Boone was along; Simon Kenton was Chief of Scouts, among whom was a young Bland Ballard. John Floyd, James Harrod  and Benjamin Logan commanded militia elements. William Whitley was among the fighting men. Clark had a six-pounder field piece and a capable artillery  crew to man it. It was probably the strongest and best fighting force Clark ever commanded.

The high-risk expedition was bold in its conception; many such campaigns in these years ended in catastrophic defeat and slaughter. Clark was coldly cautious in its execution, using his scouts to scry out potential ambush sites and going into fortified camps each night. The battle at the town of Peckuwe was hard-fought and the Shawnee and their allies were routed. It was one of the few clear-cut victories the American frontiersmen could claim in the Revolutionary War.

The victory came with a dose of personal tragedy. Clark’s younger cousin, Joseph Rogers — who had  accompanied Clark to Kentucky and was captured by Shawnee in 1777 — was gunned down when he ran toward the Americans bidding them to cease fire. Summoned to the scene, Clark regarded the mortally Rogers rather coldly:

“(He) rode up & remarked he was sorry to see him that situation & expressed the opinion that as he knew that the army was coming in time to have escaped & joined his countrymen, he shd have done it.”

Whatever success punitive expeditions could achieve, Clark well understood that the only way to decisively win the war in the West was to capture Detroit, which would cut off the Indians supply and deny the enemy their base of operations. Clark again went east to pitch a plan to take Detroit to his friend and strongest political backer, now-governor of Virginia Thomas Jefferson. While in the east, Clark demonstrated that he could fight with the best that that theater of war could field. In January 1781, he tangled with Col. Simcoe of the Queens Rangers (portrayed as a psychopathic villain in the historically-challenged-but-nevertheless-compelling AMC drama Turn). Clark badly mauled the British command.

Promoted to Brigadier General and given license to recruit yet another army — of 2,000 men(!) —  to march on Detroit, Clark headed to Fort Pitt — where everything started to go to shit. Recruitment was dismal, thanks in part to jealous resistance from other commanders, and Clark set out down the Ohio with a small command with a follow-on force led by Pennsylvania militia colonel Archibald Lochry days behind him. Lochry would lead his command into catastrophe and lose his own life under the tomahawk.

A strong and capable force of Indians captured all of Lochry’s command and so badly disrupted Clark’s supply that he was forced to scrub the mission to Detroit. He would never get another chance.

In August 1782, a raiding force of Indians and British Rangers crossed the Ohio and laid siege to Bryan’s Station in north-central Kentucky. As a relief force approached, the British and Indian raiders broke off the siege and retreated. The Kentucky militia followed precipitously — and walked into a savage ambush at Blue Licks. More than a third of the command — 70 Kentuckians — were cut down in minutes.

Clark was down at the Falls of the Ohio, completely out of the game — and Kentucky never forgave him for it. As his biographer William R. Nester puts it:

“The Clark magic with most settlers would vanish in the smoke of burned cabins, bodies and gunpowder.”

Rumors and recriminations flew. Clark was derelict in his duties. He was a drunk. Barely 30 years old, Clark’s glory days had suddenly passed him by. From here, the battles of the Long Knife would be mostly with a feckless and ungrateful government of Virginia — and with himself.