This is  Rick Schwertfeger’s seventh article on backcountry, irregular and militia partisans in the American Revolution.

As 5,000 British Redcoats marched down Schraalenburgh’s New Bridge Road on November 21, 1776, a day behind the retreating, disheveled American Continental Army, “Tory Dutchmen came forward by the hundreds, many wearing the green uniforms of British Provincial troops, in which they had recently enlisted.” Yet historian Adrian Leiby noted that “at least half of the people of Schraalenburgh and the Hackensack Valley, though within the British lines, stood boldly for the American cause.”

Within days Tories attacked homes of prominent Schraalenburgh Patriots, followed by back and forth reprisals over several weeks. In December the British Army established winter quarters at the edge of town. 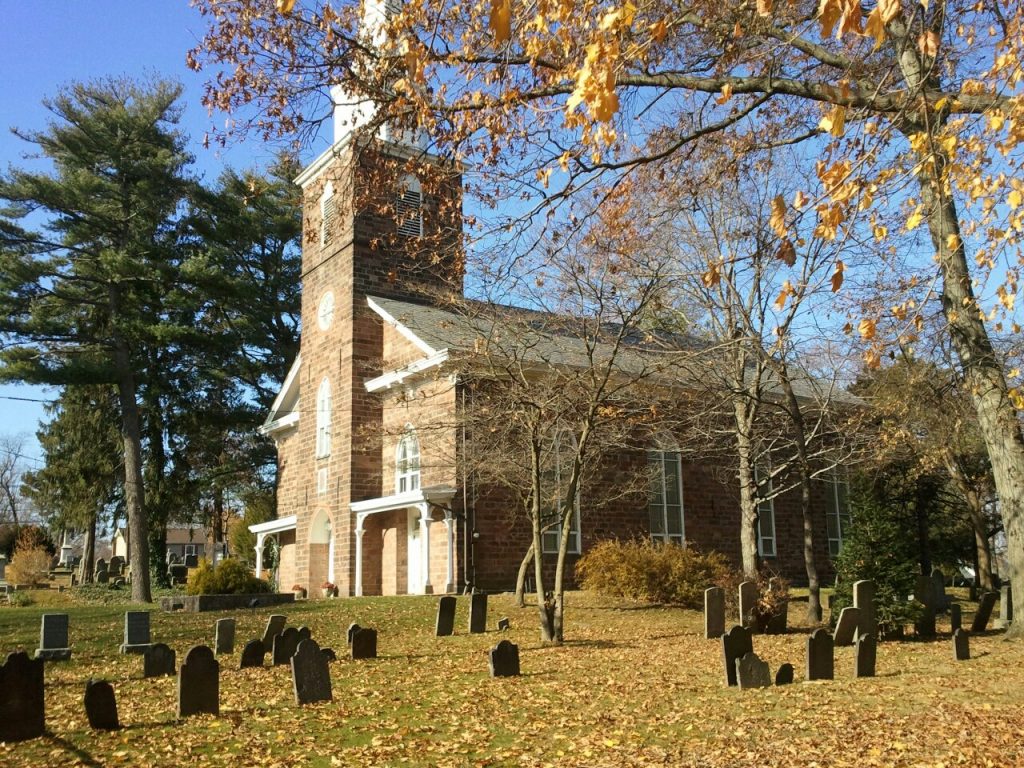 The author’s photo of Old South Church in Bergenfield, NJ.

Thus my northern New Jersey hometown of Bergenfield — then called Schraalenburgh — became a center of the Loyalist–Patriot “civil war” during the American Revolution. Its Dutch Huguenot settlers followed the Dutch Reformed religion; and had memories of themselves or their elders fleeing Europe from religious oppression. As changing European alliances impacted the American colonies during the 17th century, these passionate colonials were strongly anti-Tory. Then the 18th century Great Awakening – “a reaction of practical faith against barren orthodoxy… furnished the zeal and fervor for progress which brought on the American Revolution.” Many members of the church in Schraalenburgh embraced the new religious views. Others felt robbed of their religion.

“The ensuing bitter and divisive conflict” led to the establishment of a traditional Dutch church in northern Schraalenburgh. And the acrimonious split spread beyond religion, becoming “the division between patriot and Tory in the far greater conflict to come.”

Schraalenburgh’s split serves as one example of why New Jerseyans were so divided as the Revolution exploded. More generally, a paradox existed: British colonials had the constitutional rights of Englishmen, but their colonies were subservient to the Mother Country. Increasingly, many colonials became restive under the chains of empire. Those wishing to break free called themselves Patriots; and much is known about their motivations and how they won the War.

The reasons for Loyalist allegiance to Britain run the gamut. Some were loyal British citizens. Whatever their dissatisfactions with how the colonies were treated, rebellion was unconscionable. Some had experienced commercial, financial, and/or political success in America, and aimed to protect their wealth and positions. Interestingly, some quite agreed with the dissatisfactions of the rebels, but advocated negotiation. As revolutionary fervor increased, the position of many Loyalists became quite untenable. Labeled “Tories” by the Patriots, they became the enemy. Many prominent Loyalists fled the colonies for safety. Some returned to England. A large number fled to Canada.

But many Loyalists, such as those green-coated Provincials in Schraalenburgh, took to arms. The green coats joined the 3rd or 4th Battalions, New Jersey Volunteers, commissioned just five days before the British marched through Schraalenburgh. The 4th Battalion “participated in numerous raids in New Jersey in 1777,” raids on Staten Island, and “Lord Cornwallis’s Bergen County Grand Forage in 1778;” with more raiding in 1779 and 1780.

Eventually, nine Loyalist battalions were raised in New Jersey. Some mainly engaged in militia raiding. Others were attached to British Army units and fought in pitched battles. New Jersey militia even participated in the famous Battle of King’s Mountain as part of Patrick Ferguson’s American Volunteers! “A detachment of the 4th Battalion under Capt. Samuel Ryerson made up nearly one quarter of” Ferguson’s force. Detachments from the 1st and 2nd Battalions joined them.

But much of the fighting was New Jerseyan against New Jerseyan. Old religious animosities and local disputes frequently motivated colonials to the Loyalist side. The circumstances that created Loyalists often were less about ideology and more about material issues. There was payback over land disputes, and tenants settling scores with patriot landlords. For many colonials, loyalty to the Crown was secondary or irrelevant. Their strong emotions were enough for them to take up arms against Patriot enemies. 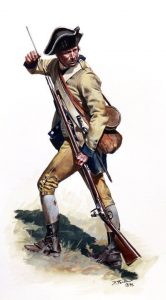 Much of the resulting fighting was by irregulars on both sides. For in January 1777 the British troops marched back to New York. “Schraalenburgh patriots were now in an abandoned country between two armies, a neutral ground which was too perilous for any but desperate men, bent on vengeance, gold or glory.” Tory raids were “of savage barbarity, bringing the horrors of war to defenseless inhabitants merely because they differ in sentiment.” “Hardly a patriot family in Schraalenburgh had not seen a son or father carried off to prison, many to die of starvation and exposure.” Local patriot militia leader Major John Mauritius Goetschius wrote in 1780 of his ”familie so distressed by the Burning of my house Barn and all my effects by the Enemie.” However, Goetschius, along with Captains James Christie and David Demarest, pursued the Patriot cause bravely and became distinguished militia officers. 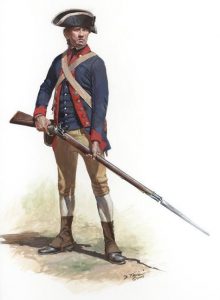 One young Schraalenburgh militiaman deserves noting: Peter Van Orden. Enlisting at age 14, he saw local action in 1777 and 1778. Then “he spent 1780 in the Mohawk Valley, fighting British Regulars and Brant’s Indian raiders.” Later, in the War of 1812 Van Orden rose in the militia to the rank of Major General.

Detailed presentation of marauding and plundering throughout New Jersey by irregulars, militias, British soldiers, and even Continental Army troops exceeds this article. But one event deserves highlighting. Further south lies Long Beach Island, an 18-mile-long barrier island with Barnegat Bay between it and the mainland. On October 25, 1782, a British vessel ran aground and was captured by Patriot militiamen under Captain Andrew Steelman. That night as the Patriots slept on the beach at the northern end of the island, Tory raiders under John Bacon launched a sneak attack and killed the sleeping Patriots. The Massacre at Long Beach has come to exemplify the savagery of the Patriot- Loyalist civil war in New Jersey during the American Revolution.