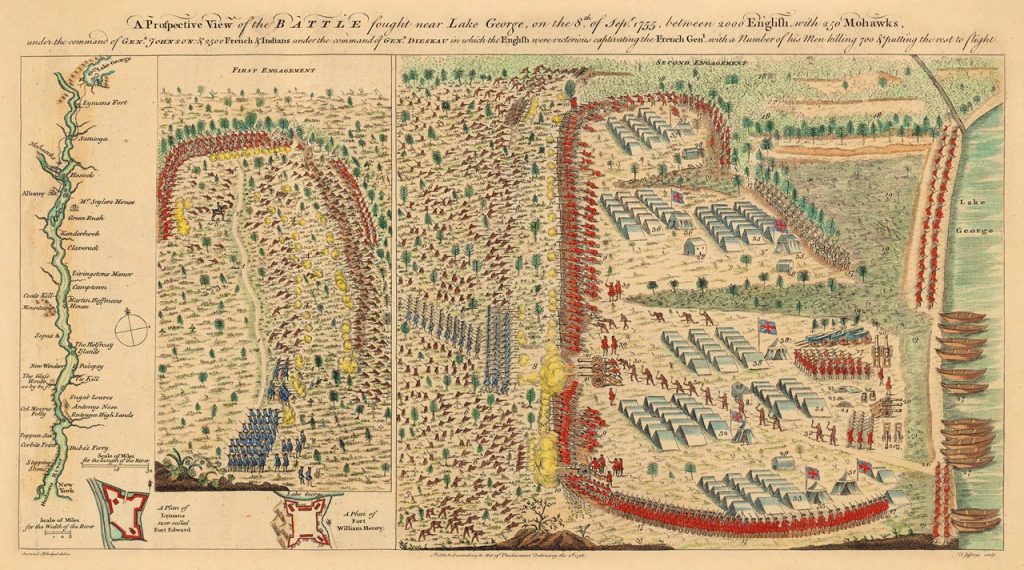 The Battle of Lake George, a contemporary depiction.

The battle that earned Sir William Johnson his Baronetcy and made his considerable fortune was a messy affair. The mission was to take control of Lake Champlain from French forces at Crown Point’s Fort Saint-Frédéric, under the command of Baron Ludwig August Dieskau. Johnson’s army was a motley collection of militia and Mohawk. The militiamen from New England were appalled by the rowdy and blasphemous yahoos from New York, and the New Yorkers found the neo-Puritan New Englanders insufferable. Both were leery of the Mohawk.

Johnson’s force established an encampment at the southern foot of Lake George, 14 miles north of the British Fort Edward, in August 1755. Dieskau moved on Fort Edward, but his Indian allies declined to assault the works there, so he turned north to take on Johnson’s force. Johnson sent out a detachment of Massachusetts men and Mohawks to aid Fort Edward, which ran into an ambush on September 8. Many of the French-allied Indians were also Mohawk who had earlier converted to Catholicism and migrated to Canada where the were known as Canawaughga Mohawk. The Bloody Morning Scout as it came to be called was a disaster for Johnson’s force. Some 80 were killed, including many of his Mohawk allies, who could scarcely afford the attrition. The Mohawk-on-Mohawk violence was also highly traumatic psychologically. 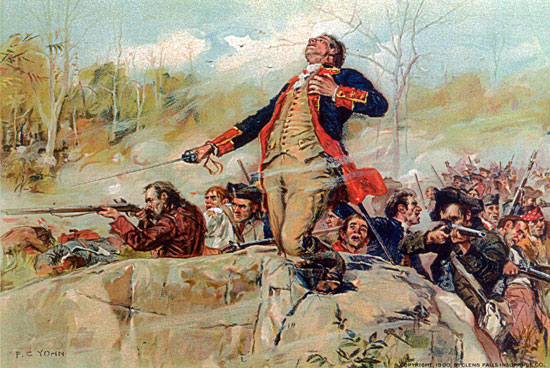 The death of Col. Ephraim Williams during the Bloody Morning Scout.

The survivors of the Bloody Morning Scout ran four miles back to Johnson’s encampment, which he had diligently been fortifying. Then it was Dieskau’s turn to walk into the kill zone. he attempted to assault the fortified camp and his men were mowed down in windrows. Dieskau was badly wounded and saved from battlefield execution by Johnson’s intervention. Johnson had taken a ball in the ass, and was knocked out of command involvement in the defense, which devolved to Connecticut militia General Phineas Lyman. 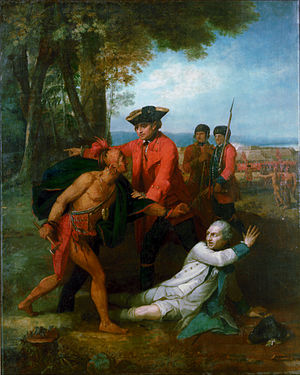 The commander at Fort Edward heard gunfire from the lake and saw smoke in the air and sent a well-armed party out to investigate. The militiamen came across a French baggage train, executed a successful ambush and slew a goodly number of Canadiens in an action at a spot known since as Bloody Pond.

It was all bloody, and a bloody mess at that. Each side had taken about 330 casualties. Johnson could not continue to his objective, but he held the field, which was enough for him to claim victory. The New Englanders, of course, were surly about this; they figured the credit should go to their man Lyman. There’s some justice in that, but it was Johnson’s army, and he made the key decision to fortify the camp, so I think he deserved his laurels. Besides, even being elevated to 1st Baronet couldn’t fix a musketball in the ass. (A £5,000 bounty, now… THAT is a fine balm; it works out to about $1 million in today’s money — a literal million-dollar wound). Though controversy dogged the outcome, in the wake of General Edward Braddock’s disastrous defeat on the Monongahela river in Western Pennsylvania earlier in the summer, the Battle of Lake George was trumpeted as a triumph of British Arms.

Johnson established Fort William Henry at the site of his encampment, and that became England’s northern frontier outpost. It would fall in 1757 in an incident made famous in The Last of the Mohicans.

Here’s a depiction of the events from the well-made doco The War That Made America.