Tim Murphy is a legend among riflemen — a Frontier Partisan sharpshooter who, deploying his long rifle on October 7, 1777, turned the tide of the American Revolution.

According to folklore that has accreted over a couple of centuries, Murphy — under direct orders from Colonel Daniel Morgan — climbed a tree during a heavy firefight at Bemis Heights (New York) and picked off British General Simon Fraser as he was rallying his troops at a critical moment in the Second Battle of Saratoga. Fraser’s death turned the tide of battle; the Americans soon took the surrender of General John Burgoyne; the French agreed to enter the war, an alliance that would, in 1781, prove decisive in winning American independence. You could argue that Tim Murphy’s shot won the American Revolution for the American Patriots.

Such is the folklore — a tale I cherished from the sixth grade on. There is, however, nothing that proves that Murphy actually fired that fatal shot. 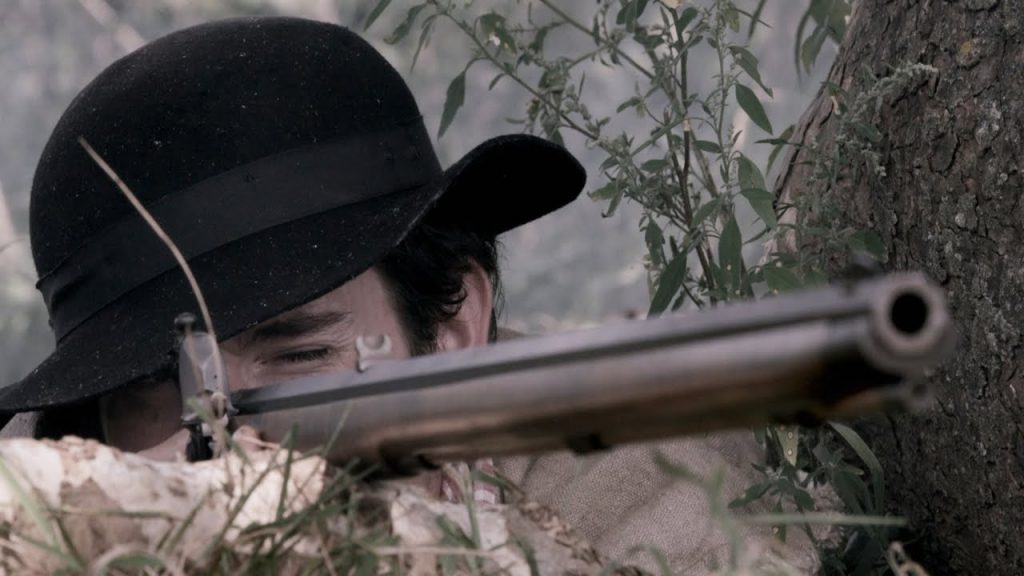 There is no argument over whether Murphy could have made the shot.

Tim Murphy was a badass. He was born in 1751 out of Irish heritage traced back to Donegal. At the outbreak of armed hostilities, he was living in the Wyoming Valley, bordering Seneca territory on the Pennsylvania frontier. He and his brother John enlisted in Captain John Lowdon’s Company of the Northumberland County Riflemen. The riflemen harried British pickets during the siege of Boston in 1775, got pushed off Long Island with the rest of George Washington’s army, and participated in the near-miraculous victories at Trenton and Princeton that kept Washington’s army alive at the end of 1776.

In July 1777, Murphy was one of 500 riflemen hand-picked by Col. Morgan to serve in a dedicated rifle corps in the campaign to stop General Burgoyne’s invasion of the colonies down the Hudson River from Canada.

“Chosen men, selected from the army at large, well acquainted with the use of rifles, and with that mode of fighting which is necessary to make them a good counterpoise to the Indian.” 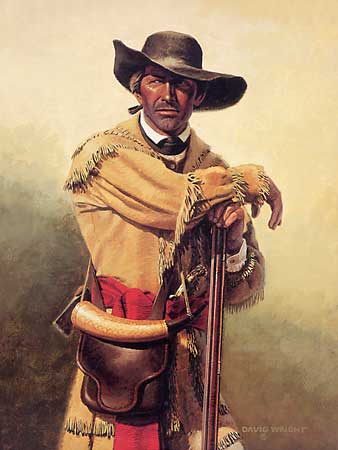 The standard arm of the day was the smoothbore musket. Both sides relied on the .75-caliber Brown Bess, a stalwart, soldier-proof warhorse. The smoothbore could be reasonably accurate at 50 yards; beyond that, the wobbly projectile couldn’t be relied upon. And the weapon had no sights — just a bayonet lug at the muzzle that served as a kind of shotgun bead. It was a weapon suited for massed volley fire and to mount a bayonet.

“I do maintain that no man was ever killed at 200 yards by a common soldier’s musket by the person who aimed at him.  A soldier’s musket, if not exceeding badly bored and very crooked as many are, will strike the figure of a man at 80 yards; it may even at 100 yards; but a soldier must be very unfortunate indeed who shall be wounded by a common musket at 150 yards, provided his antagonist aims at him; and as to firing at a man at 200 yards with a common musket, you may just as well fire at the moon and have the same hopes of hitting your object.”

In comparison, the American long rifle, which had evolved out of the German Jaeger rifle, was a marvel of accuracy. It had fixed iron sights. It was rifled, which stabilized the projectile. The rifles of the era were of much smaller caliber than the musket — .40 to .54 or so — and they were loaded with a patched round ball. The greased patch made for smooth loading and formed a gas seal that improved velocity and consistency.

Contemporary descriptions of the riflemen’s prowess demonstrate the superiority of the arm as a precision weapon. The Virginia Gazette,  September 9, 1775:

“A man held between his knees a board 5 inches wide and seven inches long, with a paper bulls-eye the size of a dollar. A rifleman at 60 yards without a rest, put eight bullets in succession through the bulls-eye. From the same source we are told that the rifleman gave an exhibition “in which a company, on a quick advance, placed their shots in 7 inch targets at 250 yards.”

That’s damn good  extreme long range shooting, and since Tim Murphy was among Morgan’s 500 chosen men, he was certainly capable of delivering it.

The disadvantage of the rifle was that it was comparatively slow to load and could not mount a bayonet. To be effective, riflemen had to be supported by musket-armed light infantry who could keep up a volume of fire and defend against a bayonet charge.

Here’s what we know for sure about Murphy and the battlefield death of Brigadier General Simon Fraser: Murphy was part of Morgan’s rifle corps and he was a capable marksman. Fraser was a conspicuous target on horseback, rallying his troops (mainly comprised of German Hessian mercenaries) in the heat of a hard-fought battle. It seems clear that Fraser was singled out by General Benedict Arnold (this was before he turned his coat) and Col. Morgan to be targeted by rifle fire.

Shots hit the crupper of Fraser’s saddle and parted his horse’s mane before a ball took him in the belly. He slumped in the saddle and was escorted by an aide off the field of battle. He died later that night. The elimination of Fraser did seem to throw the hard-pressed British troops into disarray and contributed to Burgoyne’s defeat. 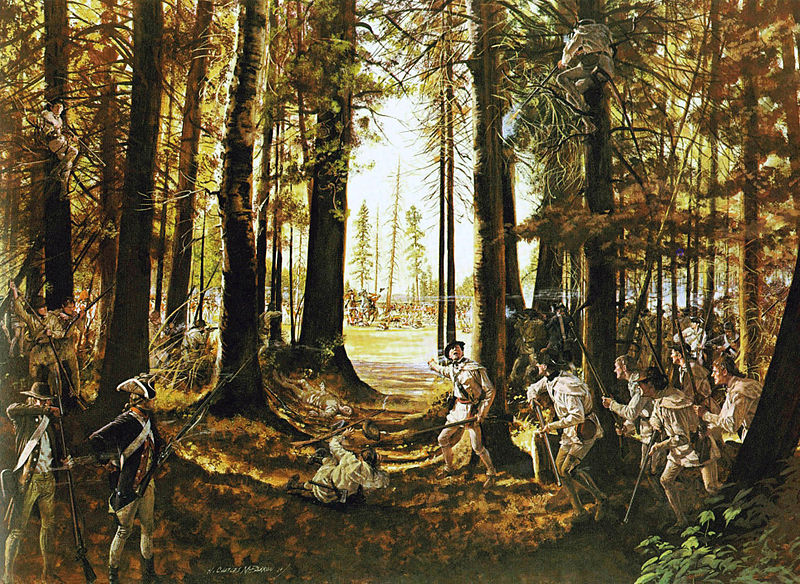 The only sources that single out Murphy as the marksman who killed Fraser are from many decades after the events, and as is often the case when folklore becomes history, a story is repeated as “fact,” and embellished with the telling.

BTW, there’s another candidate for the honor — an old man with “a long hunting gun” witnessed by one Ebenezer Matoon, who reported that:

“…several officers, led by a general, appeared moving to the northward, in rear of the Hessian line.  The old man, at that instant, discharged his gun, and the general officer pitched forward on the neck of his horse….”

Other aspects of Murphy’s purported feat have grown in the telling. He was supposed to have been armed with a Golcher double rifle, enabling him to fire shots in quick succession. This is almost certainly not the case. Murphy appears to have owned a Golcher later in his life, when he was a farmer in the Mohawk Valley, but this would have been in the 1790s at the earliest and probably in the early 19th century. That tracks with Golcher’s career. Murphy was almost certainly armed with a conventional long rifle at Saratoga.

The distance of the kill shot has been stretched to absurd lengths. I spent many years shooting flintlock long rifles, and I can assure you that, given roundball ballistics and fixed iron sights, shots over 200 yards get complicated. Harrington thoroughly describes the ballistic problems with the notion that Murphy shot Fraser at a quarter-mile (440 yards). For the sake of space, let’s just stipulate that a 28-foot holdover on a moving target, to say nothing of wind-drift is… absurd.

Matoon’s old man allegedly fired on Fraser from 66 yards (why so precise a figure I do not know). If Murphy did shoot Fraser, the range was closer to that than to a quarter-mile.

Murphy could have made the kill shot on Fraser. Maybe he did. We just can’t know. It’s safe to assert that General Fraser was killed by aimed rifle fire from Morgan’s men, and that his death was decisive. More than that is folklore.

It doesn’t diminish Tim Murphy a bit to let the Saratoga shot-heard-round-the-world story go. He was a real deal Frontier Partisan warrior, and his actions on the Mohawk Valley frontier during the years after Saratoga are enough to bring honor upon his name. We’ll take that story up in Part II.