The NRA’s American Rifleman this month contains a wonderful piece on the gunsmithing operation at Colonial Williamsburg.

You can read it online here.

I think of the classic long rifle as the American Ulfbehrt — and hold the makers of such weapons in the same esteem the Norsemen held the swordsmiths of yore. Which is to say, I am convinced they are endowed with a form of magic.

The intuitive skill involved in forging a barrel is astonishing — and then to ream it on a hand-turned machine to make it shoot straight and true… magic I tell ye! The grace and beauty of the piece is the full realization of an extraordinary piece of functional art. It’s awesome, in the true sense of the word. 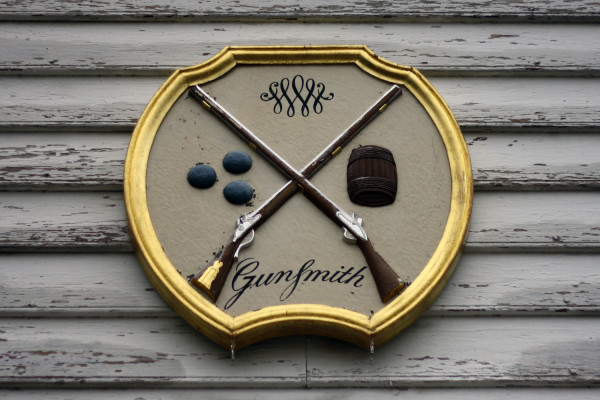 “Sometimes we have a hard time convincing people that we are really doing all this work,” (gunsmith Richard) Sullivan said. “The rifles we make have handmade screws. If it’s a black metal part of the gun, it’s shaped by hammering. There is a phenomenal 18th century advertisement in which a gunsmith says he was ‘ready and willing to make a rifle gun that is barrel, lock and mountings from the bar, the stock from the tree.’ And that’s how we make a gun here.”

“People today are so detached from handwork, to think that you can make something that is beautiful, functional and precise using a hammer, a saw, a file and a chisel just baffles a modern audience,” (Colonial Williamsburg master blacksmith and Director of Historic Trades and Skills Ken) Schwarz noted.

We need as much of that kind of bafflement as we can get in an increasingly artificial world.

Hats off to the keepers of the old ways. Long may their magic endure!