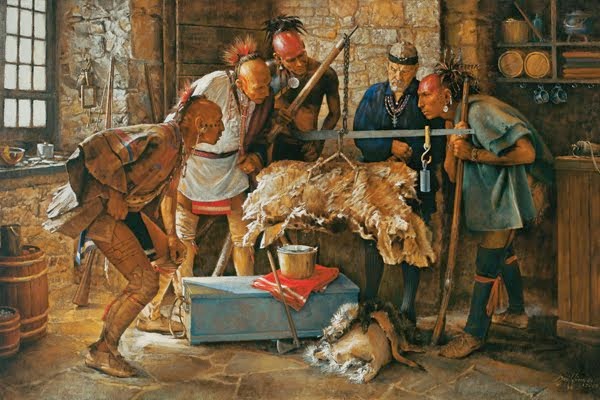 Trade was always “A Delicate Balance” — politically and diplomatically as well as economically. Rivalries could turn deadly. Art by Robert W. Griffing.

The Fur Trade was a deadly serious business. Interrogate the shade of Memeskia on that score. The Miami village leader led a rebellion against French commercial interests in the Ohio Country in the mid-18th Century, and, like some upstart who gets crossways with the Sinaloa Cartel, he paid for it in the most gruesome fashion.

The hit on Memeskia in 1752 might be seen as the opening salvo in the French and Indian War, aka the Seven Years War, aka the real First World War. Deadly serious business indeed.

The surge of borderlands history scholarship in the past 25 years or so has restored to the native peoples of the Great Lakes and Ohio Valley country their agency in their own history. For most of two centuries, history and popular tended to portray them as the savage allies of the French in their rivalry with the British for domination of the continent.

In reality, the First Nations were politically sophisticated people navigating an era of great flux, pursuing their own interests as best they might, playing one European power against another whenever possible in order to maintain their political and military power and obtain the best deals possible on the trade goods upon which they had become dependent.

The French had held a near monopoly on the trade in the North American interior for decades, but their goods were high priced and of inferior quality to English manufactures. In the 1740s, British traders from Pennsylvania launched a concerted trade offensive into the Ohio Country, establishing themselves in native villages, offering their wares and highly-prized blacksmithing services.

For many Indians, the presence of the British meant opportunity — not least to establish or enhance their own political influence through trade connections.

Memeskia was a minor Miami village leader and war chief in 1747, when he sacked a French trading post in an act of rebellion against the French trading establishment. The act earned him a following and, at the invitation of the Shawnee, he and his followers established a village at Pickawillany in what is now west-central Ohio.

As Michael A. McDonnell recounts in his history Masters of Empire: Great Lakes Indians and the Making of America:

Memeskia also persuaded the English to formalize their relationship, traveling almost 500 miles eastward to Lancaster, deep in the English colonies, to sign a treaty of friendship and alliance with commissioners from Pennsylvania on July 23, 1748. To the English, Memeskia claimed to be at the forefront of a new wave of defections from the French. 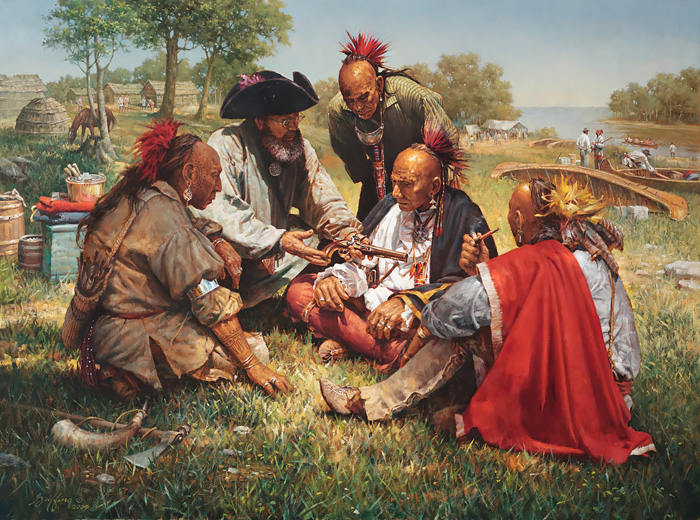 Memeskia’s alliance with the interlopers from the east earned him the nickname Old Briton. It also earned him the wrathful attention of French authorities — and of the Anishinaabeg Ottawa (Odawa) who saw their influence — closely tied to French influence in their base at Detroit — slipping away

Memeskia’s movement created an intolerable threat — but one that was hard to counter. The Miami rebel was canny. He protected himself and his base at Pickawillany by building an elaborate kinship network that made it hard for other tribesmen to attack him, out of fear that they would bring down the wrath of Memeskia’s kin and spark a native civil war.

Then he got overconfident. In classic fashion, pride and hubris got the better of Memeskia. When an Odawa delegation came to Pickawillany in 1751 to persuade the rebel son to return to the French fold, he boasted of his friendship with the English and with the Iroquois. The rebel leader was high-handed and insulting. It would prove a fatal mistake.

It wasn’t just the insults, which were bad enough. As McDonnell points out, Old Briton’s behavior…

…demonstrated the place Memeskia envisioned for the Anishinaabeg in this new configuration. The Odawa began preparing for war.

They first laid some important diplomatic groundwork, squaring the Iroquois, who, it turned out, didn’t care much about protecting their new friend. Then they and the French planned and operation and handed it to the man most capable of pulling it off.

Memeskia managed to attract converts to Pickawillany and cobble together a diverse kinship network that helped him protect his village. But another young upstart would prove his match. At Michilimackinac (on Lake Michigan), one of a vital few men who were products of the intimate alliances made in the uncertain first half of the century was about to come of age. Enmeshed from birth in a world of densely woven Indian and French relation that continued to thicken through his young life, Charles-Michael Mouet de Langlade would put a decisive end to Memeskia’s dreams of an expansive southern anti-French alliance.