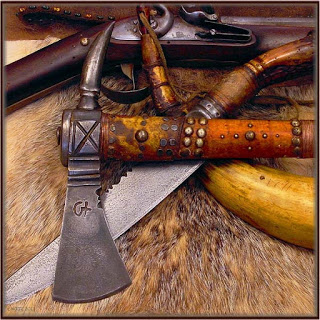 Western Martial Arts has seen a tremendous surge in interest over the past 20 years, as enthusiasts have resurrected old blade combat manuals and discovered that — surprise! — the hyper-martial cultures of Europe weren’t just bashing at each other with sharp implements, but actually had martial arts systems as throughly thought-out and effective as anything out of Asia.

While I salute the HEMA folk (Historical European Martial Arts), my interests in the field are limited, since I am not a medievalist. I have some interest in the 18th and 19th century sword, particularly the Scottish and Irish stuff, which has some play in North American frontier history. Frontier combatives are starting to get some attention in HEMA circles, and you can bet my attention was grabbed by this blog:

Mark Hatmaker is a martial artist and author operating out of Knoxville, Tennessee. He also has a blog on Westerns. Indigenous Ability offers some situational awareness drills and some tough workouts, a bit of history, a bit of practical philosophy and a variety of posts on rough & tumble fighting — all the kind of things I find endlessly interesting and valuable in a quest to live a vibrant life.