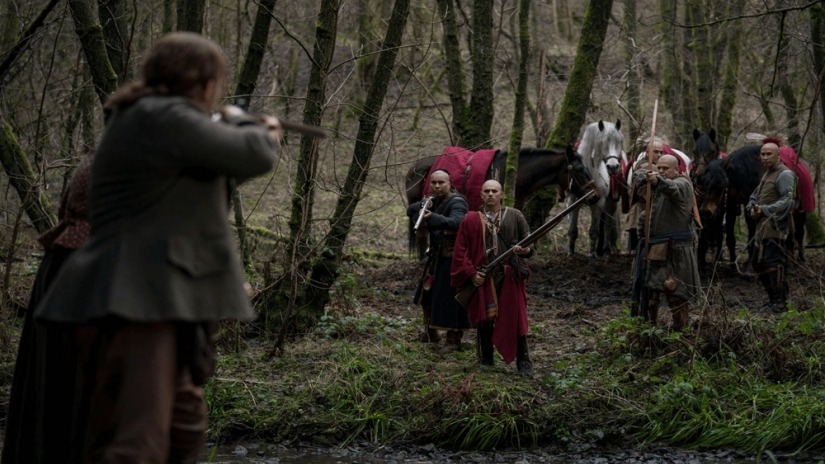 This season of the Clan Cornelius obsessenach show has taken Claire and Jamie Fraser into the mountains of North Carolina in 1768, where their land grant butts up against Cherokee lands. The line of settlement was constantly being adjusted and readjusted along the Appalachian chain through the 1760s and the British Crown tried to restrain the westward impetus of white settlement so as to avoid another uprising like that led by Pontiac in 1763-64.

The episode revels the kind of cultural anxiety, blindness and misunderstanding that contributed to a cycle of confrontation, often followed by atrocity and counter-atrocity, events that stained the Appalachian frontier blood red as the colonies slid into the American Revolution.

It was an interesting bit of synchronicity, for that fraught term — “savage” —cropped up Sunday afternoon as Craig Rullman, Pete Rathbun and I recorded a Running Iron Report Podcast.

We were discussing Allan W. Eckert’s book The Frontiersmen as part of a series on the “Stories That Shaped Us.” Nothing had more of a shaping effect on me than the story of Kentucky Frontier Partisan Simon Kenton.

I was describing Kenton’s capture by Shawnee Indians in 1778, while he and two companions were engaged on a mission to steal Shawnee horses. A young warrior named Bonah claimed the capture of the frontiersman, and Bonah and his comrades decided to indulge in some sport. They tied Kenton backwards on a horse, then whipped the horse through the trees and brush. That was only the beginning of a brutal, traumatizing ordeal. 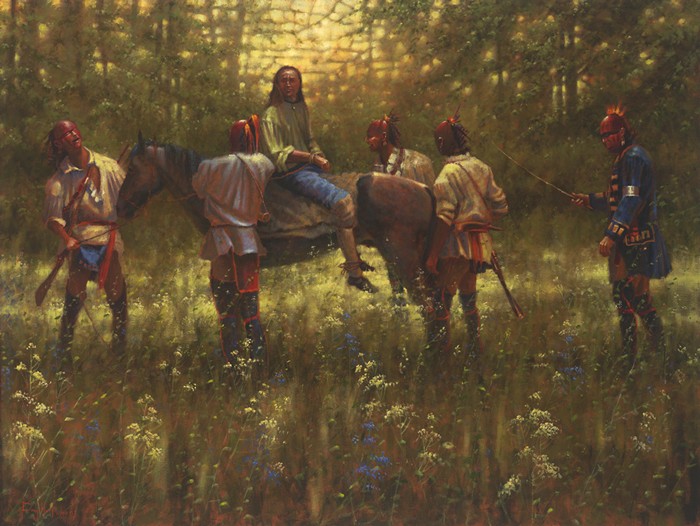 Craig pondered what Kenton must have been thinking, being at the mercy of a “savage” intent on inflicting as much punishment on him as he could bear.

I must have looked a bit startled — “Savage” is just not a term that gets used much anymore. Craig amplified, standing by his usage and pointing out that if Bonah showed up on our porch today, we’d all see him as a savage — a dangerous, ferociously capable, terrifying savage. Which is true. And that’s sure as hell how the frontier people saw the Shawnee and their Mingo, Wyandot and Miami allies in 1778.

The past 50 years or so of frontier scholarship has done a great deal to enhance our cultural understanding of the First Peoples of the North American woodlands, and to see the story of the 18th century frontier “looking east from Indian Country.” This is all to the good — a very good thing indeed. Eckert’s works, in fact, were part of that movement.

But while we benefit from the humanizing effect of such storytelling, it is well not to forget that the woodland peoples were terrifying in aspect and action to the frontier peoples. Their fear and loathing of the “savages” was not baseless. 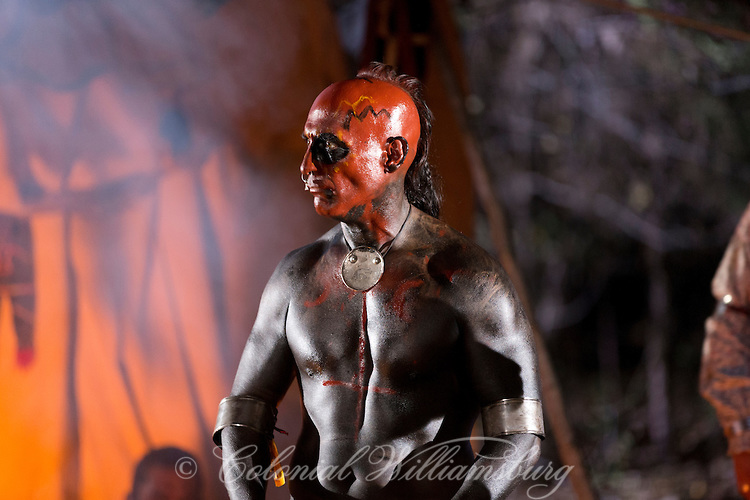 A Shawnee Warrior portrayed by a Colonial Williamsburg reenactor. 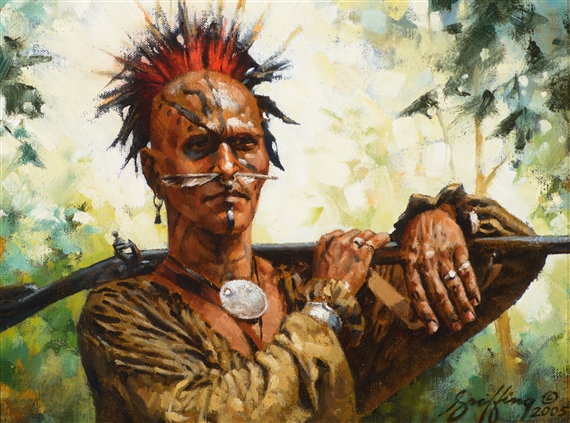 Painted for war and moving through the dark woodlands like spectres, the forest warriors appeared demonic. And their mode of warfare was exceedingly, personally violent and cruel. Tortures of the most agonizing, soul-searing stripe were part and parcel of forest warfare, and the natives occasionally engaged in ritual cannibalism.

Of course, the Americans could be savages, too, a fact from which Eckert never flinched. The monomaniacal murderousness of a Lewis Wetzel, or the criminal atrocity of the massacre of Christian Delaware at Gnadenhutten, Ohio, show plainly that savagery is not racially determined.

The very nature of frontier warfare lent itself to savagery. As the early historian of the Ohio Valley frontier Lucullus McWhorter noted:

“Life on the border tried men’s souls. It gave to some the outlet for a venomous passion for blood.”

The “Savages” episode of Outlander is clearly posing the question: “Who is the savage here?” It’s a worthy one to ask. The creators of the show have worked hard to thread a needle in their depiction of the frontier interaction between the settlers and the Cherokee, trying to keep it realistic while not stepping into a hornet’s nest with a “woke” culture that knows nothing about its history but is quick to jump to outrage.

The reality is that the woodland cultures were steeped in lifeway that exalted not only violence of action, but cruelty for the sake of cruelty. It is important to recognize that these were deeply spiritual and politically sophisticated people who also meted out torture and who retaliated for wrongs done to them with vengeful attacks on innocents. The Anglo-American civilization that ultimately conquered them after decades of bloody resistance supposed itself to be superior — and its avatars often behaved with shocking brutality themselves.

We mustn’t be afraid to call a savage a savage — it does a disservice to the darkly heroic tale that is the history of the Ohio Valley frontier.

At the same time, it is well to note that in later years, Bonah was a guest at the Ohio dinnertable of Simon Kenton, a man he’d done his best to see burned alive. The country, by then, was civilized and the Indian and the frontiersman alike had been pushed aside by a civilization that was less savage than they, but nevertheless relentless. There is something blessed and poignant in the image of two old Frontier Partisans — a pair of savages perhaps — sharing a pipe and memories of the good old days when they sought each others’ scalp.