This is what happens when you have capable scouts on point and out on the flanks — they catch things you’ve missed. The only responsible thing to do is to act.

A UK scholar, Robert N. Watt, has produced a couple of volumes on the Victorio War that are going to find a place next to Hutton and Sweeney on the Frontier Partisan bookshelf. I just have to come up with a bale of plews to trade — cuz these tomes ain’t cheap. By all appearances, though, they are keepers. 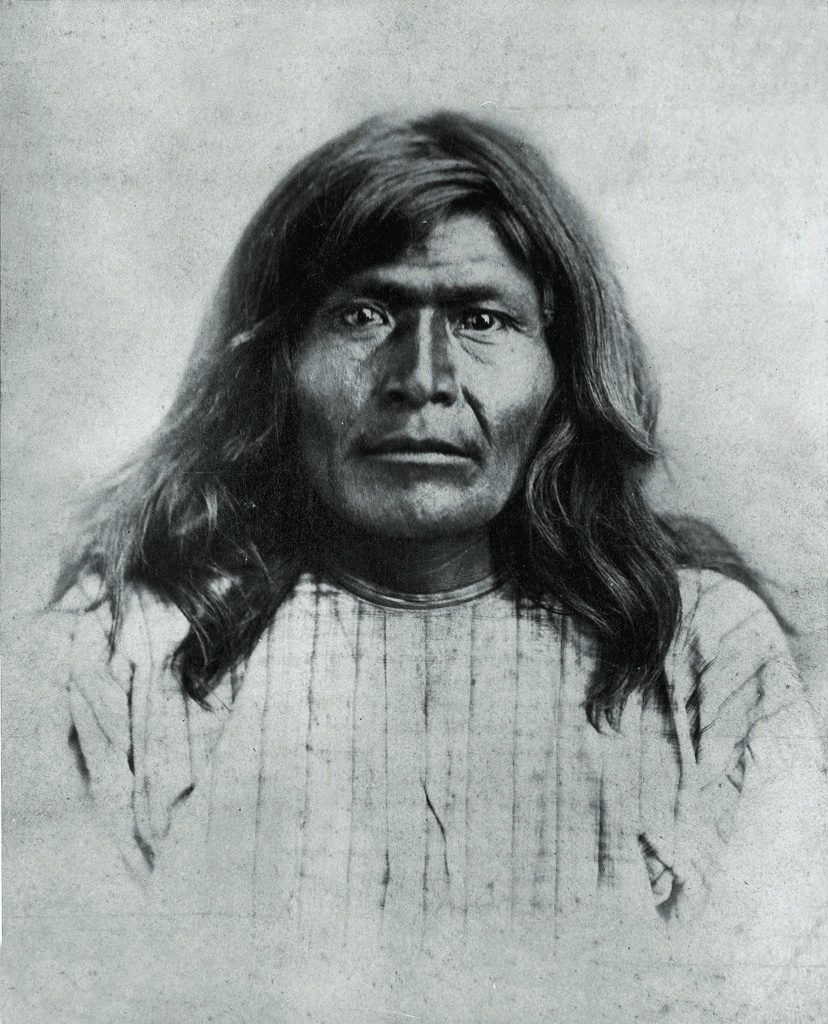 Victorio — one of the great ones.

I am charmed to read that Watt’s interest in the Apache was sparked in his youth by the TV series The High Chaparral. I have very faint memories of that series, which aired from 1967 to 1971. Set in the Arizona Territory of the 1870s, its 98 episodes have garnered a cult following, not least because it was ahead of its time in incorporating the important Hispanic influence on the ranching culture of the region.

Light a spark and fan the flame just a little and you have a lifetime’s passion, as I can well attest.

Watt is a lecturer at the University of Birmingham, and teaches a course on the Indian Wars for the history department there. He’s apparently walked the ground a lot in researching for these books and for a couple of excellent entries in the Osprey military history series.

The first volume of his exhaustive study of the Victorio War is titled I Will Not Surrender the Hair of a Horse’s Tail: The Victorio Campaign 1879. 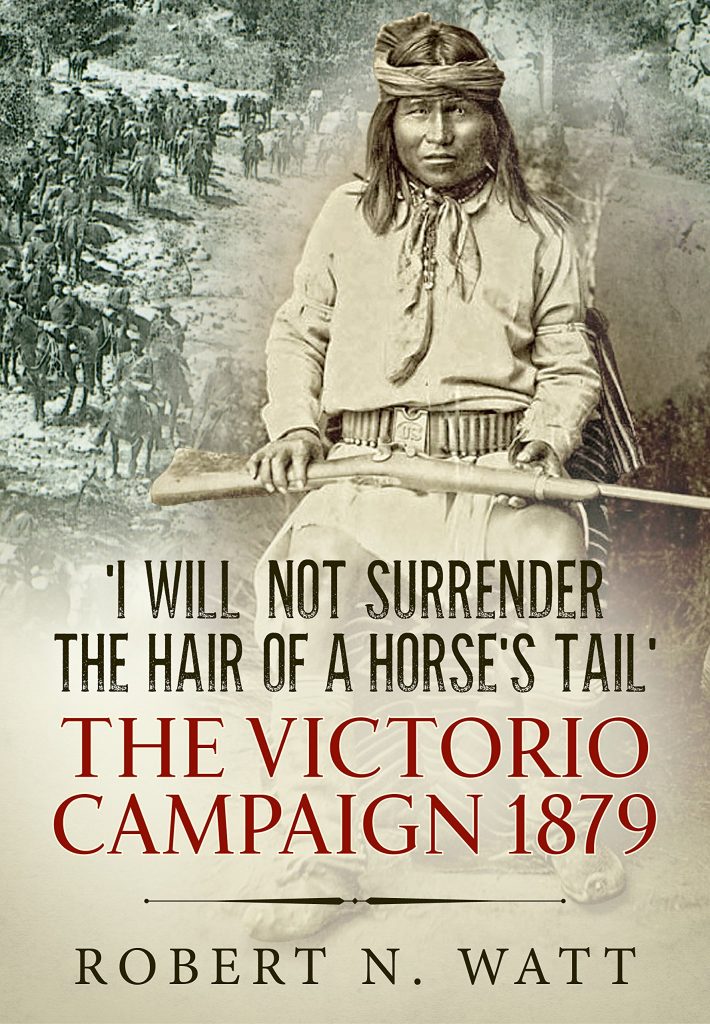 This volume covers the background to the Victorio Campaign of 1879-1881. In the early 1870s, a mixture of diplomacy and successful military campaigning by General George Crook led to the formation of several reservations for various Apache groups such as the Mescalero, Chiricahua and Western Apaches. Almost before the ink was dry on these treaties, an effort was made to rationalise this arrangement by placing the Apaches upon one reservation (the concentration policy).

The first reservation to close was the Fort Bowie reservation, which belonged to the Chokonen (Central Chiricahua) Apaches. Some chose to resist, and this resistance – combined with the continued drive for concentration — brought about the closure of the Chihenne (Eastern Chiricahua) Apache reservation at Ojo Caliente, New Mexico, in 1877 and their removal to the San Carlos reservation in Arizona.

The Chihennes were led by Victorio, Nana and Loco at this time, and they chose to accept the move, even though this was to the territory of the Western Apaches (with whom they often had a mutually hostile relationship). The land they were allocated was not healthy and a deadly feud between the Chihennes and the San Carlos Apaches quickly flared up; in September 1877, Victorio led a large portion of his people off San Carlos and tried to return to Ojo Caliente.

Between 1877 and 1879, Victorio and his followers resisted their removal back to San Carlos — periodically fleeing and raiding mainly in Mexico to survive; they minimised hostile activity in the USA in order to keep alive their hopes of a return to Ojo Caliente. By August 1879, Victorio gave up hope that a return to Ojo Caliente was possible and declared war on the USA, as well as continuing their conflict with the Mexicans.

Between September and December 1879, Victorio and his warriors — no more than 150 strong (and often as little as 50) — inflicted a number of defeats upon the Ninth Cavalry, U.S. citizen volunteers and Mexican State troops. By the end of this volume, they had taken refuge — undefeated — in Northern Mexico and were poised to return to continue their battle with the USA for the return of their reservation.

This research will outline the previously unreconstructed and sophisticated strategies and tactics utilized by Victorio, Nana and their followers to defeat every opponent sent against them.

The second volume titled Horses Worn to Mere Shadows: The Victorio Campaign 1880 drops in November — which is turning out to be a cornucopia of Frontier Partisan delights. 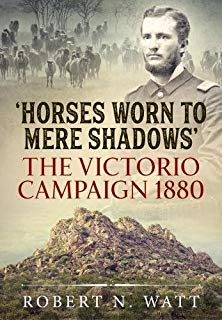 Here’s the description on that one:

This study, following on from the author’s acclaimed book “I Will Not Surrender a Hair of a Horse’s Tail,” commences with Victorio’s return to New Mexico in January 1880. The US army’s January to February campaign illustrates the operational decoy strategy employed by Victorio to protect his own logistic support whilst simultaneously undermining that of his opponents.

The Hembrillo Canyon operation in April 1880 saw the largest battle of the Victorio Campaign. By the end of May 1880, Victorio’s warriors have rendered the Ninth Cavalry unfit for field service. This was achieved through the Apache strategy of directly and indirectly targeting the U.S. army’s horses and mules. Yet the Apaches also suffer their first major defeat of the campaign at the end of May. After regrouping and engaging in widespread raiding in northern Mexico, Victorio engaged the Tenth Cavalry in Western Texas during July-August 1880.

Failing to break through that regiment’s defenses he retreated back into Mexico. This allowed the U.S. army in New Mexico to rest and recover. By September 1880, the U.S. army had negotiated a cross border operation of questionable legality. Known as the Buell Expedition, the aim was to coordinate with Mexican state troops to destroy the Apaches.

This volume will end with Mexican state troops, led by Colonel Joaquin Terrazas, inflicting a major defeat upon the Apaches at Tres Castillos.

I’m supposed to be buying books on the Philippines and Cuba and Nicaragua dammit! Ah, well… Like Watt, I am too far gone down the Apache Trail to turn aside now.