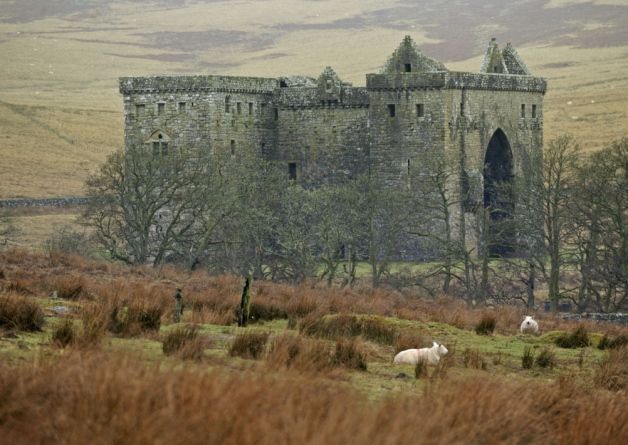 By all accounts, the semi-ruined Hermitage Castle in Liddesdale, Scotland, is a grim, gloomy and forbidding place. Sinister, even. Well it ought to be, for the history of the keep and the land about is soaked in blood.

Not for nothing was the Hermitage called “the guardhouse of the bloodiest valley in Britain.”

The fortress was a key strategic point in the Scottish/English borderlands that were for centuries the wildest of wild frontiers, contested in bloody campaigns and cross-border raids. 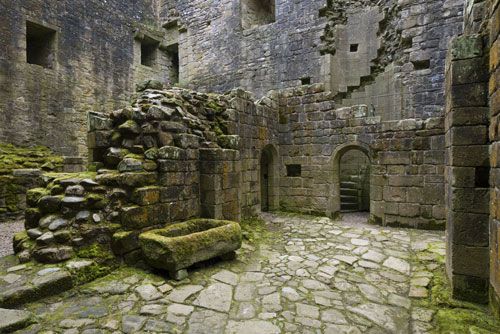 This fine interior shot of the castle was taken by John Charlton. See his comments below.

The castle was built around 1240 by Nicholas de Soules, a Norman-descended borderlord, heir of conquest. His descendent, William de Soules, Lord of Liddesdale, served Edward I of England, the Hammer of the Scots, then switched his allegiance to Robert Bruce — for a time. In 1320, he forfeited the Hermitage Castle due to his involvement in an English-inspired plot to usurp the throne, perhaps on his own account but more likely in order to install Robert’s rival Edward Balliol as King of Scotland.

He confessed his treason, and was locked up in Dumbarton Castle, where he died.

That is, if you believe the historians. Folklore gives us a different story.

For, you see, William de Soules was a sorcerer, a practitioner of Black Arts learned from Michael Scott, the Wizard of the North. He kidnapped local children for use in dark rites, and he ravished local women with a rapacious appetite.

One day in 1320 he kidnapped a young Armstrong woman and tried to return with her to Hermitage Castle. When her father tried to stop him, de Soules killed him on the spot. However, by now a crowd had gathered, and de Soules was on the verge of being lynched when Alexander Armstrong, the Laird of Mangerton, intervened, calming the crowd and advising de Soules to return to Hermitage without his captive. De Soules was far from grateful, instead developing a hatred for someone who, as his social inferior, had demonstrated the power to influence the crowd and save de Soules’s life. De Soules therefore invited Alexander Armstrong to a banquet at Hermitage, and when he arrived, stabbed him in the back.

In his evil works, de Soules was assisted by his familiar, Robin Redcap, aka Robin Sly. A redcap is a kind of goblin frequently associated with the ruined castles of the dark and bloody ground of the Scottish/English Borders. Their main occupation is the robbery and murder of travelers, dying their caps in the victims’s blood. They are driven to kill frequently, because if the blood dries on their cap, the Redcap himself will die. Despite being shod in iron, the goblins are quick and deadly with their taloned hands and the pikestaff they traditionally wield.

Robin Redcap was an especially virulent goblin, who imbued de Soules with immunity to harm from weapons of iron and steel and from hanging. Sir Walter Scott, the great Scottish author, recounted the charm in 1802 in Minstrelsy of the Scottish Border:

Lord Soulis he sat in Hermitage castle.
And beside him Old Redcap sly ;
“Now tell me, thou sprite, who art meikle of might,
The death that I must die ?”

“While thou shalt bear a charmed life.
And hold that life of me,
’Gainst lance and arrow, sword and knife,
I shall thy warrant be.”

That’s pretty good protection for an evil Borderlord, but it proved insufficient to counter the rage of an aroused populace. When the locals rebelled against the depredations of de Soules, they solved the problem of the protective charm by overpowering the Borderlord, hauling him off to a megalithic circle called Nine Stone Rig and boiling him in molten lead. 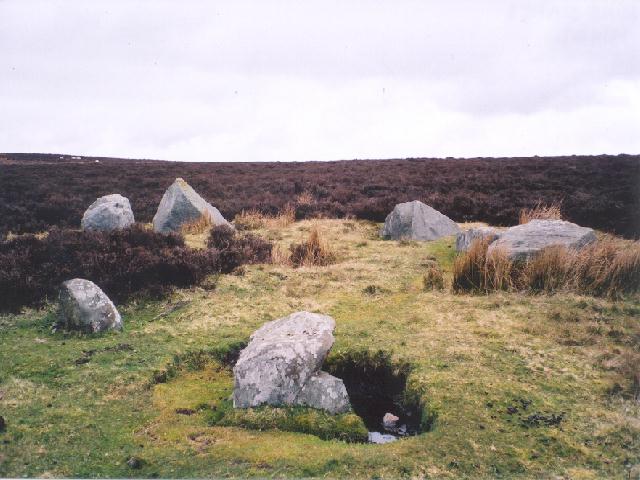 That, apparently, did the trick.

On a circle of stones they placed the pot,

On a circle of stones but barely nine;

They heated it red and fiery hot,

Till the burnished brass did glimmer and shine.

They rolled him up in a sheet of lead,

A sheet of lead for a funeral pall;

They plunged him in the cauldron red,

And melted him, lead, and bones, and all.

At the Skelf-hill, the cauldron still

The men of Liddesdale can shew;

And on the spot where they boiled the pot,

The de Soules clan lost the castle, which passed to Douglasses and Hepburns before   serving as the keep of the notorious Border Reiver Sir Walter Scott of Buccleuch, who famously broke the outlaw Kinmont Willie out of prison in 1596, royally pissing off none other than Queen Elizabeth I herself.

Robin Sly reportedly still haunts the ruins of the lonely keep on the moor. Perhaps it is unwise, but I should very much like to visit Hermitage Castle — goblin or no. He’ll nae get my blood for his red cap!

Here’s the tale of Kinmont Willie told in the finest Scottish Borders tradition — a ballad: