What can I tell you: I’m addicted to Story. I didn’t mean to find another tale to dive into, especially right now, when I can barely run the traps I’ve got out there.

But then, I also think it’s a sin — make that a SIN — to pass by a good tale. A SIN, BAD LUCK — nothing good. There I was, in the bookstore, minding my own business while my dad tottered around the World War II section. There on one of them “hot new books” tables was a novel by one William Kent Krueger, entitled Desolation Mountain. That’s a title that’s bound to get my attention. 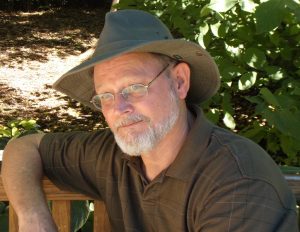 Turns out, it’s the latest of a two decades-old series of crime novels set in the Great North Woods of Minnesota, featuring an Irish/Ojibwe investigator named Cork O’Connor. Don’t know how I missed that, but… there it was.

Now, peltries is scarce this September, what with moving and sending Ceili back to college and all, so I restrained myself from an impulse purchase and hied off to the library (god bless ’em). They didn’t have Desolation Mountain, but they had several of the Cork O’Connor books. I grabbed Red Knife. You’ll see why.

When the daughter of a powerful businessman dies as a result of her meth addiction, her father, strong-willed and brutal Buck Reinhardt, vows revenge. His target is the Red Boyz, a gang of Ojibwe youths accused of supplying the girl’s fatal drug dose. When the head of the Red Boyz and his wife are murdered in a way that suggests execution, the Ojibwe gang mobilizes, and the citizens of Tamarack County brace themselves for war, white against red.

Both sides look to Cork O’Connor, a man of mixed heritage, to uncover the truth behind the murders. A former sheriff, Cork has lived, fought, and nearly died to keep the small-town streets and his family safe from harm. He knows that violence is never a virtue, but he believes that it’s sometimes a necessary response to the evil that men do. Racing to find answers before the bloodshed spreads, Cork himself becomes involved in the darkest of deeds. As the unspeakable unfolds in the remote and beautiful place he calls home, Cork is forced to confront the horrific truth: Violence is a beast that cannot be contained.

I do like me some Rez Noir — but the set-up isn’t what grabbed me. The opening snapped my head back and put a blade to my throat:

It was not yet dawn and already he could smell death.  It came to him in the scent of the bear fat mixed with red ochre that was the war paint smeared across his face.  It was in the sulfur odor of his powder horn and in the stink of his own sweat-drenched body as he bent to the stroke of his paddle.  It was in the air itself, something crisp and final, as if these were the last breaths he would ever draw, and it made his nostrils burn.

In the east, the sky hinted at color, a faint flush of red.  The dark lake surface around the canoes carried a suggestion of the same hue, blood mixed with the juice of blackberries.  The only sound was his own breathing and the occasional liquid gurgle of water as he swept his paddle back.

His name was Diindiisi, which meant Blue Jay.  He was sixteen years old.  He was Anishinaabeg, one of the Original People.  This was his first war party.

For years his father and the other men of his village had been preparing him for this moment.  Several days earlier, they’d painted him black, a sign that in this business he was not yet initiated.  The night before, they’d forced him into the bitter-cold water of the lake, where he’d washed himself clean.  Afterward they invited him to join in the preparations for battle.  They painted their faces.  Those who had the honor of doing so adorned their hair with eagle feathers, symbols of the enemies they’d slain.  They attached thepenasewiam, holding charms for invulnerability, to their belts or armlets or headdresses.

Now Blue Jay was among them, a warrior, his knife sharpened, his war club at hand, his flintlock cleaned and loaded.  His father knelt in the stern of the birch-bark canoe.  Blue Jay had the bow.  He was afraid, more afraid than he’d ever been.  He was also excited, and the two emotions waged a battle inside him that no man looking at his face could see.

There were ten canoes, two warriors in each, a small war party.  The enemy were Dakota from the south.  That alone was enough to get them killed.  But they were hunters as well, trespassing, taking game the Anishinaabeg would need for their own people in the coming winter.

The canoes neared the shoreline.  Blue Jay leaped silently to land and lifted the bow so that the bark of the hull wouldn’t snag and tear.  His father followed and together they settled the canoe on the shore.  They gathered their weapons.  In the gray light of early morning, they followed the others along a deer trail into the trees.

Blue Jay knew where the hunters were camped, which was in a clearing next to a fast-running stream.  He knew because the enemy had been scouted and because he smelled the char from the fire they’d lit the night before.  It was only a faint scent on the breeze, but in the deep woods it was profoundly distinct, especially to the heightened senses of a young man on his way to war.

Ozhaawashkwaabi, Black Eye, who led the party, lifted his hand, signaling them to stop.  He pointed left and right, and the warriors fanned out.  Blue Jay crept to a twisted-trunk cedar tree only a stone’s throw from where his father knelt behind an uprooted pine that a powerful wind had pushed over sometime before.  In the clearing in front of them lay a circle of ash from a fire.  Strewn around it were the blanketed forms of the sleeping Dakota.  Blue Jay counted thirteen.

His hand went to the hilt of his knife, then to the war club shoved into his belt.  He slid the powder horn from his chest and set it at the base of the cedar.  He raised his flintlock and waited.  His heart beat so furiously he was afraid the tree he leaned against would begin to shake.

In his mind, he went over the things his father had said to him the night before.

“Choose one of the enemy and aim carefully.  Wait until you hear Black Eye give his war whoop, then shoot.  Shoot well.  Bring your enemy down as you would any animal you hunt in the forest.  Give your own war whoop.  Make it fierce.  It will fill you with courage and it will strike fear in the heart of the Dakota.  Run to your enemy with your war club in your hand.  Be wary.  A man down is not a man dead.  Smash the bone of his skull.  And then take his scalp in the way I have told you.  The scalp is important.  It is proof of your kill, proof you are a warrior.”

One of the Dakota began to stir.  He sat up and stretched.  He stood, scratched at his crotch, and lightly kicked the blanket of the man lying next to him.  He spoke in a language Blue Jay didn’t understand and then he laughed.  The other blankets began to move.  One by one the enemy awakened.

The sun had touched the tops of the aspen trees that edged the stream.  A crow on a high branch began a long string of grating caws.  One of the enemy turned to look, picked up a rock, and threw it to no effect.  Blue Jay sighted his rifle barrel on the back of that enemy.  With his thumb, he drew back the hammer of the flintlock.  There was the smallest of clicks as the hammer locked, hardly more than the snap a very small twig might make.  The Dakota nearest him turned suddenly in his direction.  He peered directly at the cedar that shielded Blue Jay.  He spun and shouted something to the others.  At that same moment, Black Eye let fly his war cry. 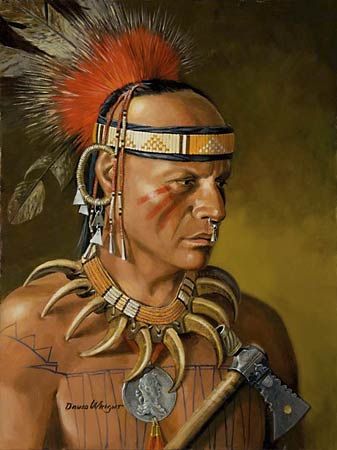 Blue Jay squeezed the trigger.  The hammer released.  The flint hit the strike plate.  The powder exploded.  Through the drift of smoke that materialized in front of his face, Blue Jay saw his enemy jerk and collapse.  Other Dakota hit the earth, though Blue Jay didn’t hear the shots that brought them down, he was so intent on his own actions.

He dropped his flintlock and drew his war club.  He gave a yell, so loud and harsh it seared his throat, and rushed forward into the clearing.  All around him rose the cries of battle, sharp and desperate.  He heard and did not hear.  His mind was on the enemy he’d felled with his musket ball.  The man lay on the ground, facedown.  The ball had hit him in the right shoulder blade and blood welled up through a hole ragged with white bone fragments.  The man didn’t move.  There appeared to be no breath in him, no life.  Blue Jay gripped his war club in his right hand.  With his left, he grasped the Dakota’s shoulder and turned him over.

He was surprised.  It was not a man but a boy not even as old as he.  He was surprised again when the boy’s eyes sprang open and his hand flew upward, thrusting a knife blade toward Blue Jay’s belly.  Blue Jay spun away, but not before the blade sliced his flesh.  He swung his war club and knocked away the hand that held the knife.  With a powerful sweep of his leg, the Dakota boy kicked Blue Jay’s feet out from under him and he went down.  The boy was on him.  They grappled, rolling in the wet grass.  The Dakota was strong and lithe, but the musket ball had weakened him.  Blue Jay felt the boy’s strength ebbing quickly.  He wrenched his right hand free and swung his war club again.  It hit the Dakota’s head with a sound like chopping rotted wood.  Blue Jay rolled away and came to his feet, but his enemy didn’t move.  He planted his foot on the Dakota’s chest and swung his war club again and again, until the enemy’s face and forehead were a bloody mush.

Cries went up in celebration.  He scanned the clearing where the slaughter was nearing an end.  His father, tall and blood spattered, strode toward him, a scalp clenched in his fist.  He looked down at the dead Dakota and nodded his approval.

Blue Jay drew his knife.  He’d skinned animals all his life, and skinning the head of the Dakota was easy.  He slit the forehead just below the hairline, cut behind an ear, drew the blade across the base of the skull, then finished at the other ear.  From the forehead back, he peeled the scalp away and held it up before his father.  He’d done well.  Now he felt the pride.

When it was finished, the war party gathered.  They left the clearing, left their enemy unburied, left the bodies and pieces of bodies to be eaten by the scavengers of the forest.  In the stories the Anishinaabeg would tell of this battle, they would call the clearing Miskwaa-mookomaan—Red Knife—for the color that flowed across their blades on that triumphant autumn morning.

Two hundred years later, on that same bloody acre, the citizens of Tamarack County, Minnesota, would build a school.

Hell, I don’t need to sleep. 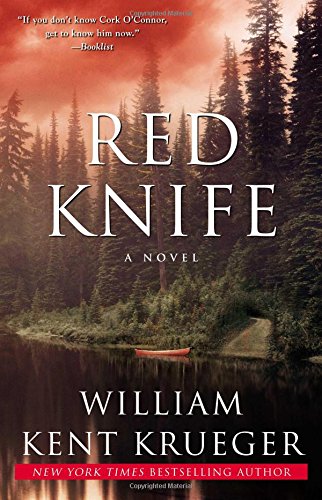