I downloaded and read C.C. Humphreys’ short story about the birth of his 18th Century hero Jack Absolute. Enjoyed it, of course, as I knew I would. Humphreys crowds a great deal into fewer than 30 pages. The action swirls around the Battle of Dettingen in Germany in 1743, during the War of Austrian Succession. James Absolute is a cavalryman who has just learned that his lover Jane Fitzsimmons is about to give birth in London. Jane is an actress, and threatened by ruin. In the first scene, she takes the stage to sing a ballad that suits her circumstances, entitled “Following The Drum.”

This, of course, was a rabbit hole I could not resist diving down. The song is an authentic 18th Century piece depicting the life of a camp follower. In that era, European armies moved with a long train of laundresses, wives, and prostitutes, many of whom also served in a pinch as nurses. They were, quite literally, following the drum. 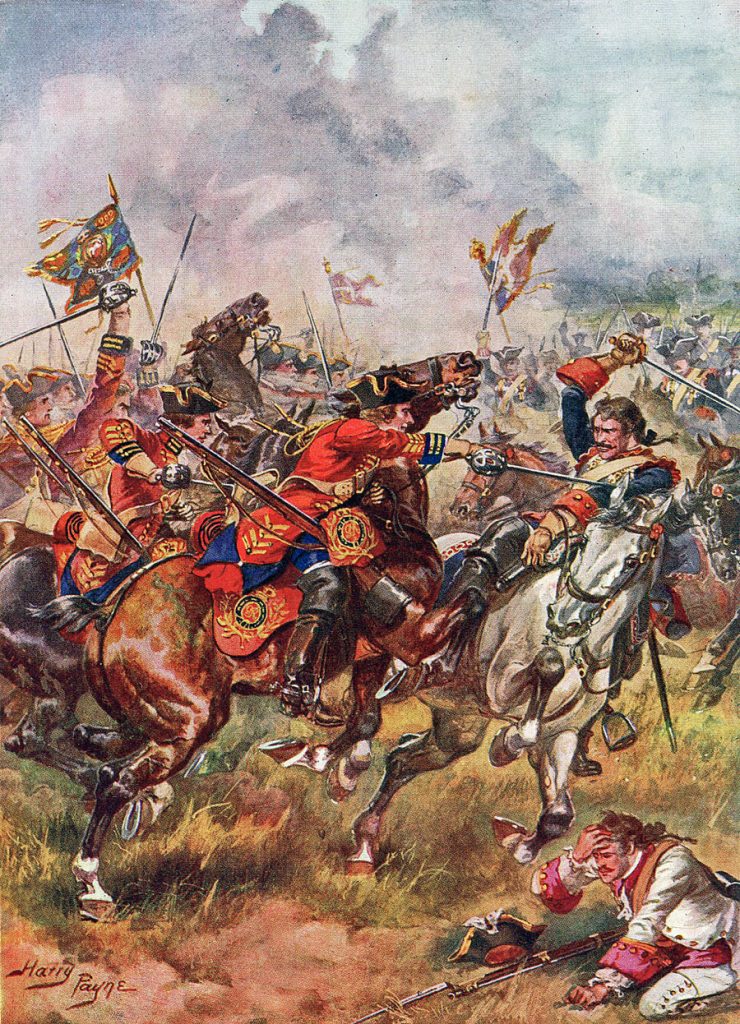 James Absolute fought as a dragoon in the Battle of Dettingen. The battle is depicted in C.C. Humphreys’ new (and free) short story “The Birth of Jack Absolute.”

Oh once I slept on a feather bed

On a cloak that’s old and torn

So sing with me a merry catch

As summer days will come

And my hose are torn

Oh once I ate from a silver plate

With sauces rich and rare

Now I’m glad if I’m not too late

Oh sup with me on a scraggy fowl

And dream of sugar plums

And my hose are torn-

Oh once I wore a silken shawl

And a bonnet of ribbon trim

Now I’m glad if I’m clad at all

‘Twixt my ankles and my chin.

Oh sew with me in a sturdy stitch

And do not prick your thumb

I’m lame and tired before my time

Oh I’m lame and tired but still I smile

The quest for a rendition of the song led me to a Hulu original entitled Harlots. Looks quite intense…

London in 1763 is booming, and one in five women makes a living selling sex. Women’s opportunity for economic advancement is to marry well or be a prostitute. The city’s brothels are run by canny, cruel businesswomen such as Margaret Wells and Lydia Quigley. The prostitutes are reviewed in Harris’s List of Covent Garden Ladies, which some of the women are seen reading in the premiere episode.

But there is a new morality in the air as religious crusaders demand the closure of brothels, and the constables are happy to launch brutal raids.[1]

Episodes revolve round Mrs Wells’ determination to improve her life and fortune by moving her brothel to Greek Street in Soho and serve a better class of Georgian society. To finance the move, after receiving a £100 fine, she auctions the virginity of her younger daughter Lucy as she had done before with her older daughter Charlotte when she was 12 years old. Charlotte is the lover of the besotted Sir George Howard, who wants her to sign a contract with him that makes him her “keeper.”

Margaret’s move to Greek Street puts her into conflict with Lydia Quigley, for whom she had previously worked as a prostitute. Lydia Quigley operates a high class brothel in Golden Square, serving rich, highly influential people in the judiciary and police, and blackmails a religious reformer into opposing Margaret.

This London was not the frontier, obviously; it was the metropole of an Empire that pushed out its frontiers across North America, Oceania, South Africa, South Asia… It is  strange mixture of extraordinary bravery and gallantry and the birth of high ideals and explosive material improvement, side-by-side with the sordid, exploitative and downright grotesque. And endlessly fascinating…