My long-range recon in Southern Africa continues to kick up characters and stories that satisfy my wayward Frontier Partisans soul right down to the soles of my veldskoen. I am, at the moment, immersed in the dastardly deeds of derring-do of a gang of ne’er-do-well banditti known across the veld as “The Irish Brigade.” Of them you will doubtless hear much — at some later time. First I must tip the broad-brimmed hat to a better man — a man historian T.V. Bulpin described as “one of the best-liked of all the early wanderers of the wilderness of Southern Africa.” 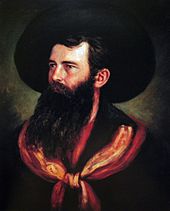 I had actually encountered Baines’ paintings before, but I had never picked up on the name or on the adventurous life he lived out on the frontier. Born in Kings Lynn in 1820, he first came to the Cape as a 22-year-old.

“Of adventurous disposition, he mingled with adventurers, and the pictures he painted in the course of his travels are amongst the finest mementoes Southern Africa has of the days of frontiersmen and ivory hunters.” 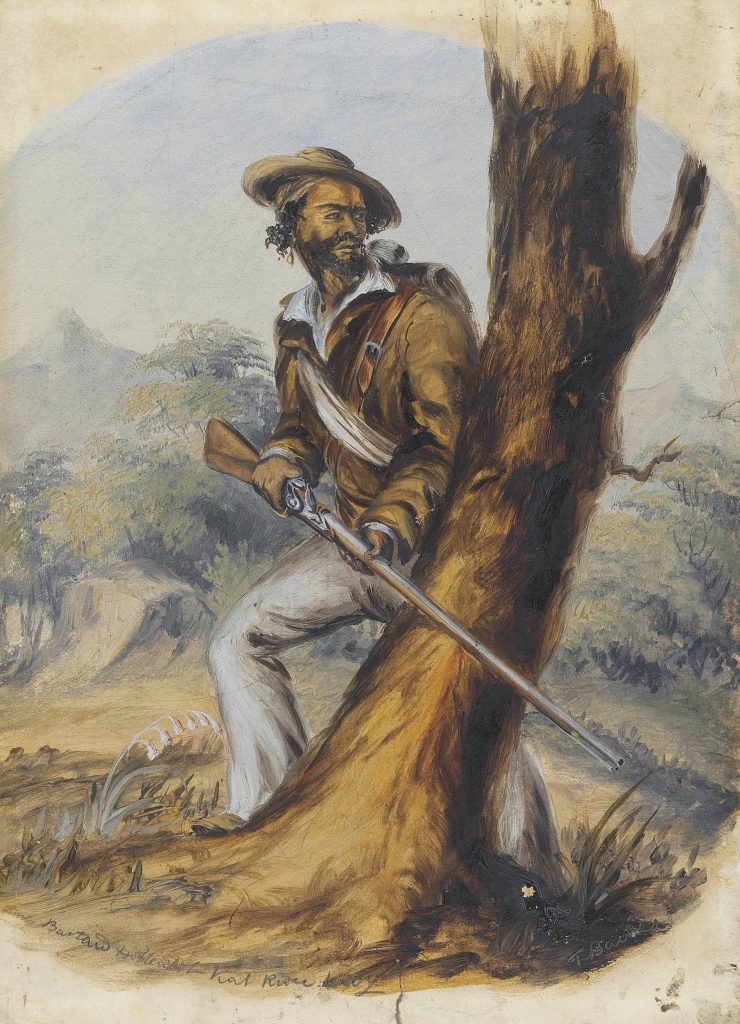 A Khoikhoi irregular of the Cape Frontier Wars. 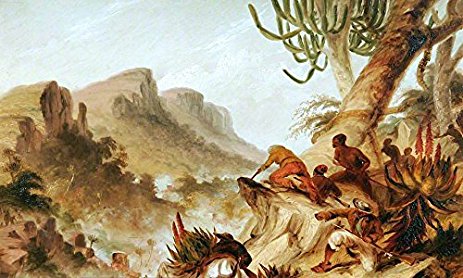 Combat in the Eastern Cape. 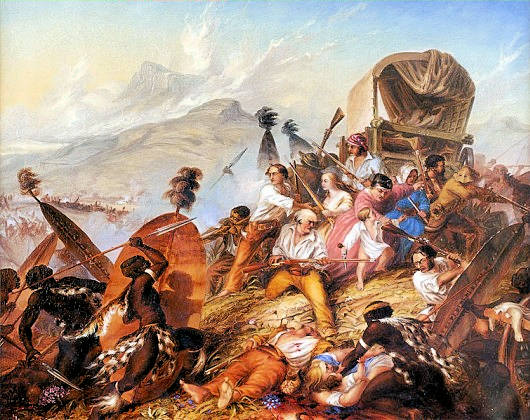 Baines attached himself to several exploring expeditions, including one to Australia. But his great passion was the Southern Africa interior, which he captured in much the same way Alfred Jacob Miller recorded the lives of the Mountain Men of the Rocky Mountain Fur Trade. But while Miller spent only a season in the mountains, Baines made his life and his living on the Southern African Frontier.

Accompanying Dr. Livingstone, he was one of the first white men to see Victoria Falls. And in 1869, he led a prospecting expedition into Mashonaland — part of the future Rhodesia, now Zimbabwe.

Well-liked by everyone he met, Baines was trusted by the Ndbele (Matabele) king Lobengula, who granted him a concession on what became known as the Northern Goldfields. Baines never lived to find his fortune. The company he helped to float to exploit the goldfields fell apart in a welter of financial woes. While on a trip to Durban, Natal, in May 1875 to raise funds for a small crushing plant to operate on his own, he died of dysentery.

“He was a man to whom the wilderness brought gladness and the mountains peace.”

And his paintings are a greater treasure than any fabled Ophir could contain. 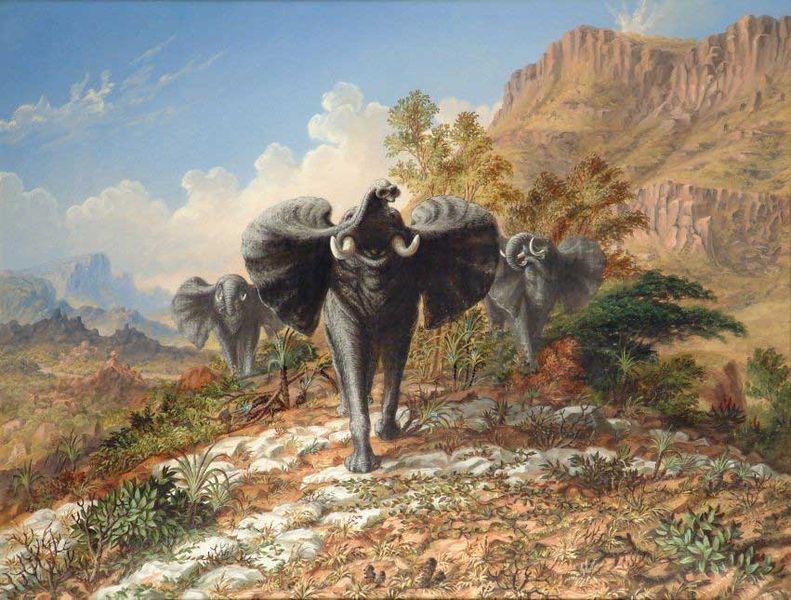 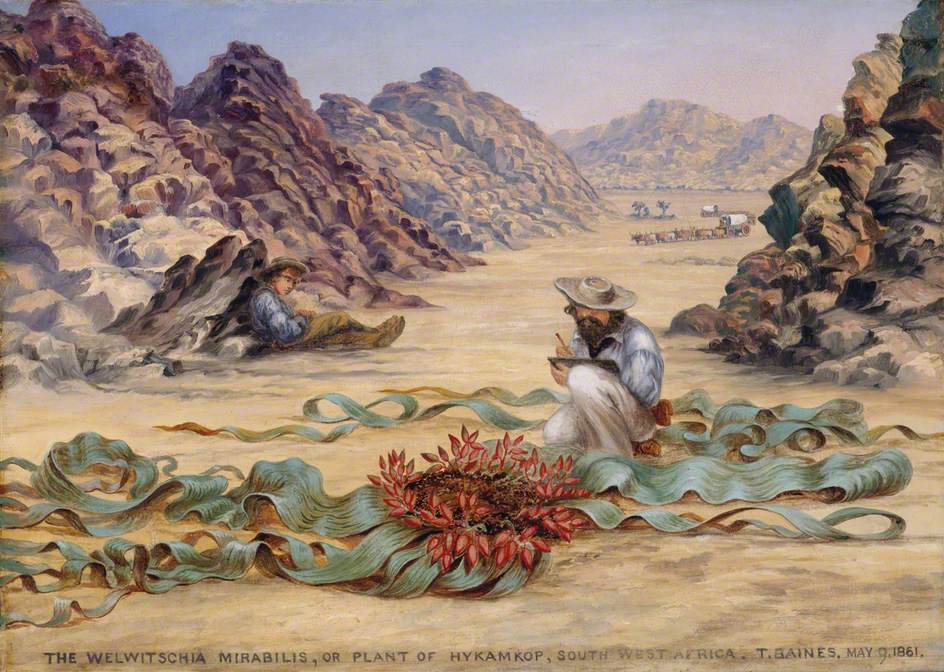 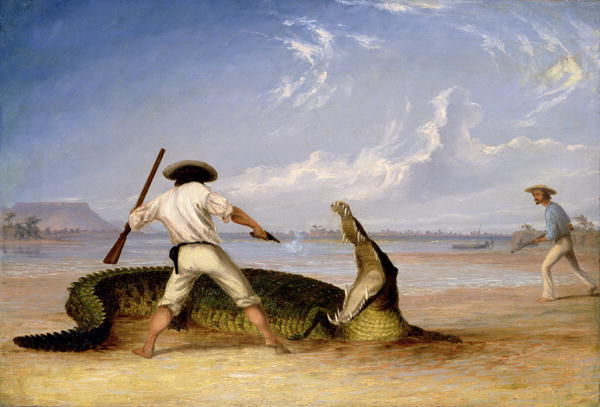 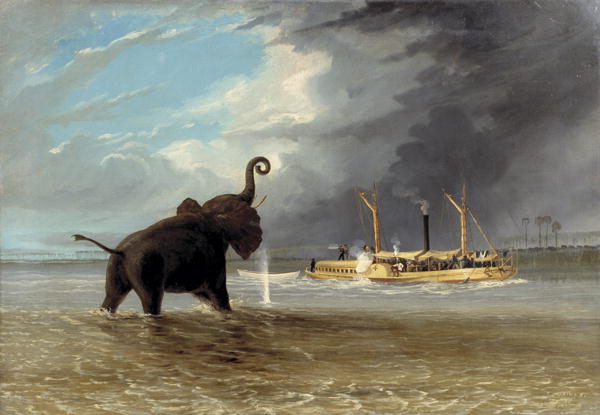 The “MaRoberts” and an Elephant in the Shallows — Lower Zambezi, 1859.