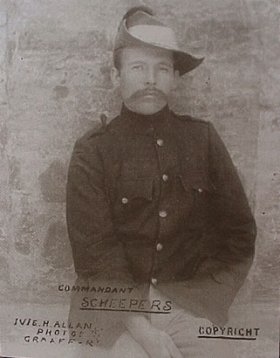 The Boer War was a dirty war.

After a series of initial conventional victories over the British forces in late 1899, the forces of the Transvaal Republic and the Orange Free State were defeated and broken. The British captured the Transvaal capital of Pretoria in June of 1900 and thought that for all intents and purposes the war was over. They were very, very wrong.

The Boers, descendants of Dutch settlers in South Africa, were horsemen and riflemen of consummate skill. They readily reverted to guerrilla warfare, where their mobility across the vast and wild terrain of South Africa gave them tremendous advantages over the rail-bound British forces.

In frustration, the British under Lord Horatio Kitchener determined to drain the sea in which the guerrilla’s swam, emptying the veld, burning farmsteads and herding the commandos’ families into concentration camps where 26,000 — many children — would die of disease and malnourishment.

In an effort to take the pressure off the two Republics, Boer commanders determined to raid into the Cape Colony. They hoped to open another front — and perhaps to rouse a rebellion among the Cape Boers, who remained under British government. The raids, which started in December 1900, slashed through the spectacular and rugged landscape of the Karoo, hitting British towns and outposts. The Commandos sustained themselves on captured stores and stayed in the saddle constantly, eluding British patrols and columns sent to intercept them. It was extremely tough campaigning, but the Commandos proved to be among the most brilliant cavalry raiders in history.

Among them was a 23-year-old Commandant named Gideon Scheepers. 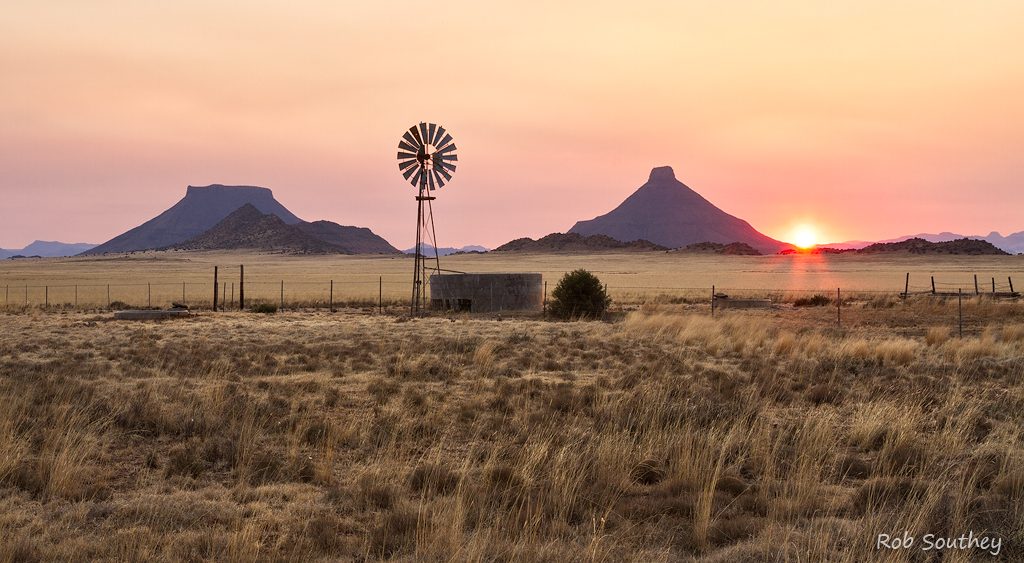 The Karoo remains a wild and magnificent country, much resembling the outback of the Great Basin in the American West. Photo by Rob Southey. 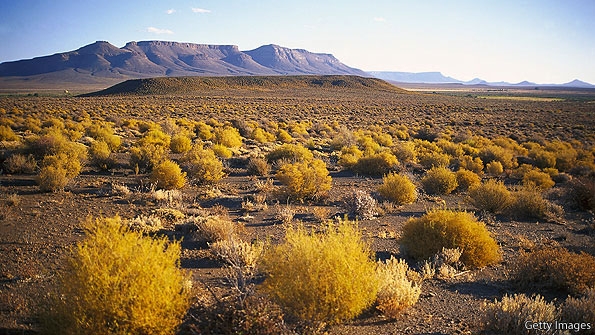 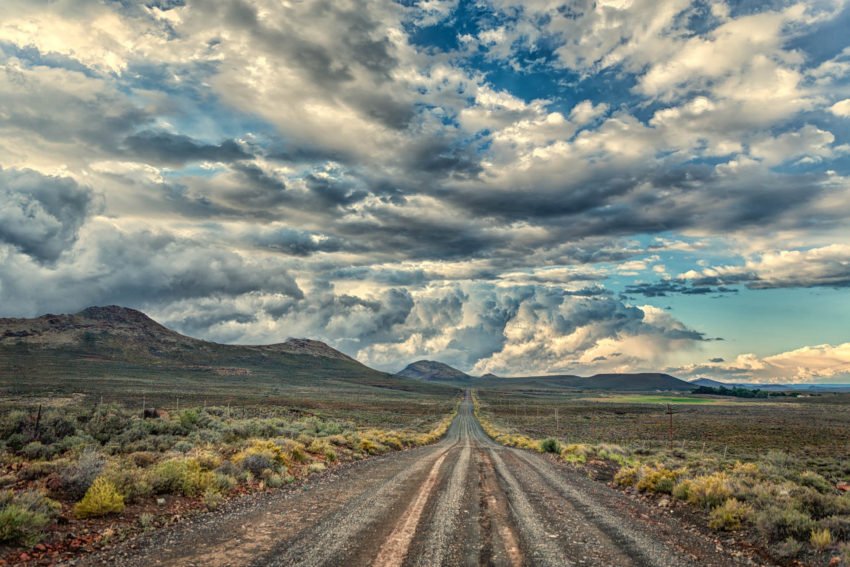 Scheepers was born and raised in the Transvaal and served as a heliograph operator in the State Artillery, the most regularized branch of service in the Boer nation-in-arms. in 1898, he was seconded to the Transvaal’s sister republic, the Orange Free State, and was promoted to sergeant. He served under the outstanding Boer General Christiaan DeWet, who deployed him as a scout and eventually made him captain of a recon force.

His skills as a scout would serve him well on his raid into the Cape Colony. He crossed the Orange River riding with Commandant P.H. Kritzinger and quickly earned notice for his skill in recruiting Cape Rebels. This was no easy task, for though they were certainly sympathetic with their brethren from the Republics, joining theme was an act of treason against the Crown punishable by hanging. So successful was he that when Commandant Kritzinger re-crossed the Orange after an eight-week campaign, Scheepers, now a Commandant himself, stayed in the Cape at the head of a Commando of 150 hard-bitten men, whose only unit insignia was a white puggaree band on their slouch hats.

The “Witkoppen” marauders raised hell across the Karoo, burning and pillaging, derailing trains and raiding supply depots. Scheepers was unquestionably a brilliant raider. He was also a very hard man. His Commando executed some 30 black men they captured under arms, serving as spies and scouts for the British. They flogged any number of others. The war had started with a kind of gentleman’s agreement that it would be a “White Man’s War,” but by this stage Kitchener was arming any blacks willing to fight, regardless of what the War Office thought about the practice.

The Boers were enraged. They were as fearful of a black uprising as were the slaveholders of the Old South, and their response was brutal. So, too, was their treatment of any Boer found scouting or working for the British. Such traitors, as the commandos considered them to be, were often shot down like dogs as well.

In September 1901, Scheepers fell ill — possibly with appendicitis. The illness became so debilitating that his Commando had to leave him behind. The British captured him on his sickbed in a farmhouse. He was transported to a prison in the town of Graaff-Reinet. When he had recovered sufficiently, he was court martialled on multiple charges for what we would now call war crimes: 7 counts of murder, 1 of attempted murder, 1 that he placed a prisoner in the enemy’s line of fire, 1 of maltreatment of a POW, 3 of assault, 2 of malicious injury to property and 1 of arson (15 incidents). 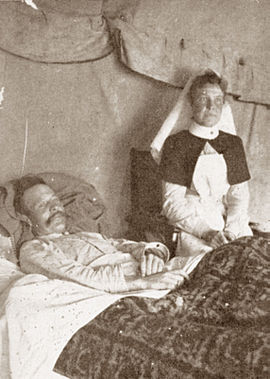 Scheepers’ defense was that he was acting under orders, and that the men he killed were executed legitimately as spies. He was convicted and sentenced to death. There was widespread opposition to the sentence. The U.S. House of Representatives even weighed in with a resolution condemning it. The British — sick to death of this grinding, inglorious war — were unmoved. For them, and for Cape loyalists, Scheepers and the Boer Commando raiders were no better than bandits.

On January 18, the young Commandant was marched out into the Karoo veld and tied to a chair, just like Breaker Morant, and blown into eternity by a firing squad. 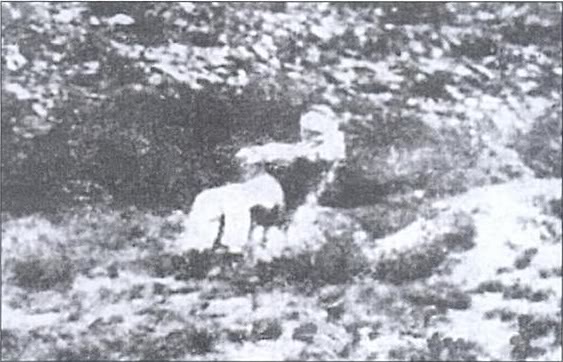 A photographer caught the moment of Gideon Scheepers’ death.

The British buried him on the spot. Then, deciding that the execution ground might become a shrine for Cape Rebels and a focal point for Boer sympathizers, troopers exhumed Scheepers’ body in the midst of a booming South African thunderstorm. They allegedly carried the body off toward a small river and reburied it. When the war ended a few short months later, Gideon’s parents traveled to Graaff-Reinet to retrieve his remains. They were horrified to find his grave empty and the location of their boy’s bones unknown.

His mother never gave up hope of finding Gideon’s remains, and for years after the Union of South Africa was formed, a reward was offered for their retrieval — which only brought out frauds and crooks. Scheepers’ mother died in 1956 and his bones remain lost on the veld. A memorial was constructed near the execution site to honor a man most Afrikaners considered a hero. 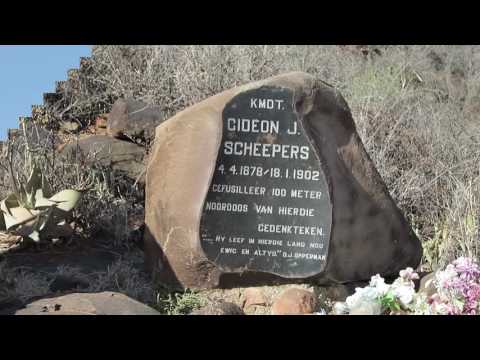 The tragic image of a mother’s never-ending search for her son’s bones inspired a well-known South African poem:

But so many bones lie under the rosemary…
Bless, Lord, all the pale bones of the struggle –
I know as mother after half a century of pain:
one country full of skulls and bones, one big tomb
across which Your north wind blows the dry thistle
and fills creek and crag with intermittent shrieks of
the vulture, the wild dogs and the crow
– that we as one great nation in this rough country
with every piece of corrugated iron and every wheel,
and white and brown and black foil behind clear glass
forever capture Your sunlight and shine it for one another.
– DJ Opperman: Prayer for the Bones, translation Margriet Engel