“August 1780 was one of the blackest months of the Revolution. Charleston had fallen to the British in the second largest surrender of American forces in history. General Horatio Gates, the Hero of Saratoga, was sent to the rescue. He rushed south to the Battle of Camden where he was crushed by General Lord Cornwallis. The defeat was so complete…Georgia and South Carolina appeared to be firmly in British control and it seemed to be only a matter of time before North Carolina and Virginia fell….” (Simpson) 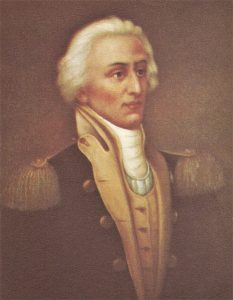 A remarkable frontier partisan leader was engaged on a mission before the battle began at Camden. Colonel Francis Marion led South Carolina patriot militia troops – but also was a commissioned Continental Army officer. Gates assigned Marion and his rag tag militia with a mix of Continentals to burn boats on the Santee River in South Carolina, aiming to cut off the British from their supply base in Charleston; and preventing them from retreating southward as the Continental Army faced the British at Camden.

Sending troops under Colonel Peter Horry down river with the same assignment, Marion began carrying out Gates’ orders: “his troops zealously destroying canoes and burning flatboats; determined that no redcoat should escape destruction at Camden.” As they proceeded, Marion got word of the disaster: Gates’ Continentals had been smashed at Camden. And shortly thereafter, British Cavalry officer Banastre Tarleton had routed Patriot militia at Fishing Creek. “Tarleton’s green horsemen had cut the…defenders to pieces, bagged the survivors, and rescued the prisoners.” (Bass)

Marion concealed the news from his officers and troops, and continued marching upriver. Learning that the British held Continental Army prisoners nearby, Marion moved up in the night, skirmished with the British, and freed 150 troops of the Maryland Line. Sixty-five joined Marion; and he marched his now 150 man unit into camp. Marion’s report to Gates had a dramatic impact. With the situation in the South at a low ebb, “Marion’s brilliant exploit cheered a drooping Congress.” And American newspapers touted the victory.

“For the first time patriots from Maine to Georgia read the name of Francis Marion.” (Bass)

So began a notable period of mounted guerrilla warfare carried out by Marion and his men. Marion had learned from the tactics of the Cherokees that he’d fought as a militia lieutenant in 1761. For Marion retreated to campsites in the swamps along the Santee, Black, Peedee, and Lynches Rivers – sites that the British, unfamiliar with the watery terrain, could not penetrate. Among many, his favorite site was Snow’s Island on the Lynches.

• Marion’s militia was made up of locals. They knew the areas of operation and could function in the swamp environments.
•  Basically, they jumped out of a swamp, attacking unexpectedly.
•  Marion attacked camps at the crack of dawn; after having advanced so quietly that he was not detected. (This he learned from the Indians.)
•  Marion’s attacks were lightning quick.
•  After the attack, they always disappeared.

William Simpson of the Virginia Society, Sons of the American Revolution, describes Marion’s mode of operation:

Marion “kept out constant patrols to provide early warning. When these patrols reported an enemy in the area, Colonel Marion would wait until dark, when he would break camp and move swiftly under the cover of darkness to a safer position. However, if the foe was careless, these swift night marches would end before dawn in devastating attacks on the unsuspecting enemy. When threatened with overwhelming force,” Marion “would dissolve his force and fade into the swamps. However, as soon as the enemy let down their guard, they would rapidly reassemble and conduct devastating counter attacks.”

Many times after a success more volunteers rode into Marion’s camp. In two major skirmishes in early September 1780 he broke “the power of the Tories east of the Peedee.” The cost: four men wounded, two horses killed. The next day, “sixty volunteers rode into camp”, doubling his strength. And it wasn’t just Marion’s militia.

“The rise in…successes among partisans was reflected in the numbers of back country fighters who reported in militia units and participated in battle….” (Swisher)

Constant harassment! Cut the supply lines; obstruct the movement of troops; and keep Loyalist militias off balance and on the defensive. Marion drove the British crazy. Cornwallis wouldn’t “march north with Marion across his supply line. He dispatched…the British Legion of Tarleton…to disperse Marion, setting up one of the most famed encounters in Colonial partisan history.”

For, after Marion avoided a Tarleton trap, Tarleton pursued — for seven hours! Then “the rebels disappeared suddenly into Ox Swamp. Tarleton drew rein, and staring into the trackless morass, called off the chase, muttering, ‘As for this damned old fox, the devil himself could not catch him.’ From this oft-repeated statement…the ‘Swamp Fox’ was born.” (Swisher) 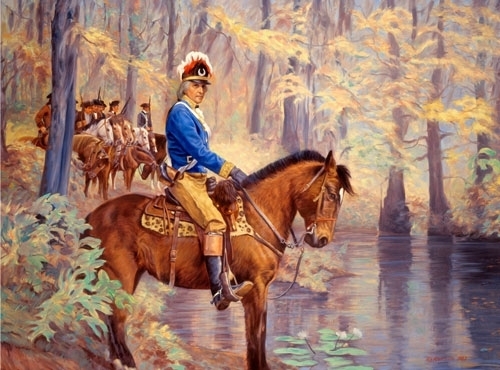 The partisan war raged in the last four months of 1780. The “British armies absorbed heavy losses in almost constant encounters with back country partisans. Every supply column, every payroll delivery was contested. More than 1,200 British soldiers were killed or wounded and…1,286 captured..” The glorious victory over British officer Patrick Ferguson’s Tory militias at King’s Mountain was achieved by the Over the Mountain Men in October 1780.

The guerrilla warfare of Marion and other partisan militias kept the American patriots with a fighting chance as 1780 turned to 1781. When Daniel Morgan’s troops carried out his “tactical masterpiece” victory over Tarleton at the Cowpens in January 1781, the tide was turning for the Americans.

Marion, by now a general, commanded the militia at the Battle of Eutaw Springs on September 8, 1781. In conventional warfare under Nathaniel Greene, “Marion’s militia fired seventeen rounds” while advancing on the British lines. “Then with ammunition exhausted, they retired in good order, leaving the fighting to…Continentals.” “In his greatest battle,…the men he had trained fought like professionals. His coolness and bravery had animated them.” (Bass) Technically a British victory, Eutaw Springs was the end for the British in the deep South as their army was shattered.

Twenty days later combined American and French forces laid siege to Cornwallis at Yorktown, Virginia. Cornwallis’ surrender on October 19th was the decisive Patriot victory. “With the capture of more than 7,000 British soldiers, negotiations between the United States and Great Britain began.” (Wiki) At long last the British withdrew from Charleston under a flag of truce on December 14, 1782. “The South Carolina militia were disbanded here and there in swamp or on muster field,…ragged, hungry, and unpaid, to find their way home.” “General Marion held his final muster. …He thanked the men who had followed him to victory, praising their gallantry, courage, and patriotism and wishing them happiness and prosperity.” (Bass)

The Revolutionary War was won.

© 2017 by Rick Schwertfeger, used by permission.