(Note: This story originally ran in the November 27 edition of The Nugget Newspaper in Sisters). 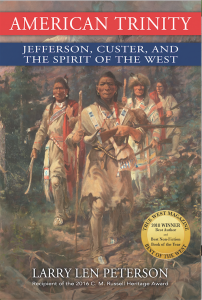 When Larry Len Peterson sent his 600-page historical study “American Trinity: Jefferson, Custer, And The Spirit Of The West” out into the world, he had no idea what the response would be. It’s a challenging book, employing history, science, philosophy and theology in an in-depth exploration of the fraught history of race relations between European-Americans and native peoples.

As it turns out, Peterson’s magnum opus has struck a powerful chord.

In its year-end Best of the West collectors edition released last week, True West Magazine rated Peterson Best Author and “American Trinity” as non-fiction book of the year. The book rose to the top among 600 or so books submitted for review each year to the attention of the highly respected scholar of the West, Stuart Rosebrook. Only five books make the cut per issue of the magazine.

The signal honor puts Peterson in the company of the most respected scholars in the field of the history of the American West, such as T.J. Stiles and Paul Andrew Hutton.

”This is a big deal in my life,” Peterson told The Nugget. “Probably the biggest. And I’ve had the good fortune to have some things go right – but nothing like this.”

Peterson, an award-winning physician and scientist of dermatology, has already won renown for his extraordinary coffeetable books on Western artists Charles M. Russell and Phillip R. Goodwin. “American Trinity” is a different kind of book – one whose window on the frontier shows something darker than the magnificent landscape and romantic ideas of cowboys and Indians portend.

”American Trinity” emphasizes the tragic history of American Indians, while connecting their treatment to other cultures in prior centuries such as the Jews, enslaved Africans, and beleaguered Christians.

Peterson, in the words of his editor, set out to “challenge views without demanding that you change yours.” He is not grinding an ideological ax – but he is facing up to some difficult history. A man of deep faith, Peterson wrestles with the role religion played in justifying conquest and the stripping of culture away from native peoples. A doctor and a man of science, he grapples with the use of “scientific racism” to rationalize oppression.

In regards to the role of the church, Peterson notes that “there is the church of Jesus and what he said,” which distills down to the Golden Rule – do unto others as you would have them do unto you. “Then there’s the church of Paul,” Peterson says. “Paul is really the basis of religion.”

Fundamentally different spiritual outlooks were part of the conflict between European-Americans and Indians.

Medicine, too, was used almost as a weapon against the native peoples.

”I think it’s kind of like religion,” Peterson said. “Any tool can be used for good or bad.”

While he looks unflinchingly at the sins of the West and the evils perpetrated on native peoples, Peterson is careful and thorough in providing context. He notes that Thomas Jefferson is often judged harshly for extolling profound ideals of freedom while owning slaves and taking land from Indian nations.

”I tend not to be too judgmental about somebody like Jefferson,” he told The Nugget. “We’re all cultural beings.”

If we’re honest, we have to acknowledge that if we were in the shoes of our ancestors, growing up in a slave society that regarded Indians as uncivilized people and the land as “empty,” we would likely have behaved much the same as they did.

The purpose of “American Trinity” is to seek an honest reckoning, not to impose a point of view or instill feelings of guilt. In a sense, though it is a hard look backward, it is really aimed at the future.

In an earlier review of “American Trinity,” Rosebrook wrote: “At the heart of Peterson’s magnum opus on the American West is his search for the historical meaning and a record of race relations between European-Americans and the Native peoples of North America – and how a truthful reckoning of the past can provide clarity for an improved collective future.”

The scope and scale of “American Trinity” is immense, but the book is nevertheless quite accessible. It was designed that way, to be read in chunks, not necessarily from beginning to end in one shot. And it rewards multiple readings.

”Those 27 chapters are individual studies and they stand alone,” Peterson said. “It’s not a timeline.”

Peterson will share a discussion of the themes of his book at Paulina Springs Books in Sisters on Saturday, December 9, at 6 p.m.