To one Duncan Campbell it came in a dream
That he’d meet his fate where he never had been;
Where the blue waters roll and the stickerbush tear,
It’s “Travel well, Duncan, I’ll wait for you there.” 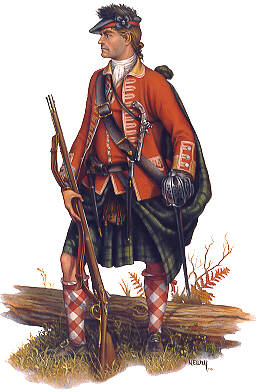 I guess I just can’t resist a spooky story. It’s not even October anymore, and I can’t stop. What I get for spending so much time amongst the Celts, eh Deuce? Oh, aye, this is a Highland ghost story, one with tremendous frontier resonance.

On July 8 1758, at the height of the French & Indian War, the British Army in North America attacked the strategically vital French fortification called Fort Carillon located smack in the middle of the chain of lakes that made for a military highway between French Canada and the British colonies of New York and New England. The British and the local Indians knew the place as Ticonderoga.

The British General, James Abercromby, was a great organizer and logistician — and a lousy, vacillating and uncreative battlefield commander.

Rogers Rangers and British light infantry pushed forward and made contact with some French skirmishers, giving better than they got.

Then, in a scene that grotesquely resembles the slaughter of the British Army at the Somme in 1916, Abercromby sent his troops headlong into a well-defended position, fortified with a tangle of downed trees and abbatis. Wave after wave of heartbreakingly brave British troops were hung up in the obstacles and mowed down by sheets of musketfire. The Indian allies of the British were not interested in this kind of warfare. They contented themselves with hunkering down on the slopes of nearby Rattlesnake Mountain and taking ineffectual potshots

They were wise to stay out of it. The attacks, unsupported by artillery, failed bloodily and utterly.

The unit that suffered the worst in this mindless slaughter was the 42nd Highlanders (Black Watch). Only 12 years after the Battle of Culloden and the crushing of the Highland Clans, the 42nd was carrying on the proud Highland warrior tradition — in the service of the Empire. They suffered 50 percent casualties. All told, about 1,000 men died before the ramparts of Carillon. 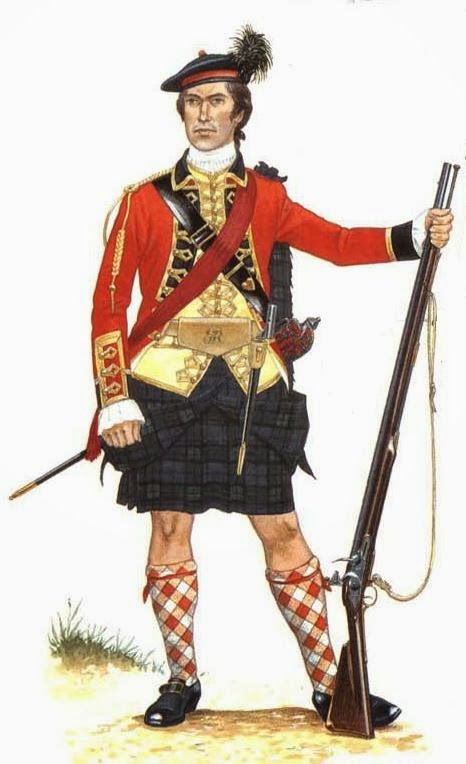 An officer of the Black Watch.

The attack began a little past one in the afternoon, and about two the fire became general on both sides, which was exceedingly heavy, and without any intermission, insomuch that the oldest soldier present never saw so furious and incessant a fire. The affair at Fontenoy was nothing to it: I saw both. We laboured under insurmountable difficulties. The enemy’s breast-work was about nine or ten feet high, upon the top of which they had plenty of wall-pieces fixed, and which was well lined in the inside with small arms. But the difficult access to their lines was what have them a fatal advantage over us. They took care to cut down monstrous large oak trees which covered all the ground from the foot of their breast-work about the distance of a cannon-shot every way in their front. 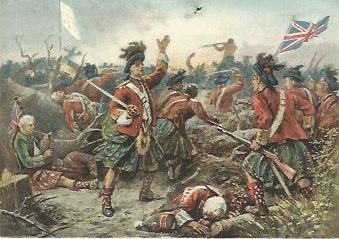 The 42nd Highlanders were slaughtered before the ramparts of Fort Carillon at Ticonderoga.

This not only broke our ranks, and made it impossible for us to keep our order, but put it entirely out of our power to advance till we cut our way through. I have seen men behave with courage and resolution before now, but so much determined bravery can hardly be equalled in any part of the history of ancient Rome. Even those that were mortally wounded cried aloud to their companions, not to mind or lose a thought upon them, but to follow their officers, and to mind the honour of their country. Nay, their ardour was such, that it was difficult to bring them off. They paid dearly for their intrepidity. The remains of the regiment had the honour to cover the retreat of the army, and brought off the wounded as we did at Fontenoy. When shall we have so fine a regiment again? I hope we shall be allowed to recruit.

One death was especially eerie.

Major Duncan Campbell of the Black Watch was Laird of Inverawe. During the assault, his arm was shattered by a musketball. A .69 caliber soft lead ball from a French musket crushed and smashed bone, sending splinters into the surrounding flesh and almost assuring the development of gangrene. Campbell lingered for nine days after the amputation of his shattered arm, then died.

According to legend, the death had been mysteriously foretold.

Back in Scotland, years before, Campbell, Laird of Inverawe, had offered sanctuary to a man who had accidentally killed another. Unbeknownst to Campbell, the dead man was his own cousin. The ghost of Campbell’s kinsman came to him at night, intoning:

“Inverawe! Inverawe! Blood has been shed. Shield not the murderer!”

But Campbell had already offered sanctuary, and, to a Highlander, an oath and the duty of hospitality could not be set aside. He attempted a dodge, hiding the killer in a cave. The ghost of his kinsman was not having it. Again he visited Campbell.

“Inverawe! Inverawe! Blood has been shed. Shield not the murderer!”

Campbell returned to the cave. The killer was gone.

A third time he was visited by his kinsman’s spirit. This time, the spectre spoke in a tone full of sadness and doom.

“Farewell, Inverawe! Farewell, till we meet at TICONDEROGA!”

Campbell had never heard the strange word Ticonderoga, and would not hear it until he joined the Black Watch — and was deployed to North America. When the 42nd got their marching orders for the place called Ticonderoga, Major Campbell knew he was marching to his doom. And, like a good Celt, march he did. And died.

Back in Scotland, two women of Inveawe saw a spectral battle in the stormy summer sky. It was July 8, 1758.

Such a tale must, of course, become a folk ballad. Rich Nardin wrote it, and it has since been recorded by many artists.

I’ll tell it to you as the told it me,
By the glow of the campfire burning-
By the banks of the water, where we sported and played,
They once faced the fury of battle.

And up to the Champlain came the Highland Brigade,
The pipes and the drummers, playing Scotland the Brave.
But when they sailed home, the pipers’ refrain
Was, “Oh, how cruel the volley.”

To one Duncan Campbell, there came it a dream
That he’d meet his fate where he never had been-
Where the blue waters roll and the stickerbush tear,
it’s “Travel well, Duncan, I’ll wait on you there,
For the French and the Indian have challenged our king.”
To a soldier like Duncan, no need to explain-
“‘Tis many a time I’ve traveled the waves
To find my fate in the fire.”

From Fort William Henry, the boats have shoved off
To the north of Lake George in the morning,
To a place the Frenchmen call Carillon,
And the Indians Ticonderoga.
And the words struck Duncan like a thunderbolt there,
Everyone knew of the warning:
“So give us a tune to remember me by,
For tomorrow I’ll not be returning.”

When the gunpowder flashed, the Highlanders died,
Never again to walk the hillside.
In the wilderness green, in the sun and the rain,
It’s here they’re forever remaining.

And I’ve told it to you as they told it to me,
Of one Duncan Campbell and the Highland Brigade-
Where the campfire crackles in the summertime’s wane,
Through the mist on the water, comes the pipers’ refrain.

Previous Post: « Fire Along The Sky — The Frontier Novels Of Robert Moss
Next Post: The Hinge Of Fate In The North Woods — The Combat Death Of Lord George Howe »