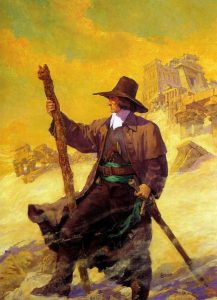 Deuce Richardson pointed out that — in our Frontier Partisans mythical universe at any rate — Thomas Morton, founder of Merrymount, might well have known of a certain Puritan adventurer who called Devon “his place.” That would be Solomon Kane, whose strange wanderings were recounted by Robert E. Howard in the pages of Weird Tales in the late 1920s and early ’30s.

Kane was a restless wanderer, driven by a compulsion to pursue evil and destroy it. Or perhaps that was merely the frame in which his fanatical Puritan’s world view required for what was no more than a feverish thirst for adventure. He was probably mad. He was a Sea Dog and spent some time in the dark, haunted forests of Germany, but, like so many half-cracked Englishmen, he was fatally attracted to the wilds of Africa and it is there that his weirdest and most dire adventures occurred.

The white gulls wheeled above the cliffs, the air was slashed with foam,
The long tides moaned along the strand when Solomon Kane came home.
He walked in silence strange and dazed through the little Devon town,
His gaze, like a ghost’s come back to life, roamed up the streets and down.

The people followed wonderingly to mark his spectral stare,
And in the tavern silently they thronged about him there.
He heard as a man hears in a dream the worn old rafters creak,
And Solomon lifted his drinking-jack and spoke as a ghost might speak:

“There sat Sir Richard Grenville once; in smoke and flame he passed.
“And we were one to fifty-three, but we gave them blast for blast.
“From crimson dawn to crimson dawn, we held the Dons at bay.
“The dead lay littered on our decks, our masts were shot away.

“We beat them back with broken blades, till crimson ran the tide;
“Death thundered in the cannon smoke when Richard Grenville died.
“We should have blown her hull apart and sunk beneath the Main.”
The people saw upon his wrist the scars of the racks of Spain.

“Where is Bess?” said Solomon Kane.“Woe that I caused her tears.”
“In the quiet churchyard by the sea she has slept these seven years.”
The sea-wind moaned at the window-pane, and Solomon bowed his head.
“Ashes to ashes, dust to dust, and the fairest fade,” he said.

His eyes were mystical deep pools that drowned unearthly things,
And Solomon lifted up his head and spoke of his wanderings.
“Mine eyes have looked on sorcery in dark and naked lands,
“Horror born of the jungle gloom and death on the pathless sands.

“And I have known a deathless queen in a city old as Death,
“Where towering pyramids of skulls her glory witnesseth.
“Her kiss was like an adder’s fang, with the sweetness Lilith had,
“And her red-eyed vassals howled for blood in that City of the Mad.

“My feet are weary of wandering and age comes on apace;
“I fain would dwell in Devon now, forever in my place.”
The howling of the ocean pack came whistling down the gale,
And Solomon Kane threw up his head like a hound that sniffs the trail.

A-down the wind like a running pack the hounds of the ocean bayed,
And Solomon Kane rose up again and girt his Spanish blade.
In his strange cold eyes a vagrant gleam grew wayward and blind and bright,
And Solomon put the people by and went into the night.

A wild moon rode the wild white clouds, the waves in white crests flowed,
When Solomon Kane went forth again and no man knew his road.
They glimpsed him etched against the moon, where clouds on hilltop thinned;
They heard an eery echoed call that whistled down the wind. 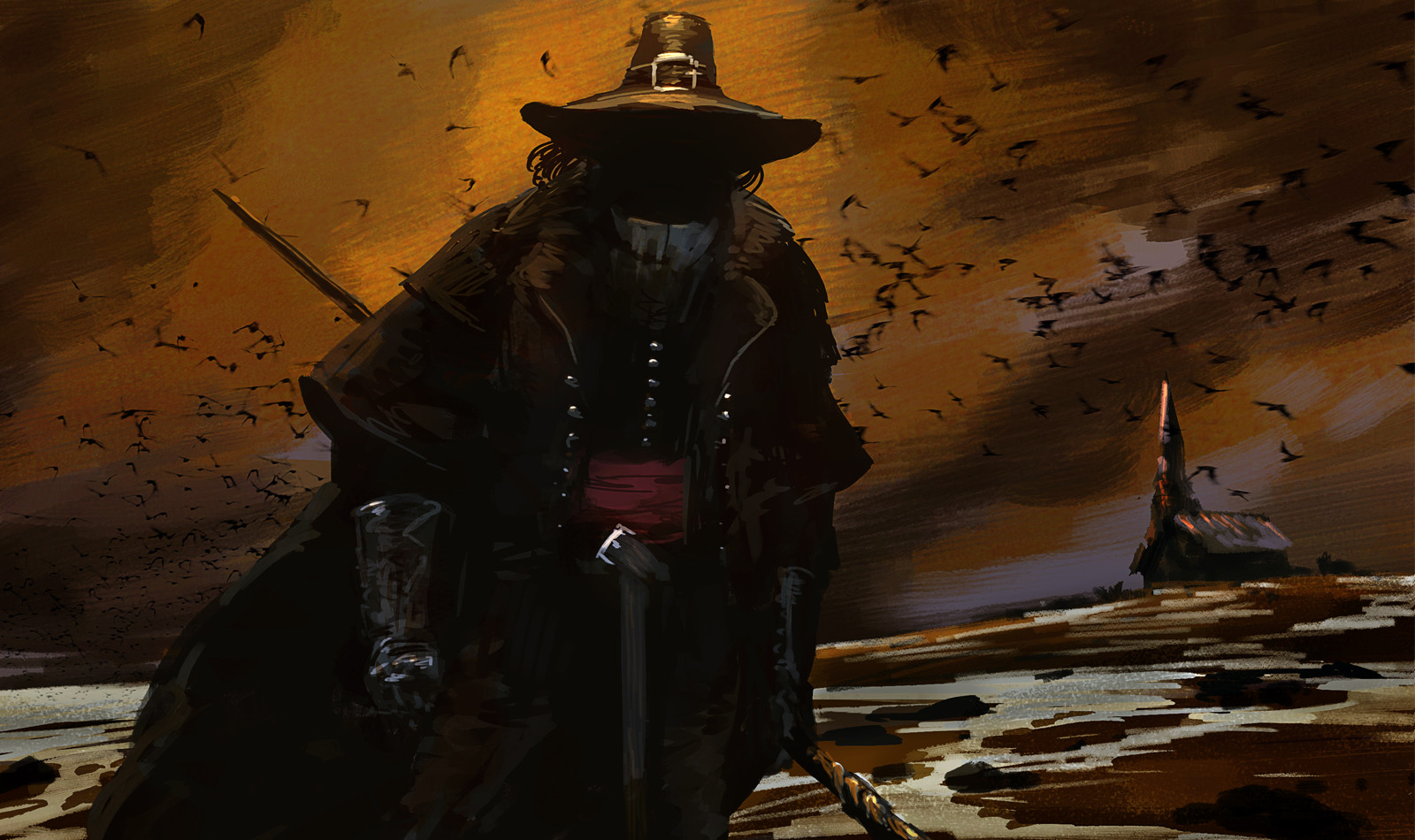