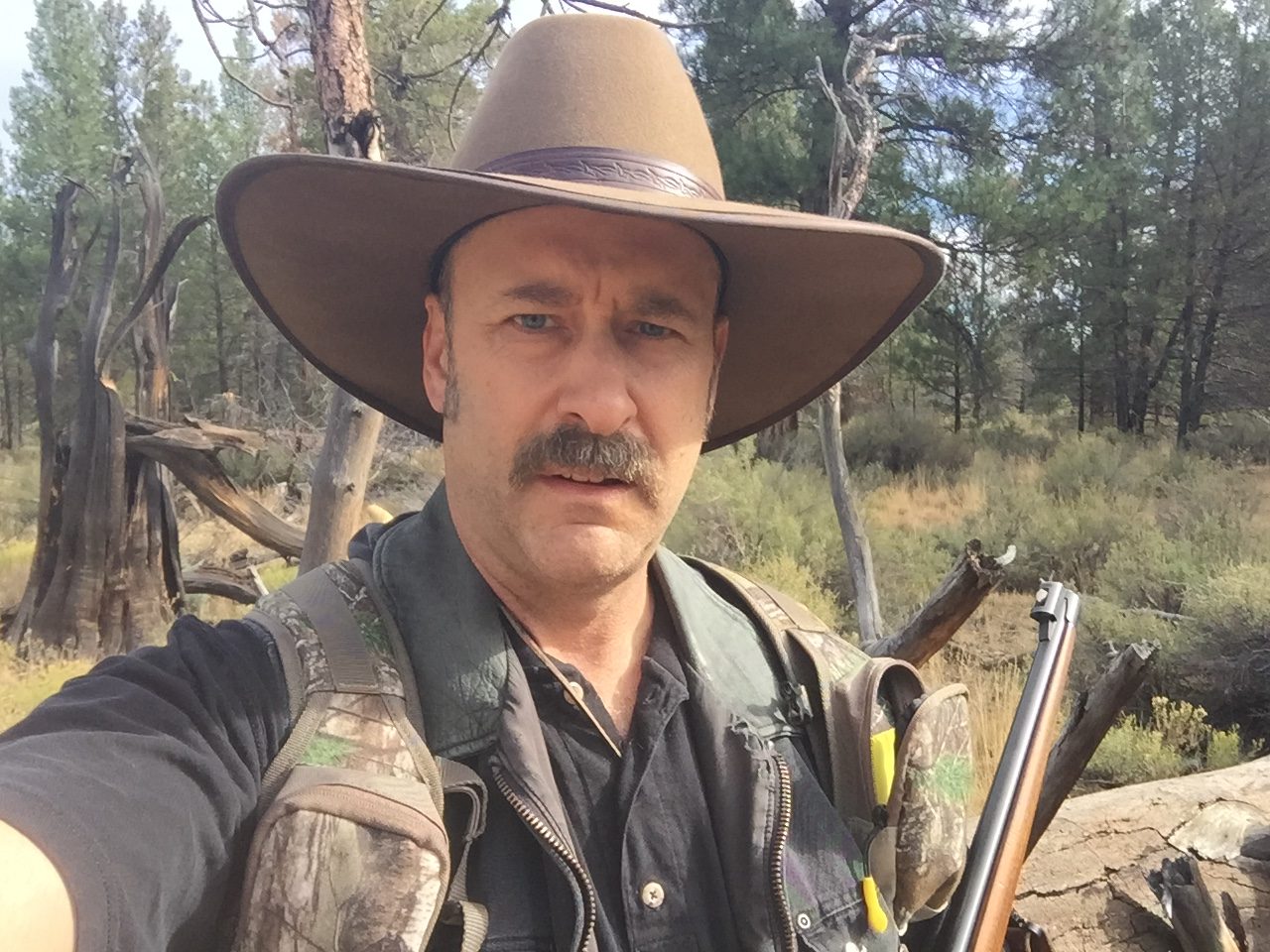 There’s nothing particularly special about the woods out back of Zimmerman Butte. It’s all second-and-third-growth ponderosa forest, with a heavy understory of bitterbrush, cross-hatched with logging roads. There are no vistas to speak of, and other than a couple of rock formations, no exceptional terrain features.

I started hiking out there when we first moved to Sisters back in 1993 because it was handy — I could reel off five or six miles and then adjourn to the cinder pit on the butte for a shooting session. Out of that habit, I’ve spent hundreds of hours in that stretch of forest and have come to know it well. The spirits of two of my dogs, Cody and Cheyenne, still run and play out there, chasing rabbits, squirrels and each other.

And, of course, all of that does make the place special.

“The Shooting Woods” as Ceili called the area when she was little, have become a kind of retreat for me. Troubled in mind and heart last Saturday, I donned my new kilt (more on that at another time), hoisted the pack, my rifle and walking staff and set out for a few hours of blessed solitude, followed by a rigorous Frontier Partisan Biathlon. The nightcap was an evening of playing music at Cork Cellars Wine Bar.

Not to put too fine a point on it, the last half of the summer sucked. With the exception of a number of very fine Anvil Blasters gigs, Summer of 2017 can kiss my ass. We lost most of it to choking smoke from the Milli Fire and a host of other fires across the West. We were evacuated for five days, which was an unwelcome disruption and expense, though we are partially covered by insurance.

Let me tell you folks, waking up most every day for six weeks with the taste of ashes on your tongue and living under a thick pall and an eerie, bloody orange light begins to weigh on a man.

Smoke as thick as a London Fog forced us top cancel the Sisters Folk Festival, a decision that felt very much like putting your dog down: You know it’s right and necessary and it abrades the soul to do it.

The fires weren’t even the start of it. At the end of July, Marilyn earned herself a nasty scalp wound from a fall while in California for a family wedding. The emergency room staff botched the staple-and-suture job so badly that our doc up here was appalled (we’re demanding absolution of the bill). When he removed the staples, the wound fell apart, leaving a crater the size of a nickel and a quarter-inch deep in the top-back of Marilyn’s head.

Good thing that neither Ceili nor I is squeamish, because we spent days packing the wound with saline-soaked gauze, letting it dry, then ripping it out. Marilyn says it wasn’t terribly painful, but it was an extremely uncomfortable sensation that triggered an autonomic nausea response. She developed an attraction-repulsion relationship with tales of scalping survivors, with which I am well supplied.

She’s all healed up and none the worse for wear, but none of that was fun.

I have also been feeling acutely the frustration of worthy projects delayed and deferred due to circumstances beyond anybody’s ability to control.

And, then, of course, we’re in the midst of a significant moment of transition, one that is fraught with emotion. Sending Ceili off to college is bittersweet — we’re a tight little Clan, and we’ll miss her acutely. Luckily, Marilyn and I like each other right well and we’ll be fine in our empty nest.

One of my favorite spots in The Shooting Woods is an area about 100 yards long and about 50 yards wide, a corridor where a dozen big pondos and a couple of junipers lie where they crashed to the earth in a massive blow-down. Can’t say when, exactly — we’ve had a couple of epic windstorms in my time here — but it seems plain that the trees came down all at the same time; some broken off, some ripped out at the roots. Something in the terrain — something I can’t discern — must have channeled and amplified the force of the wind in that particular spot, for the blow-down is concentrated all in that small area the size of a football field. The sound must have been an otherworldly shrieking, roaring and crashing. I wish I had witnessed it. 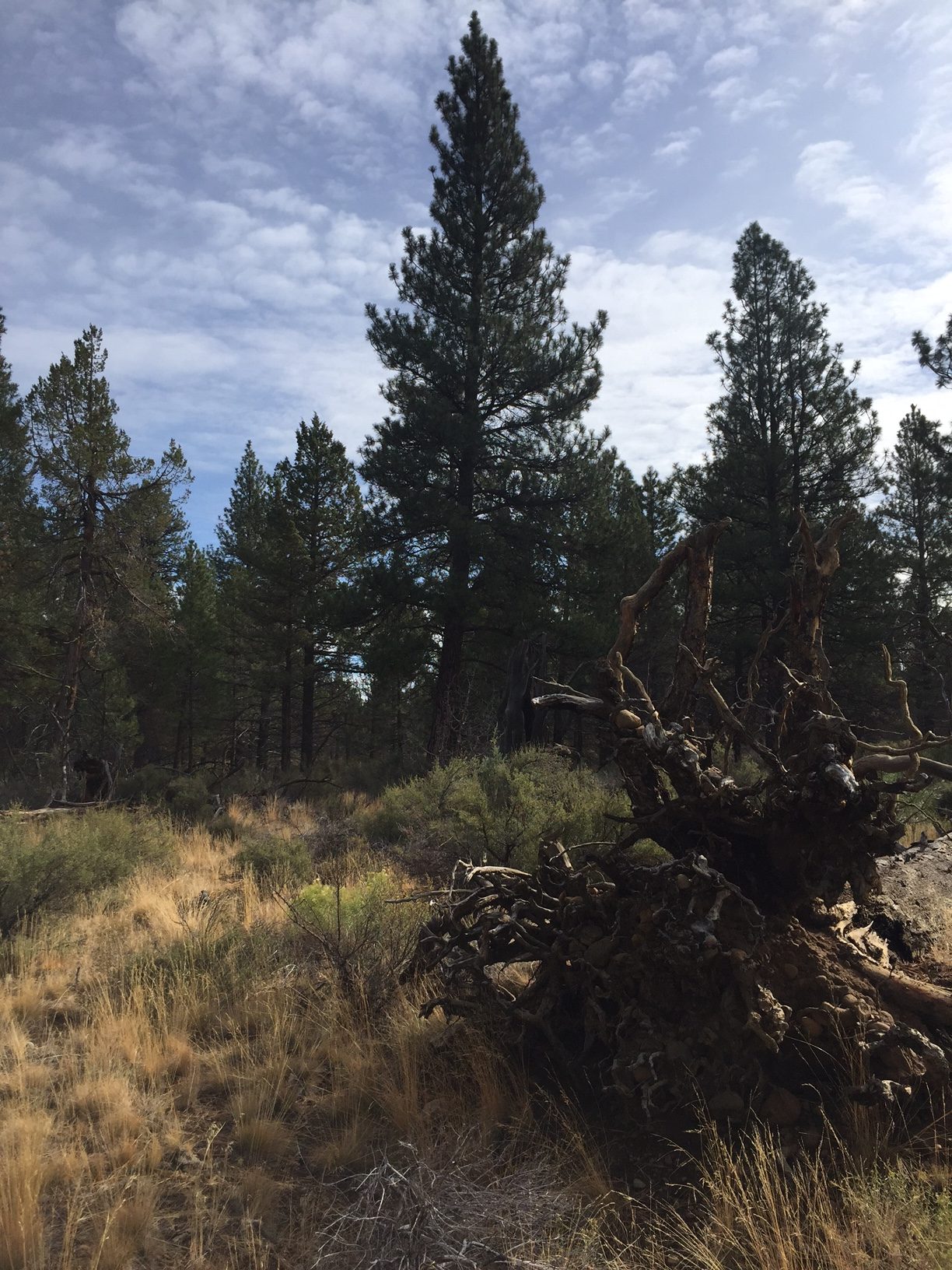 I find the Big Blow-Down fascinating and I stop there often to contemplate the carcasses of giants that fell in the face of an irresistible force that came out of the west and scythed them down in moments.

The Big Blow-Down is a microcosm of the destruction wrought in the Caribbean by winds of scarcely imaginable force, in Texas by floodwaters of Biblical scope, in Mexico by the violent shaking of the earth, which seems to be determined to buck off its putative “masters.”

Comfort and serenity are elusive and illusive. Strange and wonderful is the paradox that recognizing that stark reality in the woods on an autumn afternoon brings… comfort and serenity. Troubles? I ain’t got none.