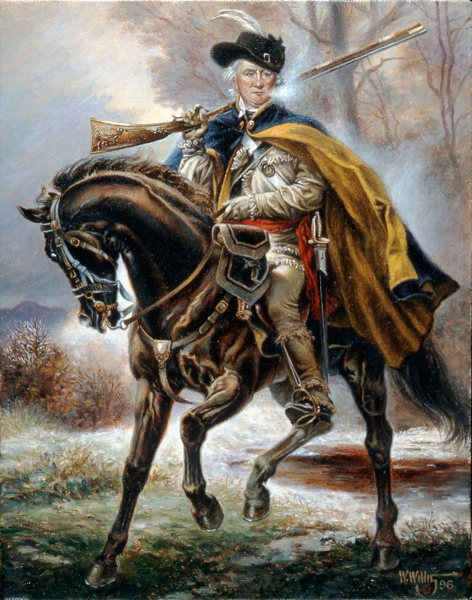 The wagon boss of a British supply column sprang up from the ground, grabbing a British officer by the throat. Other Redcoats swarmed the contractor, taking him prisoner. A civilian simply did not violently grab a British officer! His penalty: 500 lashes — 300 on the spot, 200 the next morning. Such a thrashing would have killed most men. But Virginian Daniel Morgan was a backcountry frontier badass. After six weeks recovering, Morgan joked that they’d miscounted: He only got 499!

Morgan was born in New Jersey of Welsh ancestry in 1735. By his late teens he’d made his way to frontier western Virginia and his own freight hauling business. He also displayed the unruly backcountry behaviors of the time: a fiery temper, fighting, drinking, gambling, womanizing. The 6′ 2″, 220-pound Morgan was “loud, profane, uncouth, overbearing.” And the above mentioned 1754 incident left Morgan with an abiding hatred of the British Army.

Back at his home in Winchester, Morgan joined the militia and rose to be a respected leader by fighting off and chasing down Indian raiders. Upon the outbreak of the Revolutionary War, Captain Morgan took over a Virginia rifle company and marched 96 marksmen 600 miles in 21 days to join Washington’s army at Boston. Armed with the notorious long rifles of the frontier, Morgan’s Riflemen made an impact with their shooting. The rifles were more accurate than the common smoothbore musket. And Captain Morgan’s reputation grew as the fighting skills of his company were noticed. 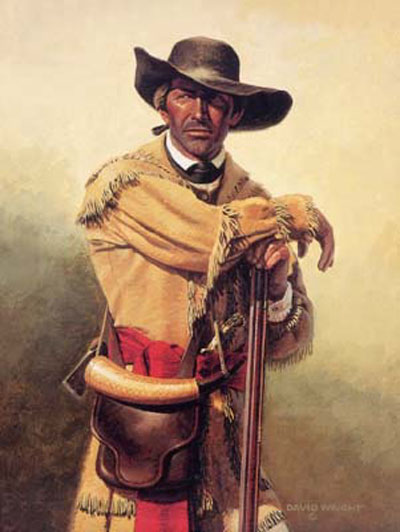 Artist David Wright captured the classic American Rifleman. Men like these, led by Daniel Morgan, made quite an impression on New England militiamen and British regulars alike.

After Boston, Daniel Morgan transitioned from frontier militia leader, untrained in military strategy and tactics, to Continental Army officer. Morgan’s Riflemen were attached to General Benedict Arnold’s expedition to Quebec. Morgan’s fighting in the North is outside the focus of this article. After fighting bravely, Morgan and his men were captured during the disastrous attack on Quebec and imprisoned. Treated well as an officer, Morgan eventually was released in an exchange of prisoners in January 1777. Promoted to Colonel for his leadership at Quebec, he reformed Morgan’s Riflemen, was involved in numerous engagements, and played a key role in defeating the British under General John Burgoyne at Saratoga — the most significant Patriot victory in the northern theater of the War.

Skilled as a combat leader and respected by his men, Morgan however had a problem: his frontier fighting skills could not overcome his backcountry persona.

“His gruff manner and social skills were considered inadequate for a general officer and he was bypassed for promotion to brigadier general.”

Suffering from back injuries and a leg wound, and blocked from promotion, Morgan resigned on June 30, 1779, and returned to Virginia.

But the British hadn’t seen the last of Daniel Morgan. Stalemated in the North, the British moved the War to the South. Upon learning of Patriot General Horatio Gates’ defeat at the Battle of Camden in August 1780, Morgan ignored his injuries and the politics of rank to join Gates at Hillsborough, N.C. Taking command of a corps of light infantry, Morgan finally received promotion to brigadier general on October 13, 1780.

General Nathanael Green replaced Gates on December 3. Looking for time to rebuild his army, Greene sent Morgan with 600 troops of Continentals, state regimentals, militias, and mixed cavalry to western South Carolina to forage and harass the British. Learning of Morgan’s march into the backcountry, British General Cornwallis sent cavalry and infantry under the notorious and despised Lt. Colonel Banastre Tarleton to chase down Morgan. What resulted was one of the great fights of the Revolution.

“Colonel Tarleton is said to be on his way to pay you a visit. I doubt not but he will have a decent reception and a proper dismission.”

Morgan retreated strategically, seeking appropriate ground for battle. And he’d been reinforced, with strength up to about 1,350.

The pursuing Tarleton has been described as “the antithesis of the backwoods frontiersman. He was smooth, glib, well educated, a marvelous horseman, an ideal cavalry officer.” In Charles Town, S.C., Tarleton’s “charm and sophistication” had led to “amorous successes among American lasses,” adding another reason for Patriots to despise him. The contrast between the commanding officers about to engage was stark and extreme.

Near Hannah’s Cowpens on January 17, 1781, Morgan found his place: “good defensive ground on slightly sloping, open grassy fields surrounded by woodlands.” Morgan’s placement of troops was “almost brilliant… three distinct defensive lines, each partially screening its successor.” This has a name: “Defense in depth.” The British had to attack progressively stronger lines of defenders. First, a strong skirmish line; 150 yards back, the main line of militia; at the crest of the slope, “five sixty-man Continental line companies,” with cavalry behind.

Morgan knew his adversary. His strategy proved perfect against the confident, impulsive Tarleton. As Morgan expected, after scouts came in contact with the partisans, Tarleton formed up his troops and attacked straight away. Readers are encouraged to read the fascinating battle details available in numerous publications. Suffice it to say that Morgan’s strategy worked almost perfectly. The aggressive Redcoats were sucked into the trap, and what’s known as “double envelopment” resulted. The Patriot cavalry played a key role. And even the elite 71st Highlanders were surrounded and surrendered.

It was a complete American victory, produced by Morgan’s “tactical masterpiece.”

Cowpens was just three months after the “Over the Mountain” frontiersmen defeated Loyalist militias under Patrick Ferguson at King’s Mountain. Now the morale of the Patriot cause soared again. Though not visible at that moment, the road to Yorktown almost was clear.

“The crude, backwoods saloon fighter had…bested a suave, intelligent, British-trained officer.” As predicted by General Nathanael Greene, Morgan indeed had provided Tarleton with “a decent reception and a proper dismission.”