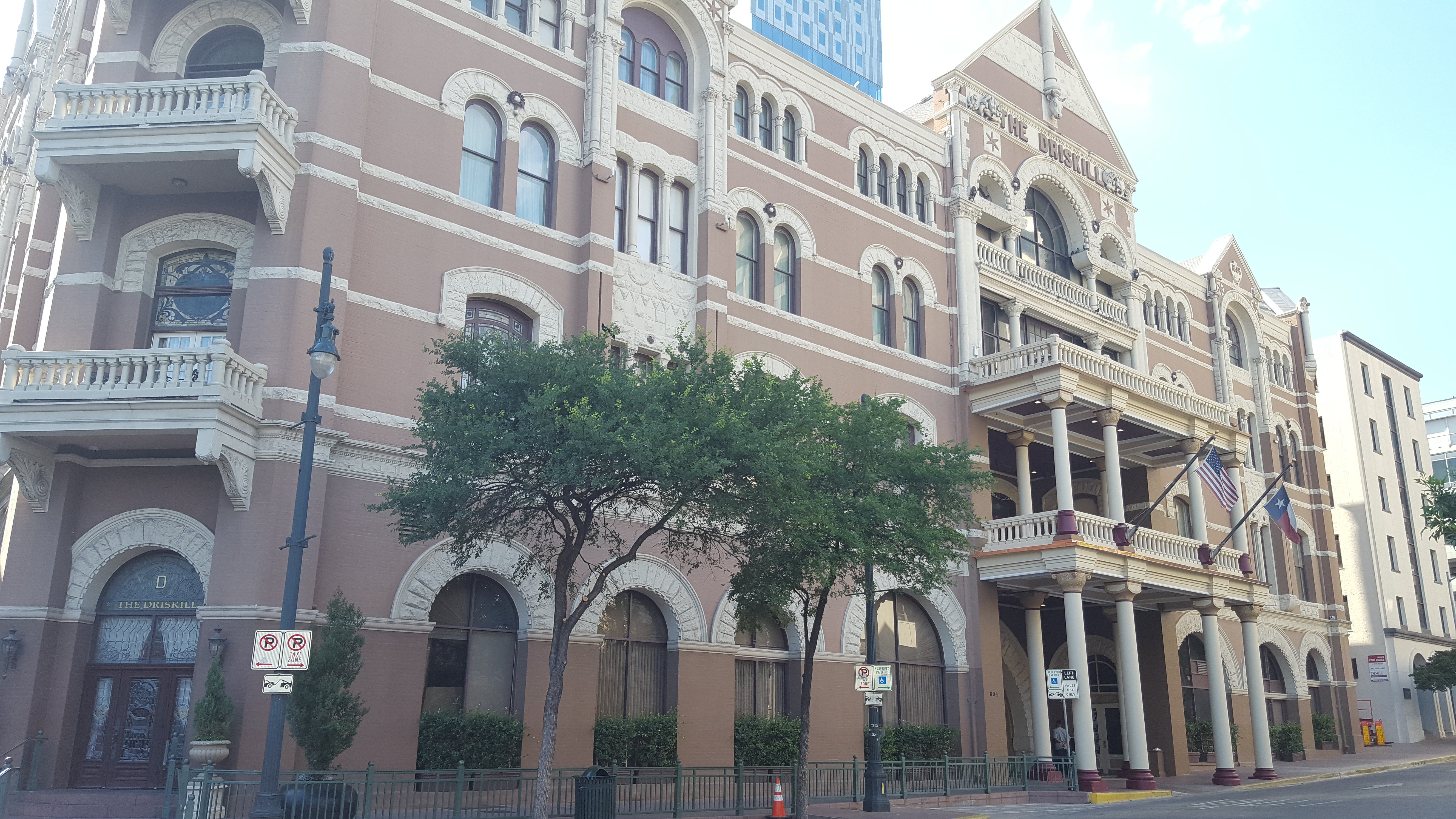 Eli McCullough, The Son of Texas, stands up out of his chair, steps around the table and behind one of his drinking partners. Responding to the insult he’d just received from the wealthy financier, McCullough pulls out a Bowie knife and scalps the man alive!

This shocking, stunning scene is a fantasy moment in the 2017 television series The Son, based on Philipp Meyer’s fine novel. And it takes place right in the dining room of Austin’s Driskill Hotel.

Quanah Parker had surrendered the last band of Comanches to the U.S. Army in 1875. Just a decade further on from that ending of 50 years of fierce battle between Anglo settlers and Plains Indians, builders were erecting an opulent, Romanesque Revival hotel in the capital city of Austin.

Tennessean Jesse Driskill, with family roots back to Ireland, settled in Bastrop, Texas — 30 miles down the Colorado River from Austin — in 1851. He went broke supplying the Confederate Army with beef during the Civil War because he was paid in Confederate Graybacks. Driskill did, however, gain the honorary title of “Colonel” for his efforts on behalf of the Johnny Rebs. 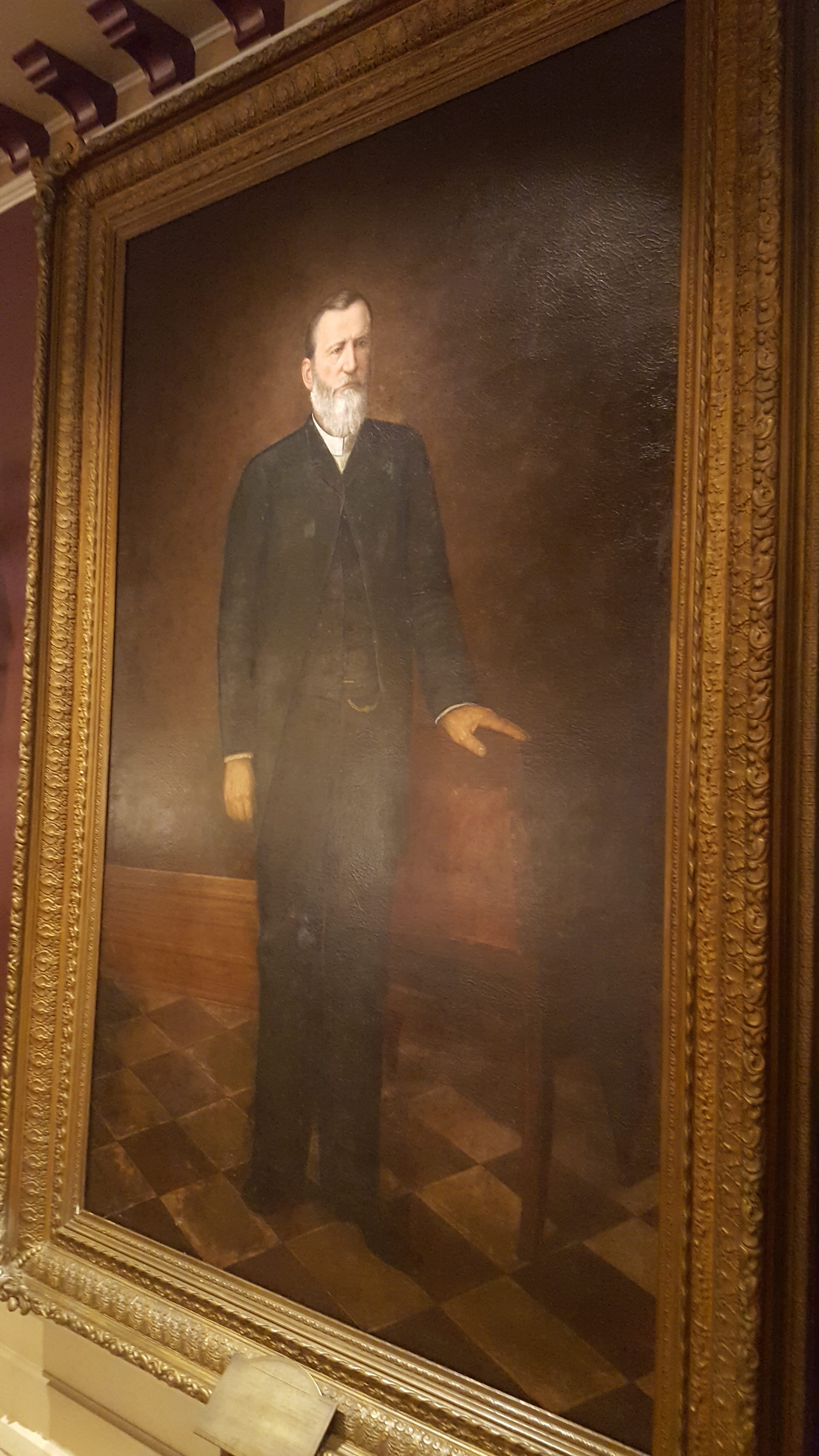 A portrait of “The Colonel” hangs at the hotel he built.

Through persistent effort Driskill rebuilt the business after the war, and drove his herds up the Chisholm Trial to the railhead in Kansas. The northern market for beef was big; and Driskill prospered into a successful cattleman.

The year 1871 saw Driskill move his wife, four daughters, and two sons up river to Austin. Continuing to expand his cattle empire led Driskill to the wealth of a cattle baron. And he wanted to make a further mark: To build the fanciest hotel south of St. Louis.

So in 1884 Driskill bought a city block at 6th and Brazos Streets for $7,500. Austin Architect Jasper Preston intended his Romanesque Revival design to be a classic of the style: “heavy, rough-finished stonework, squat columns, and broad, low, and massive archways.” This adaption of a European style “became truly Americanized, allowing for…interior space and form unlike that seen in American architecture…to that point.” The builders had The Driskill ready for its opening on December 20, 1886.

The first big event was on January 18, 1887: the Inaugural Ball of Governor Sul Ross — once a Texas Ranger who recaptured Cynthia Parker, who then became a Confederate General. The Driskill has hosted the Inaugural Balls of many Texas governors since.

Such an opulent hotel needed to charge high prices to make ends meet. A room with a meal cost $2.00 to $5.00. But Austin was still a frontier town. And the going rate at modest hotels was 50 cents! With customers not flocking to the Driskill, plus losses in the cattle markets, Driskill had to close the hotel in May 1887.

Then, “according to legend, he…lost the hotel in a game of poker in 1888 to his brother-in-law, Jim ‘Doc’ Day….” Such poker stories abound in the West. Your author has met a woman in Montana whose grandfather supposedly won their ranch in a Great Falls poker game. Legend and truth may not jibe. But it’s great to think it’s true.

Reopened later in 1888, the Driskill underwent $60,000 in renovations when purchased by Austin businessman George Littlefield in 1895.

Thirteen years later, April 16, 1908, was an infamous day at the Driskill:

Williams was able to return fire with a pistol, hitting Dowell twice in the legs. Amazing, both survived their wounds satisfactorily. One wag has commented, “Sadly, the sport of lawyer shooting never quite caught on in these parts, and Austin is the poorer for it.”

A momentous meeting occurred in the Driskill in 1934:

“In the spring…Frank Hamer and a group of Texas Rangers took a room…. They stayed all of one day and…into the night, meticulously planning what would…become the successful ambush and killing of the…outlaws Bonnie Parker and Clyde Barrow.”

The Driskill was Lyndon Baines Johnson’s Austin hotel of choice. He dated and proposed to Claudia Taylor — “Lady Bird” — in the Driskill. As President it became his Texas “headquarters” when not at the ranch outside Johnson City. This included Election Night 1964 and his big win over Barry Goldwater.

By the late Sixties decline had set into the venerable Driskill. “Fortunately, some concerned citizens…raised…a couple million dollars to spend on a renovation. In 1970 the hotel was designated as a State and National Landmark.” After a big reopening in 1973, the Driskill has undergone renovations every decade since.

And, as seemingly required of old Texas hotels, the Driskill is said to be haunted. Two jilted brides who committed suicide, a little girl who fell down the stairs, an ex-30 year resident, and, you guessed it: Colonel Jesse Driskill himself.

A visit to the Driskill is a special treat. This article required on-site research, so the author and his bride, Field Research Associate Marcia Desy, arrived early on a Sunday evening. We admired numerous Texas-themed paintings on the way in, including a large one of “The Colonel” himself. And “The Celebration,” depicting that Inaugural Ball of Governor Sul Ross. 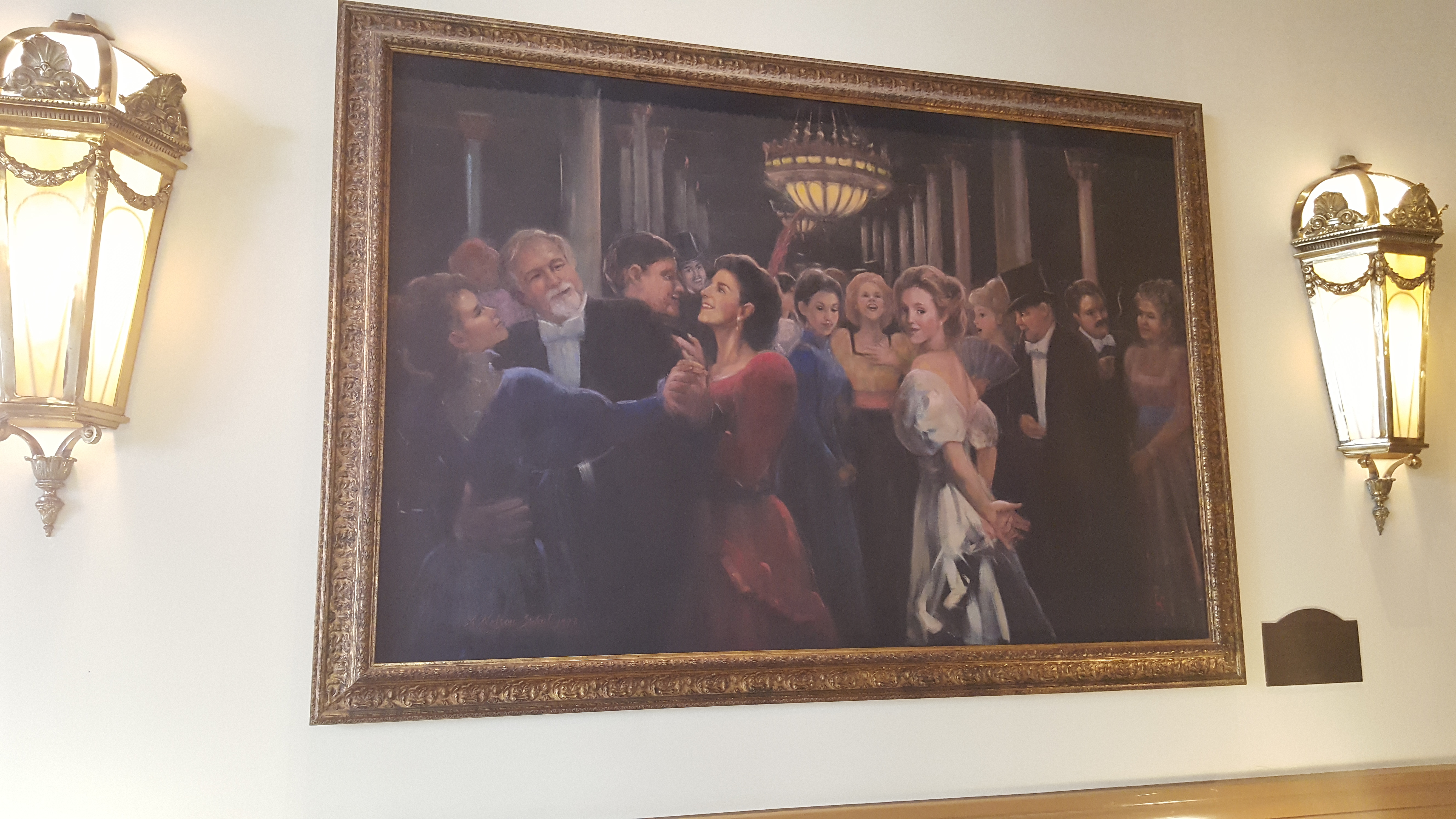 The bar and lounge are large and elegant. On most weekend nights they are very crowded. But on Sunday evening the place was moderately populated, quiet, and exceptionally pleasant. We sampled several Texas-themed cocktails. Ms. Desy favored the Bluebonnet; the author liked the Texas Revolver with its Texas bourbon prime ingredient. We discussed spending a night in the future, hoping to catch a vision of one of the ghostly spirits. But for that Sunday evening we drank our fill, then walked out into a softly pleasant Austin spring evening. 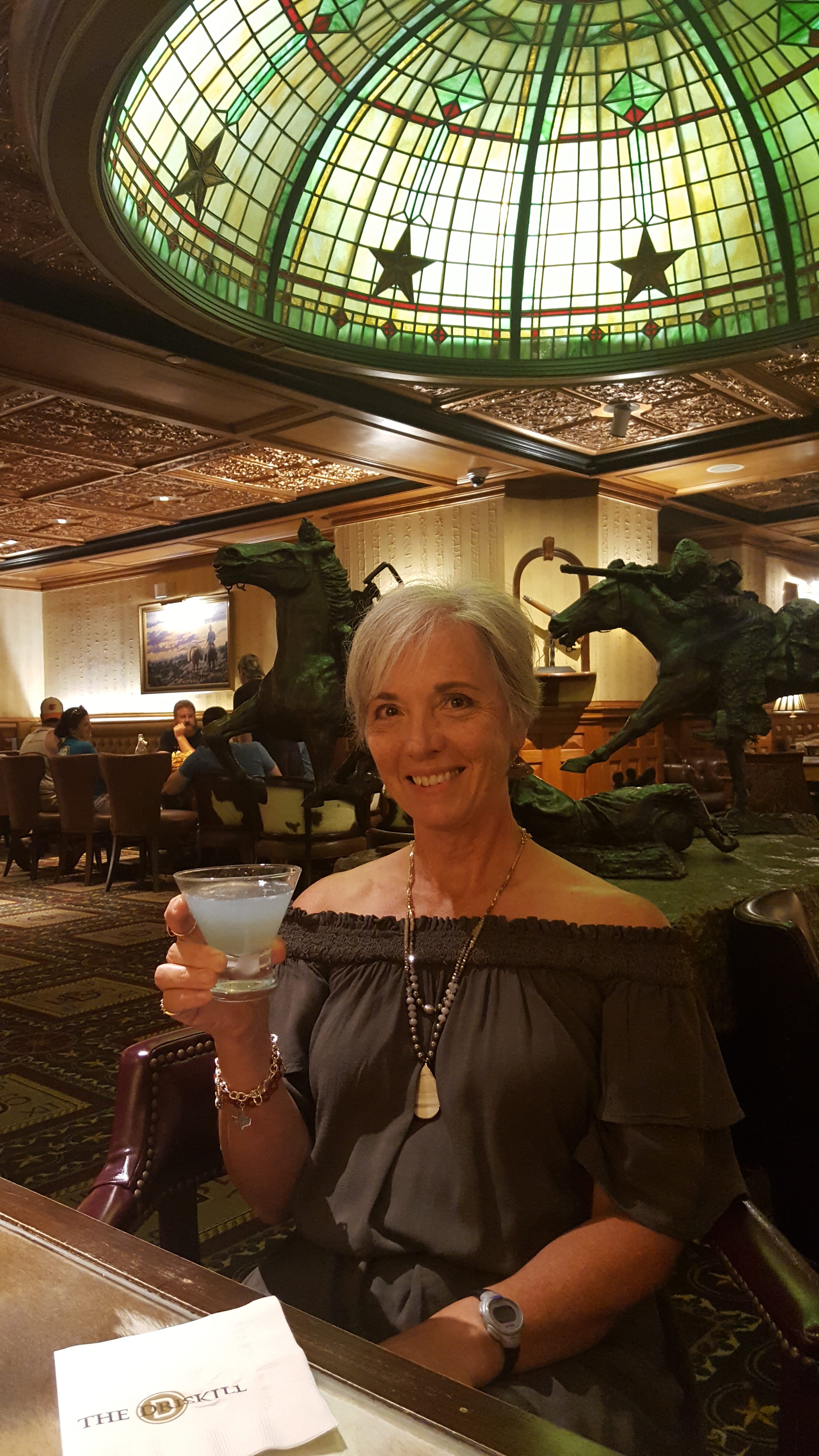 Field Research Associate Marcia Desy at the Driskill. Research can be arduous. 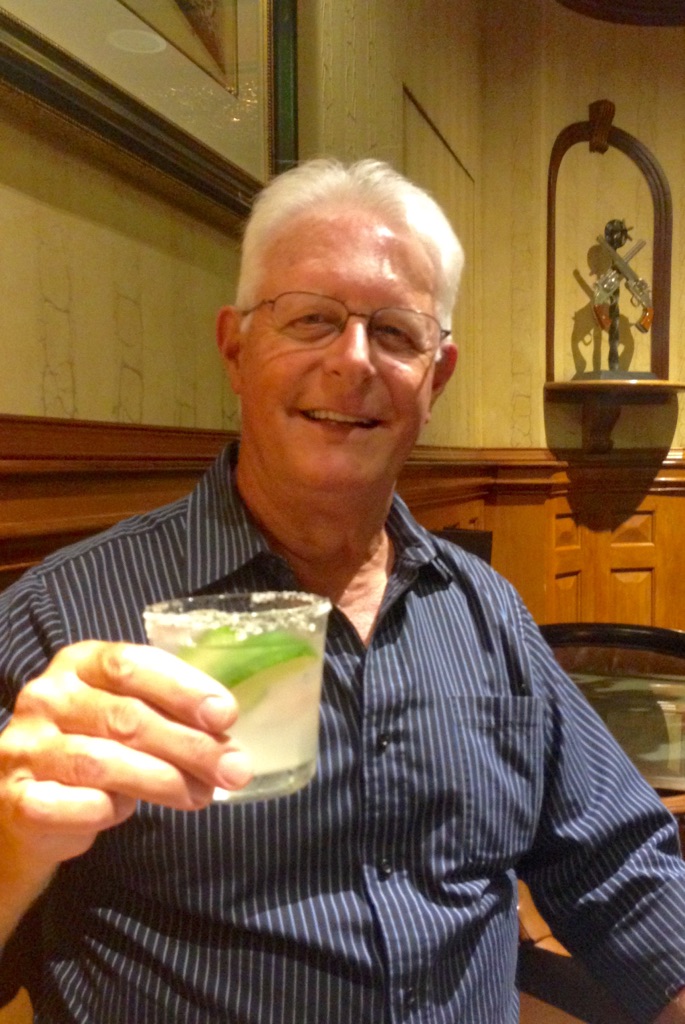 The author toasted the Colonel with a Texas Revolver and, in this case, one called The Colonel.

The Driskill – the prime jewel of Austin!

© by Rick Schwertfeger, used by permission

Previous Post: « I’m Just Glad I Wasn’t Born No Later Than I Was…
Next Post: Ridin’ The Range And Actin’ Strange »