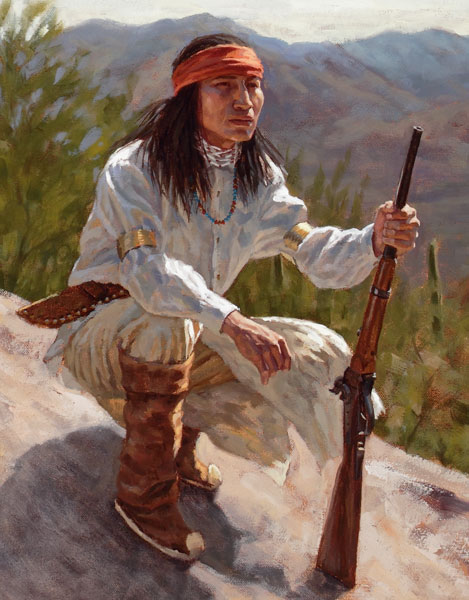 Time to raid your bookstore for a copy of Paul A. Hutton’s “The Apache Wars.”

If you haven’t yet picked up a copy of Paul A. Hutton’s The Apache Wars: The Hunt for Geronimo, the Apache Kid, and the Captive Boy Who Started the Longest War in American History, it hits the stores in paperback today.

I know I throw out a lot of reading, but this one TRULY is not to be missed. Whether you’re looking for an introduction to the subject or are a longtime scout along the winding and dangerous paths of borderland history, this is really a must read. It’s simply a great book. “Masterpiece” is chucked around too freely, but Hutton’s book really is one. The history is nailed down, the analysis cloverleafs in the X-ring, and it is a damned fine read. A feast of succulent mule, a tizwin drunk, more fun than a raid on a Mexican rancho.

Here’s what I said about it when I downloaded and read it a year ago:

Why cover this ground again? You mean besides my generally compulsive nature? Hutton is an ace writer, for one thing. He’s one of several narrative historians who, over the past couple of decades, have mastered the art of writing thoroughly, deeply researched history as story. His account of Lt. Bascom, Cochise, and Cut-the-Tent is the best I’ve yet read. He’s got Geronimo’s number, which is a credibility test as far as I’m concerned. And I love the focus on the enigmatic Mickey Free, one of those marginal men, the ones caught between cultures, who walk a crooked and narrow path just trying to find a way in the world. I love those guys.

Hutton is unflinching in the face of the horrors and terrors of the conflict. Nobody fought clean in this long, grinding guerrilla war. The U.S. government was duplicitous in its dealings with the Apaches; the Mexican government was treacherous and brought decades of terror on their own heads through their employment of brutal gangs of scalp hunters; the Apaches themselves were prone to horrific tortures, and wreaked their vengeance for wrongs committed against them indiscriminately. They simply did not care — culturally — whether those upon whom they slaked their revenge were innocent.

Hutton avoids the trap of portraying the Apaches as mere put-upon victims of Manifest Destiny. He gives them agency in their own world and lets them stand upon their own feet, actors in their own tragedy. Tigers of the desert; warriors to the end.

In a recent press interview he said, “This is hard-core warrior stuff. To me, the Apaches are the Vikings of America and there is no reason to make apologies for who they were. These were not a sedentary people. They were raiders.”

This is serious history, well told, with empathy and yet with a hard and unforgiving eye. That’s a tough thing to pull off, and it makes “The Apache Wars” a crowning achievement in a distinguished career.

Hutton’s been killing it with the awards for a year and with good reason. 2016 was an exceptionally good year in Frontier Partisan history (I might, ahem, mention, my own Warriors of the Wildlands: True Tales of the Frontier Partisans…) and The Apache Wars is the pick of the litter.