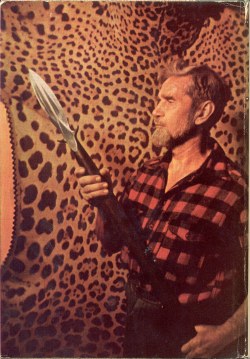 This one is for our spear-wielding compatriot Lane Batot — a tribute to a modern-day hunter who’s specialty was battling (and that’s the right word) South American jaguars with mankind’s most venerable weapon. Talking about the great Sasha Siemel.

I’ve never got much south of Mexico in my frontier explorations. Probably need to rectify that, as South America has a great deal of vivid frontier history to explore, along with some of the wildest country on the face of the earth. Like most folks, when I think hunting I think Africa. It was reading one of Peter Capstick’s books on African hunting that first introduced me to the story of Sasha Siemel. Capstick jumped the ocean to the Brazilian outback for Sasha’s story, because it’s just so damn badass. Latvian kid takes off at 16 in search of adventure and becomes the great white hunter of the Brazilian outback. He was a handsome, picturesque fellow, too, which never hurts. While he was famed for battling the big cats with spears, he was also a skilled hand with a gun, from double rifles tothe short-and-handy Winchester Trapper Model 94 to the classic Smith & Wesson revolver.

Safari Press reprinted his story in Tigrero! and the publisher’s backgrounder on Siemel provides a lot of information:

Sasha Siemel was a figure of monumental importance on the American hunting-world stage of the 1930s,’40s,’50s, and ’60s. He was unique not only as a hunter but also as a man. He is the only known white man to have fought the fierce jungle jaguars of Brazil with a spear, and as a man, he made a stand for decency in everything he did. This was a man who believed in the ideals of freedom, adventure, honor, family, home, and courage-ideals he upheld throughout his life.

He was so famous in his day that he appeared in advertisements, cartoons, Hollywood films, and even in a full-feature article in The New York Times. That NYT article included multiple photos of his bag of many jaguars and other game! (Can you imagine the NYT today saying anything positive about shooting a coyote?) He also wrote a very long piece for National Geographic in 1954. Again, can you imagine NG allowing a hunter today to write of his exploits? His fight against Assassino, the name given to the much-feared man-eating jaguar that killed his mentor, was published in Life and Reader’s Digest in the mid-1950s. From 1930 to 1952, Sasha was featured in Time magazine seven times. He published his autobiography, Tigrero! in 1953.

Alexander “Sasha” Siemel hailed from Latvia, which he left when he was sixteen to seek an adventurous life abroad. He first landed in Chicago, where he learned English, and then he immigrated to Argentina to join his brother. Once in South America he found a job as a mechanic, but he was soon drawn to the vast wilderness of the Mato Grosso. His dream was to become a jaguar hunter in the endless grasslands and marshes of the Pantanal, where big game flourished and where courteous Brazilian ranchers pursued rugged lives.

He sought out and eventually found Joaquim Guató, a native reported to be an expert tigrero, or jaguar hunter. Guató fought jaguars armed only with a spear, and he passed on his knowledge to Sasha before he himself was killed by the man-eating Assassino. Sasha proved a highly capable apprentice, first hunting jaguars with a rifle and later with a spear. Over time he became the most successful hunter of jaguars in the history of South America, and it is reported that in his long career as a jaguar hunter, Sasha Siemel engaged in thirty-one victorious spear fights against these ferocious beasts. 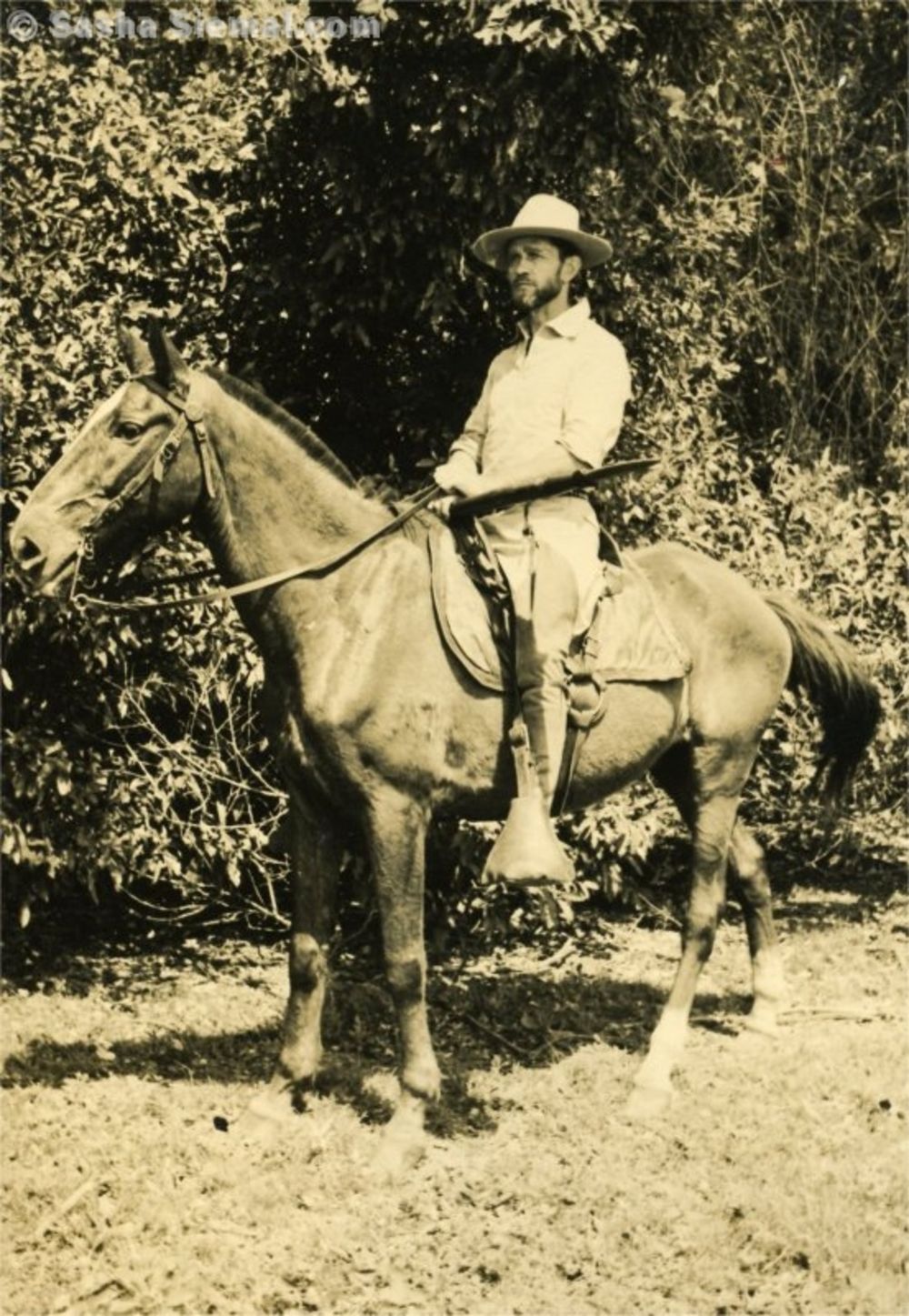 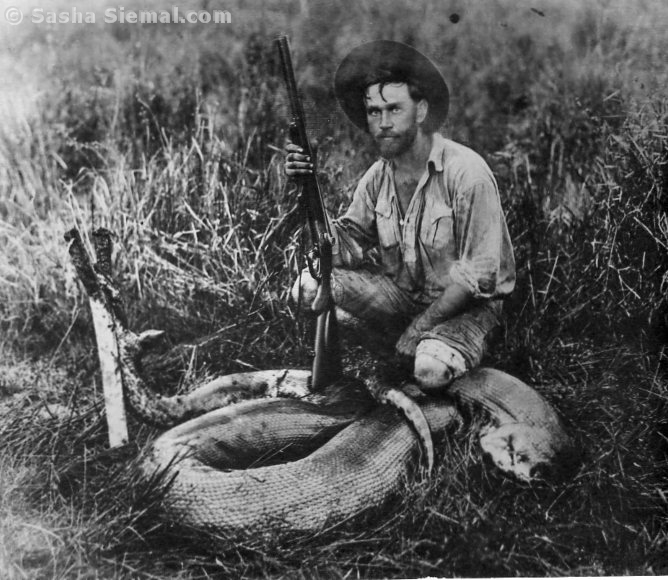 In the early 1930s, Sasha realized that he wanted more than just a solitary existence, and he felt the need to tell others about the Mato Grosso and his experiences there. So, when he was in his early forties, he began touring the USA extensively. He held lectures and presentations, and at one of those talks he met and eventually married Edith Bray, an American from Philadelphia. He continued to lead expeditions and hunters into the “green hell” of South America. Among these were Theodore Roosevelt Jr., Roosevelt’s nephew Kermit, Julian Duguid, Mamerto Urriolagoitia (President of Bolivia), dignitaries, and business titans. Sasha Siemel continued his life of hunting, leading expeditions, and giving lectures well into the 1960s . . . long after most people would have retired. (He died in 1970 at the age of eighty.)

It is often said that Mother Nature did not create the wildlife of South America with the big-game hunter in mind, but there is one exception to this adage-and that is the jaguar. In making the jaguar, Mother Nature made up in spades for what the continent lacks in big game (when compared to Africa). No other large cat on earth is as difficult to hunt as the jaguar, and there is likely not another hunt as dangerous or as exciting as hunting this great feline with a spear. Sasha Siemel hunted the mighty jaguar for nearly fifty years. Tigrero! tells the tale of his extraordinary hunting career.

Like Frederick Courteney Selous, Sasha Siemel lived a pretty close to ideal life — man of action, man of letters, the right alternations between the wild and the civilized. 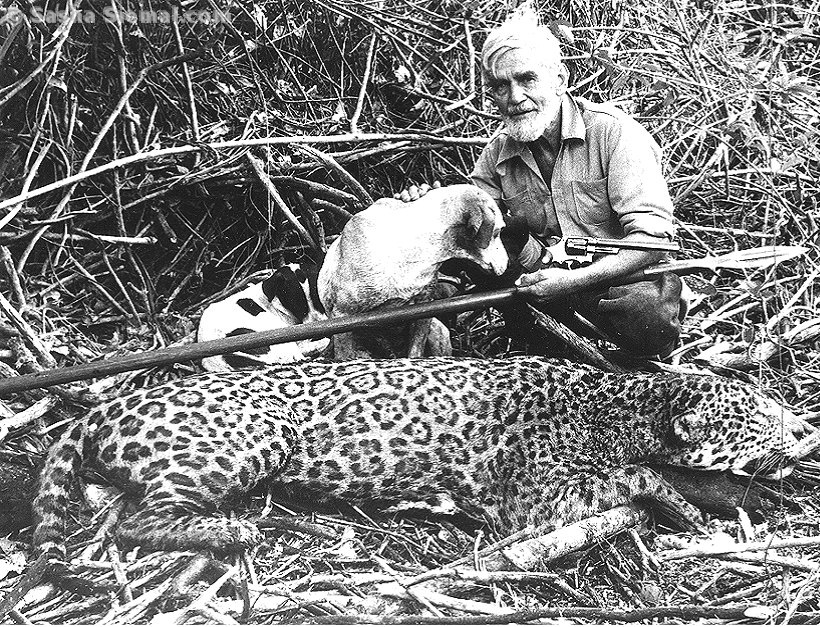 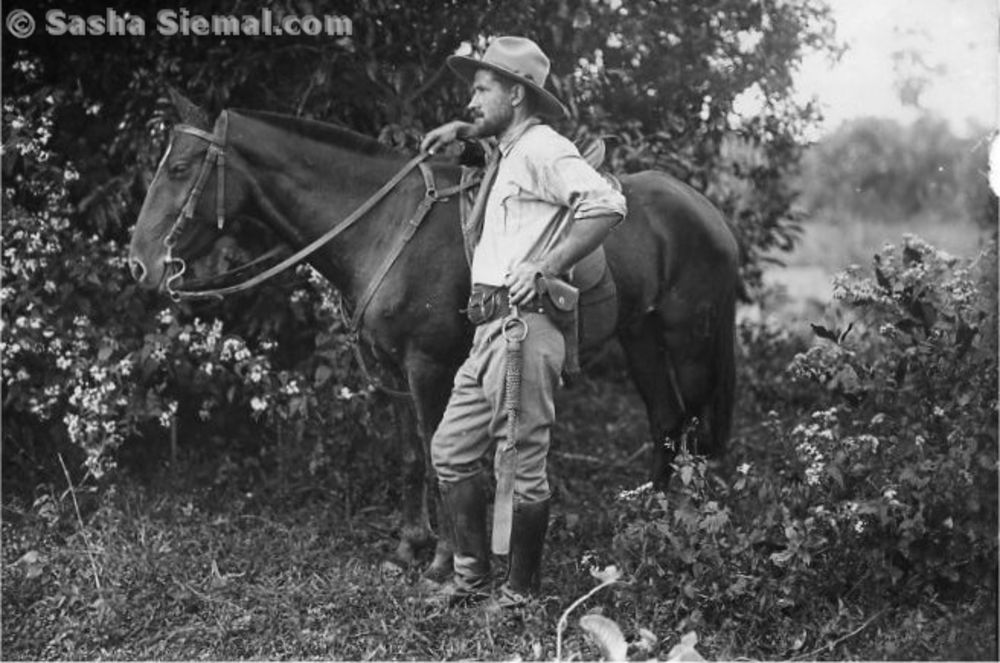 Previous Post: « A Feast Of Succulent Mule, A Tizwin Drunk — A Damned Fine Read
Next Post: The Scottish Marksman Who Might Have Won The American Revolution »