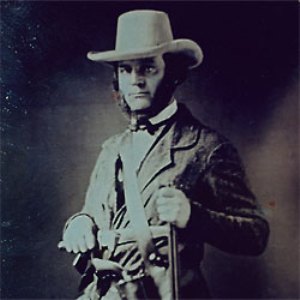 Back in the mid-19thCentury, there was no creature on God’s green earth more full of piss and vinegar than a South Carolinian. The cantankerous bastards took on the whole U.S. in 1861, firing on Ft. Sumter and unleashing four years of hell with the doors off. They just weren’t to be trifled with, by the Eternal!

A whole gang of goldfield cutthroats learned better than to mess with a gent from South Carolina on December 19, 1854. That’s when Captain Jonathan R. Davis, late of the Palmetto Regiment in Mexican War service, undertook what to my way of thinking is the finest act of tactical ass-kickery ever accomplished by a civilian.

Captain Davis and two companions, one James C. McDonald of Alabama and a Dr. Bolivar A. Sparks of Mississippi were walking down a trail in Rocky Canyon on the north fork of the American River in California’s El Dorado County when they were set upon by 14 ruffians. The assailants were a mixed crew of the lowest kind of goldfield scum: Americans, Mexicans, a Frenchman and some Australian louts of the genus Sydney Ducks. The outlaws had been on a spree, robbing and murdering several Chinese and American miners.

They charged Davis’ party, guns a-blazin’. McDonald fell dead at the first fire. Dr. Sparks managed to get off a couple of shots before falling critically wounded. That left only Captain John R. Davis, which turned out to be more than enough.

Though he later said that he was “in a fever of excitement at the time,” he must have been one of those men for whom the game slows down when the action gets hot. For he stood his ground with a pair of Colt Revolvers and one after another he put the attackers in the dirt.

After the initial fire, which put down several of his assailants, four outlaws, at least two of which were nursing wounds from prior escapades, closed on Davis with Bowie knives; one wielded a sword. Big mistake. Davis drew his own Bowie, parried one thrust and stabbed the sword wielder to death. Then he disarmed another assailant with a stroke that severed a finger from his attacker’s right hand, followed by a backslash that took off the man’s nose. Two more miscreants went down before the South Carolinian’s slashing blade.

The remaining three robbers fled into the chaparral.

The whole business was witnessed by a hunting party on a nearby hill. They ran to the scene and almost got plugged for their trouble, as Davis dived for McDonald’s revolver. Recognizing the men as friends rather than foes, Davis took a moment to check himself for wounds. Aside from a couple of scratches and a hat and clothing riddled by pistol balls, he was none the worse for wear. He ripped up his shirt and used it to bind the wounds of Dr. Sparks.

Seven robbers lay dead, killed outright. Four would linger for a time before succumbing to their wounds. Davis and the hunters rifled the pockets of the dead men and Davis bade them give the booty to Dr. Sparks. Unfortunately, the good doctor would soon be past worldly goods; he died of his wounds some days later. Davis had the booty, which consisted of $491 in coin and several valuable watches, sent to the dead man’s family.

There were doubters and skeptics, of course. But when Davis invited them to visit his graves, none took him up on the offer. Finally, Davis and witnesses gave thorough depositions on the affair to The Mountain Democrat newspaper, and it was accepted that Davis had, in fact, committed one of the greatest feats of arms in history.

• “Gold Dust & Gunsmoke,” by John Boessenecker — a highly recommended history of the California Gold Rush Frontier, the most lawless and violent frontier in American history.